Film Room: Deonte Brown Has A Chance To Start In 2021 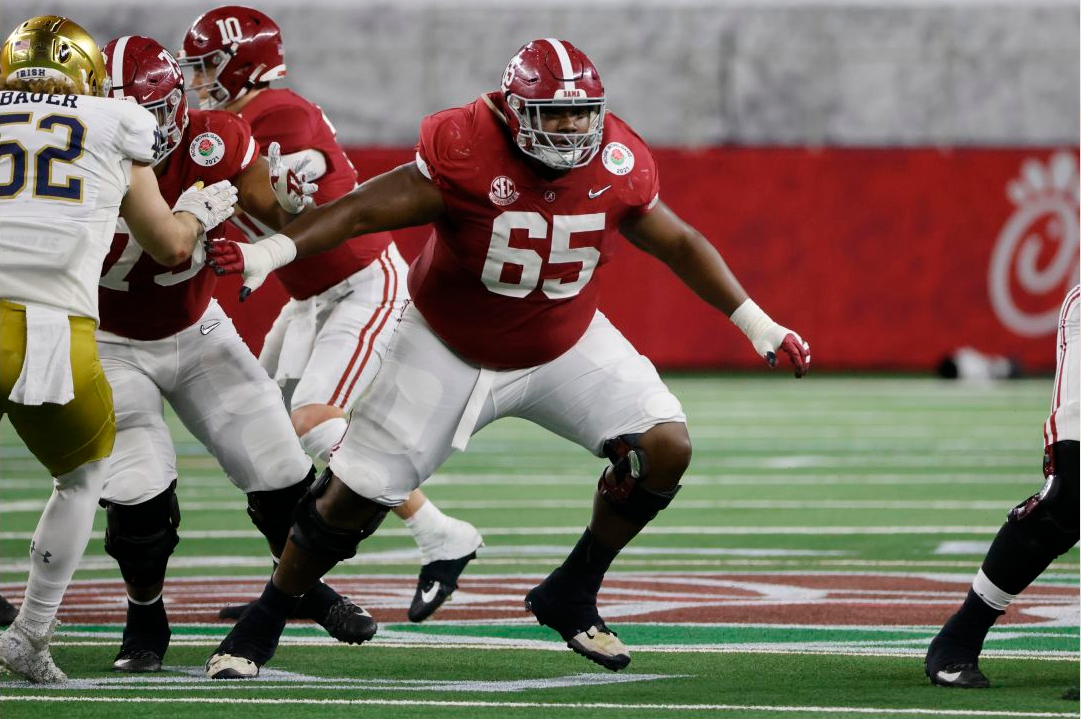 While there has been a lot on focus on the Panthers’ left tackle spot, and rightly so, the interior of the Panthers’ offensive line is far from a stable entity either. While Matt Paradis returns as center, both guard spots are likely to be open competitions in training camp, with one player who should be part of the competition at both spots is the Panthers’ first of three picks in the sixth round of the 2021 NFL Draft: Deonte Brown.

Brown certainly makes a big first impression, in that he is a very, very large man. He weighed in at 6’4 and 364lbs at the Senior Bowl, and while he was down to around 347lbs by the time he reported for rookie minicamp a little over a week ago, watching him on tape over the past two seasons it is fairly clear that he played much heavier in 2020 than in 2019, and the effect on his game was not a positive one. It should come as little surprise then that getting his weight under control is a priority for the Panthers’ coaching staff.

“I don’t think he’s going to ever be a 310-pound guy, that’s just not who he is, he’s a big powerful man” acknowledged Matt Rhule when speaking to the media during rookie minicamp, “We’ll take all that data over the course of this weekend in terms of how he moves then what’s his body fat percentage, what’s his power structure, we’ll put all that together and we’ll come up with an ideal weight for him. I would love it if he was in the 330s, but he might be a 340-pound guy.”

Off the field then, a major factor in whether Brown will be able to see the field early on will be his ability to get down to a weight that allows him to play at his best, but what exactly does his best entail and what impact did his extra weight have on his game in 2020? We’ve taken a look at the tape to find out. 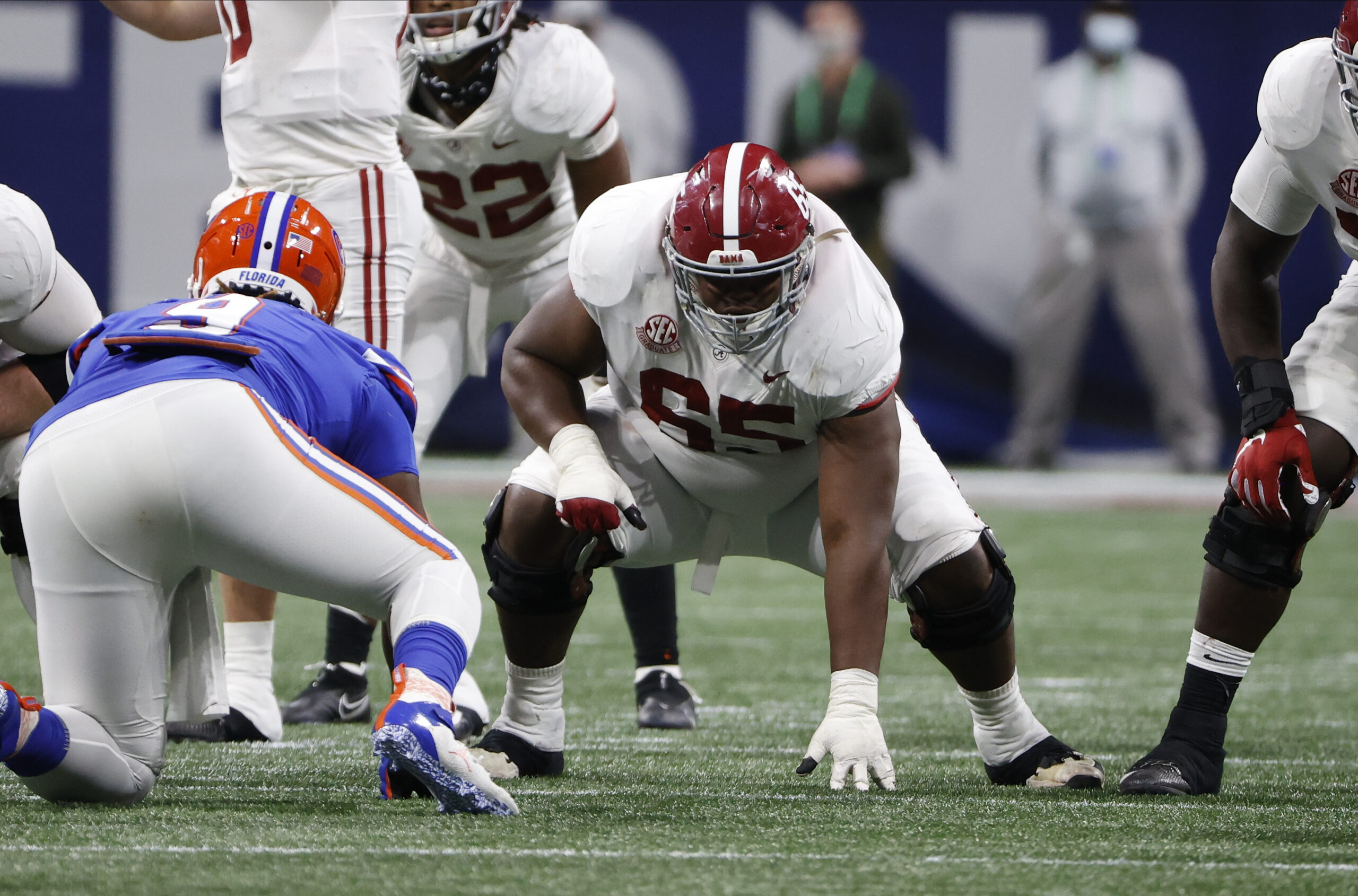 Speaking to the media following his selection, Brown detailed his approach when it comes to pass protection, “Just trusting my eyes because I have faith that my feet can take me anywhere and that has to move before my whole body can” explained Brown, “As long as my feet can cover the defender, I think that I’ll be in pretty good shape”

This approach really shows up on tape as well, where his excellent hand placement and strong arms mean that when he is able to get his hands on defenders it generally means the play is over (Brown played at RG against Auburn in 2019 and LG against Notre Dame in 2020):

Of course, this relies on him being able to cover the ground laterally with foot speed, and while he has shown an ability to do this effectively:

At times, especially in 2020, he appeared to run out of foot speed and agility:

While Brown is likely always going to struggle for lateral agility against the very quickest interior pass rushers, if he is able to get back to a better weight then he should have the quickness to be a more-than-capable pass protector in this regard.

Where he could also improve in pass protection is with his knee bend, as while this is generally good, he can sometimes get a little straight-legged as plays go on, which can lead to a narrowing of his base:

Which in turn can create issues recovering laterally:

Playing with better knee bend should also help to eliminate his occasional tendency of leaning into blocks, which can create issues with balance:

Overall, Brown is a technically very proficient pass protector whose value will depend on just how much of a limiting factor his lack of elite lateral agility turns out to be. This is definitely something that should be improved by his return to a more ideal playing weight but is certainly a facet of his game that the Panthers will look to probe throughout training camp and the preseason. 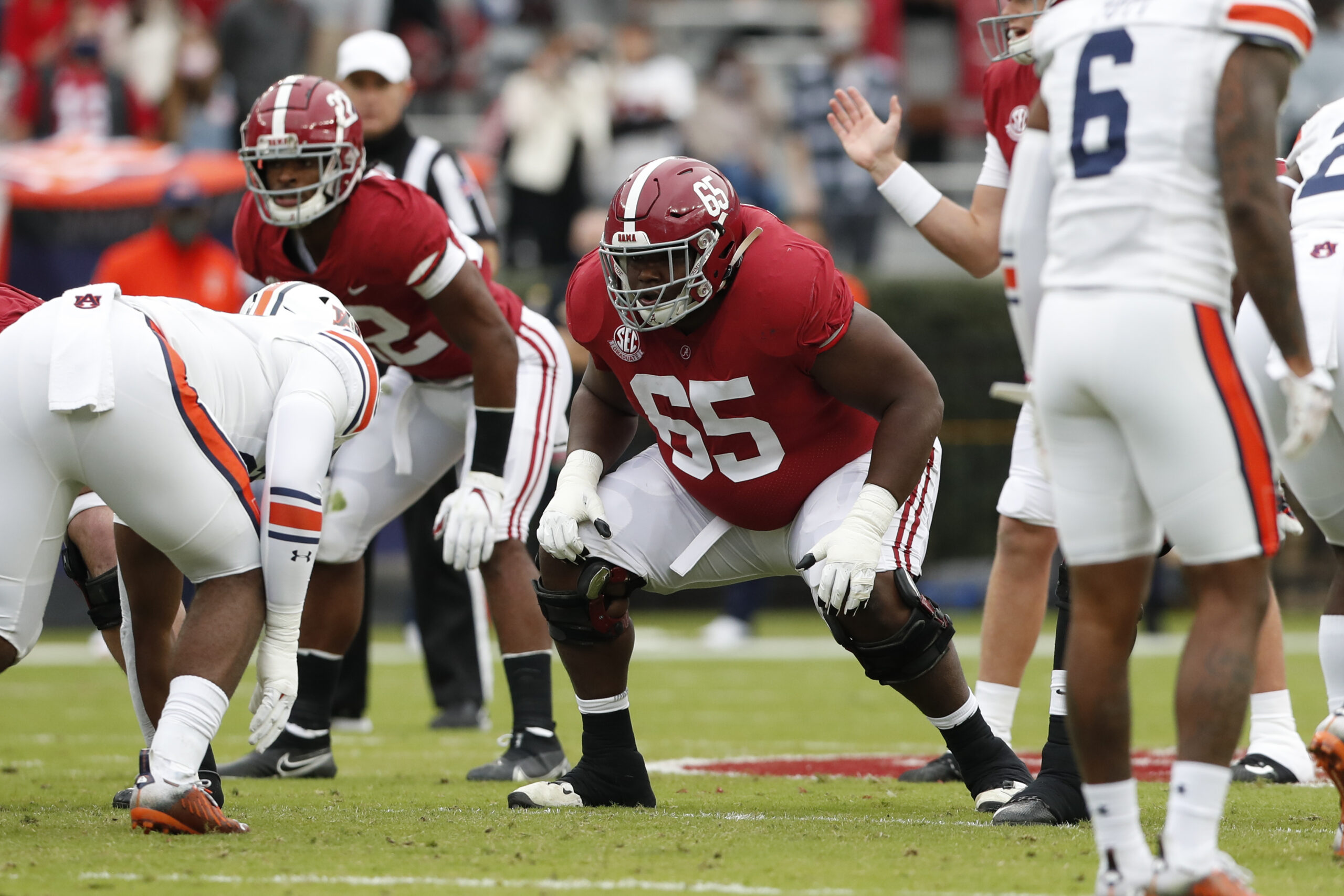 Unsurprisingly for a near-350-pound offensive lineman, Brown shows up in an impressive way in the run game, with the power to move defenders off the ball at the point of attack:

And while he doesn’t have the faster feet around, he does show some ability to work defenders into gaps as a directional blocker, something that is something the Panthers have asked their offensive linemen to do a lot of so far under Matt Rhule:

And as in the passing game, he does a really good job of locating his hands inside with the strong arms to control blocks, though he could stand to be a little more consistent with his arm extension:

Though as in the passing game he could stand to improve his knee bend further:

As this can again lean to both a narrowing of his base, which in turn creates issues with lateral balance:

And countering this higher pad level with waist pending creates issues recovering laterally and led to him landing on his face on a couple of occasions:

While it would be easy to pigeon-hole Brown as a mauler in the run game who is going to struggle to be effective in a more directional blocking scheme such as the Panthers, it is worth noting that he does show the movement skills to get out in front as a pulling blocker:

While still packing the punch to run people over:

Though it should be noted, in 2020 especially, his extra weight did appear to create some issues in locating blocks in space due to lateral agility limitations:

The version of Deonte Brown that played in 2020 is likely not a great fit with the Panthers’ rushing attack, and while playing at a lower weight in order to boost his quickness and agility should help his pass protection, if the Panthers are going to continue to ask their offensive linemen to work laterally and get out in space as pulling blockers then he should improve as a run blocker by playing at a lower weight as well, even if it comes with a slight loss in terms of his ability to maul people up front. 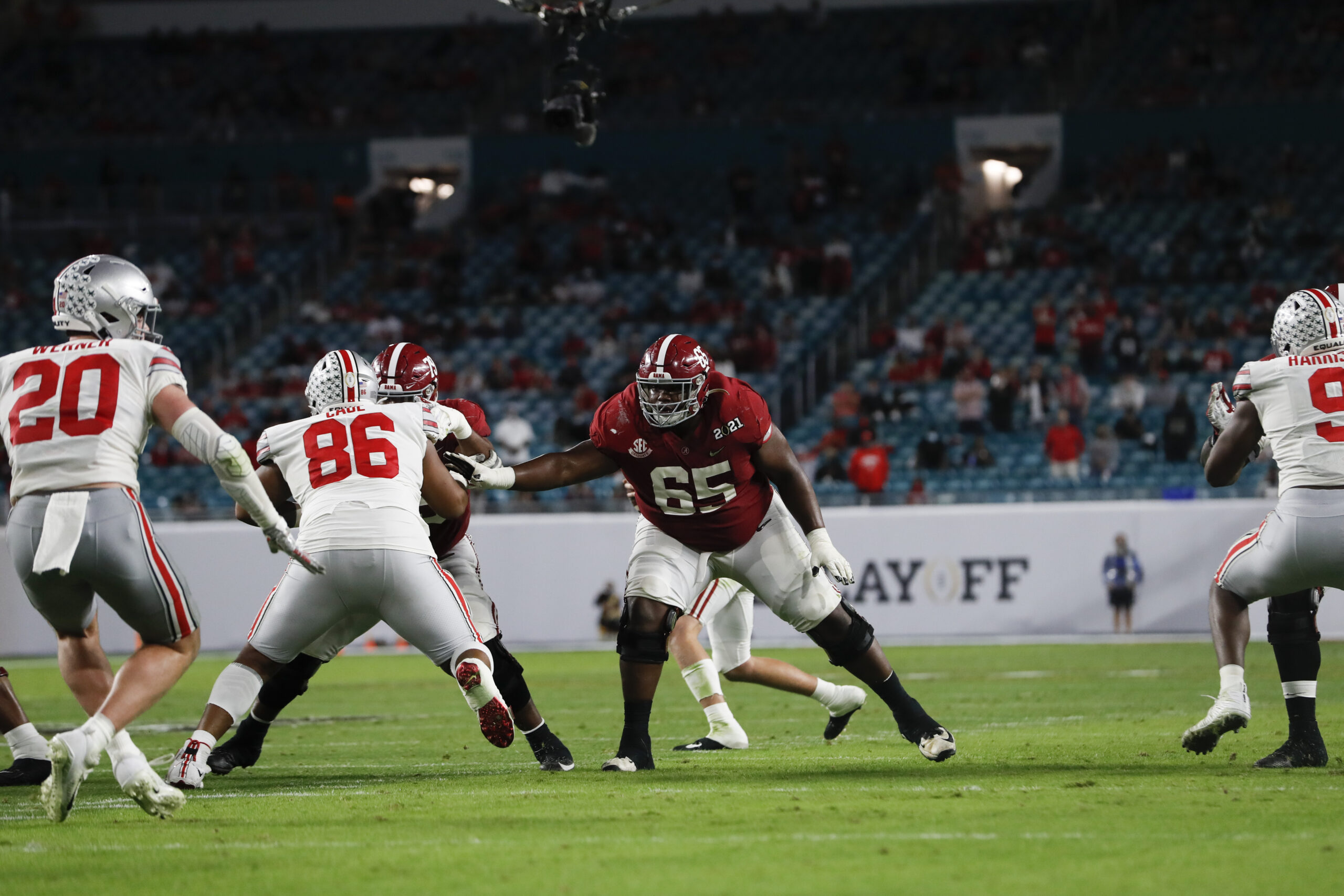 Overall, Deonte Brown is a player who does an awful lot of things well, but whose ability to see the field will depend on whether he is able to reach quickness and agility thresholds. If he can do this, he should have a chance to compete to start as a rookie, and while ongoing concerns about his ability to keep his weight under control are likely to have contributed to his draft-day fall, from a technical perspective he is right up there with any interior offensive lineman in the draft.

Matt Rhule has spoken a lot both about their focus on sport science and the culture he is trying to build in Carolina, and while it is ultimately down to Brown himself to do the hard work in losing those extra pounds, if the Panthers can give him enough of a helping hand for him to come in to camp at under 340lbs and stay there then they have a chance to get a quality starter out of a sixth round pick.