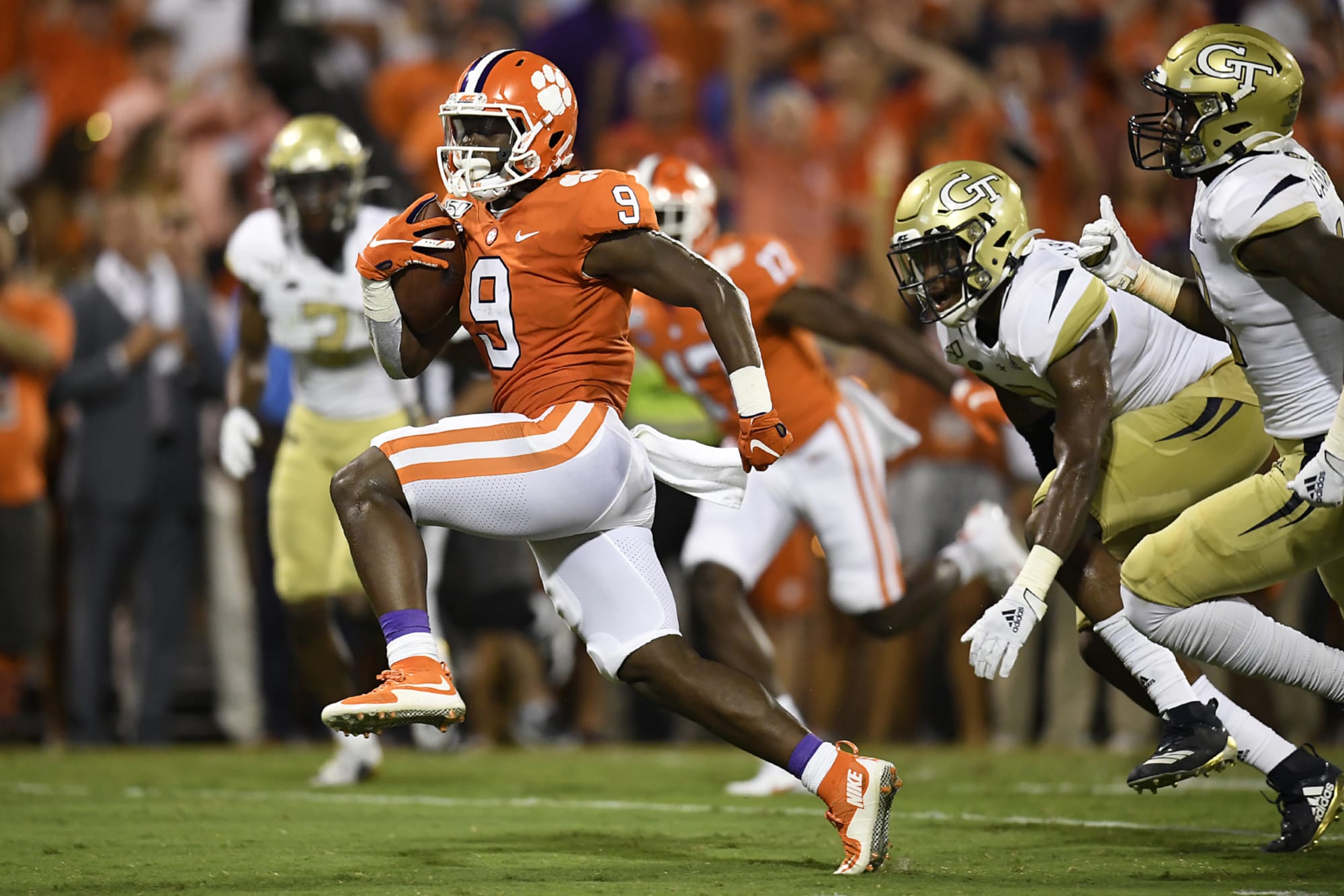 The Panthers probably aren’t going to go into the 2021 draft with running back as their top priority. Baring a spectacular offseason trade, Christian McCaffrey will return as arguably the top running back in football and they have a solid depth pieces in Reggie Bonnafon and Rodney Smith already under contract who can also add value as receivers either out of the backfield or from the slot.

However, the Panthers do have a couple of notable free agents in Mike Davis and Alex Armah, and while both players could be resigned, Davis might well opt for more money and crucially more playing time elsewhere, while Armah frankly hasn’t performed at a level for him to be viewed as a lock to make the roster even if he is returned. With that in mind, the Panthers could have some interest in running backs on the final day of the draft, especially ones who can offer a physical, downhill running style to compliment McCaffrey, with the ability to deputize as a fullback being an added bonus.

So, with that in mind, what does the 2021 draft class have to offer? 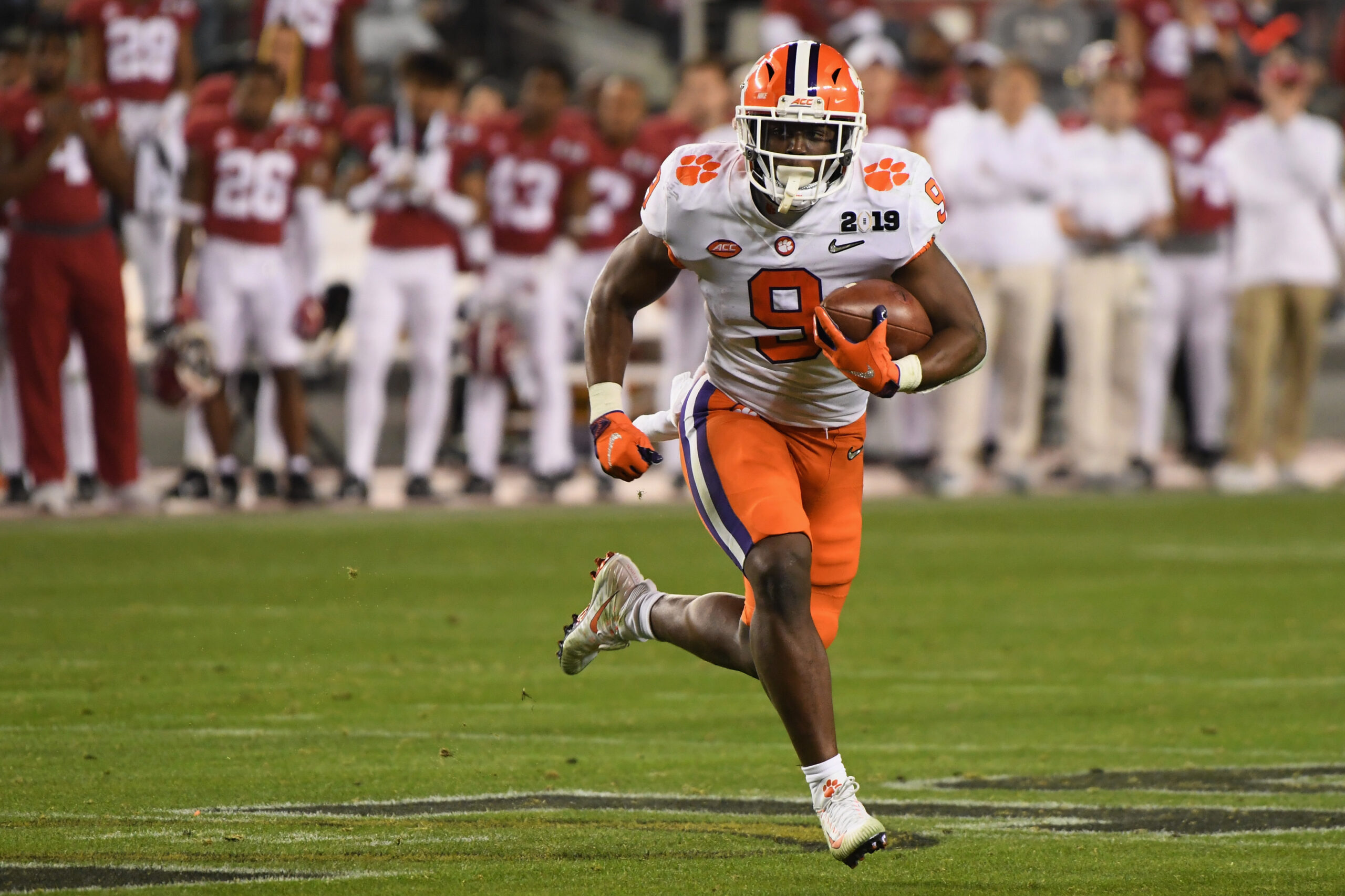 SANTA CLARA, CA – JANUARY 07: Travis Etienne #9 of the Clemson Tigers carries the ball against the Alabama Crimson Tide in the CFP National Championship presented by AT&T at Levi’s Stadium on January 7, 2019 in Santa Clara, California. (Photo by Harry How/Getty Images)

The Panthers aren’t going to draft Etienne, but he is worth mentioning because he is clear top running back prospect in the 2021 class and they will probably end up having to try and defend against him sooner or later, and this is unlikely to be easy task.

He is hugely athletic, with good quickness, deep speed, agility and contact balance, and while he isn’t going to truck linebackers in the A gap on a regular basis he breaks a ton of arm tackles with the ability to make a man miss in space as well. He does have a tendency to crash inside gaps even when bigger plays might come with a little more patience, and he doesn’t yet show a consistent ability to manipulate blockers to create leverage but he doesn’t make many mistakes when reading rushing lanes.

He also offers a lot of potential in the receiving game as well, as while his blocking technique is very much a work in progress, he catches the ball extremely well and flashes potential as a route runner in terms of changes of speed and direction, even if he needs to show he can apply this to a fuller route tree to be the very top tier of receiving backs. He isn’t going to be in Carolina barring something extraordinary, but he is likely to make some team very happy. 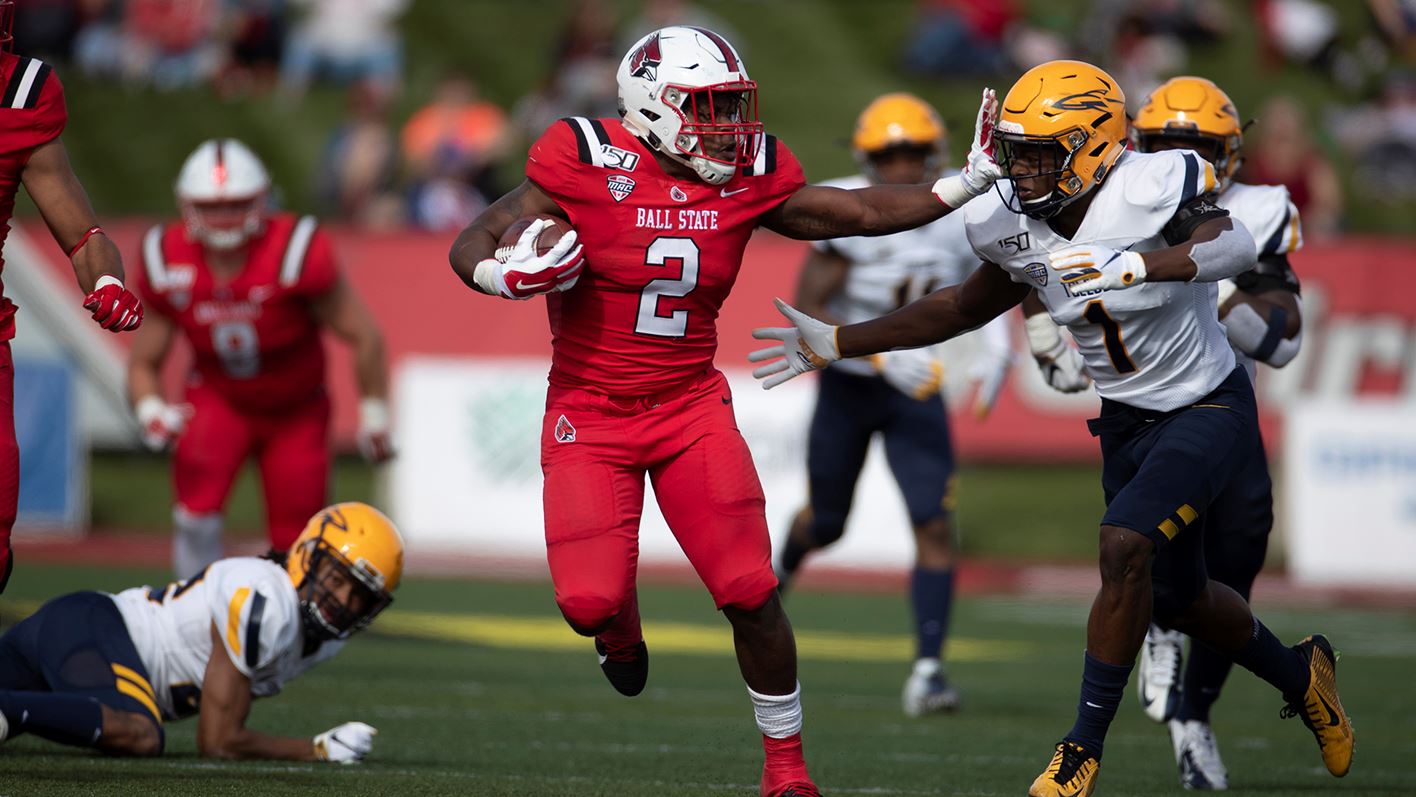 Huntley is probably the best fit with what the Panthers might be looking for from a stylistic point of view as he is a subtly powerful runner who changes speeds and direction well to avoid direction collisions and this, combined with his good contact balance, allows him to consistently bounce off tackles and drag the pile for extra yardage. He also shows a good ability to read rushing lanes and while he isn’t in the Etienne class of athlete he shows good quickness and deep speed, especially for his size.

Where he does need to prove himself is in the passing game as he wasn’t thrown the ball much, in part because of how much of Ball State’s passing attack was through RPOs and PAs where his value was to force teams to respect the run threat. With that said, if he can convince teams that he can be a reliable receiver out of the backfield then he offer the Panthers a power rushing carrier who also has the size and willing to also play some fullback here and there similar to how Mike Tolbert was used during his time in Carolina.

Huntley is likely a late round pick, with an outside chance that he might be available as a priority UDFA, and at that value he would be a useful rotation piece who can contribute at multiple positions. 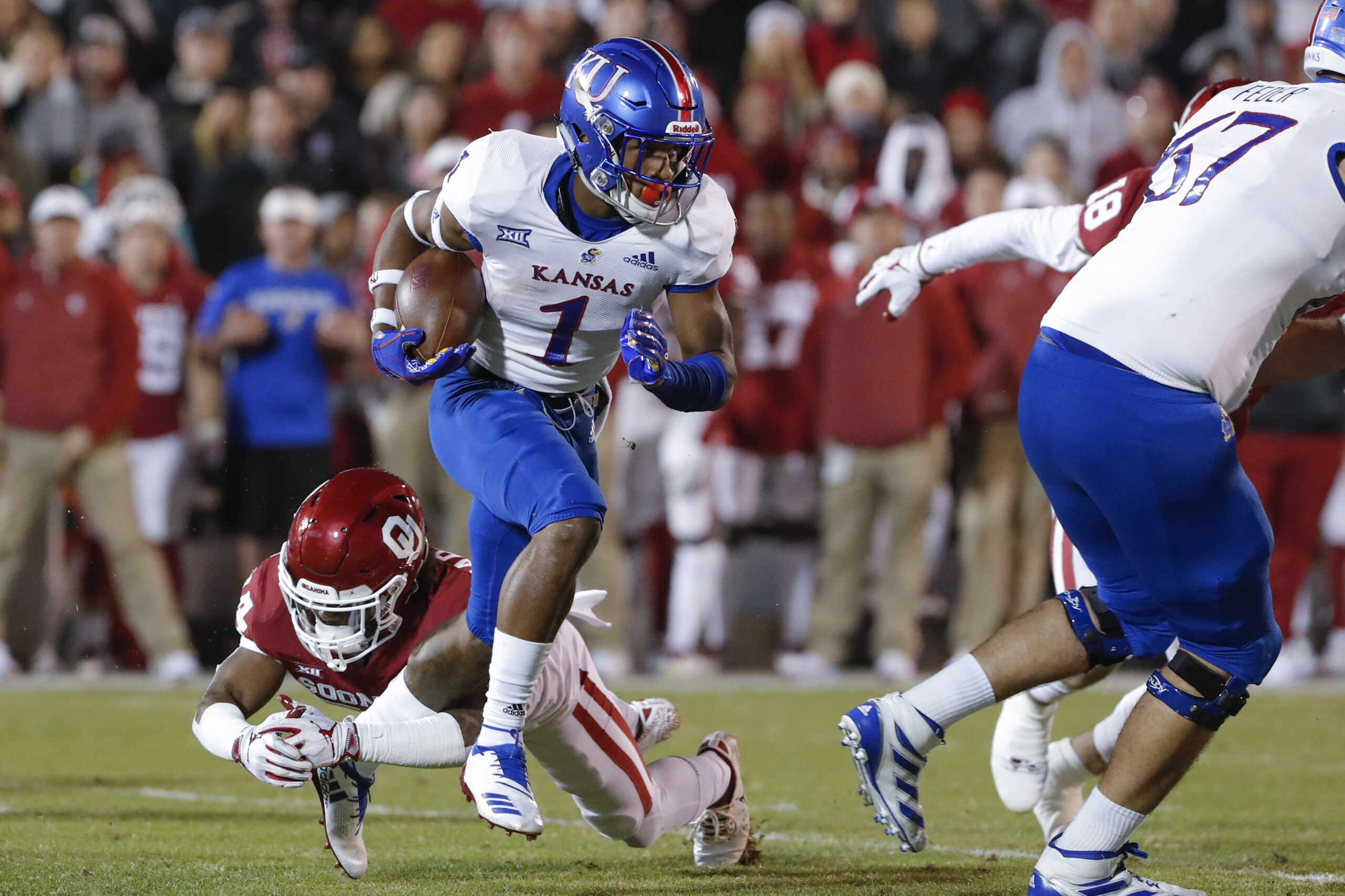 Kansas running back Pooka Williams Jr. (1) runs against Oklahoma during the first half of an NCAA college football game between Kansas and Oklahoma in Norman, Okla., Saturday, Nov. 17, 2018. (AP Photo/Alonzo Adams)

Williams is by far the most speculative of these options, in part because he has some very serious off-the-field red flags that each team will have to do their due diligence on, but also because of how he would fit in with what is already on the Panthers’ roster. Williams is very slight for an NFL running back, listed at only 170 lbs, and while in years past that might relegate him to special teams and the occasional long third down, for a team with a bit of imagination he could potentially offer a valuable RB/WR hybrid, similar to how Curtis Samuel was used this past year.

While he is by no means a power runner, his excellent contact balance and change of direction allow him to avoid most head-on collisions and he does a great job of bouncing off arm tackles. While he can be a little over-aggressive pursuing the big play, in terms of vision, he hits the line with real speed and has plenty of ability to make a man miss in space with the speed to take plays to the house as well.

If he is to be used as a receiver, he will need to continue to work on his route running and expand his route tree, but he does show a number of nice flashes in terms of his ability to generate separation through routes and has good hands with his ability in space making him a real threat after the catch.

Not a conventional avenue for the Panthers to explore, but if they are happy with Pooka the person, he is one of the more intriguing prospects in this draft. 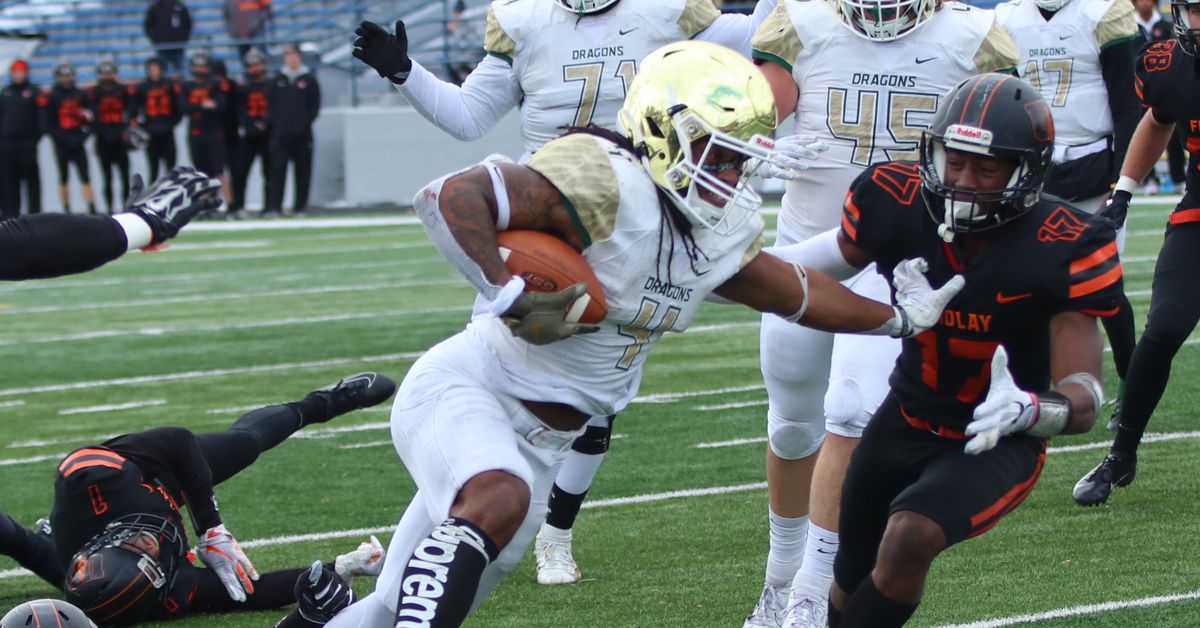 It is always hard to compare production of players who dominate at smaller schools with those who are merely good by FBS standards, but if Hardy is able to translate his somewhat-frenetic game to the NFL level, he could be an absolute steal for somebody at the very back end of the draft or even as a UDFA. He has excellent contact balance and good ability, and while he isn’t super explosive he shows good vision on the whole with even some flashes of upper tier traits such as the ability to manipulate blocks with changes of speed to generate leverage.

The main attraction, however, is the huge numbers of tackles he either breaks or avoids, with a nice bounce-cut and the ability to break most arm tackles. If he is able to translate this running style effectively when facing better athletes and more sure tacklers then he could be a significant contributor to an offense, even if he is something of a throwback stylistically.

He does however, need to prove himself in the passing game, as while he can catch the ball he really wasn’t probed as a route runner at all and his blocking technique as a pass protector is in need of work.

Hardy is probably best suited as a UDFA, especially for the Panthers, as the uncertainly of how his running style will adapt to the level of competition and the significance that plays in his overall value making him something of a boom-bust prospect, but he would certainly offer the Panthers a power rushing option and at 5’10 225 lbs he does have some potential to add a little more weight to contribute as a fullback. 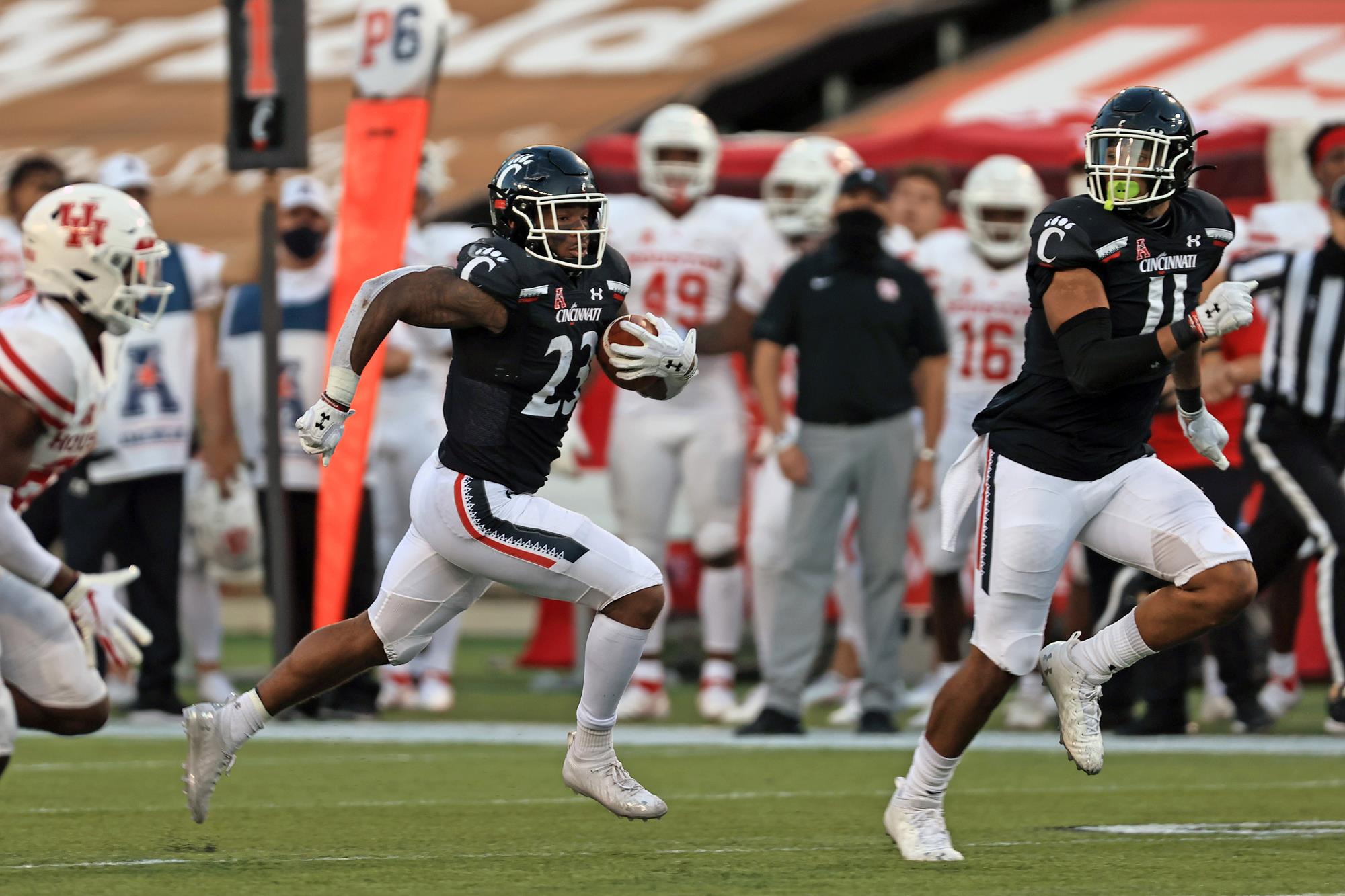 Doaks is another player who looks to be selected either late on day three or signed as priority UDFA, and is another whose slightly unusual combination of traits make him an interesting prospect for NFL teams. For a 6’0, 230-pound running back he shows great acceleration, and he causes real issues for defenses when he is able to hit the hole at speed or when running laterally against a defender as a receiver. However, his lateral agility does raise some concerns, and his effectiveness may rely on him being able to hit an open gap early in plays.

Aside from his remarkable quickness, Doaks is able to break a fair number of tackles and does a good job of consistently adding yards through contact, and while not a massive plus to his game, his vision is at least solid. As a receiver, he not only has the quickness to create separation in the flat but also really good hands that show up when asked to make catches away from his frame or in traffic.

While he could have some effectiveness as a power rusher in a run-heavy team like the Rams, he could also be an interesting option to mix in at fullback as somebody who looks to be very effective on short yardage dive plays and who also has the size to contribute as a blocker while being an interesting match-up piece in the passing game, and in that regard he would be an interesting fit with the Panthers.

The Panthers probably won’t address the running back position until the late rounds, if they address it at all in the draft itself, but there are at least a few names who should attract at least some consideration as the draft reaches the closing stages, and who should absolutely be people the Panthers look at should they go undrafted entirely.