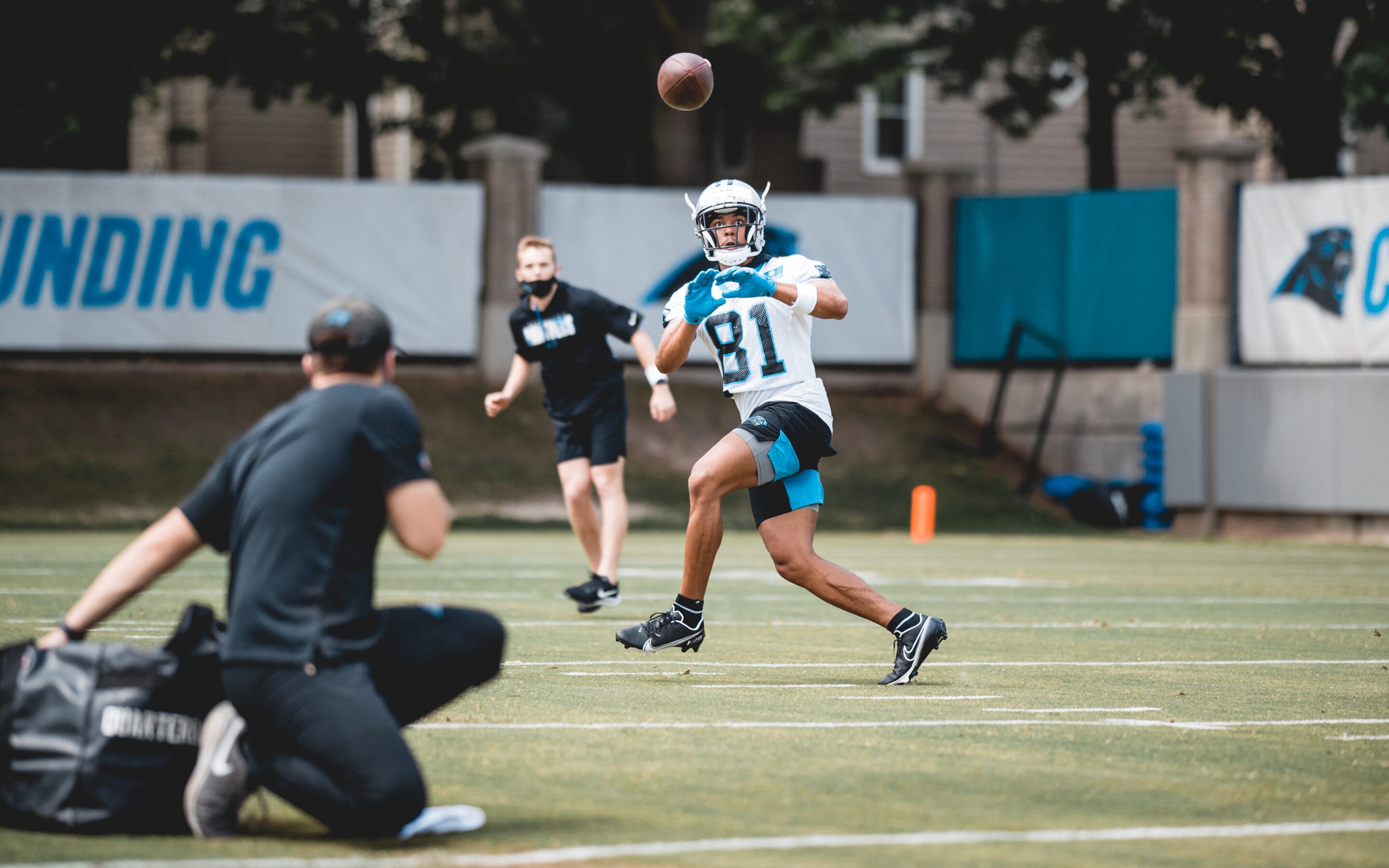 Even after more than a year away from the football field, Micah Simon stepped onto the field at the BYU indoor facility in Provo knowing he would run fast.

Yes, he had been running routes with the presumptive #2 pick in the draft after former teammate Zach Wilson pinged him to help draw up the script for his Pro Day. Yes, his speed was what had caused members of the Panthers staff to tell Scott Fitterer to keep an eye out for Simon at the BYU Pro Day. And yes, he had put up fast times before.

“I expected somewhere in the low 4.3s for sure,” said Simon last weekend via phone interview during the Panthers’ rookie mini-camp. “Last year, whenever I did the whole Pro Day training and did the Virtual Pro Day, I ran like a 4.35 or 4.37 – when I trained, I was hitting low 4.4s or high 4.3s, so I knew being fresh and having a lot of adrenaline, I’d be able to run pretty fast.”

Pretty fast, indeed – that 4.34 was fourth-fastest among wide receivers during the Pro Day circuit and would have been second-fastest behind only Henry Ruggs at the 2020 Combine.

Micah Simon checking in with a 4.34 ⚡️ pic.twitter.com/8AMok6ru3u

While the 40-yard dash that ultimately gave him his opportunity in the NFL – Fitterer was on the phone the next morning offering a contract and a shot at an NFL roster spot – lasted only 4.34 seconds, there was a whole lot of history built up in that burst.

The 6-1, 195-pound wide receiver from Texas hadn’t had a competitive rep since Christmas Eve of 2019 and, following the conclusion of BYU’s 2019 season, Simon’s chance to demonstrate his athleticism in front of NFL Scouts at a Pro day was one of many things that fell victim to the COVID pandemic. For a wideout that only had 90 receptions for 1,109 yards and five TDs in 40 games at BYU, the ability to show off that raw athleticism would likely be his best chance at a shot in the NFL.

“Not being able to have meetings with scouts and letting them see me up close,” admitted Simon. “I think that hurt me.”

So he ran his own Virtual Pro Day in north Texas, piling up numbers that would have put him in the top-tier athletically – his 3-cone time of 6.67 seconds would have been sixth among wideouts in 2021 and his 3.99 shuttle matched Ja’Marr Chase – but draft day 2020 came and went and calls from NFL teams weren’t coming.

Held our own Pro Day last week at Atlet Sports that was filmed due to pro days being postponed/cancelled. Shoutout to Ryan Mentzel and the team for getting me ready to go 💨 pic.twitter.com/rafTWNsDRS

In June, he moved from Texas where he had been training back to Utah and took a job at First Colony Mortgage as a loan shipper – “a middleman between the borrower and the banks” – and while he still kept in shape, doubts began to creep into Simon’s mind as he worked a 9-to-5. A far cry from the NFL Draft.

“I took a step back and asked myself if I really wanted to do this… during that period from September, October and November when my life was really in limbo,” explained Simon. “I was working a job. I wasn’t getting any calls from the NFL – that was the hardest time when I wasn’t sure if I wanted to keep pursuing it.”

“But I knew deep down that if I gave it a go, I would be able to make it.” 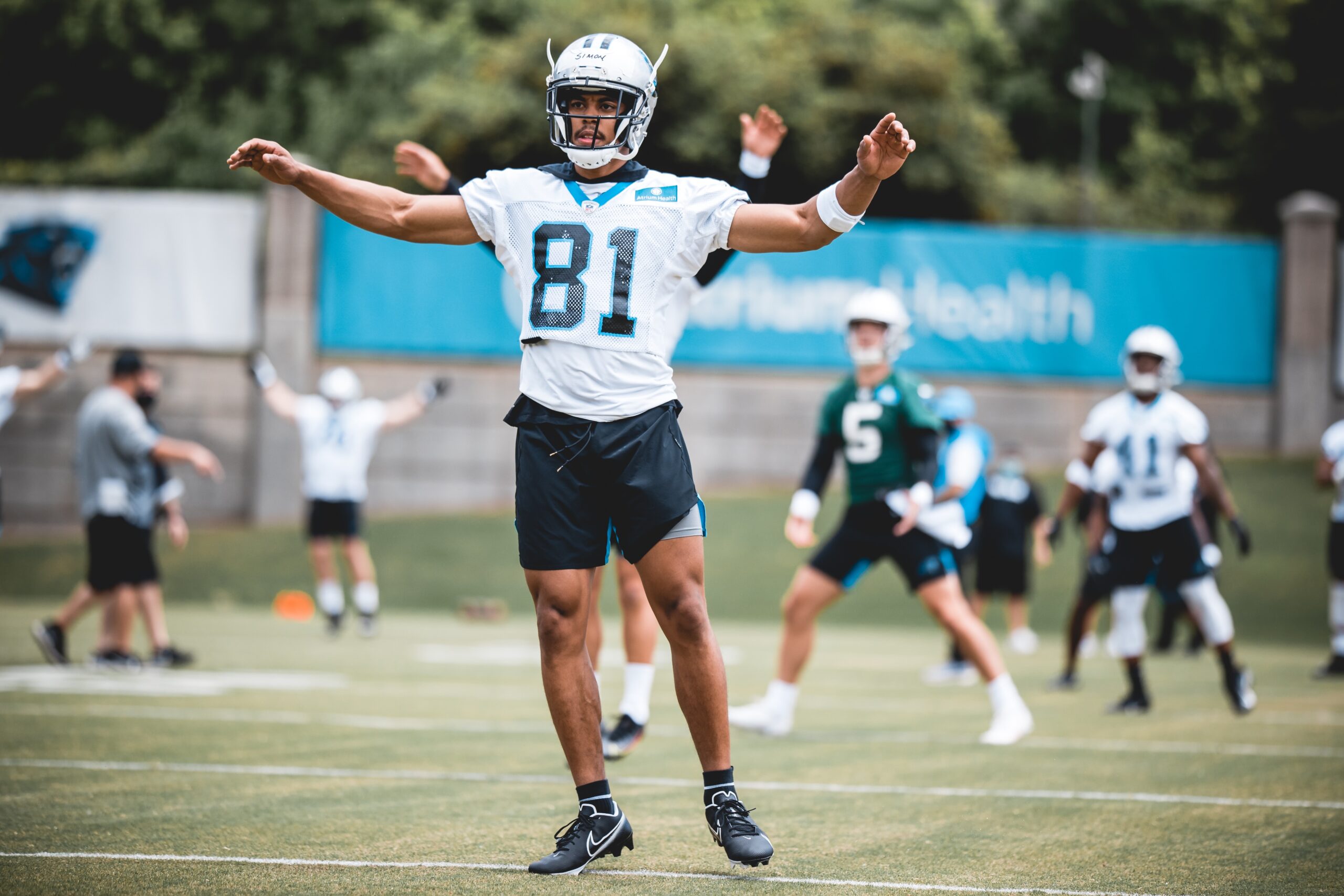 When Simon spoke to his former coach and AD at BYU, he knew there was a chance to come back and participate in the 2021 Pro Day after his had been wiped away, so he went from full-time to part-time at First Colony.

First thing in the morning, he’d be at the gym training for hours, whether it was running or lifting weights – back home for a quick shower and a meal before logging on to work virtually from 1-5, passing loan documents from one place to another and ensuring mortgages closed on time. When the whistle blew at 6p, it wasn’t Miller Time – it was time to dive into film study.

“Being away from the game, meetings and film study for so long, I tried to do film study on my own afterwards,” recalled Simon, explaining that on the weekends is where he could really get most of his work done. “That was super big for me on the weekends because I had more time – I was always out on the field on the weekends.”

In retrospect, it’s kind of a good thing the BYU Pro Day was on a Friday. Because after getting the phone call from Fitterer Saturday morning and flying to Charlotte for a physical, it was back to work for a couple more weeks to wrap up loose ends at First Colony before reporting to Bank of America Stadium for Phase 1 of off-season workouts. He laughs when he thinks about the flexibility he was given, whether it was to fly to California to run routes with Zach Wilson, cut out early to get a lift in – or just miss a Monday so he could fly to Charlotte to sign an NFL contract.

“I’ll definitely have to send them some Panthers gear.” 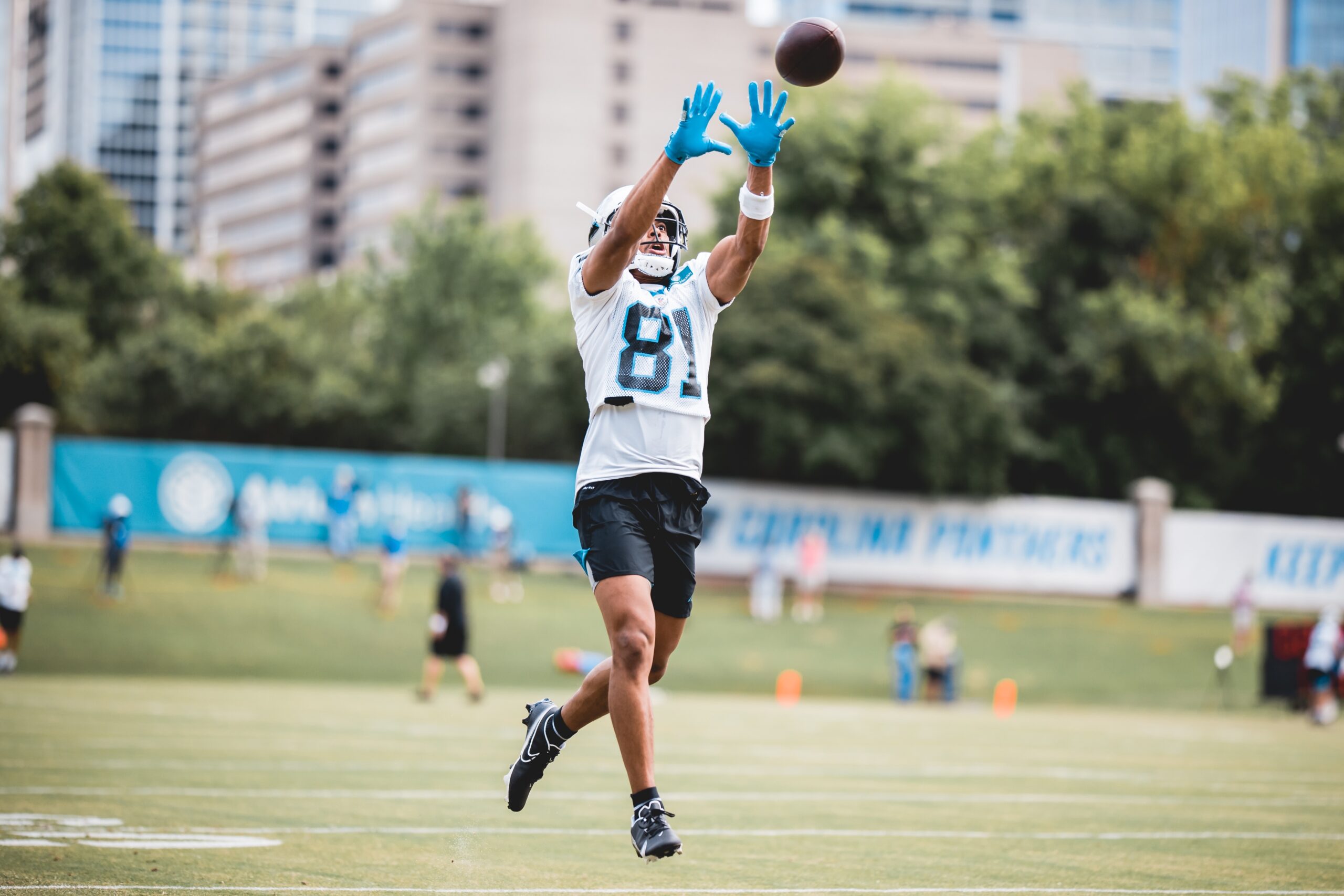 Simon still has his work cut out for him – in order to receive the bulk of the minimum annual salary of $610,000 for a rookie, Simon must make the 53-man roster, which will likely mean winning a battle for a receiver spot against the likes of Brandon Zylstra, David Moore, Omar Bayless and Shi Smith. Making the roster is an uphill battle for all UDFAs, especially those that are a year older in a crowded wide receiver room, but this is a Panthers roster that is littered with players who weren’t drafted and played roles in their 2020 season.

This year’s process has already begun – most recently with this past weekend’s rookie mini-camp, where Matt Rhule and his staff will evaluate players to see if they can find diamonds in the rough just as they did last year.

“We try to evaluate each and every guy and compare that against our rosters. We’re looking for guys that have the requisite skills – that are big, fast, strong and athletic – but they’re also smart, tough and dependable,” said Rhule. “I can tell you, there are some guys here…you can tell yourself, they can help us in some way, you can see it already. A lot of guys just need an opportunity, so this is a good opportunity.”

Simon knows that he’ll need to produce on special teams in order to catch the eye of his coaches; he’s been taking reps on all four teams – kickoff, punt, kick return and punt return – and he doesn’t want to be pegged as just a speed guy…he likes to hit: “Tackling and being physical isn’t an issue for me, that’s something I loved to do in college – you only get so many chances on offense to really deliver a blow, so it’s fun to do it [on special teams].” 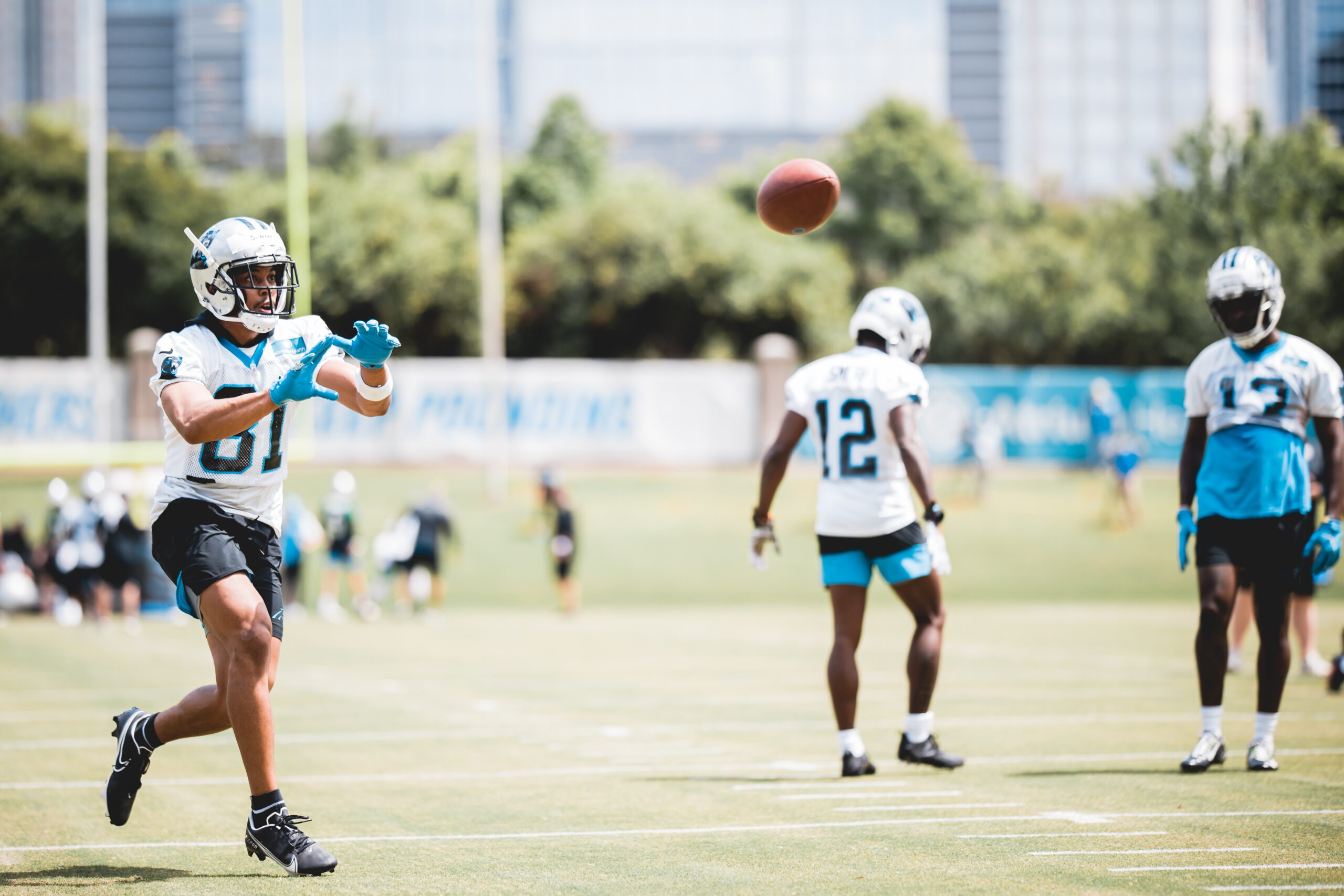 It was the speed that got him his opportunity, but it will be his work ethic that makes the most of it.

“They can see the way I work, the way I pay attention to detail [and] be coachable. I’m a good teammate, good locker room guy, I’m a player that’s going to do whatever it takes – that’s what I’ve reiterated to Coach Rhule, Coach Brady, Coach [Frisman Jackson], Coach Blackburn and Coach Foley,” said Simon. “Those are the things that are going to help me separate myself and give myself a chance to stick on the roster.”

If it all works out and Simon sticks in the NFL, many will point to that 40-yard dash in Provo as a pivotal moment when, in reality, it was a culmination of a lot of hard work. And he hopes he’s not done yet.

“I knew, this year [if I was] able to be in front of all the teams, the goal was to catch an eye of one team….and caught the eyes of Mr. Fitterer and I’m just thankful to be here right now,” said Simons a couple of minutes before heading out to try and impress his coaches once again. “That was the first step to get my foot in the door — and now I’m doing everything I can to stay.”