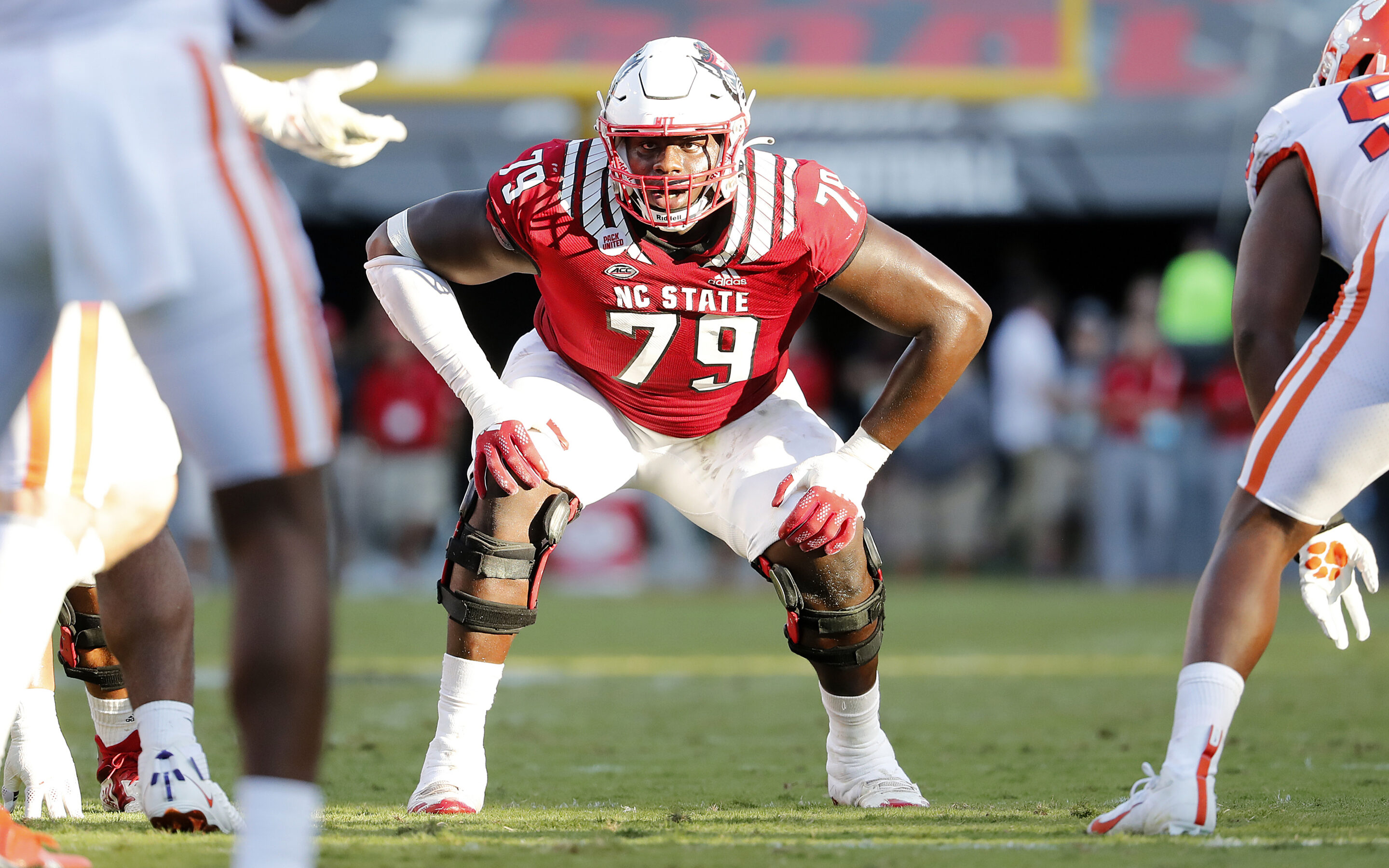 The first five picks of the 2022 NFL Draft probably couldn’t have gone any better for the Panthers. With five defensive prospects going off the board with the first five selections, they found themselves able to select either their top quarterback or their tackle. Though the Panthers went deep into their ten-minute clock, they ultimately decided to take the top tackle on their (and our) board, selecting NC State’s Ikem Ekwonu.

So, what does he bring to the Carolinas, and what does this mean for the 2022 season and the rest of the draft? 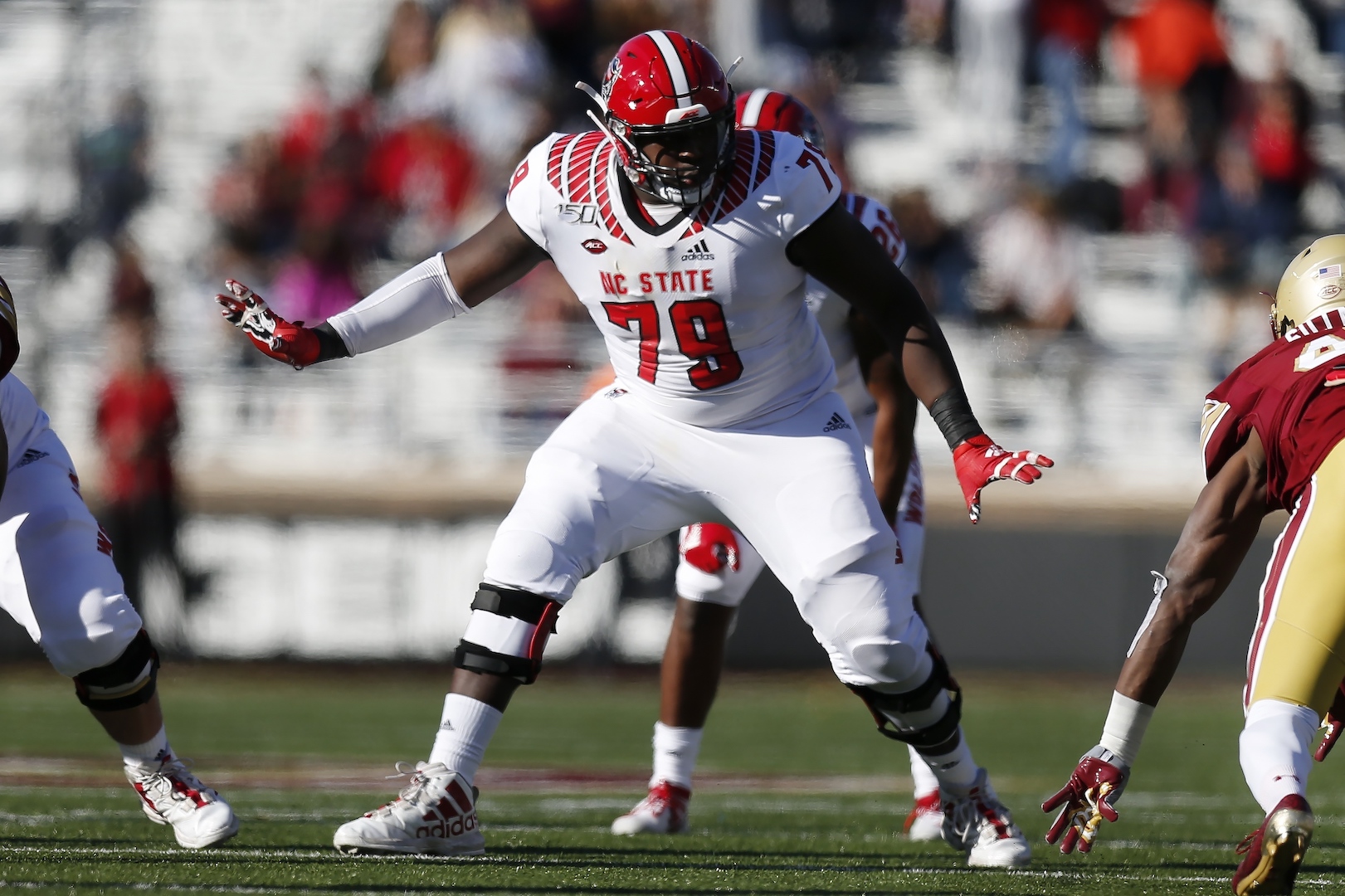 Ekwonu, a charlotte native, is listed at 6’4 and 310lbs with his 34″ arms fitting the length profile that Matt Rhule has talked about in the past. Beyond just length, he shows the elite movement skills that teams covet at the position, which allows him to both pass protect against speed rusher and get out in space both as a pulling blocker and on screens. Combine this with his excellent core strength and powerful leg drive and he has all the physical tools that a team could want in a franchise tackle.

From a technical perspective, he does have some work to do both in his stance and his hand usage, but there is also a lot to like as well. In pass protection, he shows good footwork to maintain balance and flashes the hand placement and arm extension to lock edge rushers out of plays. However, he does need to ensure that he doesn’t let his arms drop after the snap as this both exposes his frame and, at times, leads to him punching late and slow which allows edge rushers easy chances to work him off balance. 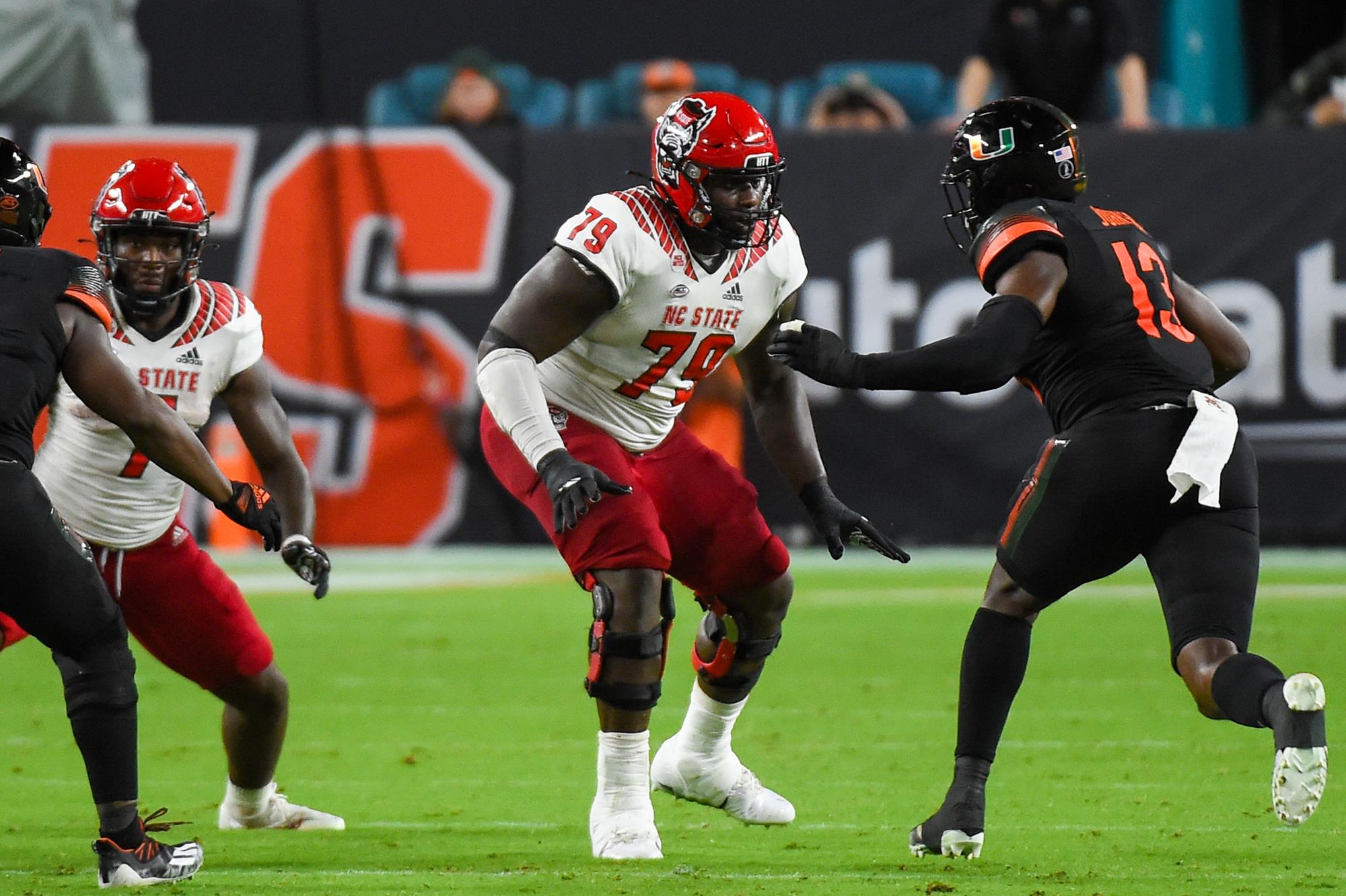 As a run blocker, he shows really nice footwork to get outside defenders as well as a good understanding of how to use this to create leverage that opens up rushing lanes. As with the passing game, he needs to make sure that he doesn’t let his arms drop as this can lead to him punching at air at times.

Most importantly, however, he needs to work on the consistency of his pad level as he can sometimes let his weight get a little high which can make it harder for him to react laterally than would otherwise be the case and, when he tries to match pad level with waist bend, this can also cause his weight to get out ahead of his feet which puts him at the risk of whiffs. Importantly, Ekwonu ticks all the boxes off the field as well. Speaking after the selection, Scott Fitterer certainly didn’t hold back:

“He’s the tone setter, he’s a smart guy … He’s got every trait you want in an offensive lineman so we’re excited about that. He came in here and met with us a week or two ago and really impressed everybody so much. (Offensive line coach) James Campen and (assistant offensive line coach Robert) Kugler went down there and met with him, they walked out and they were like ‘Wow, this guy just blows us away with his intelligence’.”

His coachability also stands out on tape as he took a clear step between his Sophomore and Junior seasons from a technique perspective and, if he can continue to develop at this rate, he has a chance to not only be an excellent pick, but also a truly excellent left tackle. 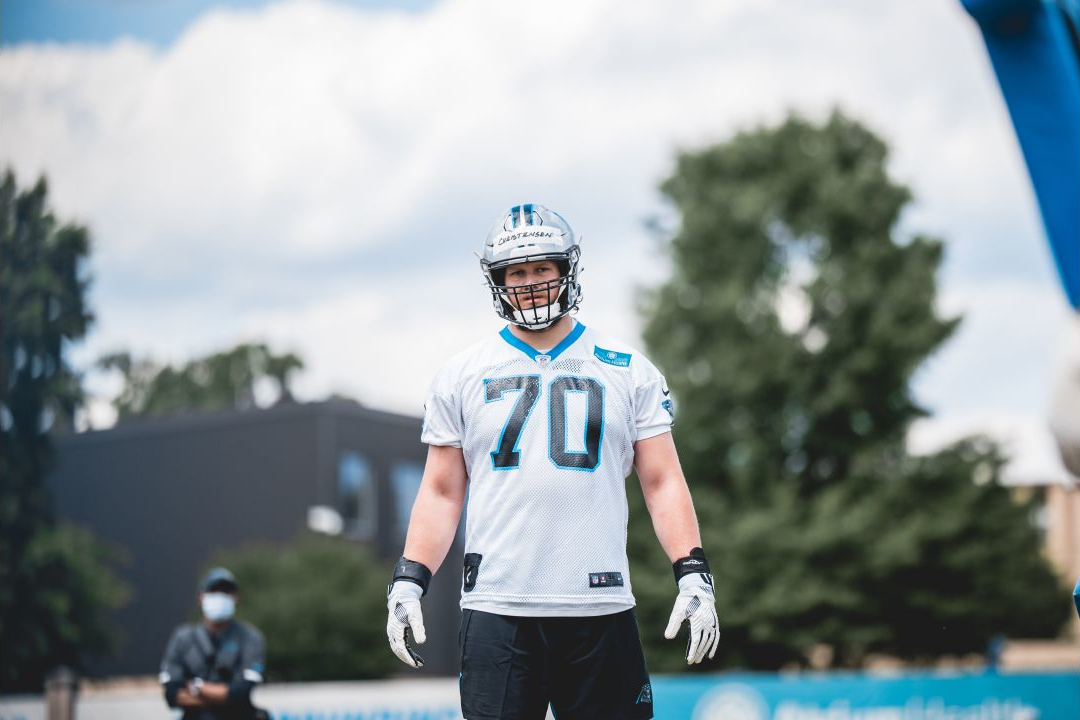 For the Panthers, this clearly fills a long-standing significant need at left tackle and, by extension allows 2021 third-round selection Brady Christensen to transition inside where the Panthers ultimately thought he would be best coming out of college. With an open competition expected at left guard, and free agent center Bradley Bozeman only signed for one season it is still unclear which spot he will be tried at first but, following a solid rookie season where he excelled as a run blocker and kept his head above water in pass protection, he has a chance to give the Panthers another long-term answer up front.

Looking ahead to the rest of the 2022 draft, Scott Fitterer made it clear that they are highly unlikely to make a major move back into the first round, and with no further selections until pick 137 they will face a long wait before they are on the clock again. Though the option of trading back into the second day of the draft remains open, it is not yet clear how this could be achieved without sacrificing 2023 draft assets that Fitterer went into the draft insisting they were keen to protect. 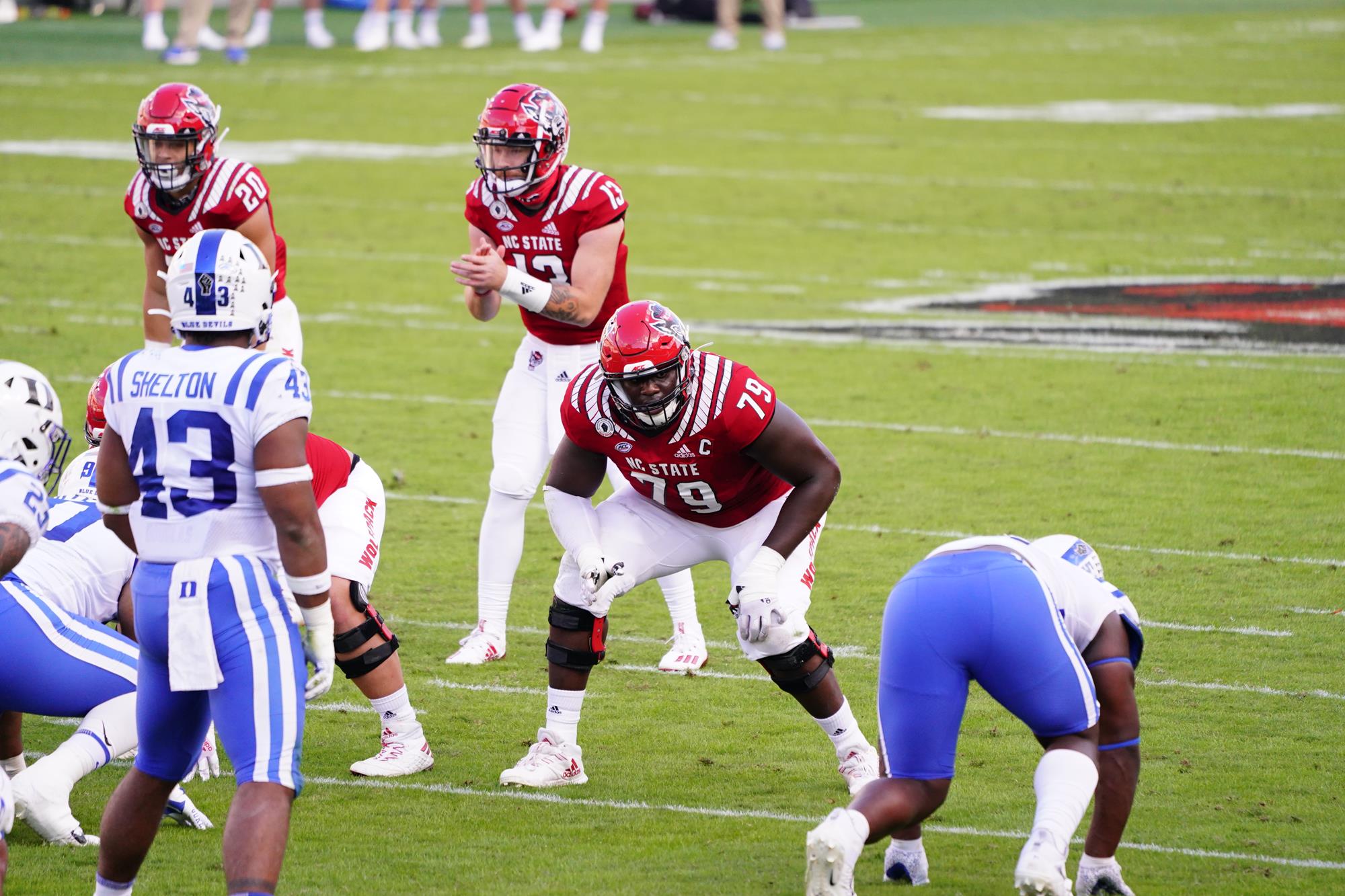 Ultimately, barring either a major trade or striking gold on day three, the Panthers will remember the 2023 draft for the player that Ekwonu becomes, for good or for bad. Given what he put on tape during his time at NC State, the Panthers will certainly have a lot of faith in things working out well and, if he can live up to his potential, then the Panthers will look back on today extremely fondly.