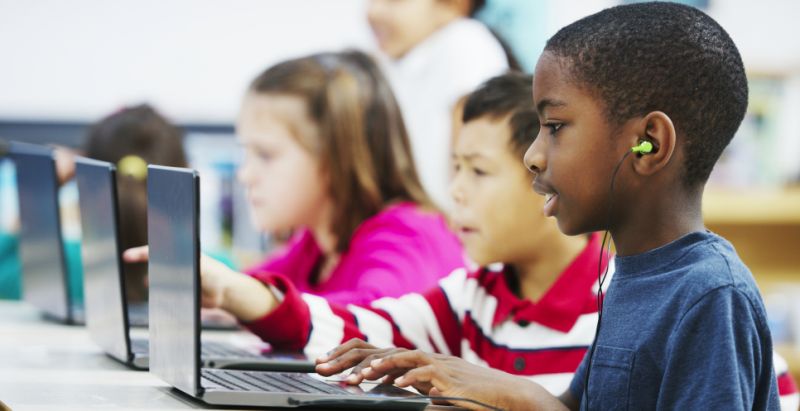 “During the last few months, we have seen first-hand the importance of remote learning but also the challenges and struggles that come with it,” said State Superintendent Johnson. “This donation by the Carolina Panthers Player Impact Committee and Lenovo will go a long way in helping these two districts help their students.”

“We are very grateful for the support from our partners.”

When the COVID-19 pandemic hit, many children in low-income neighborhoods were affected because they were without computers to use for distance learning. So the Panthers Impact Committee, including linebacker Andre Smith, worked with the North Carolina Department of Public Institution to figure out which counties were in most need – and then they sprung into action.

Richmond County and Columbus County’s school systems will each receive 300 Chromebooks apiece, which will help the two systems ensure they have the access to computers that they need to continue learning during the pandemic and beyond.

“The sudden transition to distance learning put a spotlight on the digital divide that still exists and is a very real obstacle for too many K-12 students and public school systems,” said Matthew Zielinski, President of Lenovo North America.

The Carolina Panthers Player Impact Committee is led by current Panthers Chris Manhertz, Smith, and Stephen Weatherly as well as Panthers legend Mike Rucker – the group of players provides support and assistance to organizations and causes across the Carolinas. For Smith, it is much bigger than just donating laptops, this is about helping children in the Black communities become more focused on their education.

“What I learned from growing up with these young men who didn’t take school seriously is how important it is,” Smith said. “So often, especially little Black boys and little Black girls too, we all chase the big dream. We all want to be on a stage with the microphone, or on TV, or dribbling a ball, or scoring touchdowns. The odds of making it to these levels are very small.”

Smith also wants children to know that they don’t have to be pigeonholed into becoming only a music star or athlete. Rather, Smith would like to see children expand their thinking by focusing on their education.

“I want them to begin to understand that, for us to be successful, we don’t have to be a professional athlete, or a singer, actor, or actress, or rapper or anything like that,” Smith said. “That’s something I actually think about a lot — I think about guys my age and how they could’ve maybe turned the situation around once their big dreams didn’t work out. So I just know that from my perspective, I’ve learned a lot of things, and I’ve learned that there’s a lot of ways to be successful in this world.”

As for the Panthers being involved in the project, Smith believes this helps it stand out even more because of the team’s popularity in the North and South Carolina area’s

“The Panthers are the biggest brand in North and South Carolina. So if the Panthers say anything, everyone’s gonna look,” Smith said. “Whatever we do, people see. People care about what we do to an extreme level, especially our huge fan base. So having the Panthers backing is the best backing for this area. That’s why we also like to give people our support and allow people to use our platform because we understand how huge it is – and our reach can be global.”

The 300 Chromebooks to Richmond and Columbus counties are scheduled to be delivered by the end of June, which should give each county enough time to prepare them for the 2020-2021 school year, which will begin in August.