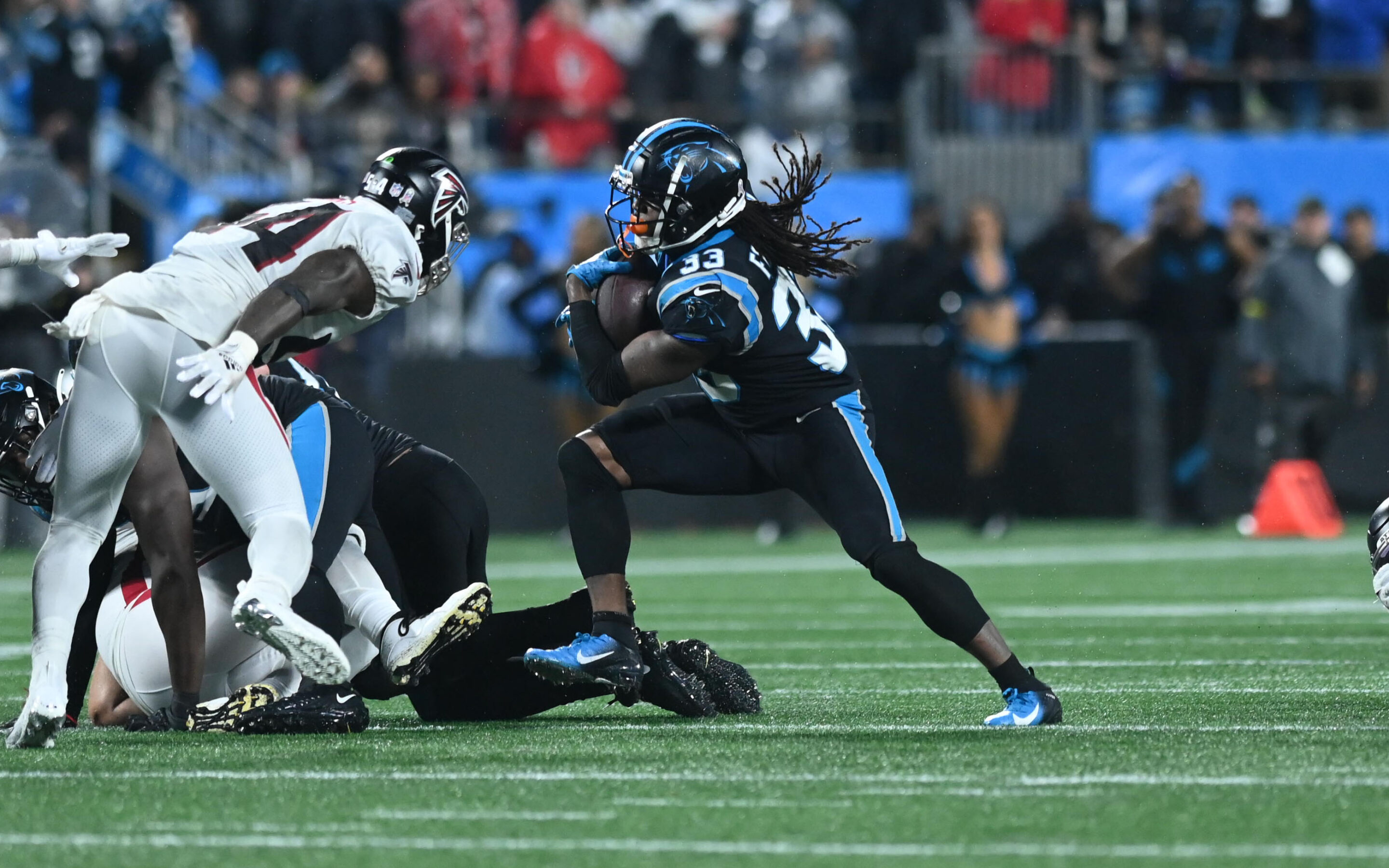 Welcome to the Week 11 edition of the Panthers DFS Guide! After a disaster in Cincinnati, the Panthers rebounded in primetime by running all over the Atlanta Falcons with D’Onta Foreman. The Panthers will head north to Baltimore as massive underdogs to take on Lamar Jackson and the Ravens. Before we dive into viable Panther plays for the slate, let’s review the primetime showdown against the Falcons.

With constant rain, the Panthers gave the Falcons a megadose of D’Onta Foreman. Foreman carried it 31 times for 130 rushing yards and 1 touchdown. Laviska Shenault Jr proved to be the key cog in the winning showdown lineup as he ran it twice for 42 yards and a touchdown while adding 3 catches for 17 yards.

Since Foreman dominated, the Panthers did not need much from their passing game, which led to non-fantasy relevant performances from the receiving corps outside of Shenault.

Can we turn to any Panthers for our main slate lineups this week? Let’s dig in to find out! 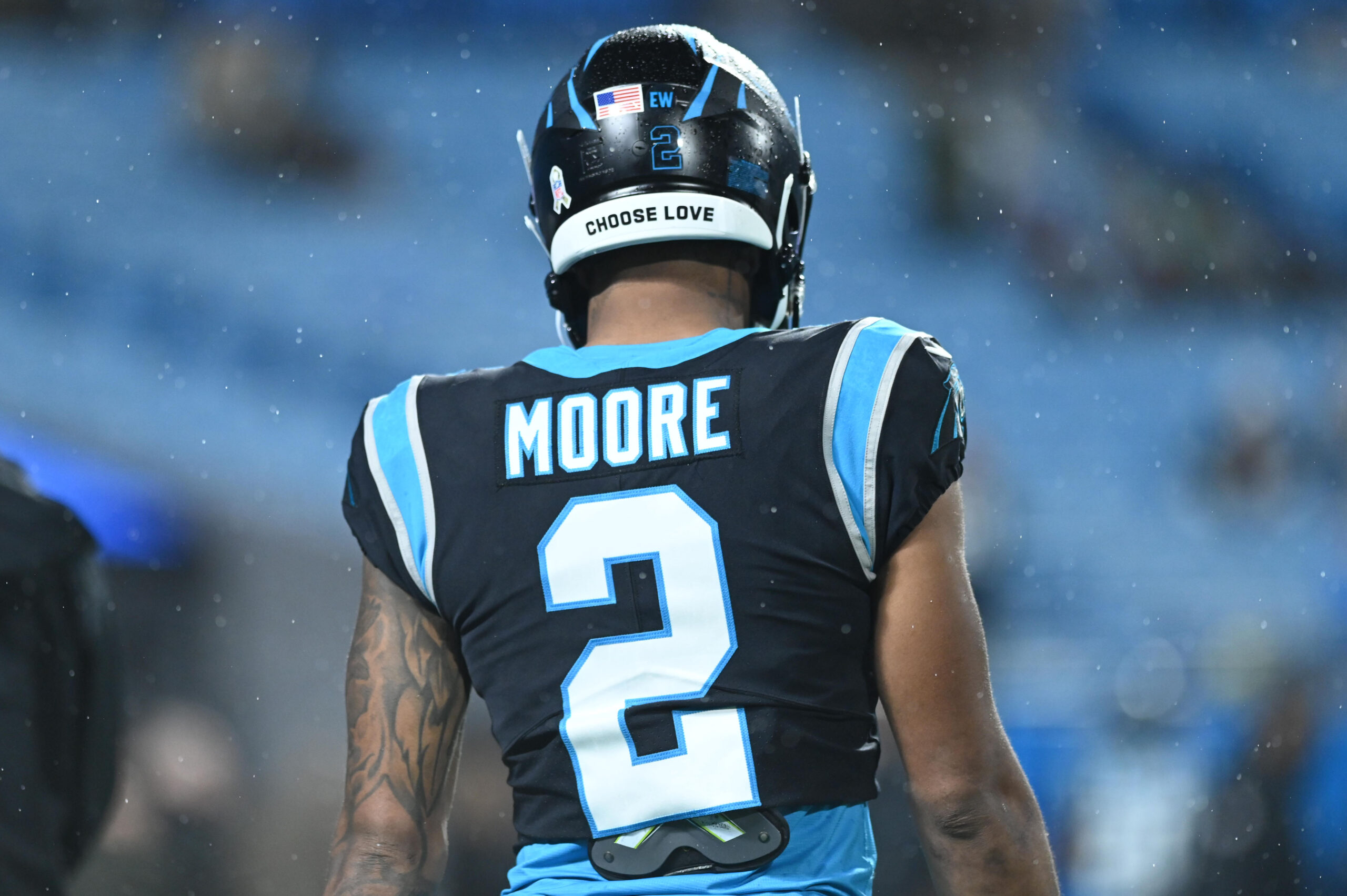 As of Friday afternoon, the following players are projected to be the most owned at their positions in large field tournaments:

Game odds per DraftKings Sportsbook (as of Saturday morning): 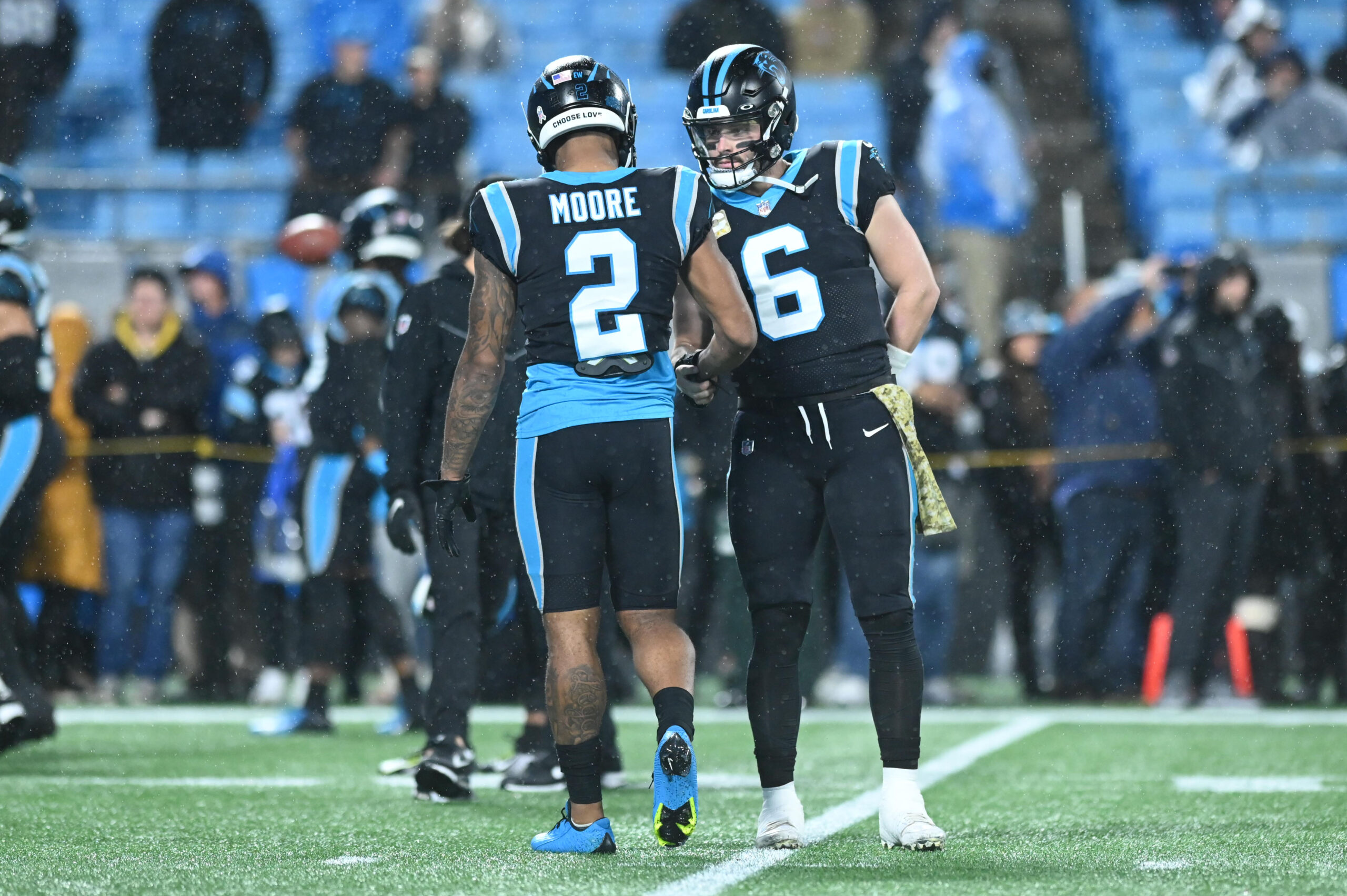 Sunny, with winds blowing west-northwest around 16-17 miles per hour. Temperature at kickoff should be around 37 degrees.

Frankly, this is not the week to play any Panthers in your cash game lineups as the risk is too high. The potential floor scores are extremely low based on how the Vegas oddsmakers think this game will play out.

Outside of D.J. Moore, most of the relevant Panther players are going to be ignored by the field. If you decide to play a Panther in your main slate lineups, you need to formulate a story of how you think the game will play out. I’ll provide some additional context for each player listed below. I don’t think I’d play more than one Panther in any lineup this week. If you believe that Mayfield can shred the Ravens, pairing him with Moore in a large field tournament isn’t the worst flier in the world. 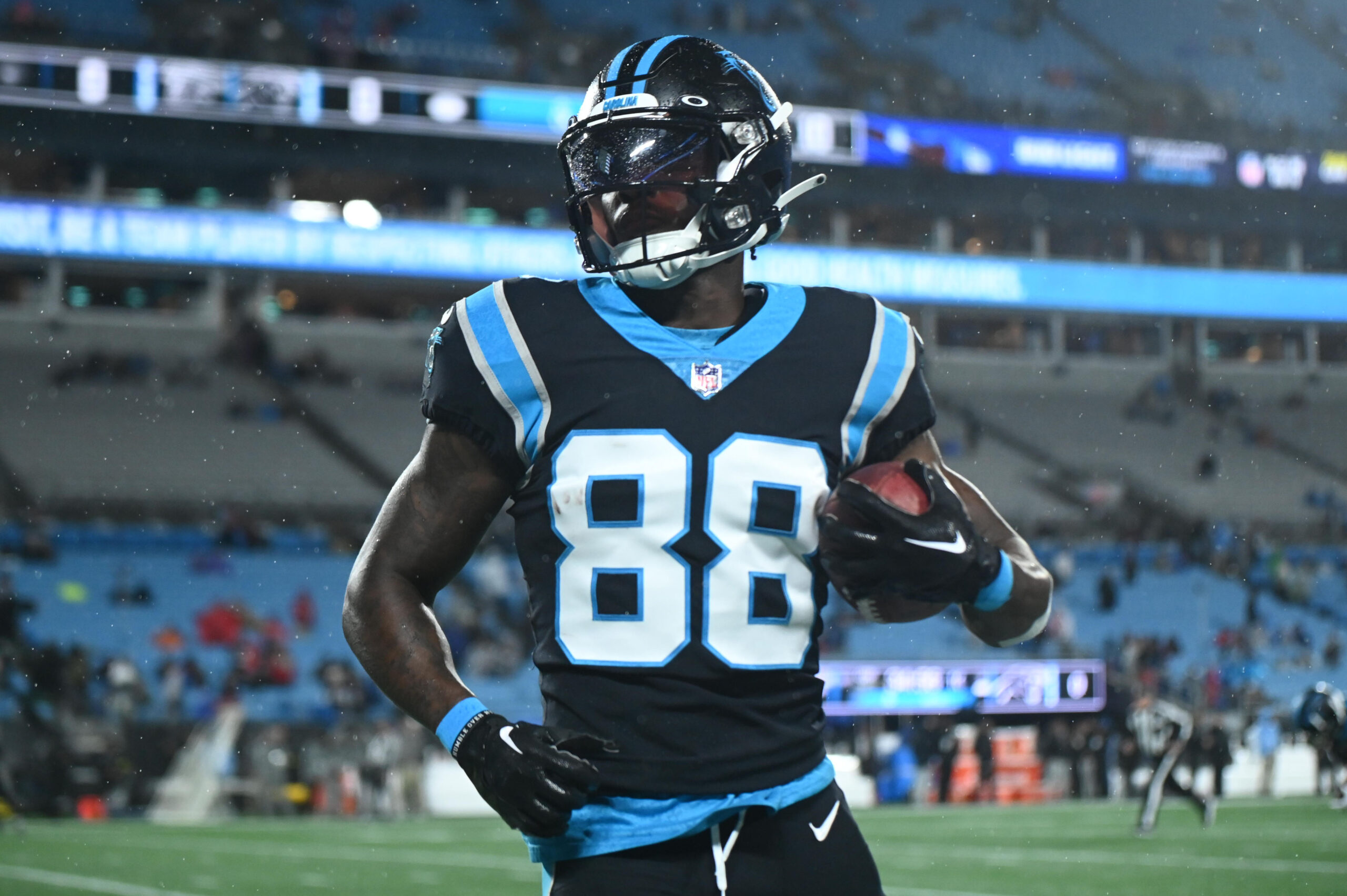 D’Onta Foreman: If you believe the Panthers can keep the game with Baltimore close, Foreman can be considered for tournaments. If the Ravens jump all over the Panthers like the Bengals did in Week 9, he could get scripted out of the game. If you think the Panthers get blown out, Foreman should not be in your lineup.

The Panthers got in a deep hole quickly in Cincinnati and Foreman saw his lowest usage totals since Christian McCaffrey was traded after Week 6. Against the Bengals, Foreman only received 7 carries and caught 2 passes.

Based on the spread, the oddsmakers don’t believe the Panthers have any prayer to win this game. If the Panthers can keep this game close, then Foreman should theoretically have a floor of 20 touches. Even with his limited work in the passing game, Foreman has shown that he carries a high fantasy ceiling. He is projected to be played by less than 5% of the field as of Friday afternoon. If you play Foreman, I would not include any other Panther in that lineup.

From a matchup perspective, this isn’t a great one for Foreman. The Ravens defense has allowed the fourth fewest rushing yards per game (76) and seen the second fewest carries per game (17.6) this season.

D.J. Moore: Moore is projected to be played by roughly 10% of the field as of Friday afternoon, making him the most popular Panther player on the main slate. This isn’t surprising since the Panthers are projected to be in a negative game script on Sunday.

Moore’s two best games of the year came with P.J. Walker at the helm and he’s out. While the two were not able to connect consistently at the beginning of the year, Mayfield did pepper Moore with targets. Despite the lack of fantasy production, Moore has received at least 20% of the passing targets in each game this season. While the matchup is daunting, Moore has a ceiling with the targets he receives.

Terrace Marshall Jr (DraftKings only): Marshall is the bonafide number two receiver on this squad. Marshall has only caught 2 passes for 13 yards from Mayfield this season, both against San Francisco. He will definitely be on the field and running routes. 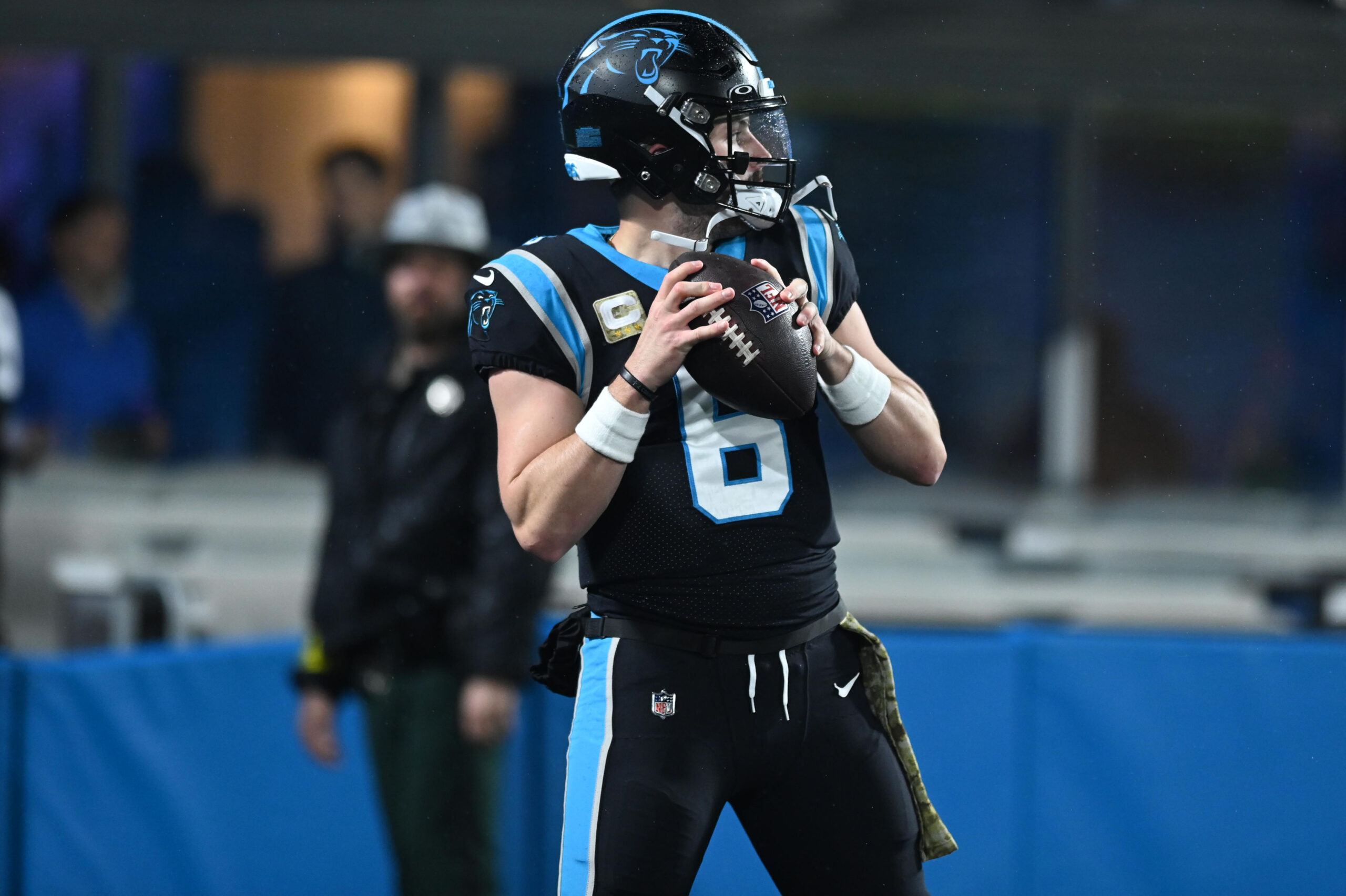 Baker Mayfield: Mayfield will start for the injured P.J. Walker. Quite simply, Mayfield was horrid earlier in the season. When I say horrid – he was the worst QB in the entire league based on any advanced metric available. Even with his cheap price tag, I cannot recommend paying down for him where there are other slate breaking QBs available for our lineups.

While he has experience playing in Baltimore, the Ravens defense has gotten healthier in recent weeks and has only allowed 7.1 yards per pass attempt over their last six games. I would not play Mayfield in any small-field or single entry contest. If you are someone that plays 150 lineups, having Mayfield in a sprinkle of those isn’t the worst option.

If Andrews gets ruled out, Likely would be in play for a captain spot.

If you think the Panthers keep it close – playing Foreman will give you a unique lineup build. I would not pair Foreman and Moore in the same lineup.

Moore will also give you a unique build. If you play Moore, you’ll want to put Mayfield in one of your flex spots.

I would only play Mayfield in a flex spot if you’re playing Moore or another Panther pass catcher in the captain spot.

Marshall is a mid-tier option that may go overlooked based on his price. Mayfield targeted Shi Smith often early in the season, so he isn’t the worst punt option on the single game showdown.