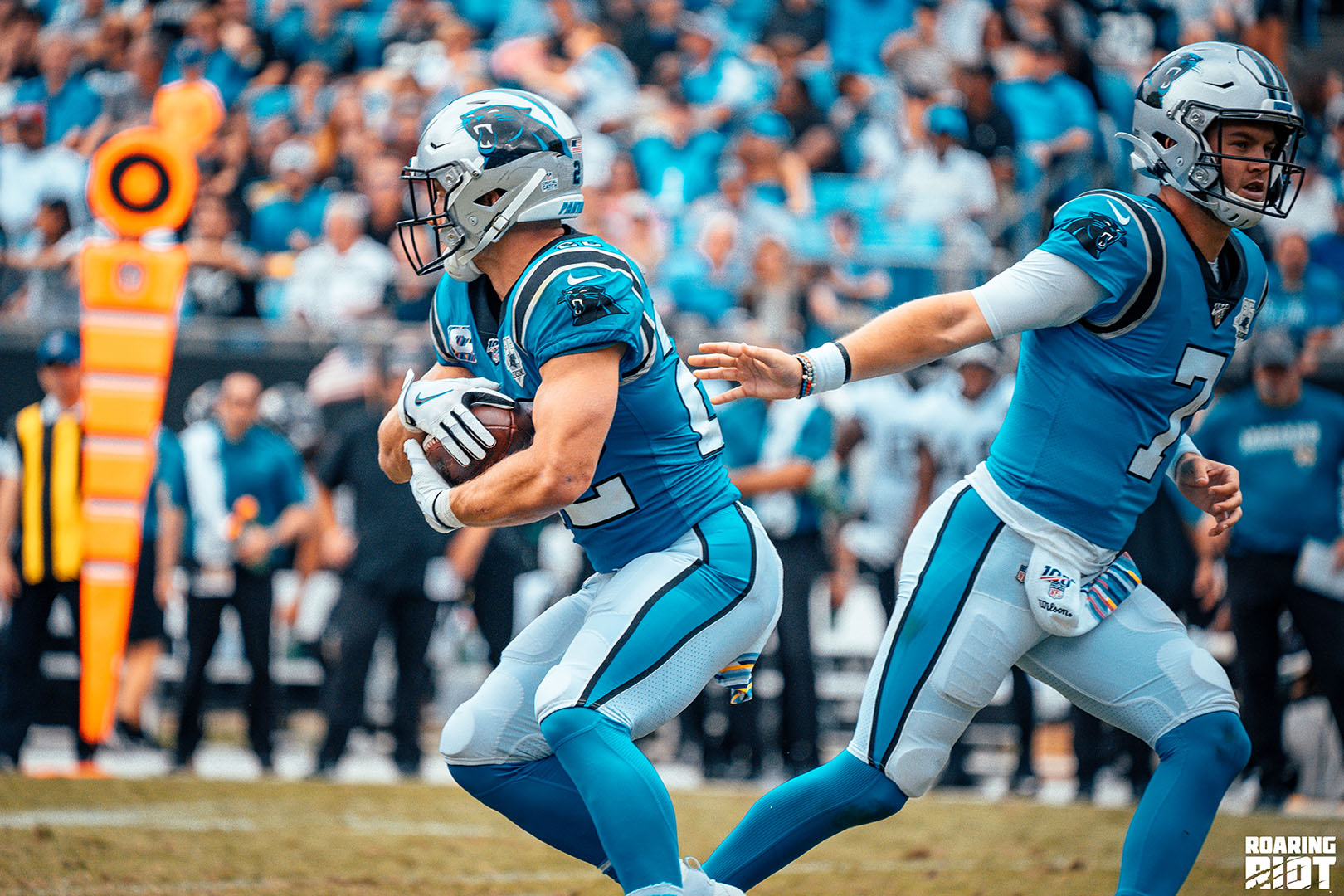 The Panthers had two huge plays on the ground on Sunday – an 84-yard touchdown by Christian McCaffrey and a 59-yard touchdown by Reggie Bonnafon. In a game that ultimately came down to seven points, that was the difference between a win and a loss. Whenever you can get two long rushing touchdowns in a game that should be seen as a huge success, but the fact that the Panthers were able to get both with the same playcall is extraordinary.

So what was this play call, how did it lead to two huge scores and will it always work this well?

The Panthers ran several variations on this play a number of times throughout the game – and it is worth noting that the success of this play depends a reasonable amount on the defense respecting the threat of the outside run – but this was the first time they managed to break off huge yardage with it. It was also the result that is closest to how the play was designed to work and so it’s worth looking at first.

In terms of formation, the offense have two receivers on one side and one on the other, with Curtis Samuel close to the line in the slot as the solo receiver, Allen under center and Greg Olsen initially lined up on the two-receiver side before motioning across the line. The defense has one high safety with a defensive back over the top of each receiver in what looks to be man coverage and seven defenders in the box with four down linemen:

However, as we are yet to see Allen really used as a runner, this means the defense has a defender for every blocker with one free defender to take the running back. From the front-on view, you can see quite easily how the defense is lined up before the ball in snapped:

Here, Harrison can be see to be motioning down to adjust to Olsen’s motion, but the Jaguars have no fundamental flaws in their formation. So how does the Panthers’ play design look to change that?

There are a number of things to note here.

First of all, the majority of the offensive line are crashing to the right of the image. Paradis is tasked with blocking the 1-tech, Van Roten and Daley double the defensive end and Williams is tasked with working to the second level and sealing off the play from there. Olsen is simply tasked with preventing the left-side defensive end from crashing down and disrupting the play while Samuel works across the field a fraction after the snap as a jet fake. Finally, and possibly most importantly, Moton is asked to make a reach block on the 3-tech, thereby looking to create inside space between him and the guard. However, if they adjust properly, the defense should still be able to stop this:

All that is going on here is the defensive linemen staying in the gaps they start in, while the second level defenders all shift across with the Olsen and Samuel motions. Depending on the specific defensive responsibilities, this could either include them all shifting along or some staying in their gaps, while others run with specific receivers – as has been indicated in the image. This might sound complicated, and in some ways it is, but this is how defenses all across the NFL deal with motion and pulling blockers. So what went wrong?

Well, first, let’s look how things develop up to the points where McCaffrey gets the ball:

Here, the defense has largely done as indicated above, with two keys exceptions. First, the 3-tech on the left hand side of the image has allowed Moton to get inside of him, and this is the key block which allows this play to be so effective. However, for the play to consistently gain solid yardage, it is the fact that neither Harrison (#36) nor Williams (#56) have made any move towards motioning across with Olsen and Samuel. Jack (#44) can be seen to be changing direction just at this moment, as he notices Olsen working across the formation and looking to go with him.

This then leads to the following situation:

Here, you can see how Moton has managed to create a block inside of him by getting inside the 3-tech. Although they look completely out of position, Josh Allen and Myles Jack are actually correctly reacting to the motion – it is the failure of Harrison and Williams to adjust with them that leaves this gaping hole in the middle of the field:

And as this is Christian McCaffrey, that means this goes to the house:

This play design all hinges on the outside defenders reacting to it like an outside run and then cutting the ball back inside. On this play, neither of them react across with the motion and the result is a huge play. So was the Bonnafon touchdown just a matter or rinse and repeat?

Well, sort of. This touchdown is actually a good example of how this play can still be really effective even if it doesn’t work perfectly. Just to confirm, here is the play call to show that it is the same once again:

This time, the play is flipped so the blockers are all now crashing right rather than left, but the play design is exactly the same.

As before, the defense should be able to react by the defensive line staying in their gaps and the four defenders at the second level all working across to cover the gaps. The only marked difference here is that the corner is in press this time, which, if anything, would help the Panthers as this makes it harder for him to run across the formation without getting caught in the traffic.

So what happened by the mesh point this time?

Again, you can see how the outside corner is left completely out of the play, but once again the edge defender and Myles Jack respond well. However, once again, neither Harrison nor Williams adjust across with both players staying on the strong side of the play and failing to adjust to the motion. On the plus side for the Jags, the 3-tech does a much better job against Daley, preventing the tackle form getting inside of him and cutting off the formation of a clear inside rushing lane. So how did this play go to the house?

Well, this becomes clear when you look at the point where Bonnafon cuts uphill:

Here, you can see very clearly how the second level defenders on the front side have all failed to shift across, but the 3-tech has managed to stop the reach block from working. The reason why this play still works, however, is that Myles Jack is left in two minds – the failure of the rest of the defense to shift with him leaves him stuck deciding whether to go wide with Samuel or downhill to dive on the run. Because the Panthers had already had some success on jet motions, he waits outside and Bonnafon has the space to cut upfield after reading the failure of the reach block well.

The touchdown, however, is all down to Bonnafon, as he freezes the safety and then beats him to the corner:

So this play will always work and we should just run it constantly?

Up Next: What’s The Opposite Of A Touchdown?