A Preview of Ian Thomas in Joe Brady’s offense 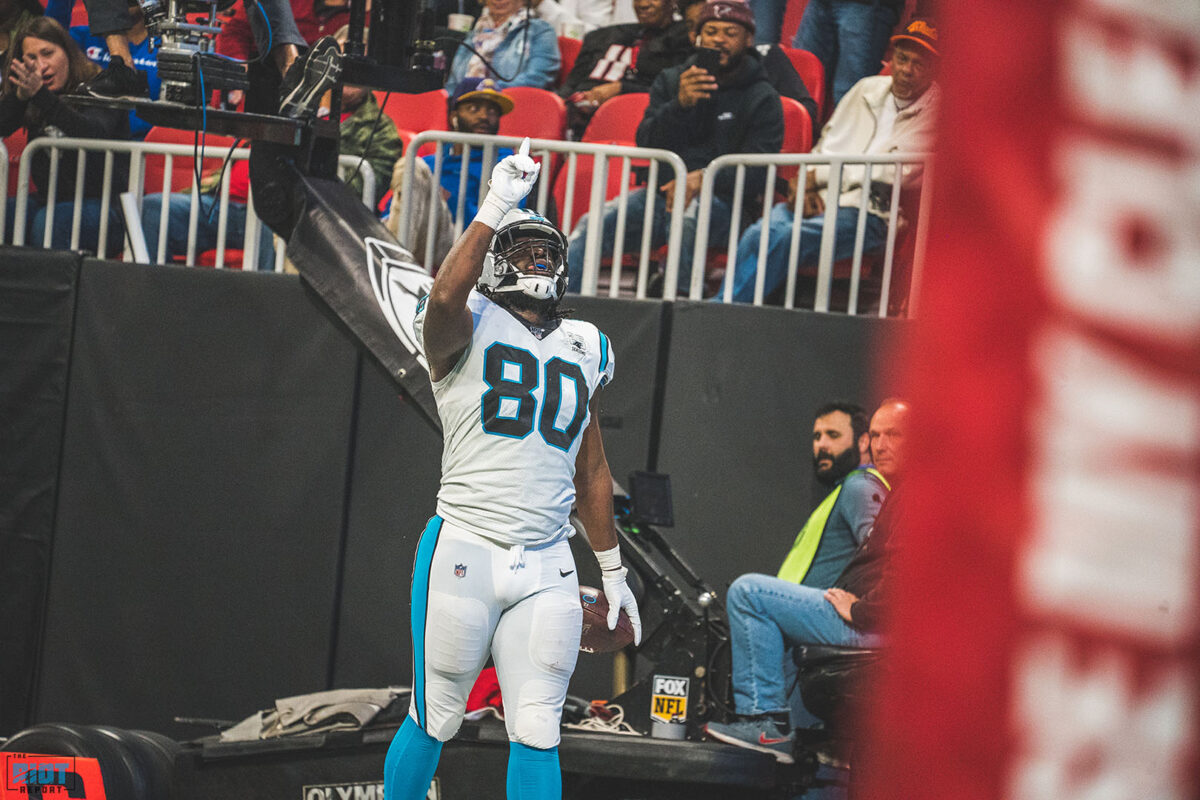 Amidst a bleak offseason for the Panthers, the hiring of passing game coordinator Joe Brady as the team’s new offensive coordinator has proven to be a a shining light of hope – or at the least a worthy talking point rooted in positivity. And how could it not be, as Brady is coming off a National Championship victory and was partially responsible for Joe Burrow’s Heisman-winning 2019 season, one that some would dare call the greatest season from a college quarterback ever.

The Panthers, on the other hand, aren’t planning on winning championships any time soon, as it appears as if they’re rebuilding – or at least retooling – for the future. Whether it means Christian McCaffrey and Curtis Samuel or keeping them for the long haul, it’ll be clear that Matt Rhule and Brady will want their own guys, as is the case for any new regime.

One current player that will almost certainly benefit from the arrival of Brady, however, is third-year tight end Ian Thomas. A fourth-round pick out of Indiana in 2018, Thomas has managed to stay on the roster but barely found any playing time last season until Greg Olsen missed two games late in the season to injury.

To an extent, Thomas saw his playing time increase, but finished 2019 with only 16 catches, 136 yards, and a touchdown. Despite this, he’s been optimistic about his chances of replacing Olsen as the franchise’s premiere tight end. Signs could point to the Panthers seeking out tight end help once the draft begins or later in free agency, but it’s likely that Thomas will at least be given the first shot at being the starting tight end in this Joe Brady offense.

Brady has experience working with talented tight ends after turning Thaddeus Moss into a Day 2 tight end over the course of the 2019 season – Moss was used by the newest member of Carolina’s coaching staff in a number of ways after not seeing much action at all before 2019. But before we get to that, let’s take a look at Thomas’ usage from 2019 in the Norv/Scott Turner offense.

Thomas (sort of) had a breakthrough performance in Week 14 at Atlanta, where he caught five passes for 57 yards and a touchdown as he started the game in relief of Olsen.

Thomas is put up in the left slot, where he played a little over 9% of his snaps from. Here…

…he’s able to break free and cross outside on the out route.

As we can see, Thomas has a nice display of quickness and separation on this route. Even though Kyle Allen is under pressure from a stunt forming on his right side, Thomas getting open with quick feet and nice hand usage gives him some breathing room. The tight end is able to pick up the first down and go into Beast Mode with more yards after the catch.

And here’s the problem with not getting a lot of playing time – it makes mistakes like this stand out:

One reason for the low number of snaps before Scott Turner took over the playcalling late in the season could be the three drops Thomas had out of his 32 targets, meaning he had a 10% drop rate.

The above drop was inexcusable, but first, let’s note that Thomas was lined up as a wideout on this play. These outside plays accounted for seven of his snaps, or just over 2% throughout the season. The previous regime clearly didn’t like lining a tight end up outside – Olsen played less than 2% of his snaps off the line in 2019 as well.

To Thomas’ credit, he does get some separation, but that’s a moot point – the ball bounces off his hands and into the arms of a Falcons defensive back for the interception.

Let’s take a look at Thomas as a blocker – the bread and butter of Thomas’ 2019 season existed in the right tight end spot, which counted for 129 of his snaps (approximately 42%). This is where he’s lined up on this play.

…but they’re enough of a nuisance where it gives Reggie Bonnafon enough running room outside.

Now that we’ve taken a small look at Thomas’ season, let’s see how he – or a new Panthers tight end – could expect to be used under the watchful eye of Joe Brady in 2020. For this, let’s look to Thaddeus Moss last season.

Related:   It Is What It Is: Matt Rhule, PJ Walker & Shaq Thompson

Thomas only lined up on four of his snaps in 2019 in the backfield (a 1.3% rate), and while I don’t have an exact number on Moss’, I can certainly say he had significantly more snaps. So if Thomas is the starter going forward, I’d expect to see a bit more of him as an H-back.

Moss has been highly acclaimed for his blocking abilities, and he’s especially good as a run blocker. His efforts here help give running back Clyde Edwards-Helaire a gap outside to run through – the tight end lined up as an h-back is something we should be used to in Carolina. Only instead of blocking specialist Chris Manhertz, Brady may use Thomas in this spot.

Now, I know what you’re probably thinking. Could Moss be a potential target for the Panthers because of his connections with Brady? The pairing obviously makes sense, but for a team that needs answers in the secondary and on the defensive line, Moss would certainly have to slip to a point where he’s a great value to be considered as a pick by the Panthers.

On some occasions, Moss was used in Brady’s scheme as a pass blocker, and surprisingly held up well on this play against Oklahoma against an edge rusher. Tight ends on edge rusher are normally taboo (and this is certainly the case in the NFL), but Brady had enough confidence in Moss’ blocking abilities that he felt the need to try him out as a guardian.

From what I saw, Moss appeared to line up in the slot as much, if not more, than he lined up in the tight end position. More noticeable is how much he was used outside.

While both Thomas and Olsen saw a microscopic quantity of snaps as wideouts, Brady seemed to be comfortable lining his tight end outside thanks to his athletic abilities. Here, the slot receiver is used to clear space for Moss’ slant route, which it does.

This is an ordinary play – but it shows that Brady is able to create open space for his receivers (and tight ends), at least at the college level. The zone coverage plus the slot guy’s route on a 3rd-and-10 make it easy for Moss to get close to first down yardage.

For an even better play, let’s check out the spectacular catch Moss had against Alabama below.

This time, Moss doesn’t get any help, so he’s required to get himself open. But once again, he’s lined up outside in the red zone (Thomas and Olsen saw a combined 16 targets in the red zone in 2019), evidence of the close bond he had not just with Brady, but with quarterback Joe Burrow as well.

Moss makes arguably the best catch of his career, just managing to snag this away from tight coverage.

Thomas’ instances of drops may or may not become a concern with more snaps, especially since he hasn’t been seen much against tight coverage, but I expect Brady to find a way to get his tight ends lined up more outside. Realistically, I wouldn’t be surprised to see the Panthers take a tight end at some point in the draft, though Thomas himself has had flashes of potential whenever he’s been targeted.

Joe Brady seems to have his tight ends heavily featured as H-backs and outside, with slot roles also showing up from time to time. This is a bit different from Thomas’ usage, which saw him featured mainly in the traditional tight end position or in the slot while only occasionally venturing outside or into the backfield.

This is not to say Brady won’t have his eyes set on McCaffrey or the duo of D.J. Moore and Curtis Samuel as the offense’s main focus – but in an offense that likes to have five passcatchers on the field as much as possible, it may be a tight end like Ian Thomas who sees the benefit of single coverage – and is able to exploit those matchups.