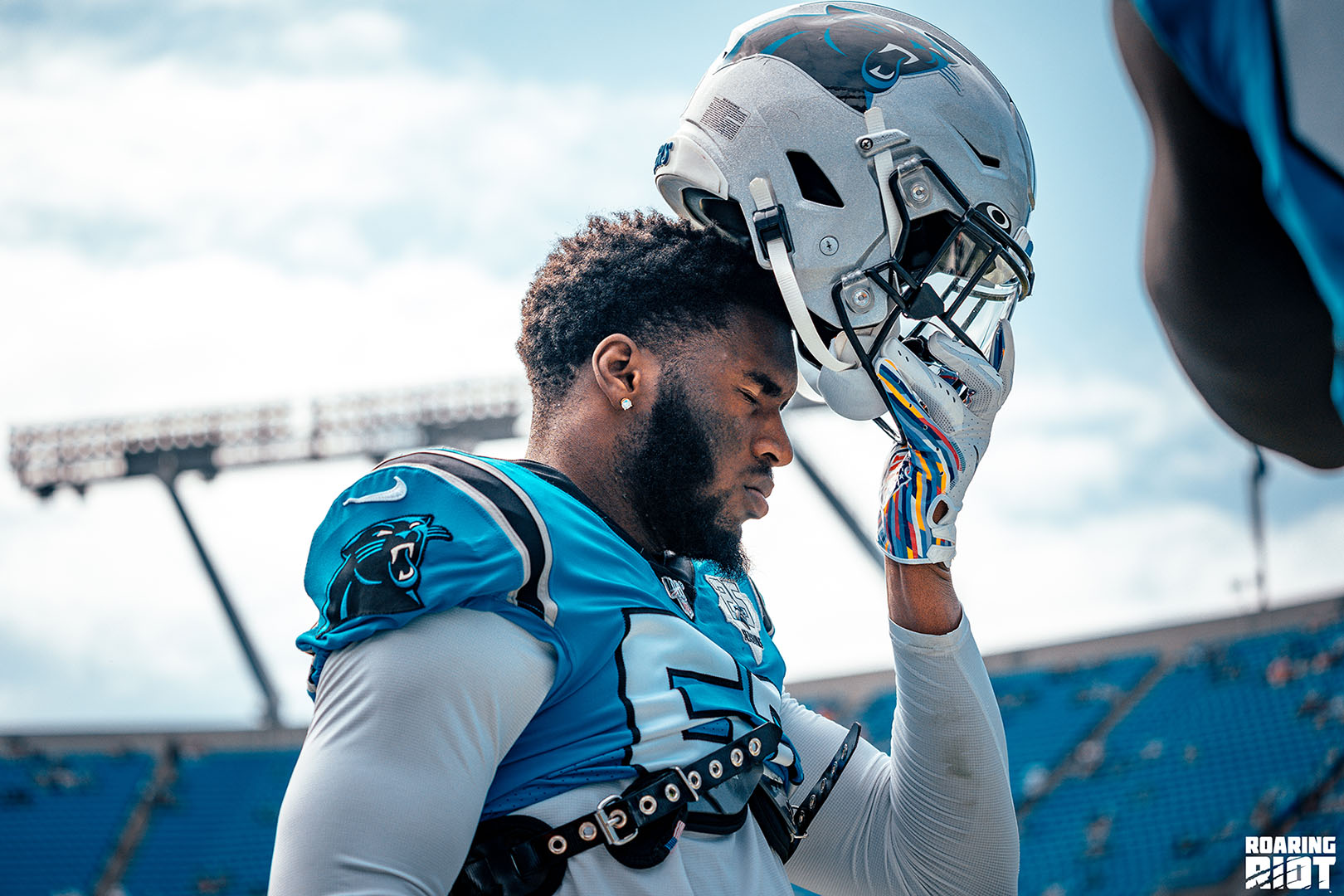 One of the more frustrating parts of the 2019 season for Panthers fans was the usage of rookie edge rusher Brian Burns – drafted with the 16th overall pick, Burns was expected to give Carolina’s defense considerable improvement up front, and he certainly did. However, the way his season finished wasn’t as glorious as how it started.

This statement doesn’t deal with Burns’ quality of play as much as it deals with how often he was playing. In the first eight games of the season, the rookie played 321 snaps (or 40.13 per game) with five starts. In his last eight games, however, Burns only played 157 snaps (19.63 per game) and zero starts.

During this time, Burns was dealing with a wrist injury that obviously affected him and clearly had an impact on how he was playing, so a decrease in snaps would sound reasonable – not to mention the fact that veteran linebacker Bruce Irvin returned from injury around the time Burns hurt his wrist. What doesn’t make sense is Burns’ special teams snaps increased in the last eight games (72 snaps as opposed to 59 in games 1-8). This confusing usage peaked in Week 15 where he actually had more special teams snaps (15) than defensive snaps (7).

I’m heavily focusing on this area because it’s a shame that Burns’ rookie season ended up the way it did. That’s not to say he didn’t have a good year (he certainly did), but the decreased usage took away from what could have been. For what it’s worth, Burns did end up with 7.5 sacks, 16 QB hits, five TFLs and 23 pressures in spite of limited playing time.

He didn’t have a sensational rookie year, but Burns showed more than enough to suggest he’s a potential cornerstone for a defense in severe need of one. With that in mind, let’s look through the first 16 games of his career to highlight his strengths and areas where he needs improvement.

From Week 1, Burns made one of the first big plays of his career in a flash against Rams wideout Robert Woods.

Woods is pictured here getting motioned by quarterback Jared Goff and receives a jet sweep, a staple play of the Sean McVay offense.

With Goff also executing a fake handoff to Todd Gurley, it would be easy to get fooled by the play design. That usually happened for the Rams in their first two seasons under McVay, but here Burns sees right through the design and blows Woods up before he could even process the danger.

This is astonishing vision from Burns. That he’s able to recognize the threat the jet receiver provides is great news for someone that literally was making his NFL debut in this game. It’s very likely that this play would’ve done some damage had Burns not reacted as quickly as he did, but his presence resulted in a loss of four yards.

Next, let’s travel two weeks later to the desert, where the Panthers took on Kyler Murray and the Cardinals offense. Shown here is a similar to play to the one Burns made against Robert Woods where Burns is able to diagnose the play concept.

With Burns trailing him, Murray is faced with intense pressure, having no choice but to launch a pass off balance into the turf.

The zone blocking scheme combined with the rollout to the right shows an edge in playcalling the Cardinals offense didn’t have in 2018, but Burns’ use of hesitation and recognition immediately kills any hopes this plays has of being executed successfully. Burns gets plenty of deserved credit for his athletic ability, but his intelligence should also be commended; he’s a smart pass rusher that’s able to deduce play concepts in a flash and exploit them.

Speaking of athletic ability, you’ve probably heard more about Burns and how quick he is as an edge rusher than anything else. What he lacks in overwhelming power he makes up for in speed and agility, and that helped him capitalize at times in his rookie season.

Let’s go back to the Rams game to pull up our first example of Burns’ speed in practice.

Burns wasn’t credited for a QB hit on this play but he was certainly credited for a pressure here against the right tackle, getting in Goff’s face and contributing to the heavy yet heavenly swarm of pressure.

Burns uses a fast two-step swipe counter to stun the right tackle for a brief moment, making the C-gap vulnerable to an attack. His efforts are more than enough to knock this ball into the ground at BofA Stadium, resulting in an incompletion.

Next, let’s go back to the Cardinals game where Burns actually managed to get a sack against Murray.

Once again against a right tackle, Burns executes a three-step move this time around, freeing himself and chasing down Murray for a swift sack.

No one trick pony as a pass rusher, Burns has an impressive arsenal of pass rushing attacks in his toolbox. Here he executes the three-step swim move, faking a cut inside before pushing off his right foot, lifting his inside arm above the right tackle, and getting leverage outside. Murray slides to the ground to put himself out of his misery, and Burns earns the second sack of his career.

This time Burns transports to Week 17 in a meaningless season finale against the Saints – incredibly he was able to get a sack on now teammate Teddy Bridgewater!

Bridgewater learned the hard way on why you don’t put a tight end on a pass rusher like Burns. I’m sure Josh Hill tried his best, but he couldn’t compare with Burns’ quick swim move, and before Bridgewater knows it he’s in Spiderman’s grasp.

As we can see, there’s plenty to like about Burns’ game, so what’s it like on the opposite spectrum? Let’s take a look and see what areas the sophomore pass rusher should polish up on during his second offseason as a pro.

Yet again we are back at the Rams game, and again Burns is lined up against the right tackle.

Based on this angle, you may be thinking this would be the perfect opportunity for Burns to get a sack, but that wasn’t the case here.

One area of improvement I’d like to see is in Burns’ bend. It’s not awful, but it’s definitely an area that isn’t great, in my opinion. He’s creating the pressure on these plays, but not enough pressure. Shorter cuts inside would obviously increase chances for a sack, and it’s rough because Burns does execute a nice counter chop to get outside leverage.

For another example, let’s fast forward to the Jaguars game.

Burns is again able to beat the tackle and create pressure, but can’t make enough of a bend to bring Gardner Minshew down. You can live with these errors because of the great plays he’s pulled off in his rookie season, though a little refinement in this department would certainly go a long way. Burns could learn a thing or two from Von Miller or even Harold Landry on how to properly use his bend in the NFL.

Finally, a lesser issue is that Burns benefited from several coverage pressures, where he’d get a sack, a hit, or a pressure long after the ball was snapped. These plays aren’t inherently bad, but realistically, you shouldn’t expect a quarterback to hold onto the ball for as long as seven seconds or so.

For example, let’s go to Week 16 at Indianapolis.

Burns is contained for a while by left tackle Anthony Castonzo…

…he’s able to free himself and come after Jacoby Brissett to lay down some punishment.

Burns was the recipient of a few of these coverage sacks/pressures, but at least they’re way better than nothing at all. This is something I expect to see less from him in his second season; not everyone has the rawness of a rookie forever, and Burns should get better with time.

All things considered, there are issues with his game, but Brian Burns is still a quality player that will only get better from here on out. Though he’s not much of a power rusher or one with a killer bend, his versatile usage of pass rushing moves, speed, and great vision are all huge pluses and make whatever concerns I have on him minor moving forward. Really, the hope is that he can get more consistent playing time under Matt Rhule and company – with a healthy wrist, there’s no excuse not to.

And with added defensive line talent in rookies Derrick Brown and Yetur Gross-Matos, odds look better for Burns to continue to make strides in year #2. I’m not expecting much from the Panthers in a crowded NFC South, but Burns should be one of the team’s bright spots in a transition season.