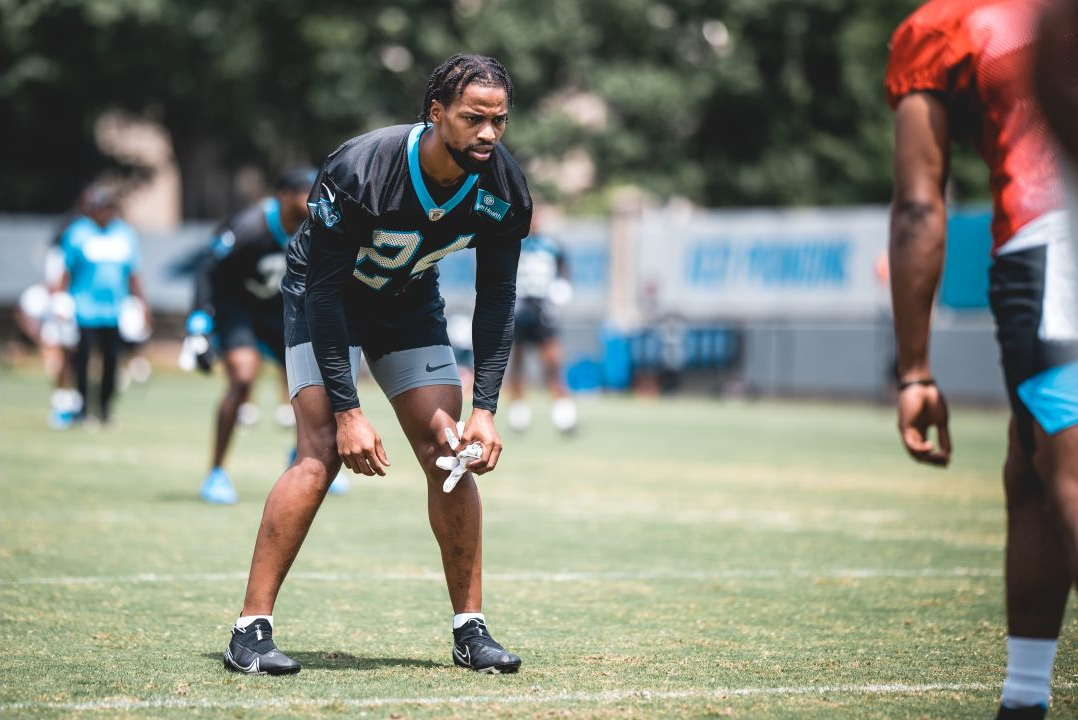 Cornerback was certainly not the Panthers’ strongest position in 2020, and while the injury to Donte Jackson that knocked him out of a large portion of the season certainly didn’t help matters, the Panthers made a concerted effort this offseason to add to the young players they already had on the roster. A lot of attention has naturally fallen on Jaycee Horn, who the Panthers selected with the 8th overall pick and who is expected to start opposite Jackson, but it has been a different corner who has been on the lips of the Panthers’ coaches so far this offseason. AJ Bouye.

“AJ Bouye, I’m so impressed with him” said Matt Rhule during OTAs, “he’s played a long time, but he comes in with a humility to want to learn our system and how we call things.”

Bouye, who has played for the Texans, Jaguars and Broncos in his eight seasons in the NFL prior to signing a two-year deal with Carolina this offseason certainly has an impressive resume with 14 interceptions and seven pass deflections in just 69 career starts, highlighted by a 2017 season where his six interceptions and eighteen pass deflections earned him Pro Bowl and Second Team All-Pro honors. However, after struggles with injury and suspension have caused him to miss fourteen games over the past three seasons, he spoke to The Riot Report about how he is approaching his fresh start and new role as a veteran leader for a very young Panthers’ secondary. 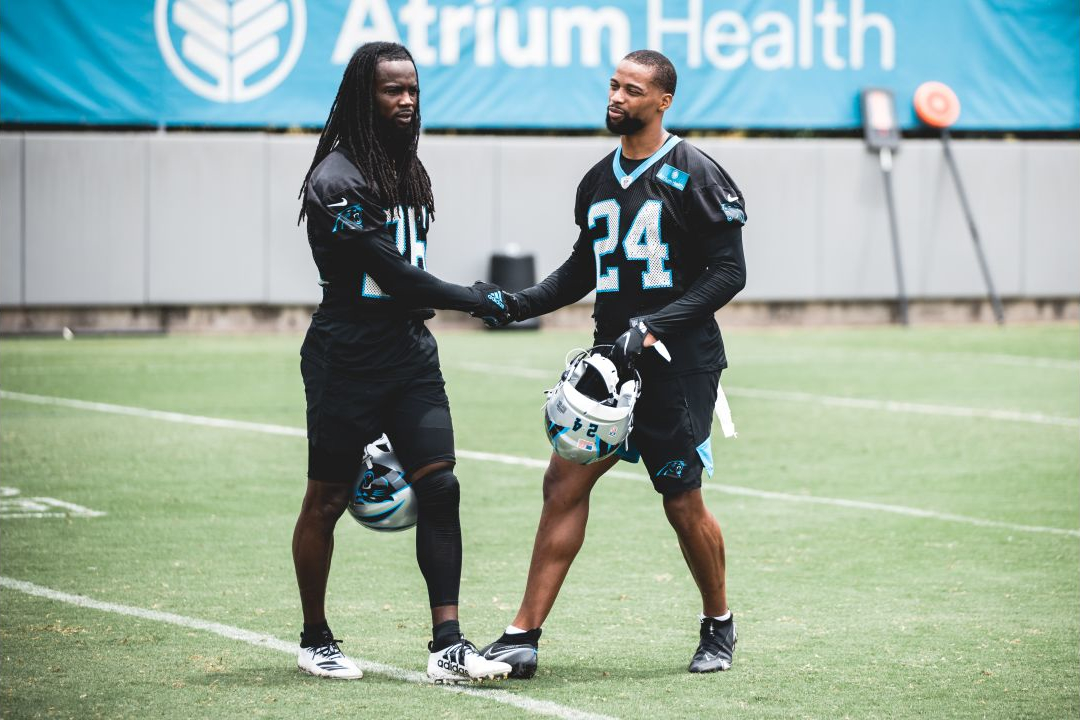 Bouye was one of many players who fell victim to the shrinking salary cap this offseason, being released by the Broncos as a salary cap saving move early in February but, in what was a very strange offseason, he opted to wait until just over two weeks before the draft before opting the sign with Carolina.

“I got a chance to do my research on the coaching staff and you see the talent here” explained Bouye. “It wasn’t really even a money thing, but I wanted to be invested in enough that it showed that the coaches show that they believe I can go out there and help contribute. That’s what they did here, I just felt that it was the best fit on top of being close to home for me and my family in Atlanta.”

Unlike Haason Reddick, who played under Rhule and Phil Snow at Temple, Bouye was unfamiliar with the Panthers’ coaching staff before he met with them the day of his signing.

“I had the opportunity to meet Coach Snow, Coach Simmons, Coach Cooper and Coach Rhule before I signed while I was there (in Charlotte)” said Bouye. “The meeting was great; everything was great and it just gave me even more confidence before I signed my name on that line.”

When he signed with the Panthers, Bouye was viewed as the player who would end up starting opposite Jackson, thereby allowing the likes of Troy Pride Jr. and Stanley Thomas-Oliver to compete for playing time in the slot but, with the Panthers drafting Horn a little over two weeks after Bouye signed, he has been forced to adapt to a slightly different role, and a slightly different position. 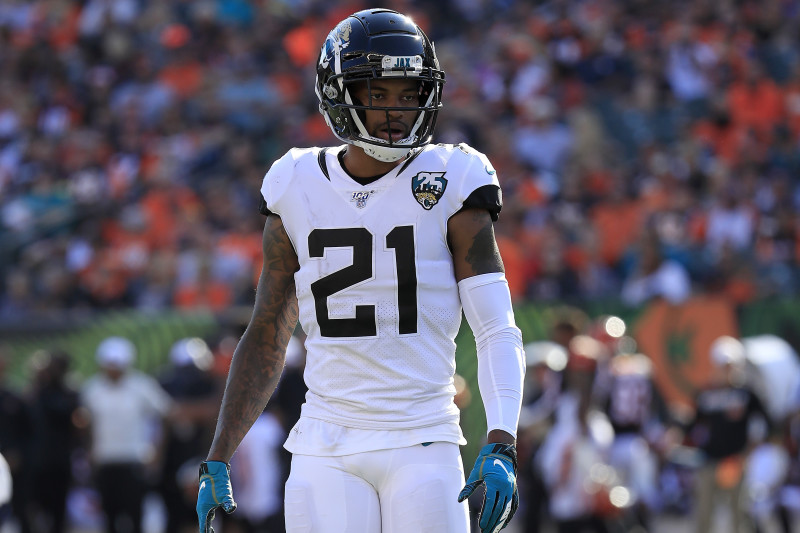 Having played as an outside corner throughout his NFL career, even as a UDFA out of UCF, Bouye has now had to transition to playing more nickel as the Panthers explore ways to try and get all their defensive talent on the field.

“I haven’t really played nickel at all in my career” admitted Bouye, “So It’s been something fun to get used to and I’ve been learning a lot and the coaches have been doing a great job of showing me how to learn things easier in this scheme.”

While there is a lot of carry-over between the two positions, and Bouye is far from the first player to transition from one to the other during his career, but Bouye is now having to adapt to this new role. 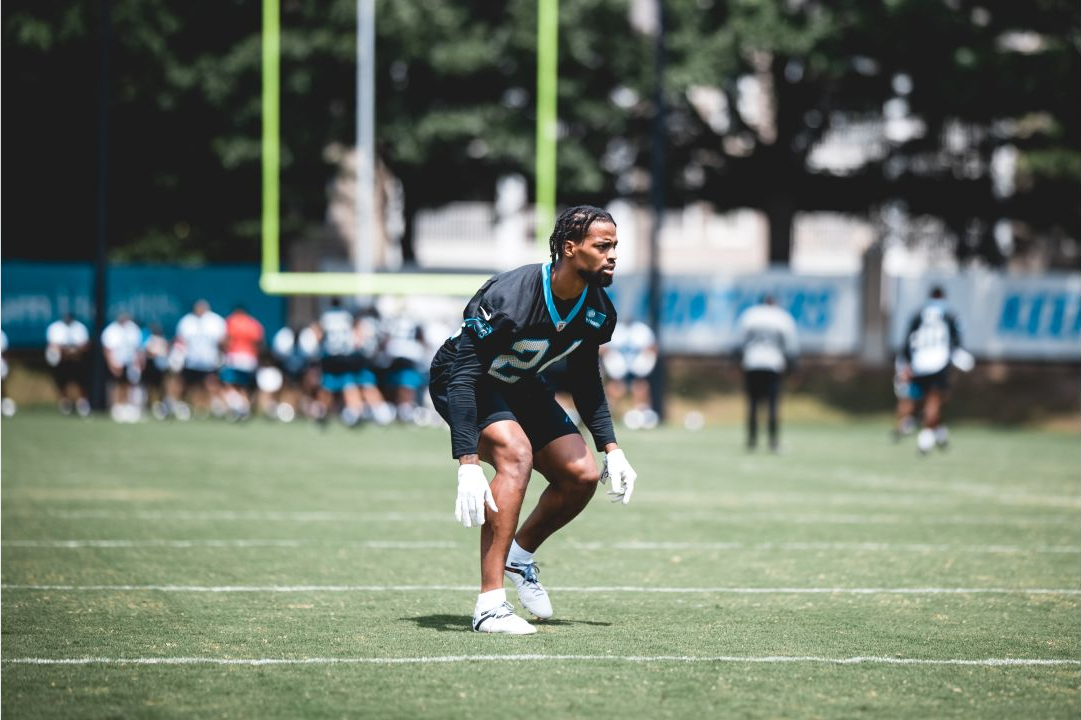 As well as giving them the flexibility to play both inside and out, the signing of Bouye is also something that should help the Panthers realize another of their ambitions for the secondary; to play more man coverage, especially on key downs. This is something that Matt Rhule talked about regarding the selection of Jaycee Horn, and it is also part of what attracted the Panthers to Bouye.

“It was definitely something they talked to me about before (I signed)” confirmed Bouye. “As you can see, not only have they brought me in, they brought Rashaan Melvin in who was known throughout the league as a guy who could just bump and run all game no matter what and play a lot of man. So, we have the personnel now, especially on third down, to just match up with receivers and play man and it’s mano a mano. All the great defenses, they are successful because they know how to stop the run, play man and show up on the most important downs.”

However, as well as the impact the Panthers hope and expect he can make on the field with such a young cornerback room, outside of Bouye himself and their other free agent signing Rashaan Melvin, the Panthers are also expected to act as a leader and mentor for the younger players in that position group, a responsibility that he is not only accepting but embracing.

“Donte Jackson, Jaycee Horn and all the young guys, they’re taking the coaching but they’re also coming to us as veterans and asking us what we see on our reps” explained Bouye. “So, you see that these guys love the game, they’re studying, and they don’t think that they’re better than anybody. They’re just always willing to learn … they’re always trying to pick our brains, whether it’s on the field or how we approach the game, our routines and everything … It’s definitely been a great opportunity to be a leader and lead in that way.” 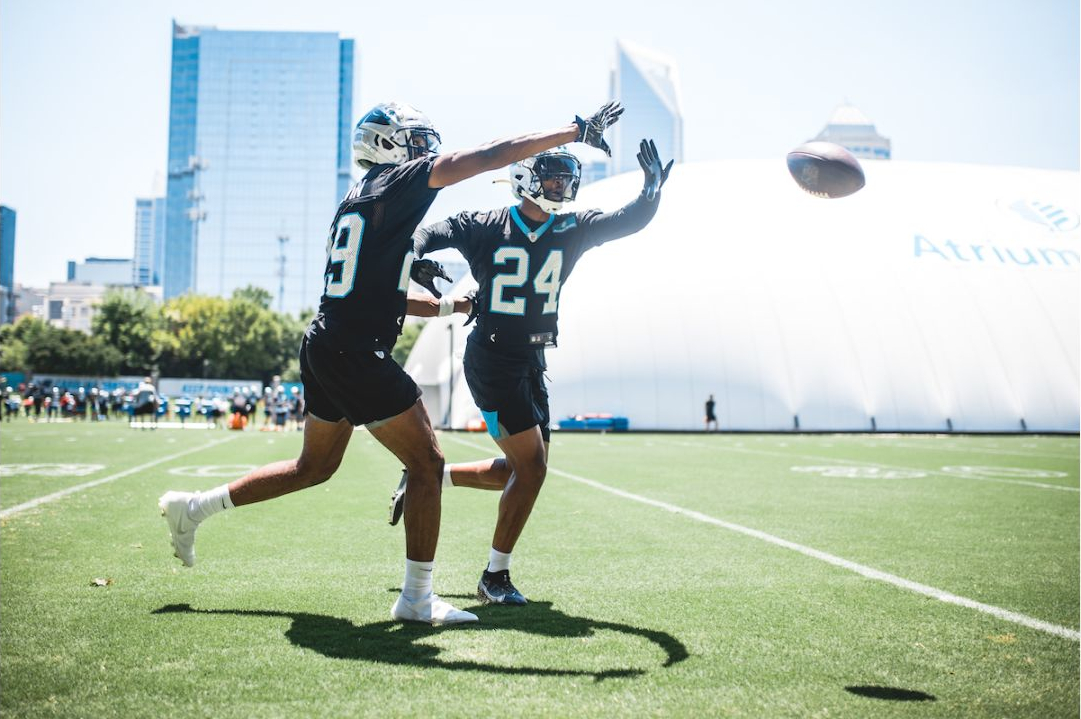 It’s important to understand that the improvement and development of these young players is not going to be a constant ascent, and that a major part of growth is about recognizing the mistakes they are making and working to address them. While nobody likes making mistakes, Bouye talked about how impressed he has been with the attitude of the younger players in not letting their heads go down when they do come up short.

“I’m not the same player I was the first three years. That came with trial and error and learning from my mistakes and studying them” Bouye explained. “That’s one thing that these young guys are doing, each rep they’re getting better and better but they’re learning not to take the failures personally, and they’re always trying to improve. I just love the mindset of these guys.”

He’s also clear that he’s not past learning himself, and that as he adjusts to the new scheme, he isn’t beyond having to turn to one of last year’s rookies to help him out and answer questions he might have about the defense.

“Just watching (Troy Pride) in the meeting room, he’s a guy that helps a lot of people out” said Bouye. “He even helps me out when I have questions because this is my first time in this defense.”

While Pride hasn’t been able to see the field much so far this offseason due to injury, for the 2020 fourth round pick who had an up and down experience when he was thrust onto the field last season this is an encouraging sign, one that the Panthers will certainly hope translates to the practice fields of Wofford College. 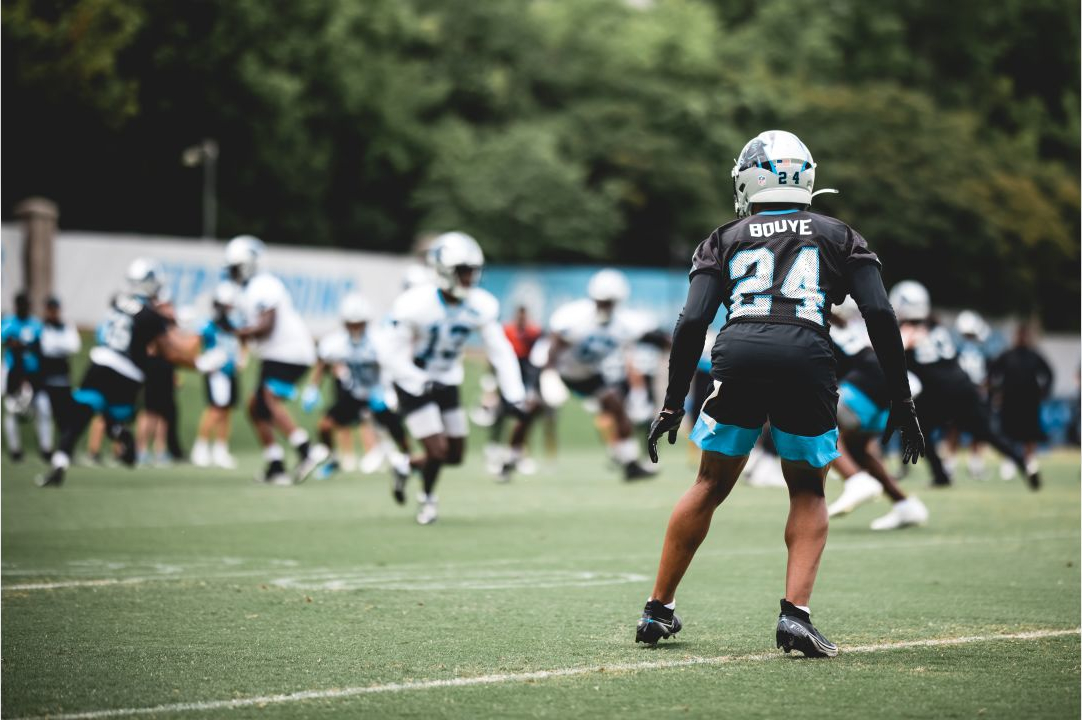 It’s easy to talk about older players being leaders, and there are obviously very different forms of effective leadership, but Bouye seems genuinely to have taken an interest in helping the players around him develop.

“It’s a long season and we’re going to have a lot of young guys playing, we have Jaycee who’s going to be playing and there’s such a thing as a rookie wall and I want to be a guy that can help with that, helping guys push through throughout the season and show them how to keep being a pro whether it’s week one or week sixteen” said Bouye.

The Panthers ultimately signed him for what he can do on the field, and if he struggles on the field then his impact off of it will inevitably be forgotten, but for teams like the Panthers that have made such a concerted effort to get younger, having veterans who can help develop that youth are essential. AJ Bouye is determined to be that, but if he can return to anything close to his 2017 best then he can be so much more as well.