Anatomy of a 90 Yard Drive: The Best-Case-Scenario Kyle Allen Offense 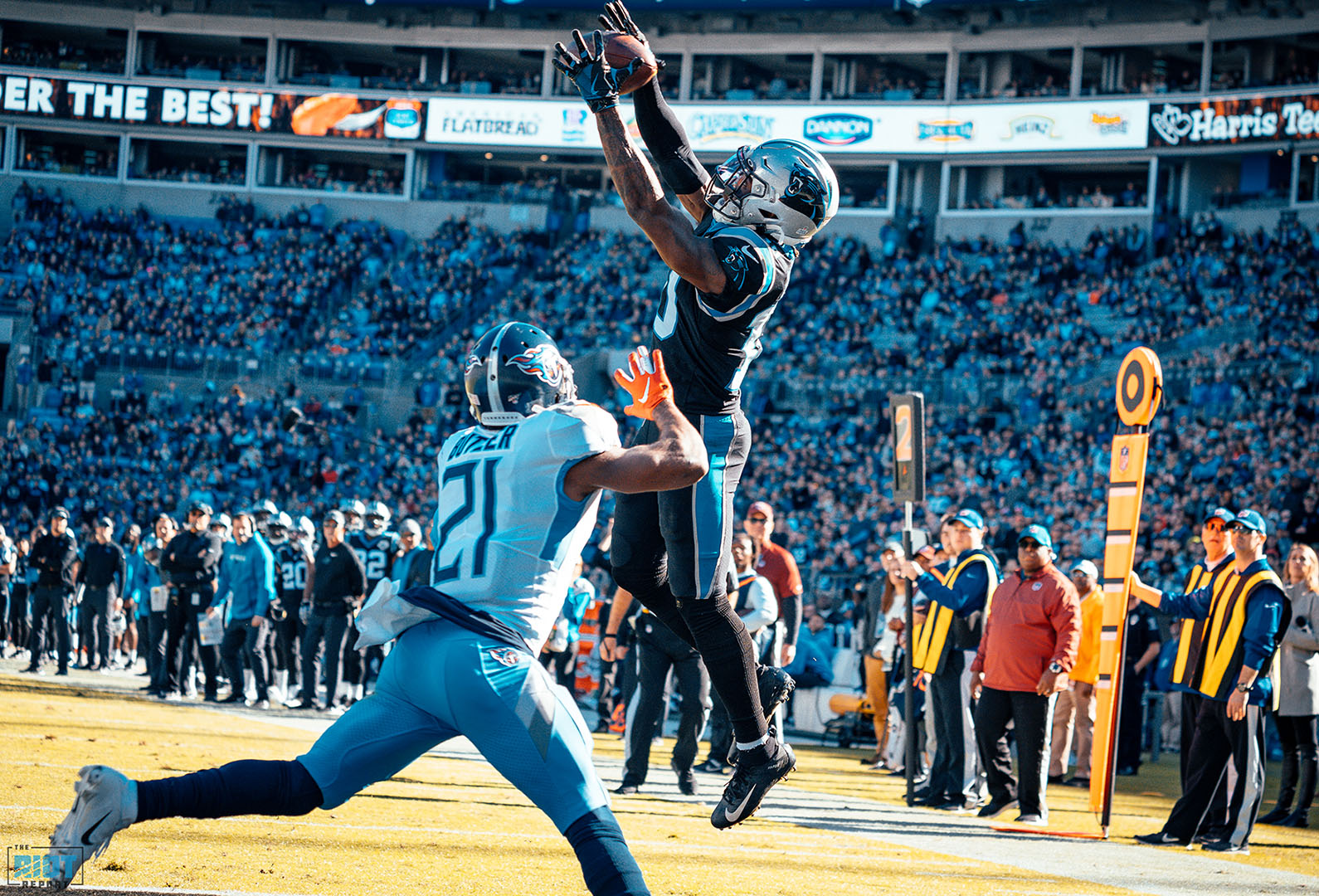 The Panthers got embarrassed last weekend in San Francisco – but that was the only game of the season where the Panthers haven’t had a chance to win it at the end. For the most part, the recipe to a win has been pretty similar for the Panthers; stop opponents from scoring, force turnovers, run the ball a lot and then do just enough in the passing game to keep defenses honest. One thing that hasn’t been a part of that recipe for the most part are long touchdown drives on offense, as the Panthers have relied heavily on short fields and explosive plays to score points.

However, all that changed on at least one drive against the Titans – a drive that started with seven minutes left in the half and turned the ball back to the Titans with under a minute on the clock as the Panthers marched the ball 90 yards down the field for the touchdown to extend the score to 17-0 before the half.

So how did they do it? 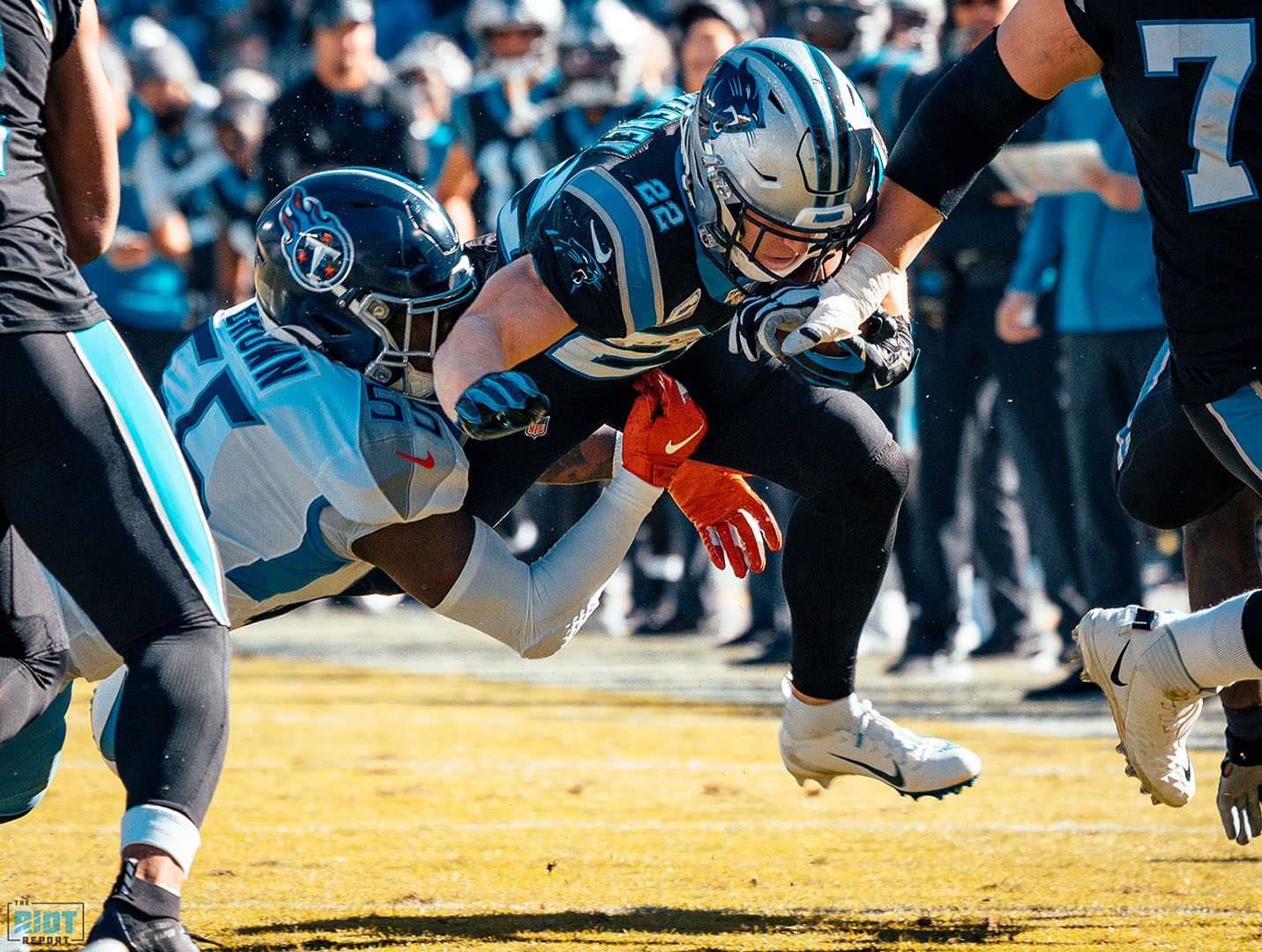 The Titans didn’t come into the game as the NFL’s #2 ranked run defense (via PFR) for nothing, and unlike for much of the season, the Panthers weren’t able to use the running game to keep them ahead of the chains. In fact, of the Panthers 12 plays on this drive, Christian McCaffrey had just three carries for a total of seven yards. However, crucially, they did run the ball at times, and having run the ball relatively well throughout the game to this point, this was enough for the Titans to have to continue to respect the run, something that will be relevant later on.

“Sometimes it goes and sometimes it doesn’t,” said McCaffrey after the game. “But in a day, we know we’re going to get some four-yard, five-yard runs on certain plays and we have a lot of confidence in our o-line that there’s going to be a hole that opens up and we’ll be able to break one. It’s about staying patient, staying true to your eye and staying true to your reads and when there is a hole, you’ve got to hit it, because those don’t come around a whole lot.”

This is something the Panthers haven’t been great at this season – running the ball in order to keep the defense honest rather than just using it to generate big plays. They didn’t run a lot on this drive, but they did run just enough. 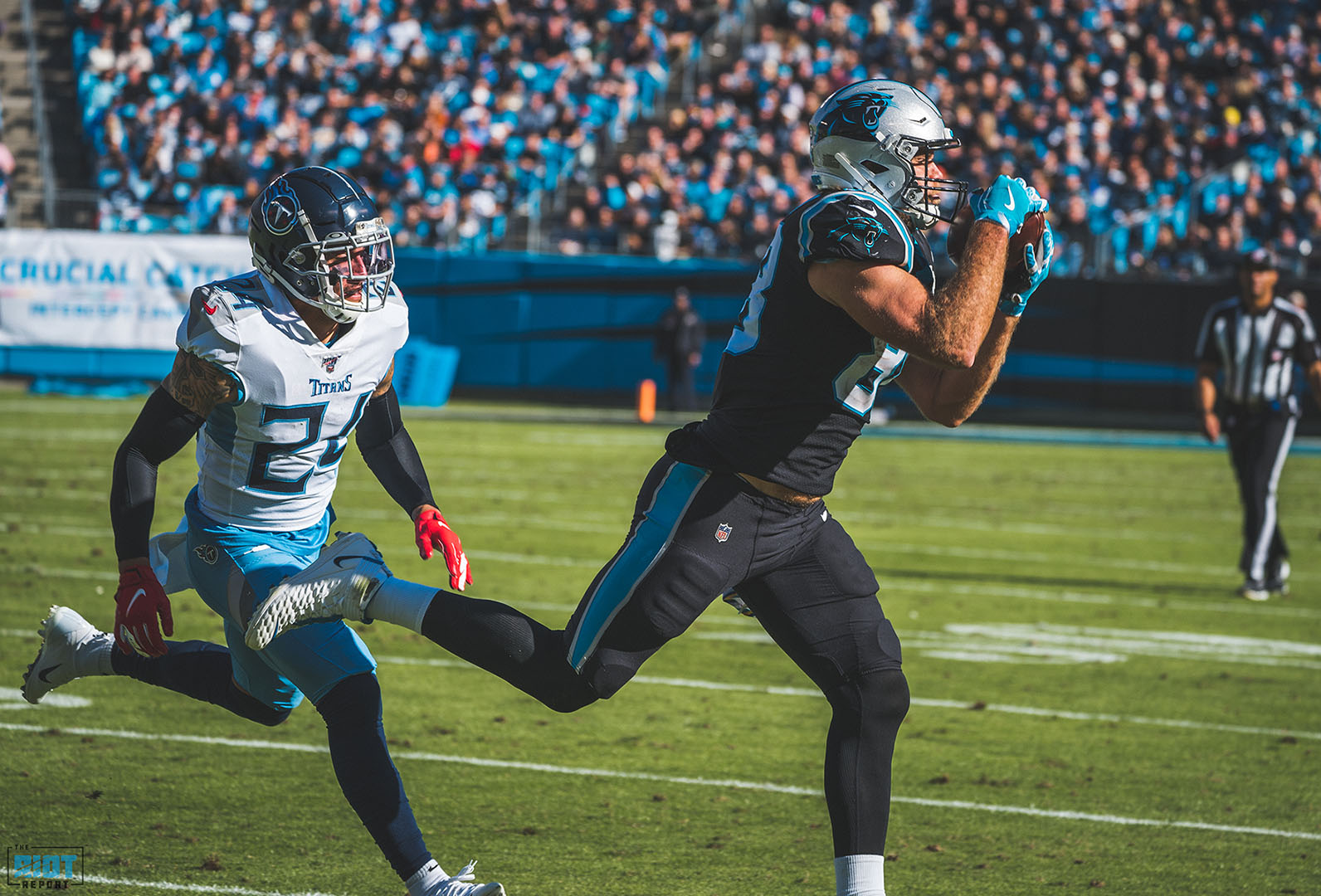 On any long drive, it is unusual for a team to move the ball any distance of length without a few big plays – having started the drive off with a one-yard run, they were then able to follow it up with a trio of decent passing plays to give them 39 yards and move them to the halfway line. The first of these way a twenty-yard pass to Curtis Samuel off of play-action, with Samuel finding a space deep against zone. Allen then hit DJ Moore breaking back to the ball before dropping the ball off short to Olsen against zone.

None of these three plays is anything to write home about, but all three put the Panthers well ahead of the chains and, without having to rely on a spectacular throw or catch, the Panthers were able to move the ball from deep inside their own half to the midway line and now had a chance to try and search for some points.

Where the Panthers have struggled at times in the Kyle Allen era is when the ball is placed in his hands and he is asked to make key plays in key situations – or to make higher-difficulty throws. However, on this drive, the Panthers asked Kyle Allen to do that twice in and row, and both times he came through – just barely.

On the first, the third down attempt to McCaffrey in the flat, he threw the ball slightly too far inside McCaffrey, but McCaffrey was in enough space and has good enough hands that he was still able to come down with the ball and give the Panthers the first down. The second, however, was all on Allen:

Unlike a couple of times on Sunday, Allen did a nice job of stepping up in the pocket rather than bailing out of it, and then threw a lovely ball where only Olsen could get it down the left sideline. Yes, there will be more spectacular throws in the NFL this season, but these are the throws which show the talent that Allen has, with the accuracy and touch to lead the receiver without throwing him out of bounds.

Related:   Four Plays That Mattered As The Colts Blow Out The Panthers

These two throws gave the Panthers the ball at the Titans’ 33-yard line, but not everything went smoothly from there.

Two Steps Forward, One Step Back

Having followed these two passing plays with a solid three-yard run, the Panthers then took a marked step backwards, allowing a frustrating sack with Allen doing well not to lose the ball in contact. For some reason, the Panthers decided to double the 3-tech with Turner and Moton and leave Manhertz to pass-protect one-on-one on the edge. Chris Manhertz is a good pass protector for a tight end, but there is a reason he plays tight end and not offensive tackle, and asking him to pass set against defensive ends seems somewhat imprudent.

But still, Allen didn’t fumble – certainly a step in the right direction.

“I think I’ve watched a lot of tapes of Cam getting hit and holding on to the ball like that,” said Allen. “I’m just tired of fumbling, to be honest with you. So, I’m happy I held on to it.” 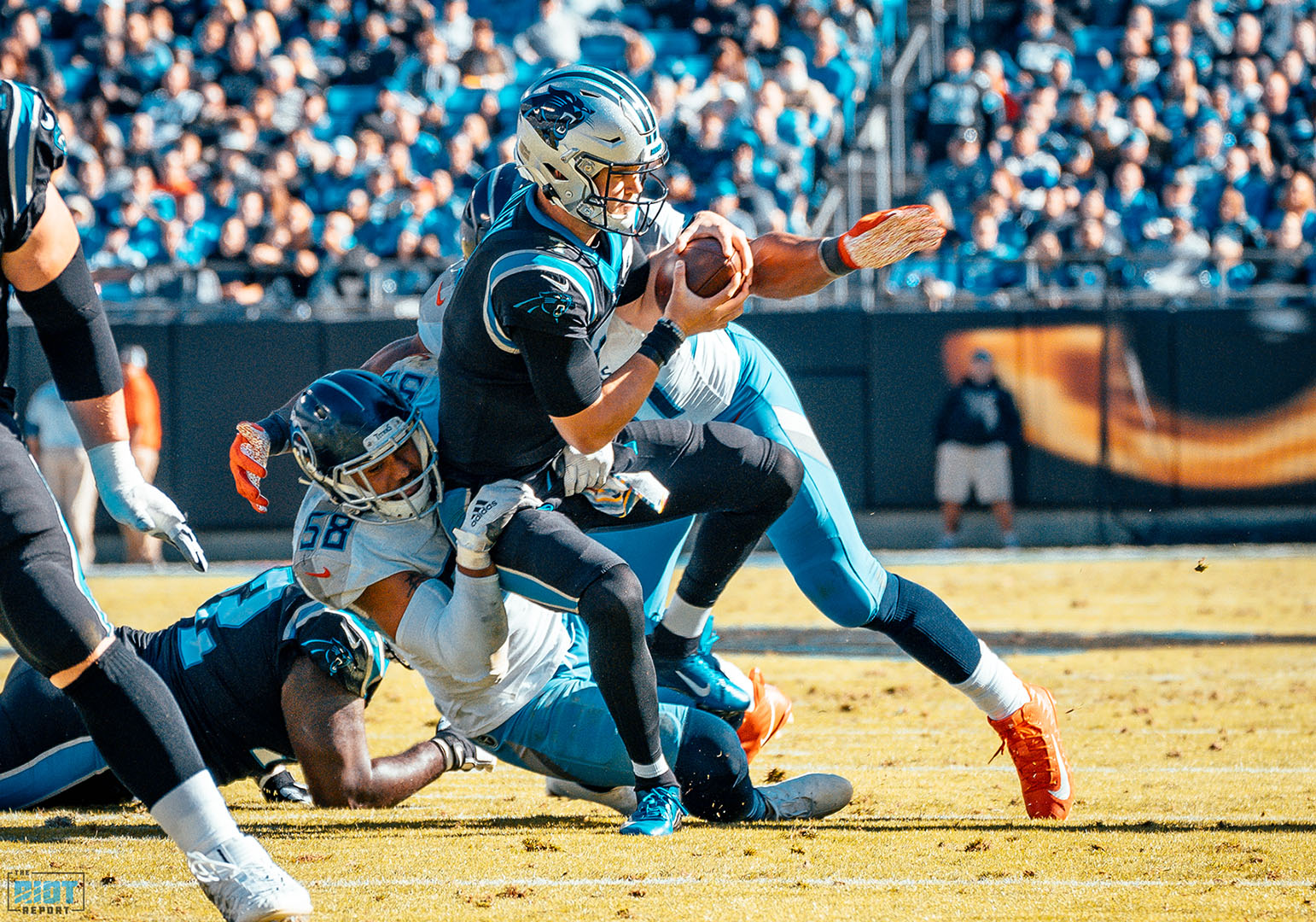 The result of this sack was that the Panthers were left facing a 3rd-and-14 from the Titans’ 37 yard line – in all likelihood looking to get a bit closer to attempt a long field goal. As things happen, that wasn’t how things played out, but it is important to note how close this touchdown drive came to not happening, all because of one protection call.

DJ Moore Is Good At Football

Most teams, when facing a 3rd-and-14 from the opponents’ 37-yard line with a little over a minute left before halftime, look to either run the ball on a draw or throw a screen in order to give them a chance of picking up some yards to shorten the field goal while also running some time off the clock. That was exactly what the Panthers did – it’s just that the Panthers have DJ Moore, and having blocked the play well initially, Moore did a really nice job of navigating traffic and making the Titans miss to scoot for 18 yards and the first down. Christian McCaffrey spoke to the importance of this play to the drive after the game:

“DJ on that third down, screen on the left there – those are huge momentum plays and plays we end up putting in the end zone and you could argue it’s because of that,” said McCaffrey.

And, if it’s not broke, don’t fix it, and with another screen to Moore – who this time just put his head down and barreled for seven yards, the Panthers were left facing a 2nd-and-3 from the 12. Of course, every time you throw a screen to DJ Moore, he isn’t going to pick up 18 yards, but Moore has consistently shown the ability to be a real menace for defenders with the ball in his hand, and when you’re faced with having to attempt a long pass in the red zone, just getting the ball out of the quarterback’s hand makes an awful lot of sense.

This is just an example of a receiver running a really good route against man coverage. He fakes the inside cut at the head of the route and then breaks to the corner flag and Allen puts the ball up and allows him to come down with it. It isn’t the best throw by Allen, but Samuel is just so open that it would have been hard for him to miss. Allen also did well to hang in the pocket and deliver a catchable ball with a free rusher bearing down on him – the backup QB knew what would happen once he released the ball and gave his guy a chance to make a play.

“Yeah, we got the coverage we wanted and that was a double move by Curtis,” said Allen, who completed every pass he threw on the 90-yard drive. “Curtis is going to get open 85% of the time.”

There will be more memorable drives for the Panthers this season – and there was no spectacular catch or 40-yard run, but the Panthers did a really nice job of keeping ahead of the chains for the most part, and when they were faced with third downs, they were able to move the ball and extend the drive.

If this team is going to be relevant as the season goes on, they are going to need to do more than just defend and kick field goals – this drive was a great example of what this offense can look like….if everything goes right.