Anatomy Of A Touchdown: How Joe Brady Schemed DJ Moore To An Easy Touchdown 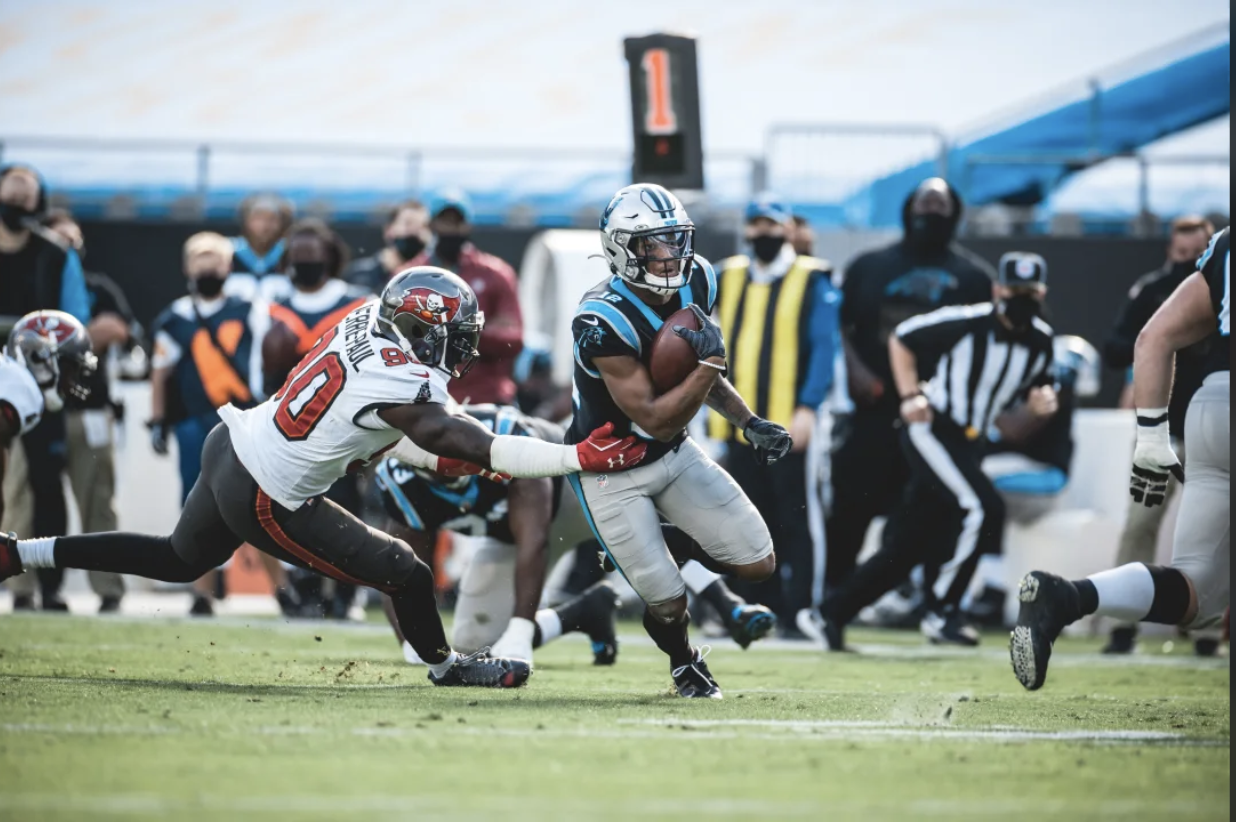 Let’s be honest – the Panthers probably aren’t going to have a fun time going through the tape from the 46-23 loss to the Bucs, but there was one play that caught the eye in a positive sense….DJ Moore’s first half touchdown on his way to four catches for 96 yards in Week 10. While there are a lot of things that the Panthers need to be working on, and that is what they should be focusing on, it’s worth also taking note of what goes well in addition to the negatives. So then, what did the Panthers do to allow them to get into the end zone – and was it their ability or the Buc’s ineptitude?

First, let’s just take a quick look at how the Panthers and Bucs lined up on this play:

By the time Samuel is passing the quarterback, you can already see the play starting to take shape:

Here, the Panthers are blocking as if it’s a jet sweep, with the running back leading around the edge to try and block the far-side linebacker while the near-side edge defender is being left unblocked similar to what you would see on a jet-option play. You can just about see the left tackle and left guard starting to turn back towards the near side of the field – but at this point, the second-level defenders are all committed to pursuing to the far side of the field.

It’s worth noting at this stage that the Panthers get a bit fortunate – at least in terms of the play ending up in the end zone – as the second level defender on the near side blitzes. This means that both of the two highlighted defenders on the near side of the field are left unblocked as they run themselves out of the play.

It is worth considering for a moment that this was in fact a genuine option play, and the blockers on the far side aren’t just blocking to try and sell a fake but because the ball could end up there depending on how the defense reacts.

This might be clearer to see from another angle:

Here, the right side of the line is able to block the left-side corner, the two left-sided defensive linemen and the left-side linebacker, meaning the Panthers are able to have five blockers on four defenders. This is made possible because the jet motion should allow them to get the ball outside fast enough to leave the right-side defensive tackle unblocked and trust that the corner running across the field with the receiver will get caught up in enough traffic to prevent him from making a tackle before a reasonable gain.

Therefore, if the defense doesn’t commit to stopping the jet motion, Bridgewater should be able to just hand the ball off to Curtis Samuel for a reasonable gain, but when they do commit to the motion, he is able to pull the ball and throw the screen:

By the time the ball is thrown, it’s already clear the Panthers are going to have a pretty good chance of putting the ball in the end zone – with the left side of the line now peeling into the flat and with the cornerback still a significant distance from Moore and only a single safety left with any real chance of making the play, all that is required is for Moore to catch the ball and for him, arguably the best receiver after the catch in the NFL, to navigate a pair of blocks to the end zone:

And unsurprisingly, that ends about as you’d expect:

It is hard to know whether Teddy actually had a genuine option to hand the ball off without knowing the playcall, but even if the ball had been handed off, the play would probably still have put the Panthers ahead of the chains – it would make sense for this to have been an option.

Either way, this is a well-designed play, and the Panthers were able to catch the Bucs in the perfect defense to take maximum advantage. This play bucks a fairly significant trend this season – the Panthers have thrown quite a lot of receiver screens without much success at all, and while this is a particularly interesting play design, the bigger takeaway might be about when to call such play. For all of what the Panthers did to give DJ Moore the best chance to get the ball into the end zone, if the corner is playing closer to the line, the ball likely never gets back to the line of scrimmage.

The receiver screen should be a way to attack defenses when they look to back off Moore to take away the deep ball rather than something the Panthers try and force – this was an example of the perfect play design being called against the perfect defense.

And it had the perfect result.