Appreciating The Growth of Derrick Brown 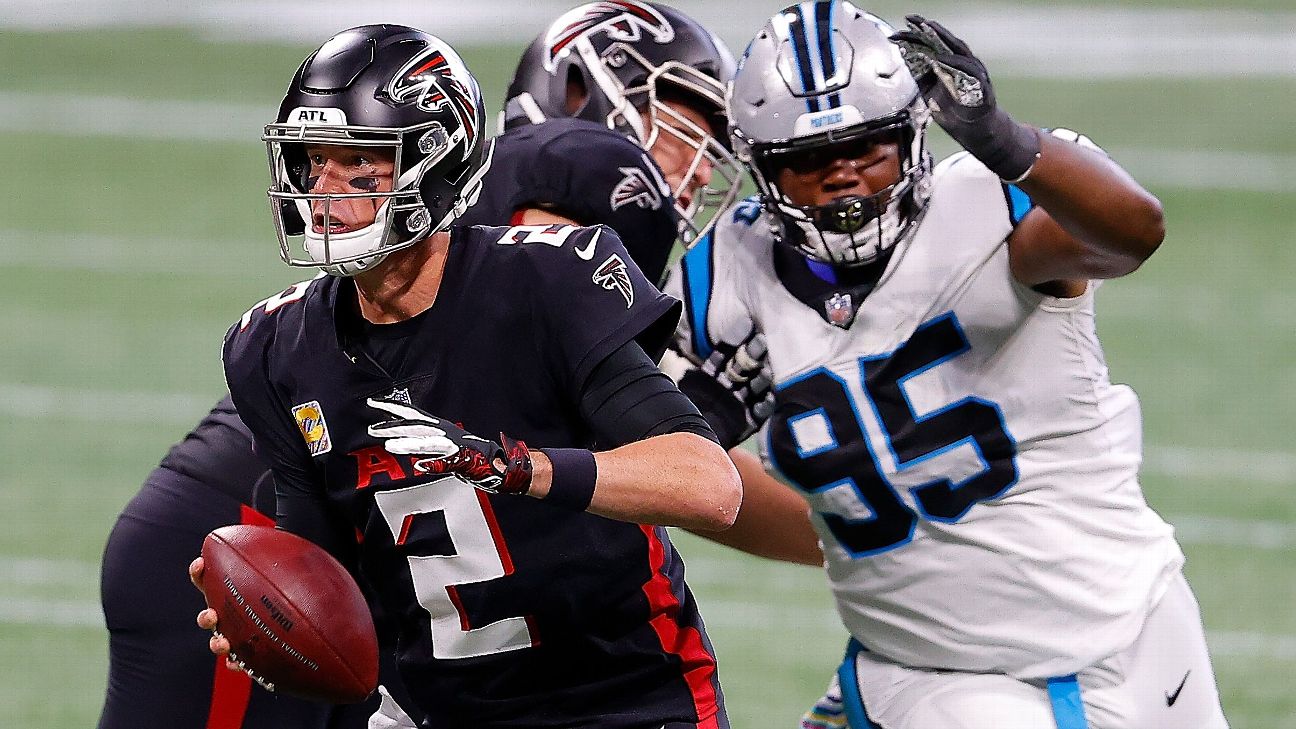 Drafting Derrick Brown over Isaiah Simmons with the seventh overall pick was not seen favorably back in April (as opposed to now when Simmons has played over 50% of the snaps in one game this season and Brown’s lowest usage was 51% in Week 5) – many saw the Panthers in need of a linebacker with the retirement of Luke Kuechly and wanted an immediate replacement in Simmons.

Primarily known as a run stopper, pass rushing was seen as a hollow part of Brown’s game, which is not what you would want from a top ten pick – Brown didn’t see it that way.

“Everyone wants to say I’m a run-stuffer — well, I do it all,” Brown said on draft night. “You can go back and watch my tape. I had the most sacks.”

That hasn’t shown up in the NFL quite yet – however, while he hasn’t gotten to the quarterback this season, he’s been steadily improving, to the point where he has the second-most QB pressures among rookies through nine weeks, according to Pro Football Focus.

“It’s something I’ve had to learn,” Brown said this week about improving his pass rush. “Nobody’s on that Aaron Donald level the first year they come into the league, so it’s one of those things that I hope to progress – and I feel like I’m starting to progress a little bit.”

As a matter of fact, Brown’s six tackles for loss are currently the most from any rookie in 2020. That’s something easily worth celebrating. But in the modern NFL much more is needed (re: getting to the quarterback) – 13 pressures through nine games on 67% of the snaps isn’t blowing the doors off.

That lack of sacks will hold the defensive line back until they get better with age and quality, but I do want to go deeper on Brown’s efforts against the run – because on a young defense short on talent, it provides an elite skillset on a rebuilding roster.

Against the Raiders, Brown went up against one of the very best offensive lines in football in only his first appearance.

Josh Jacobs is a threat and a half himself, but the Vegas blocking is not enough of a wall for Brown on this rep…

…as he rips free and stage dives onto Jacob.

A well timed rip move allows Brown to stop Jacob in his tracks after a mere yard on the ground. This snap presents quality from the rookie, quality that he would continue to show against the ground game.

Against the Chargers’ right guard, Brown attacks high and with good footwork, gradually building up power as he prepares to face the always evasive Austin Ekeler. As with the previous play, a quick, violent rip frees him from the clutches of the guard, and he brings Ekeler down for a loss of three.

This was one of three tackles for loss on the day against the Chargers, bringing about perhaps Browns’ best game of his young career.

Against the Falcons comes my personal favorite play of Browns’ rookie season.

Double teamed initially, Brown frees himself from the shackles of the Falcons center with the swim move, lifting his outer arm over the lineman and giving himself plenty of leverage to work with. An unstoppable force meets a moveable object, and Brown brings Hill down with the suplex.

We know Brown provides plenty of power as a runner, but a flaw (as you may have figured out) comes in his reps against the pass. This was an issue of his at Auburn and it hasn’t gotten exponentially better in the pros thus far. But he is definitely improving – there are a couple of highlights to share.

A two-step move outside allows Brown to get a little advantage over the right guard. Instead of providing the typical power rush, the rookie hangs back and waits for an opportune time to make an alternative play. Looking at Jacobs over the middle, Derek Carr has no idea that Brown is mirroring his pocket movement thanks to the slight leverage over his guard.

Carr releases, but the ball is immediately swatted into the abyss by Brown.

Brown’s violent tendencies on the defensive front also create a Nick Foles interception on this play. With a two step swipe club counter on the left guard, Brown leaves his foe dizzy – and along with a few other Panthers defenders, Brown swarms in on a nervous Foles.

Brown has good speed and burst for a defensive tackle, both of which show up here. The overwhelming pressure forces a terrible throw from Foles that lands into the hands of fellow rookie Jeremy Chinn.

Derrick Brown’s lack of flashes as a pass rusher may seem concerning for a top ten pick, but as a run stuffer he’s been nothing short of outstanding. That may not be the most ideal scenario through nine games – but at least there’s a foundation for him to build off of. His quickness, impressive use of rip and swim moves, and violent nature make him an exciting run stopper, and though this shows up less against the pass, it’s beginning to show up on tape in fits and starts.

His pass rushing will need to improve for him to become one of the defense’s most valuable players, but that seems as if it will come in time.

“I think he’s improving,” confirmed Rhule. “I think he’s going to be an outstanding player here for a long time.”