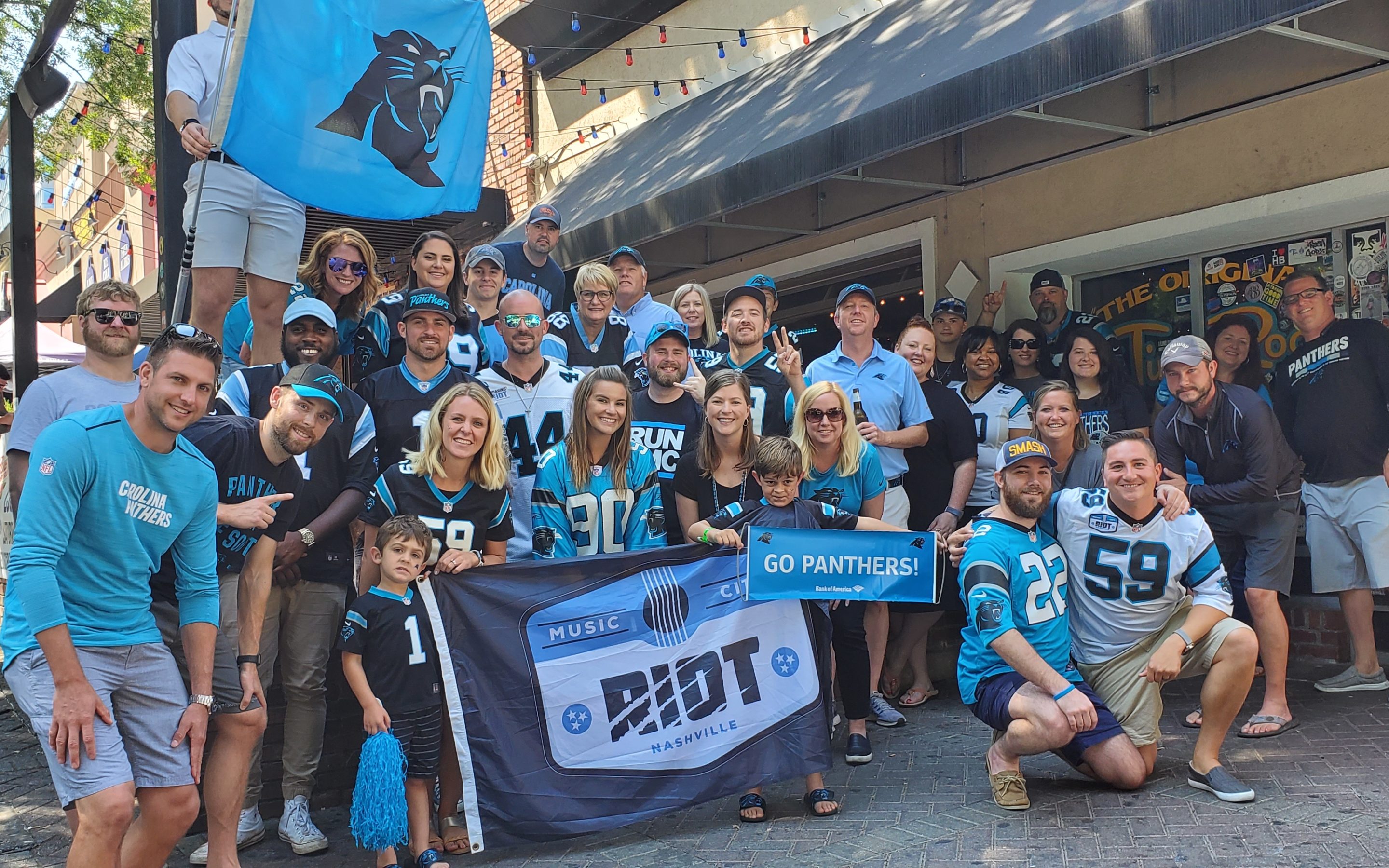 This season, we’d like to introduce you to Panthers fans not just around the country, but all around the world.

It takes a lot to be a Panthers fan outside of the Carolinas – people make fun of you, you’re ostracized at parties, people constantly send you gifs on Twitter of fumbles not being recovered – but The Roaring Riot aims to help alleviate that issue by creating a watch party for your favorite team in every city on the globe. 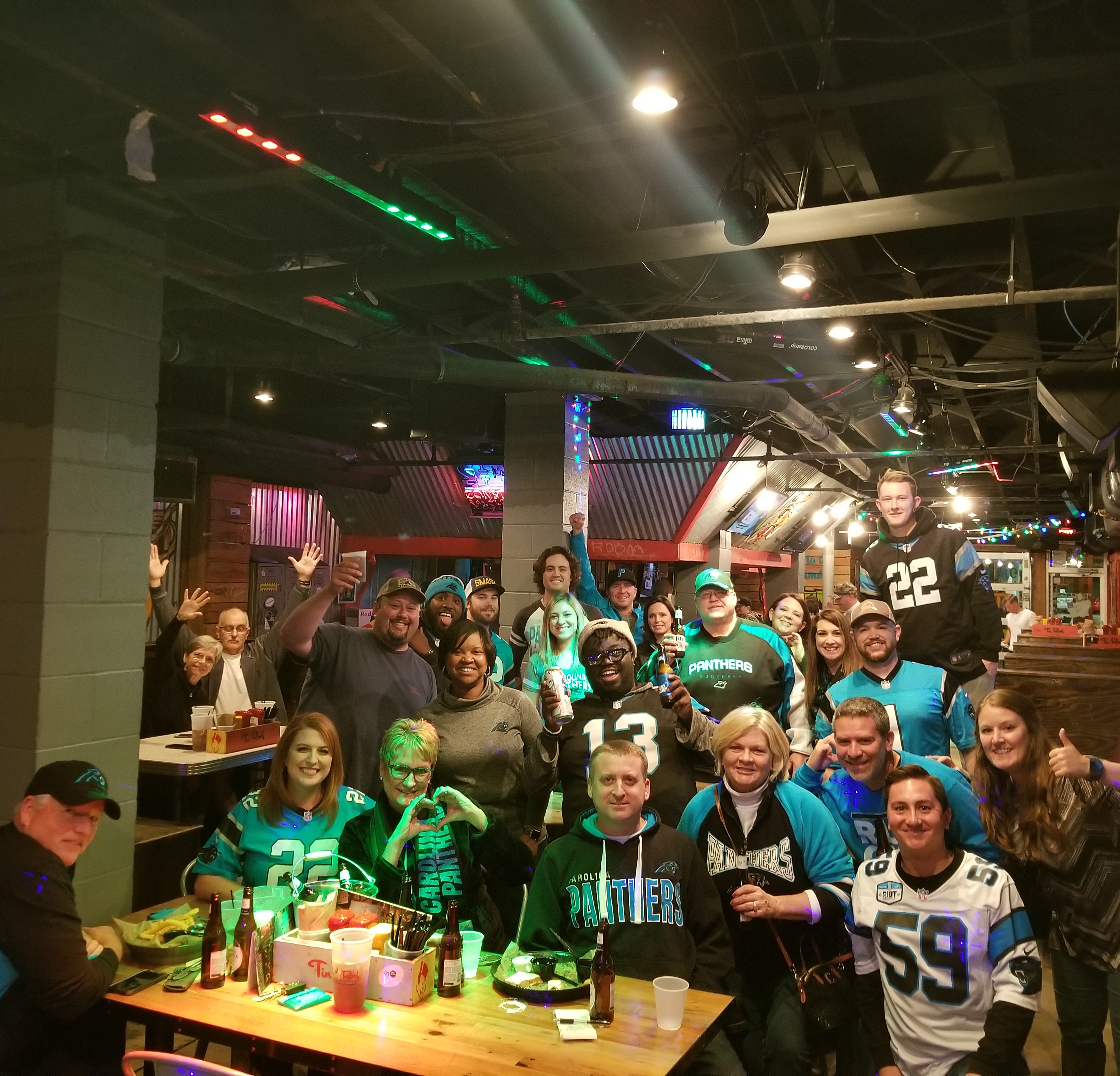 Who Started Your Chapter and When?
I started Music City Riot when I moved to Nashville in 2016 from Atlanta. The first game that season was the Primetime rematch game against Denver and I was sure there would only be a handful of people to come out. We ended up packing the place out and that’s when I knew we would have an amazing group!
How Hard Was It To Find A Bar To Host You?
It wasn’t hard at all as our bar, Tin Roof, was only the second place I asked. There are some other Riot chapters that have their watch parties at Tin Roof so I made that connection with the GM and he said yes to hosting us. I also founded Atlanta Riot prior to me moving to Nashville so that experience definitely helped as well.
Where Do You Have Game Watch Parties?
We watch our games at Tin Roof on Music Row, right outside of downtown. It’s been an awesome location central to Nashville. We are close to a ton of hotels which makes us accessible to all the Panthers fans that visit Nashville.
How Many People Usually Show Up?
We usually average around 30-50 fans depending on the game. We have an amazing core group of members that come out each week, and also have a fair share of fans visiting from out of town since Nashville is a tourist city.
What Traditions Does Your Chapter Have?
We have a variety of audio clips that get played at various points of the game from the Panthers growl after every first down, to the touchdown song “Boom Boom”. We also play clips after certain players make first downs. For example, when McCaffrey gets a first down we always play “It’s Tricky” by Run DMC. That song’s being played a lot this season.

Related:   The Great British Drafting Show: Evaluating The Panthers' Offense
How Do Titans Fans React To A Panthers Fan Club?
For the most part, the Titans fan base is one of the nicest fan bases I know and usually don’t mind that Tin Roof is a Panthers Bar. The area we are in has a ton of different team bars, so Titans fans are used to it.
Why Did You Want To Lead A Chapter?
It’s a bit of a selfish reason – but when I first moved away from Charlotte in 2013, I hated watching the games alone by myself. After the 2013 season was over, I decided that I wanted to find a bar that would host Panther fans that lived in Atlanta so I didn’t have to watch alone anymore. After I founded Atlanta Riot and seeing the excitement people had for having a Panthers bar in Atlanta, I realized that I was filling a need for everyone who moved away from the Carolinas. When I moved to Nashville, starting Music City Riot was my top priority.
What Does Being In The Roaring Riot Mean To You?
What Zack has accomplished in these last few years is nothing short of incredible. I’ve seen the Riot grow from no one knowing what we were to now being a staple in the Panthers culture. It means a lot to be associated with the best fan group in sports.
If You Could Say One Thing to Panthers Fans in Nashville Who Aren’t Members of The Music City Riot, What Would It Be?
What are you waiting for? I have had several members go to Charlotte for a game and get the chance to experience the Riot Tailgate and come back in awe. They couldn’t believe how much fun the experience was. Then you can multiply that experience by 10 when you attend an away trip. Panthers fans that don’t sign up really don’t know what they are missing.
How Do You Think Nashville Will React To Panthers/Titans – Any plans to talk trash around the city?
I know several of our members will be wearing their Panthers gear. I’m sure some trash talking will happen, but Titans fans seem to be disappointed with their team every season, which limits their trash talking. Most of the Titans fans I have spoken to already think we are going to beat up on them. Makes me feel bad about talking trash.
What was the draft like?
The draft was absolutely incredible. Huge shoutout to the Panthers as they gave us several tickets for our members to experience the draft up front. That made the experience even more incredible as we got to watch the draft with 200k NFL fans behind us.
Related:   The Great British Drafting Show: The 2020 Tight End Draft Class 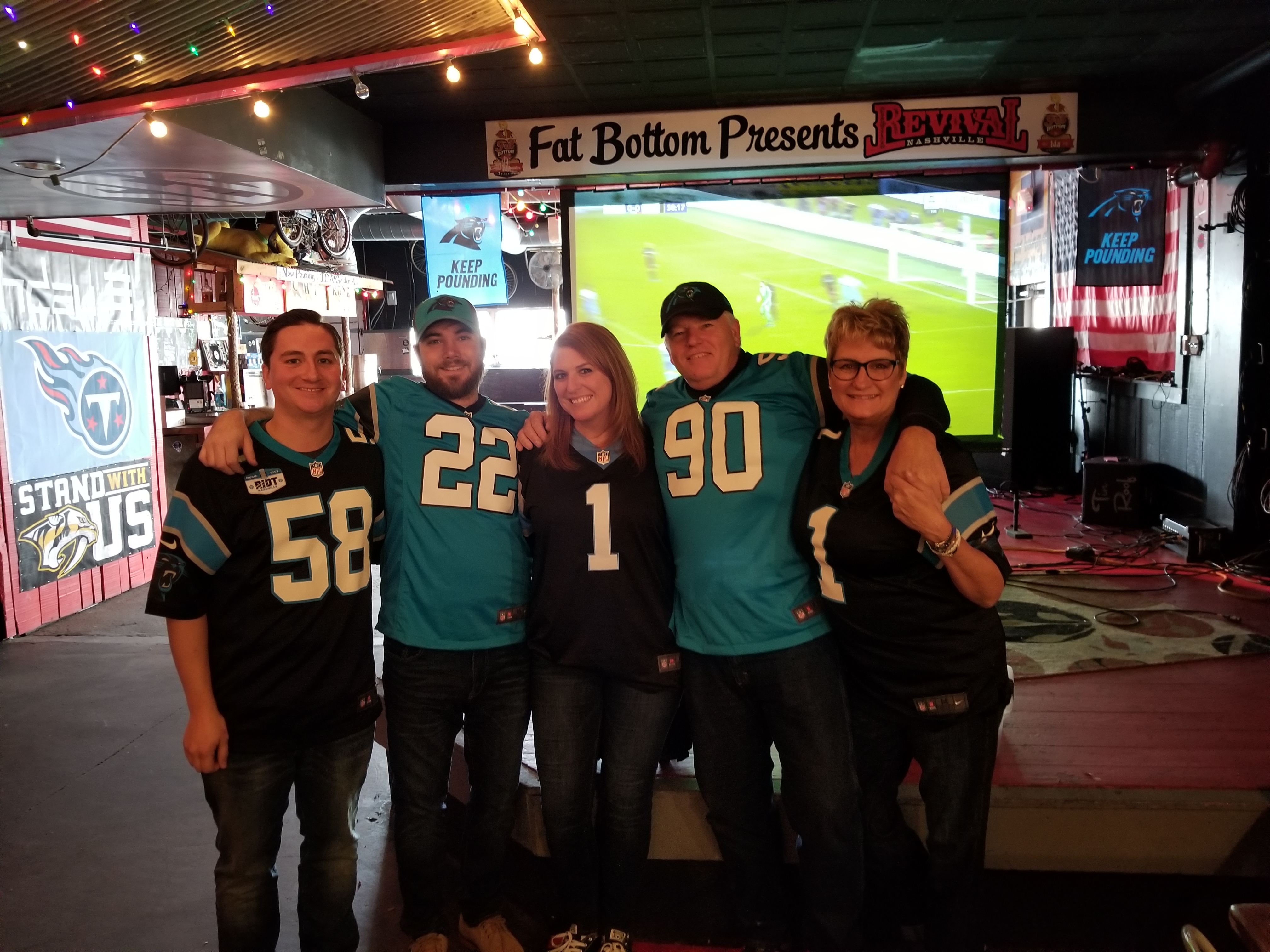 How have you seen the Riot grow in your time with them?
Having just gotten back from our London takeover, it was incredible to see 1,000 Panthers fans travel with the Riot. Back in 2015, the Riot was just starting to grow and had the majority of the members based in the Carolinas. Its incredible to see just how many members and chapters that have spread outside of the Carolinas.
What One Place Would You Recommend Panthers Fans Eat in Nashville? One Activity? One Place To Drink?
Nashville Hot Chicken is definitely a must have for any first time visitor. Hattie B’s is one of the most popular places to go, but I also recommend going to Ole Smokey Distillery in downtown where they have a food truck owned by Princes Hot Chicken. For the best view of the Nashville skyline, go have a drink at L.A. Jackson in the Gulch neighborhood. For the country music fans, the Backstage Tour of the Grand Ole Opry is fun and informative.
When Was the Last Time You Went To A Game in Charlotte?
The last game I attended was last season against the Giants and infamous Gano game winning field goal. It was a great game with a nail-biting finish. My wife is a Giants fan so that made it for an interesting car ride home to Nashville.
Who’s Your Favorite Panther of All Time?
Steve Smith hands down. He gave it all on every play and never let his size slow him down. He will always be the best trash talker in Carolina history as well. Ice Up Son!
What’s Your Score Prediction for Titans/Panthers?
The Titans have some new light with Ryan Tannehill starting now. With that said, I still think there are a ton of problems on both sides of the ball that will keep their team mediocre at best. Carolina wins this one 32-14.