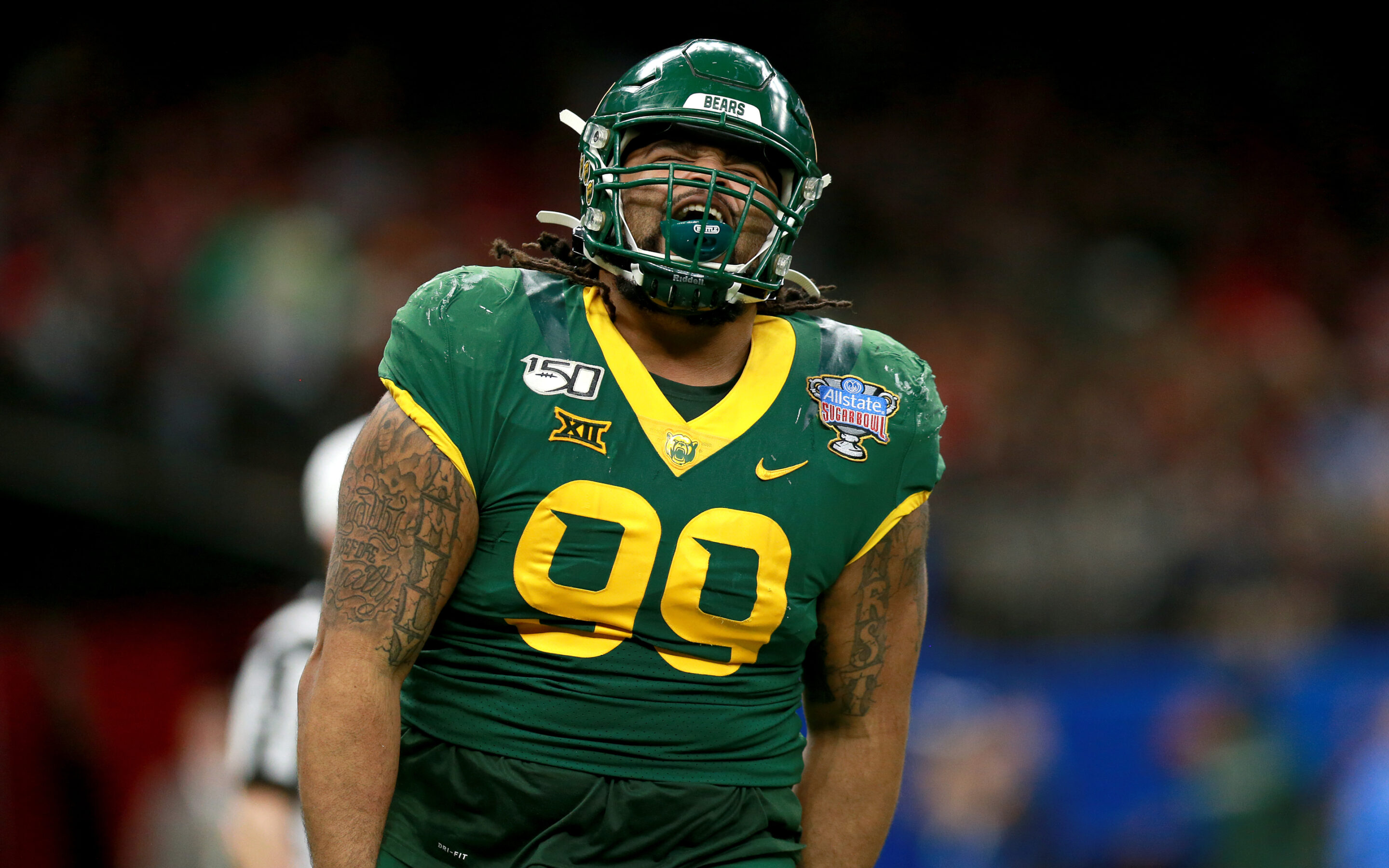 Having already drafted a defensive tackle in the first round, the Panthers double-dipped and addressed the position again in the sixth round, drafting Baylor nose tackle Bravvion Roy. While Roy is very familiar to much of the Panthers’ coaching staff, having played under Matt Rhule and Phil Snow at Baylor, he is less familiar to Panther fans – and so it is worth taking the time to get to know Bravvion Roy, the athlete. While at 6-1 and 333 pounds, it should come as little surprise that Roy is best suited to playing as the 1-tech in a 4-3 defense, but how he gets on in that regard and how he could stand to improve are not as simple.

For players with Roy’s size, the primary expectation is that they will be able to contribute to help stop the run – and in the Panthers’ 4-3 defense, this means working as the 1-tech to force double teams and generate penetration at the point of attack.

On tape, Roy certainly shows the ability to generate push at the point of attack:

And this also allows him to generate penetration by targeting the gaps between blockers:

And also allows him to anchor against double teams, allowing the players around him to make a play on the ball-carrier:

However, while Roy clearly has the natural power to be effective as a run defender, what is important is not the power he can generate, but rather the power he can use – this means getting his pad level down with good knee bend to allow him to drive forward as efficiently as possible. This is one of the primary areas where Roy could stand to improve, as while he has pretty good natural leverage as a shorter defensive tackle, his knee bend is often quite poor and this can lead to him getting jacked up and negated at the point of attack:

This also has a knock-on effect on his hand usage, as when he doesn’t get his pad level right, it’s hard for him to locate his hands with good extension, as he has to bend his elbows in order to get underneath to the frame of the blocker – this poor arm extension makes it difficult for him to keep blockers away from his frame and further adds to the leverage difficulties:

Improving his pad level will therefore be crucial for Roy in becoming an effective NFL player; unless he is able to do this, he is just going to be too easy to move and negate on the majority of plays. However, while this is very much going to have to be a focus for the Panthers’ coaching staff, there are some flashes of him getting both his pad level and arm extension right – so it is something that he is physically capable of, even if he doesn’t do it with the consistency that they would prefer:

He also shows some more developed hand usage that will be valuable if he is consistently able to put himself in a position to use them. Most simply, he shows the ability to use his hands well to work off blocks to make tackles:

And even flashes the ability to work into gaps with good, quick hands:

Roy was primarily used as a nose tackle in Baylor’s 3-4 defense and will probably be better suited to playing the 1-tech in the Panthers’ four-man front, where his finesse hand usage will better compensate some of his issues with pad level and arm extension, but improving in these two regards will go a long way to determining whether he is able to develop into a valuable rotation piece as opposed to just a competent one.