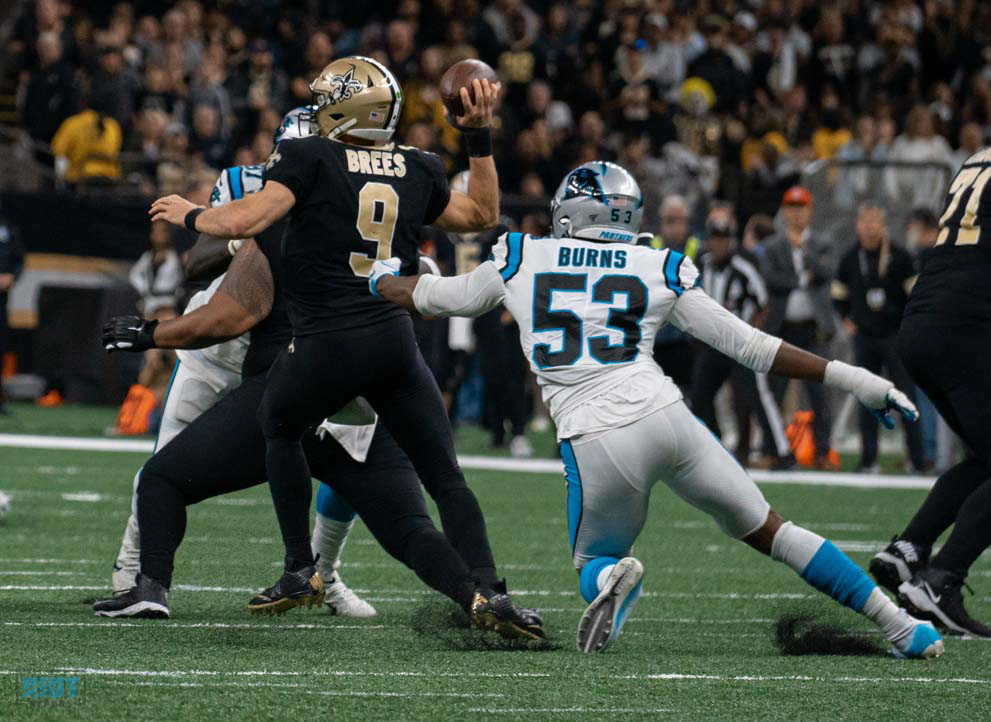 These were the words used to describe what Brian Burns did on Sunday – but they weren’t used to describe coming off the edge and attacking the quarterback, the duty that the Panthers’ first-round pick is usually responsible for – Sunday in New Orleans, Burns found himself in a position he’d never played before, not even in high school.

So when Michael Palardy and the rest of the punt team went out to kick the ball away in the first quarter, it wasn’t 6-0 Reggie Bonnafon or DeAndrew White lining up on the outside – it was the 6-5 rookie. To say the Saints special teamers were surprised is likely an understatement – imagine thinking you’ll be guarding Kemba Walker and Zion Williamson steps to the line across from you.

Sure enough, Burns ran past Delvin Breaux on the outside and was in on the tackle of Alvin Kamara for a loss of two yards.

“Yeah, it was fun,” said Burns, who was gunner on all three punts Sunday. “I mean, it was easy! I’m not downing nobody, but I’m just saying, I’m already kind of fast [is] what everyone say, and I’m bigger than them. So it’s not that hard – it was just fun.”

“It was something different, it was cool.”

Burns, who is second on the team in sacks with 5.5 after sacking Drew Brees in the fourth quarter Sunday, feels as if he is starting to play more like himself over the past two weeks after a wrist injury cost him the ability to grab and pull for almost a month while he wore a club on his right hand – the rookie still had a bandage on his wrist from where he had pins removed Monday morning as he joked  with reporters about his time at gunner.

“I probably did one rep out of the whole week [of practice], like an actual rep, at gunner,” said Burns. “I just got in the game and ran, basically.”

Special teams prowess aside, Burns has now gotten a sack in two consecutive games, although his strip-sack on Matt Ryan occurred on a two-point conversion and didn’t go in the stat sheet, much to the rookie’s chagrin – “A sack is a sack!” – and it’s clear that he’s starting to get back to the way he started the season with 4.5 sacks and a fumble return for a touchdown in six games before the wrist derailed his season.

The coaching staff has noticed the difference – and that’s why his reps in both practice and the games will increase; the team was trying to avoid a setback by having him take a shot to the wrist, but that worry appears to be dissipating.

“He really wasn’t focusing on his hand [Sunday],” said Rivera. “He was productive, he was active, he made a couple of mistakes, but he did the things that you know he’s capable of, so the nice thing is I think he’s past the hand.”

And when you have an athlete like Burns, you want him to be able to use that ability wherever he can, be it as a punt blocker – he’s already gotten his hand on two this season – or as a gunner on the return team.

“You get a guy like that running downfield and being able to take a shot at a returner, something good can possibly happen,” said Rivera.

If Burns gets a clean shot on a returner with a 40-yard head of steam, that ball’s coming out, right?