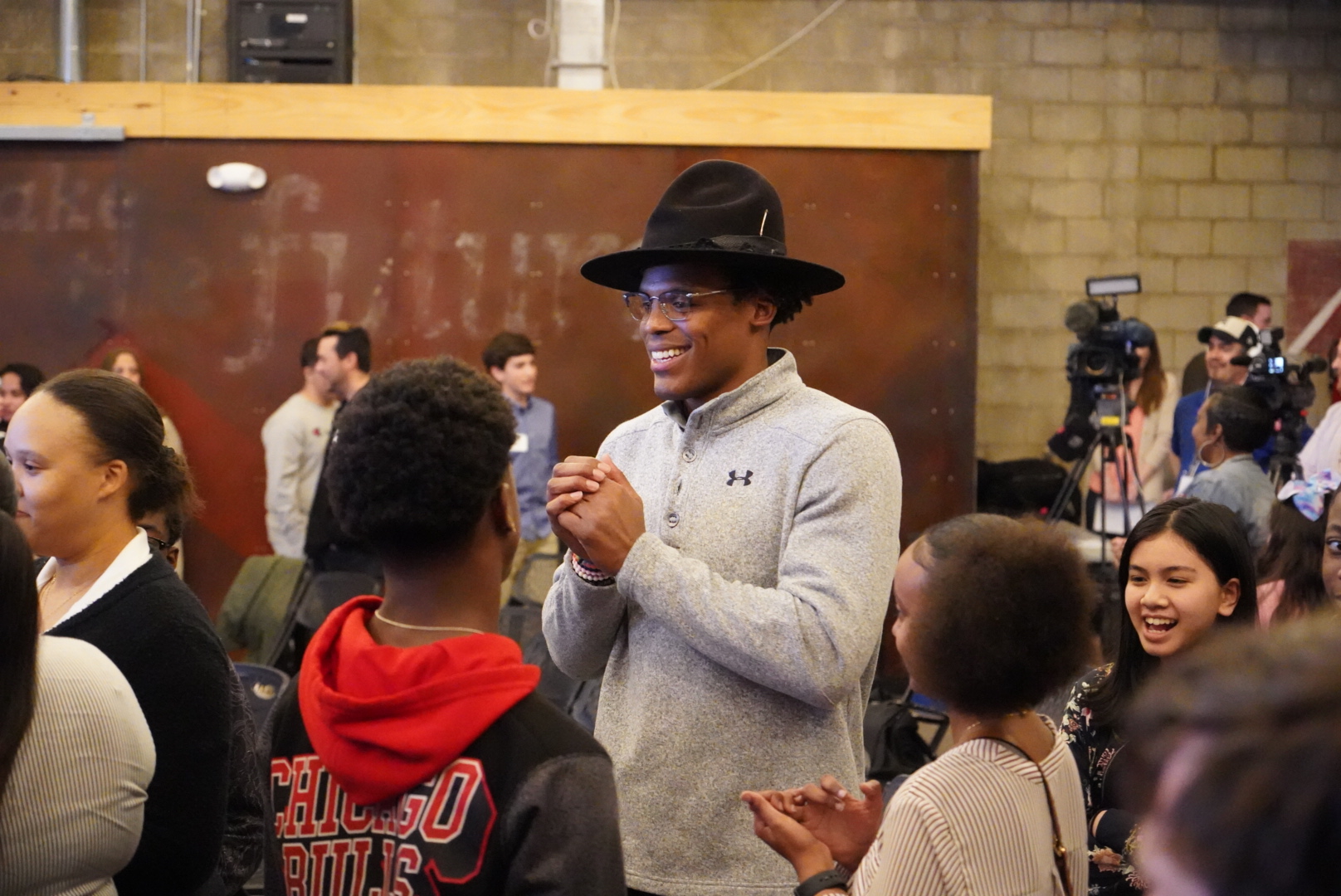 For the second year in a row, Cam Newton stood in front of a group of middle school age children and revealed something that had been embarrassing him – growing up in Atlanta, he didn’t interact with a person who didn’t look like him until he got to college, using his relationships through football to educate himself on people from different backgrounds and ethnicities. As he did last year, he joked about the first time he heard Lynyrd Skynyrd – “What is that?!!??” he said with a huge smile – his lack of exposure to kids of other backgrounds clearly cost him life experience and changed his outlook.

And if he has anything to say about it, some members of the next generation won’t have that issue.

With the Cam Newton Foundation‘s second year of the Un1ted As 1 Program kicking off Tuesday night at Camp North End, the 29-year old quarterback hopes to help 32 middle-school youths from different backgrounds to work together, embrace diversity, understand the power of influence and wield it to impact social change; by introducing teens of multiple ages who were raised in different scenarios, they can discuss real issues in today’s society and see those issues as opportunities for positive change – and that starts with Newton himself.

“I’m making sure that I use my influence in a way that allows kids to come together at this age to see a broader vision of life as a whole,” said Newton. “Difference is OK. Something that was extremely rewarding for me was being able to be in a room full of differences – religion, ethnicity, male, female, sexual preference or identity – and for anyone in that room to leave understanding [the] situation better.”

A chance that Newton wasn’t afforded himself.

“I really was illiterate to the fact of how other people thought because that wasn’t something that I was privy to – especially in the environment that I was in.”

Newton answered questions from the evening’s host and executive director of the CMS Foundation Sonja Gantt as well as the kids, ranging from whether he would follow one of the middle-schoolers on Instagram – “that’ll cost ya,” to how they can make changes in their own world – “even though you’re looking and saying how this is a big ol’ world and I can’t affect this person and tell him not to be racist, but you can affect the people who are around you the most – we can impact change in our own world and that’s making the world a better place.”

And when you’re an NFL quarterback who battled a shoulder injury for the second half of the 2018 season, the questions will inevitably turn towards football as he was asked how that shoulder was feeling after a January arthroscopic procedure.

“It’s alright,” said Newton, who said that rumors of the 2015 MVP sitting out the upcoming season were not to be believed. “Everybody’s concerned; I’m concerned. Just seeing that as we go through the year and expectations and just knowing that a lot of people live vicariously through you.”

But while Newton makes strides on the field, his responsibilities off the field loom large – being a unique person that not only embraces, but celebrates, their individuality makes him a role model for children of all backgrounds, including those that are different from his own.

The Foundation will partner with the Winters Group, a global diversity and inclusion firm that has been specializing in creating transformative and sustainable solutions for organizations in support of their efforts to create more equitable and inclusive environments for over thirty years, to help those middle-schoolers selected from Alexander Graham, Piedmont IB and Sedgefield middle schools embrace diversity and find ways to change the worlds around them for two days full of learning and activities at the end of the month.

He wants to bring those children together, discuss the problems each of them are facing and finding solutions in their own worlds – they might be surprised about how similar they actually are.

“No matter how weird you may come off to somebody else or how you may look – what makes you different than others is the same thing that makes you yourself,” said Newton. “As you grow and you identify who you are as a person, there’s going to be good times and there’s going to be bad and I think during the bad times are when your support cast grabs you closer and says, ‘I’m here. I want to hear you talk, I want to see what’s going on, I want to help you and direct you in ways that you may not think I know, but I know.”

“I think that’s extremely important for these kids to have an outlet not just to talk, but them coming up with social issues that they want to talk about –  and then we attack them like that.”