While most Panthers fans spent their Tuesday night still trying to emotionally recover from the team’s five game losing steak, Cam Newton spent his working on a different streak of five – his Fifth Annual Santa Cam event where he spreads holiday gifts and cheer throughout the Charlotte community to those in need.

It’s all about perspective.

While I admit I am one of those aforementioned fans, getting the opportunity to spend the day with Cam while he made five stops along his Santa route and to witness the joy he brings at each location with his presence – and presents – I’m happy to say I’ve been brought back to my normal self.

I think it’s safe to say that Cam has been too.

While the haters outside of the Carolina Panthers fans community – and some inside of it, unfortunately – like to paint Cam as a whiny baby and a poor sport; even in the middle of this on-field losing steak, Cam was able to fully engage all of the surprised guests at each of the stops with his beautiful smile and infectious personality and genuinely enjoy the reactions and interactions he received all night. Cam has said many times that it’s his mission to use his platform to positively benefit others; but even more importantly, he continues to walk it like he talks it.

I’m very proud that Cam Newton is our quarterback. You all should be too.

The 2018 Santa Cam route was set to visit five different locations in the Charlotte area to distribute over $100,000 in cash and gifts. The first stop of the day was at Shamrock Gardens Elementary School, which is a Title 1 school that has recently moved from a “D” school to a “B” due to their rapid improvements in reading and writing. Cam greeted the students, spoke briefly about the importance of teamwork, asked the kids if they were excited for Christmas, and then quickly departed onto what seemed to be the next stop on the route. In all honesty, my first reaction was to be a little concerned that maybe Cam was not in the mood for the event because of the short interaction with the students.

However, three minutes later Cam came rolling back into the school gym, literally, on a new bike decked out with the Superman logo on the handlebars. Through a partnership with Academy Sports + Outdoors (also a Roaring Riot partner, aye!) CNF donated bikes, helmets, and locks to all the students. Cam always loves surprises he gets during these events, and his reemergence with the bike was no difference (other than this one even fooled me).

If y’all want to see Cam Newton donating over $100k worth of gifts to local kids – go check out our Instagram story, we’re traveling with Santa Cam ALL DAY! It will warm your heart on this cold December Tuesday. pic.twitter.com/kHpph5FAE2

For the second stop, we cruised over to the Second Harvest Food Bank to meet the kids from Greeley Elementary. Greeley is located in a very poor and rural area close to Myrtle Beach; many of the families in this area had been negatively impacted by the hurricane. The students took buses up to Charlotte for a “celebration event” – which for most was their first time out of their own county. The screams and cheers erupted when Santa Cam and his elves walked in carrying $20K in cash – actually large checks, but you know what I mean – and backpacks filled with supplies for each of the students; DJ Vinny was there to entertain the party, which Cam quickly turned into a five student game of musical chairs – which turned into a dance-off between the final two students – which then turned into a dance-off between two teachers to “break the tie” – which then turned into both students winning. And before leaving this stop, and just like every stop, Cam makes sure he takes selfies with everyone in attendance. 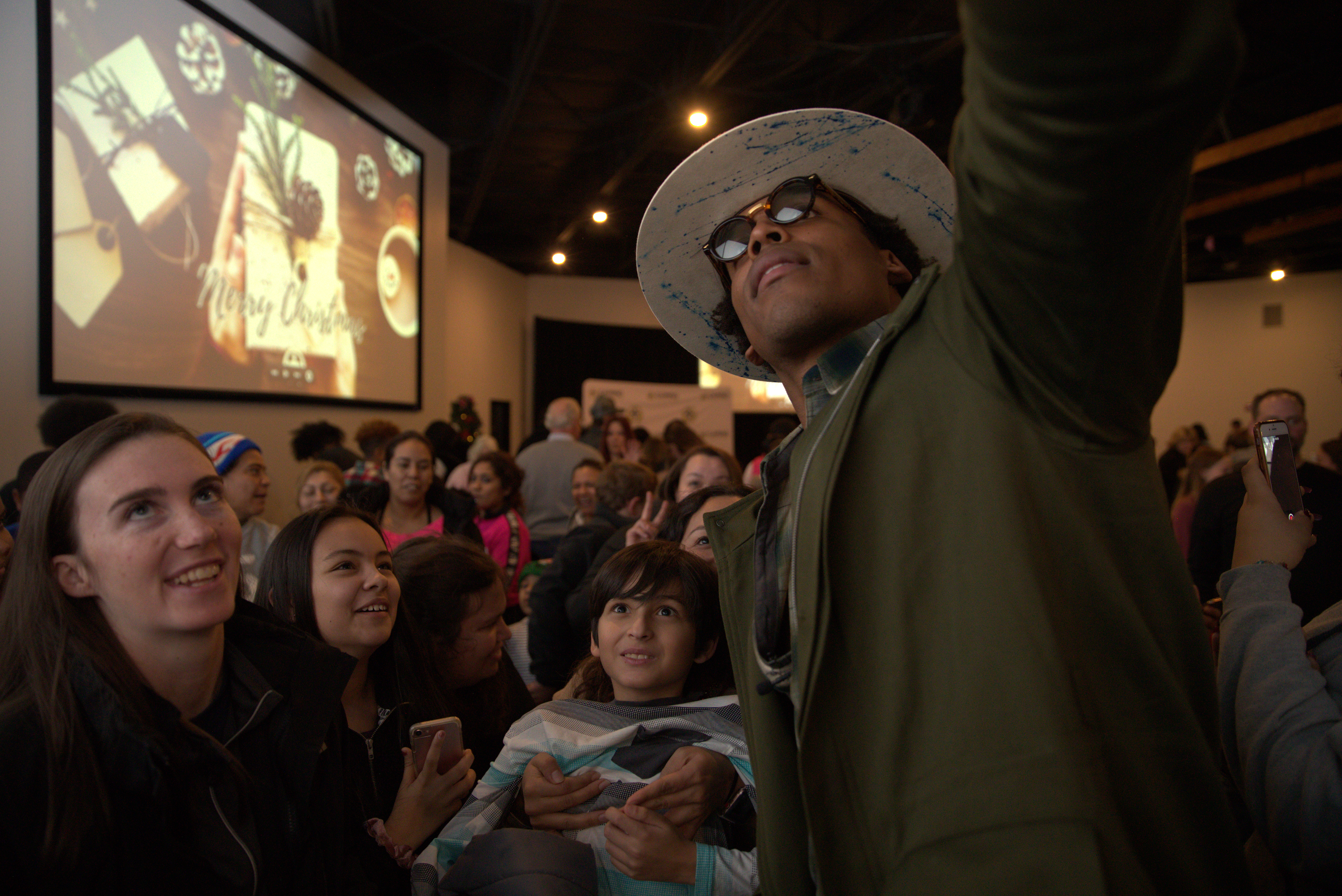 It’s no secret that Cam is a superstar when interacting with kids, so it was great to see how he responded at stop three – the Urban Ministry Center of Charlotte. At this stop, CNF donated another $20K in cash and brought gift bags for all of the Center’s members who were present. The gift bags were filled with socks, gloves, hats, and other items to help make sure the members were warm during this winter season; Cam toured the Center and when speaking privately with the center’s director I overheard him say that he was taught at a very young age that no matter what, a homeless person is still a person – that Cam recognizes he was given a gift with his abilities as an athlete, and that not everyone is as fortunate to be dealt the same kind of cards. And that he understands that his abilities and fame do not make him a better human that others. It was quite touching – I also believe him. The multiple times that people have spotted Cam walking around cities handing food to homeless people he passes on the streets reinforces it.

Stop four took us to the Bethlehem Center. Cam brought another $20K – you catching the pattern here? – and several computers for the after-school program. The kids were also treated with a pizza party, where of course Cam passed out the slices. Some of my favorite interactions from that stop:

Kid: I need some sauce
Cam: Maaaan, the sauce is in you, not for dipping your pizza

Cam: what kind of pizza you want?
Kid: Cheese
Cam: What’s a F word that rhymes with Cheese?
Kid: Fleas

Our fifth and final stop took us to the Camino Community Center. Camino severs primarily Latino/Hispanic low income families by providing health and wellness programs. At this stop, in addition to the monetary gifts that the Center will use to update its technology and services, Cam entertained the crowd by participating in a Zumba instruction, one of the most popular classes at the center. 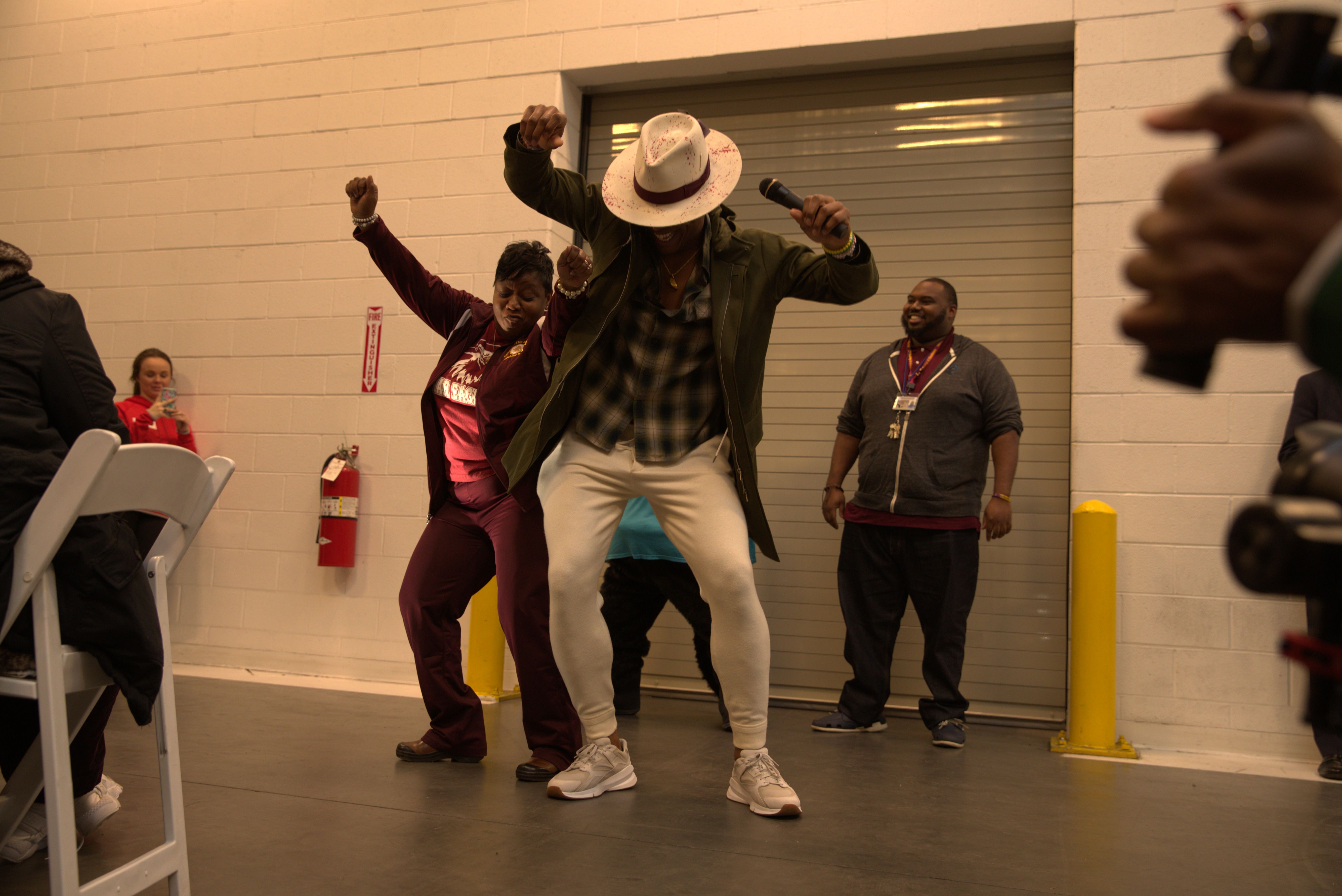 At the end of the day, all five stops were different – but the goal of the CNF assistance and impact was the same. As was Cam’s repetitive delivery of “I just wanted to come by and help spread some holiday cheer.”