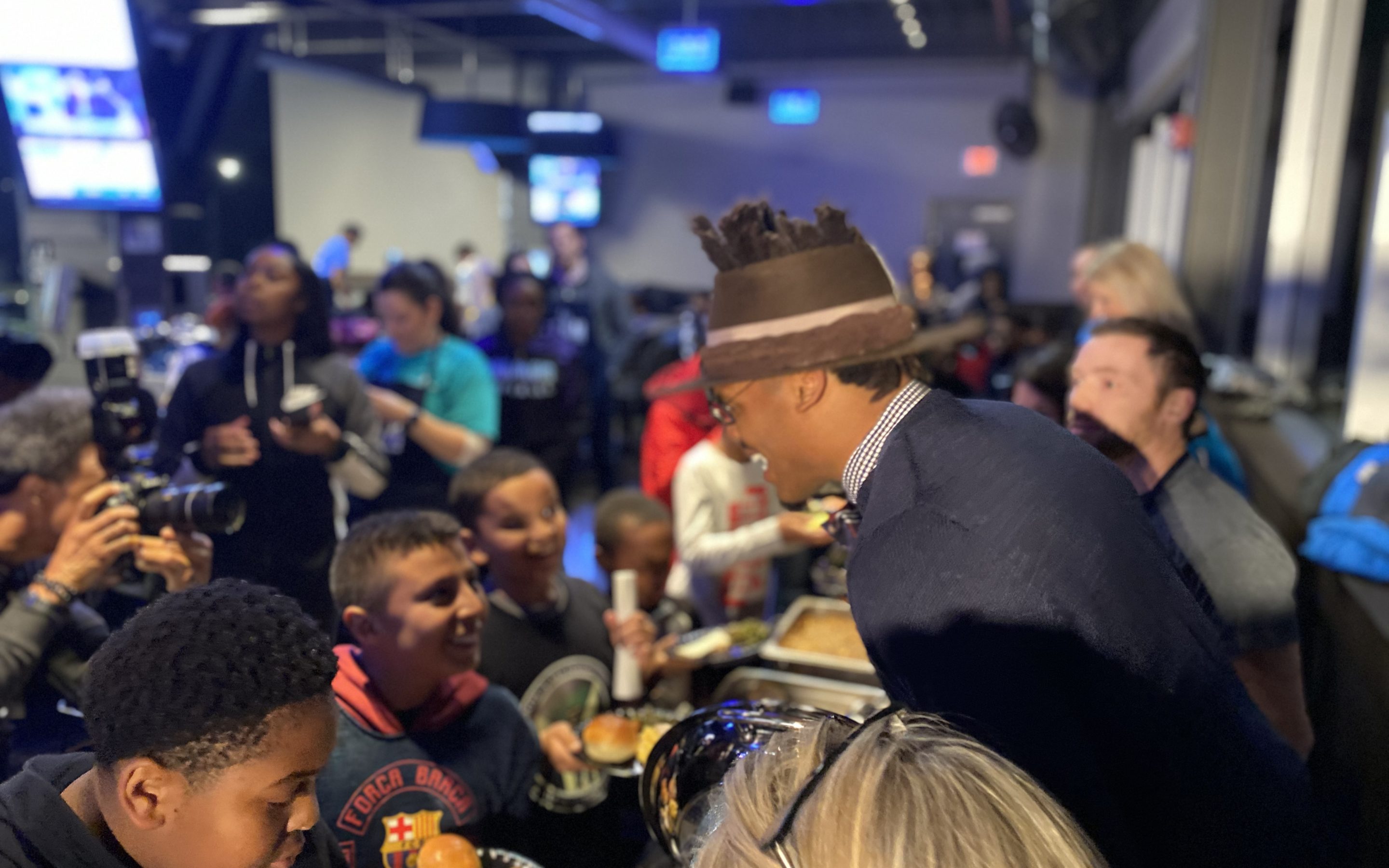 When Cam Newton walked onto the grass at TopGolf and took the microphone in front of over 1,200 screaming kids whom he was about to provide a Thanksgiving meal – the eighth consecutive year he’d thrown the annual event and the first time he’d appeared in front of an adoring crowd since he’d come off the field at Bank of America Stadium after a Week 2 loss – he took a moment to gather himself and soak in the roar.

“I really, really miss you,” said the Panthers quarterback, who was missed more games this season than he had missed in his entire career – his connection with the children of his community has always been strong and the love he receives from his youngest fans has always helped to drive him, whether it’s on the football field or off of it – even as questions and rumors continue to swirl about his future with the team.

“It means a lot,” Newton, who had spent the last hour scooping macaroni and cheese, pouring gravy onto turkey and trying to convince the kids to put some green beans on their plate – as well as taking plenty of selfies. “Being in the position that I am, being away from the game, missing the support and on-field interactions with fans, so when you finally do come out to a showing like this and it’s the first time in about eight or nine weeks, that’s what you missed the most.”

“It’s been a trying year for me in [more] ways than one, but at the end of the day, being around this type of atmosphere helps you and it would help anyone.”

Joined by more than 80 volunteers from co-hosts Chase and Harris Teeter as well as the Cam Newton Foundation, Sir Purr, face painters and balloon artists, Newton also had some additional help from David and Nicole Tepper, who Newton said have shown “unwavering support” in his dedication to the community. Newton said he wants to be one of the pillars of the Charlotte community for many years to come, drawing inspiration from current teammates such as Greg Olsen and Panthers legends like Sam Mills, Thomas Davis and Steve Smith.

Events like the Thanksgiving Jam, which provided not only a traditional Thanksgiving meal for them to eat that evening but a second one to prepare at home that consisted of traditional sides, but a chicken instead of a turkey – last year, the 14-or 15-pound birds proved too heavy for the children to carry home with them at the end of the night – have become a signature of Newton’s time in Charlotte. In a few weeks, he’ll go around town delivering presents as Santa Cam, another tradition he’s created to help the needy.

And the number of kids attending the program continues to grow each year – which Newton pledges it will do for the foreseeable future.

“Each and every year, we can say that it’s been getting better,” said Newton. “We’re looking forward to countless more years in Charlotte to impact the community in ways outside of the game of football – doing things for the greater good is important.”

“Even though I’m born and raised in Atlanta, GA and did my stint in so many different colleges, Charlotte is home. Charlotte is a place that I know, people know me, they’re not just assuming they know what I’m like, they know my energy, they know what I don’t like – for me, to have that type of presence, it just reminds you that it’s right.”

“This is what the holidays are really about – giving back in [more] ways than one. Putting your signature on a community is extremely key.”

Here’s what it’s like to walk about 100 feet if you’re Cam Newton. pic.twitter.com/PwcMKCiJ68

What the Cam Newton Foundation provides for the kids and their family is clear – but what the kids and their families provided for Newton tonight was even more obvious – Newton feels at home surrounded by his people, talking smack with fans and interacting with the crowd and it was clear that the past few months, facing the first long-term injury of not only his career, but his life, have been hard on the 30-year old quarterback.

“I don’t want to sound like I was on suicide alert, [but] I was in a place where I wasn’t used to being,” said Newton. “Just interacting with fans, that’s the part that you miss the most going through the rehabilitation process.”

“At the same time, you know you’re affecting lives and doing it for a great cause.”