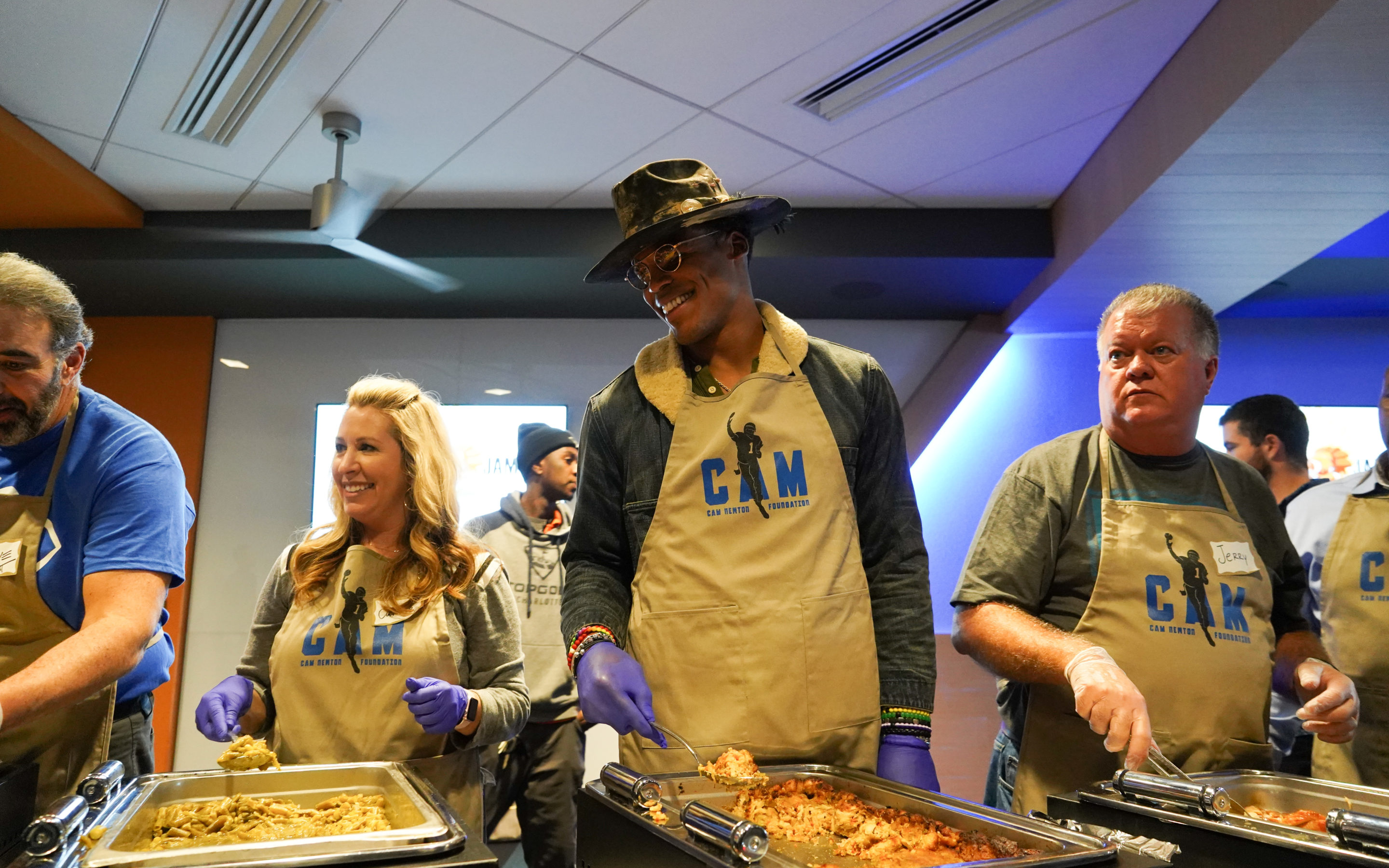 Cam Newton was not in a good mood on Monday after a heartbreaking 20-19 loss in Detroit that saw the franchise quarterback miss an open Jarius Wright on the two-point conversion that would have put the Panthers ahead with just over a minute to go.

It didn’t take long for Newton’s mood to turn around Monday night as his namesake charitable foundation hosted “Cam’s Thanksgiving Jam” for the seventh year in a row at TopGolf Charlotte; Newton, members of his family and 80 volunteers served traditional Thanksgiving meals to over 1,200 underprivileged kids and some of their family members. This year’s event was the largest ever, with over 400 more guests than past “Thanksgiving Jams” – but Newton says they’re not doing enough and he wants to do even more.

“We wanted to help as many people as possible, but just think – we feed upwards of 1,200 kids and families today and there are still people that are still hungry. So you still can’t do enough,” said Newton, who indicated that the goal for next year would be to help 2,000 children. “I feel like I’m in a position where so many people look at me and what I do and I just want to be able to give back as much as possible so the next person that’s in my position, they’ll do the same.”

The event featured plenty of entertainment for the kids who came from YMCAs, YWCAs, Boys & Girls Clubs and various low-income after-school programs, thanks to the Second Harvest Food Bank of Metrolina’s Kids Cafe Program that partners the food bank with existing non-profit agencies that serve at-risk children. The kids got to enjoy three floors of face painting, music provided by DJ Vinny, Sir Purr and Harry the Happy Dragon, the mascot for Harris Teeter; Topgolf was alight not only with the screams of delight as the elementary and middle-school age children tried their hand at swinging a golf club, but with some friendly smack talk from the kids to their favorite quarterback as he served macaroni and cheese, dressing and even donut holes from behind the buffet line.

What were the kids telling him?

“I’ve heard a lot of touchdown celebrations,” Newton said before pausing and flashing that 10,000 watt smile as he recalled the kids referencing the failed two-point conversion from Sunday’s game in which it looked as if Newton had a lane to the end zone. “Why didn’t I run?”

“It’s all in good fun and I wouldn’t want it any other way.”

Newton joked that his bad mood had already evaporated by the end of the evening and that giving back at an event like this – this was Newton’s second charity event in as many Mondays – puts the 29-year old in the holiday spirit. He’s even ready to start playing the Christmas Pandora station; perhaps we’ll be hearing some ‘Jingle Bell Rock’ at practice this week.

As the kids exited the evening’s festivities, they were each given an additional gift – a second meal, including a full turkey, for their families to cook at home.

Call it the extra point.