Can Rashawn Slater Be The Panthers’ Answer At LT? 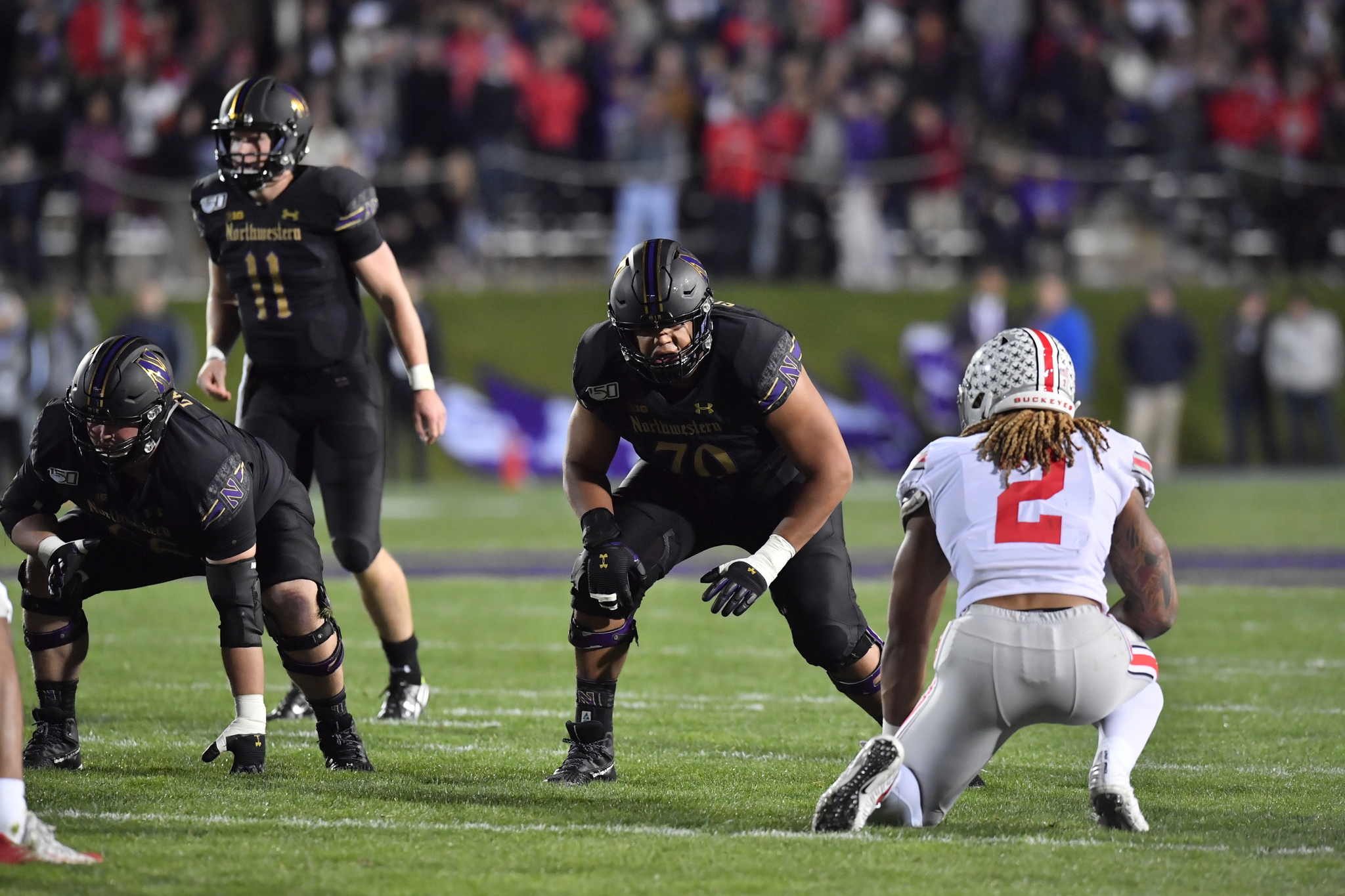 The Panthers have made no secret of wanting to add a tackle in the draft, and with Taylor Moton yet to sign a long-term deal and little clarity about Greg Little’s future with the team this really shouldn’t come as a surprise. In terms of addressing this need, one player that the Panthers have been linked with in the first round is Northwestern’s Rashawn Slater, who has risen from being a day two selection to a possible top-ten pick.

Slater might not fit the prototypical size for NFL offensive tackles, and at 6-4 and 303 lbs there are some teams that might see him as more of a guard, but with 33″ arms he certainly has the length to stay at tackle and has a chance to follow in the footsteps of players like Isaiah Wynn who have played well at tackle despite being viewed as guard by some.

So, with that said, what does Slater show on tape and would he be a good fit with what the Panthers are looking for in an offensive lineman? 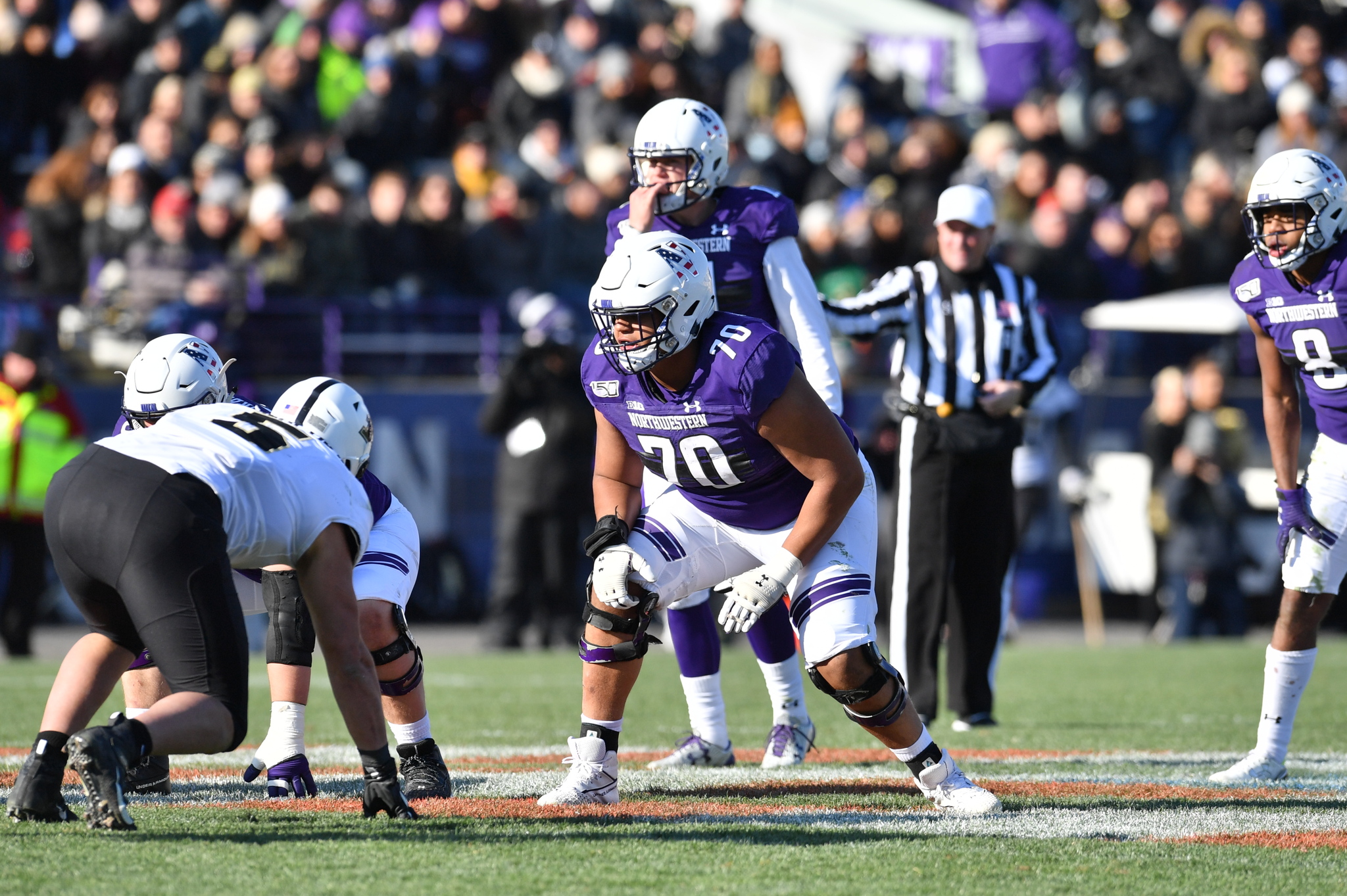 With any player who is potentially going to be asked to play left tackle in the NFL the evaluation always has to start with pass protection. While Slater doesn’t have the foot speed of some of the elite tackles in football, he is more than capable of covering around the edge against most rushers (Slater played LT wearing #70):

However, there are likely going to be times where he simply gets beaten for speed by rushers:

And even when he is able to counter that speed, it ultimately comes by sacrificing other elements of his technique:

This is really the big question around Slater, and while we will get on to lots of things that he does well and which should allow him to be a high-quality player at the NFL level, it is worth spending a moment to look at what is ultimately going to set his ceiling. 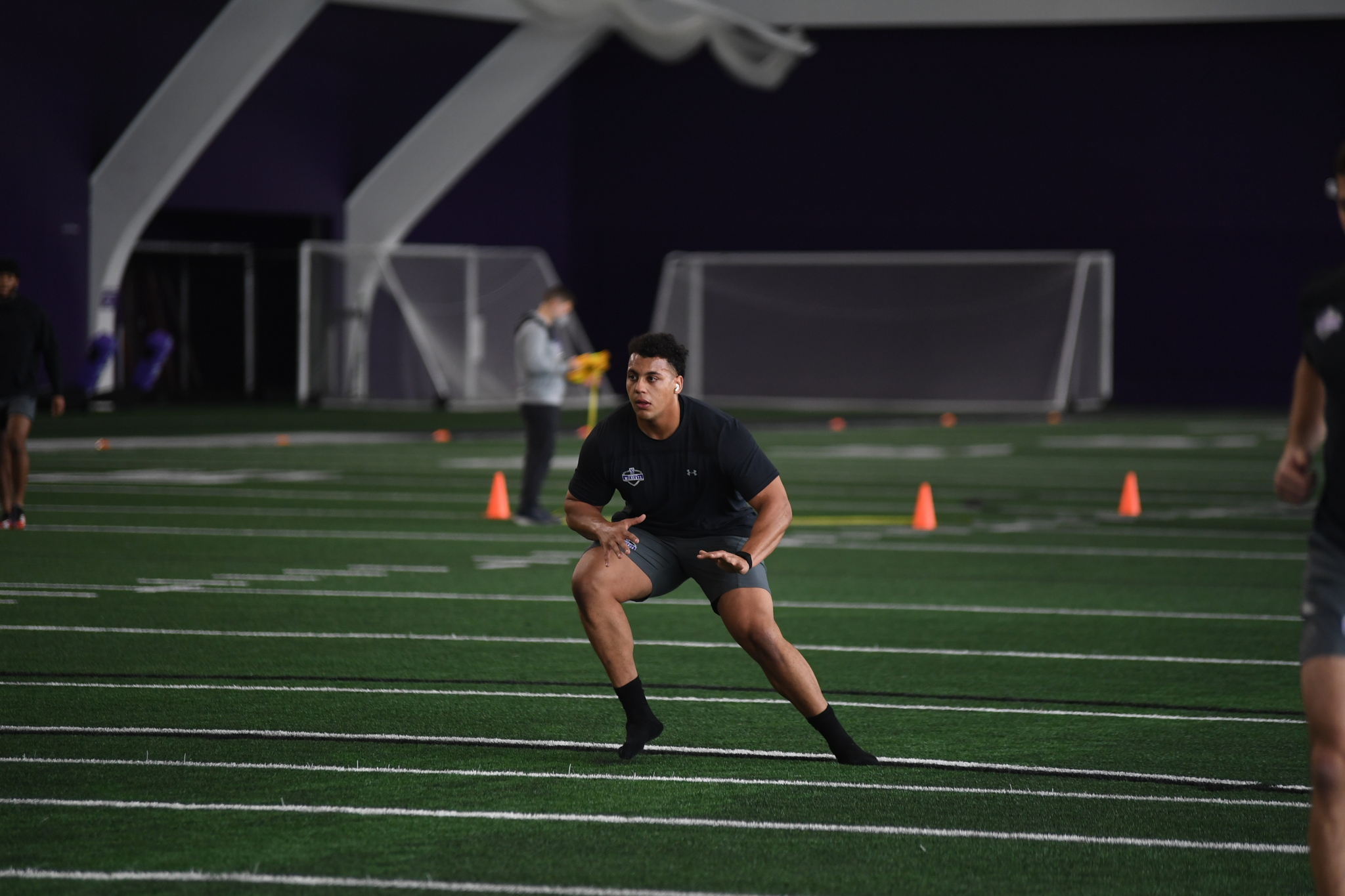 When faced with rushers who have the potential to beat him for speed around the edge, he tends to sacrifice his technique in two ways. Both of these ultimately result from his need to cover more ground, which leads him to straighten his legs to allow him to take longer strides. By doing this, he raises his center-of-mass and increases his backwards momentum, leading to weight loading onto his back leg:

This makes it very hard for him to then drive off this back leg, and combined with his high center-of-mass this can create a vulnerability to rushers who are able to work speed-to-power:

And can also create issues countering inside moves:

As well as issues sustaining blocks when defenders look to work back inside:

The other issue this creates is that it can lead to him playing with a narrower base, and this causes him real problems especially when rushers are able to stop and then re-accelerate:

Ultimately, every prospect has a limit when it comes to foot speed, it’s just a matter of where that limit lies. Slater will probably be towards the middle of the pack by NFL starting standards, which means this is unlikely to be a notable strength of his game or some fundamental weakness. Importantly, this is something teams can coach around to some degree, as outside chips would allow him to play with more security. While this isn’t ideal, it shouldn’t prevent him from playing tackle to a high level in the NFL. 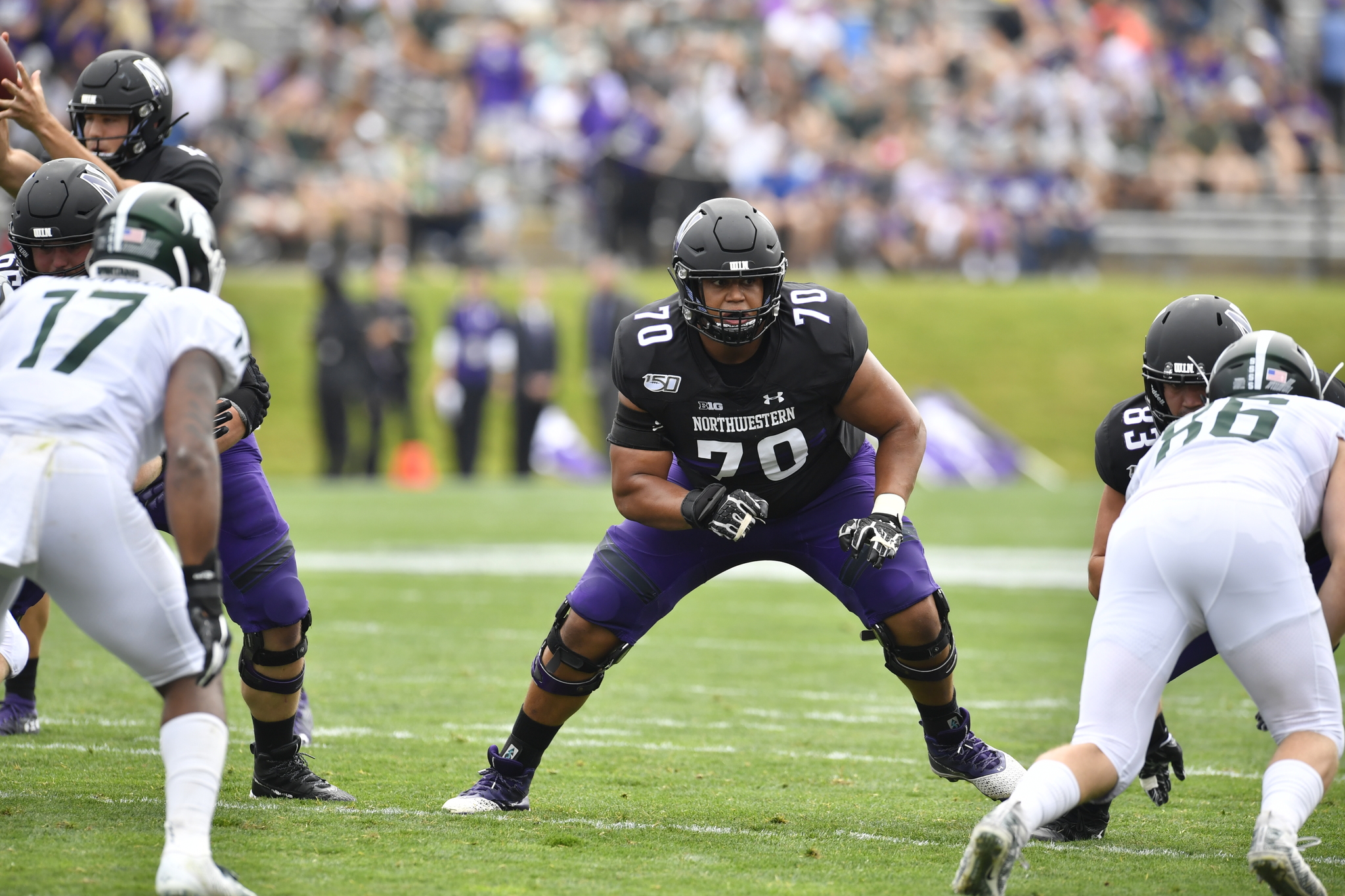 Where Slater is able to make up for some of his foot speed limitations in pass protection is with his hand usage, as while his arms can get a little wide when his pad level rises:

He shows consistently very good hand placement with good arm extension, allowing him to control defenders even when his footwork isn’t winning him reps:

He also shows good discipline when it comes to dealing with stunts and wrapping defenders, keeping tight to the guard and forcing defenders to cross around his face:

Slater is going to lose reps in pass protection at the NFL level, but he is going to win an awful lot as well, and while he doesn’t have the absolute ceiling in terms of foot speed, he is the most technically sound pass protector in this class and should be able to be a high-quality pass protector early on. In obvious passing situations against better speed rushers, he would benefit from help outside early in snaps, but this shouldn’t be a big enough negative for him to have to move inside at the next level. 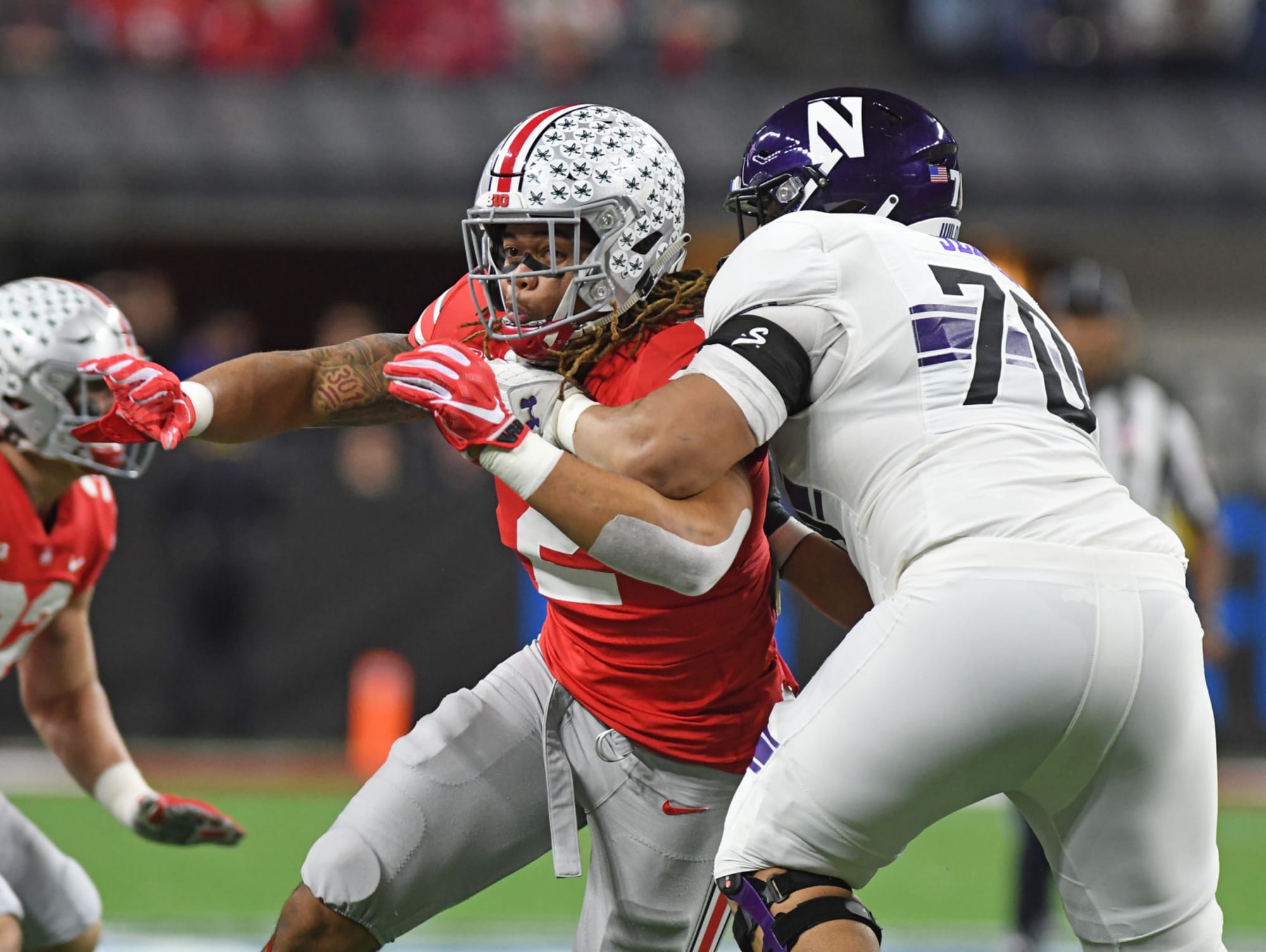 As a run blocker, while Slater isn’t an earthmover, he has enough power to generate push up front and be effective when asked to move defenders off a spot:

And as in the passing game, he shows consistent hand placement getting inside the frame of defenders and allowing him to control blocks effectively:

With flashes of really good arm extension to keep defenders away from his frame and prevent them from being able to work off effectively:

And in terms of footwork, he uses his feet well to create rushing lanes laterally by sealing off gaps inside:

This looks to be especially valuable in the Panthers’ offense which under Pat Meyer seems to focus more on creating gaps with directional blocks and scheme rather than asking the offensive line to move the line of scrimmage by putting a hat on a hat. Slater’s combination of foot speed and disciplined footwork should allow him to excel in such a scheme. 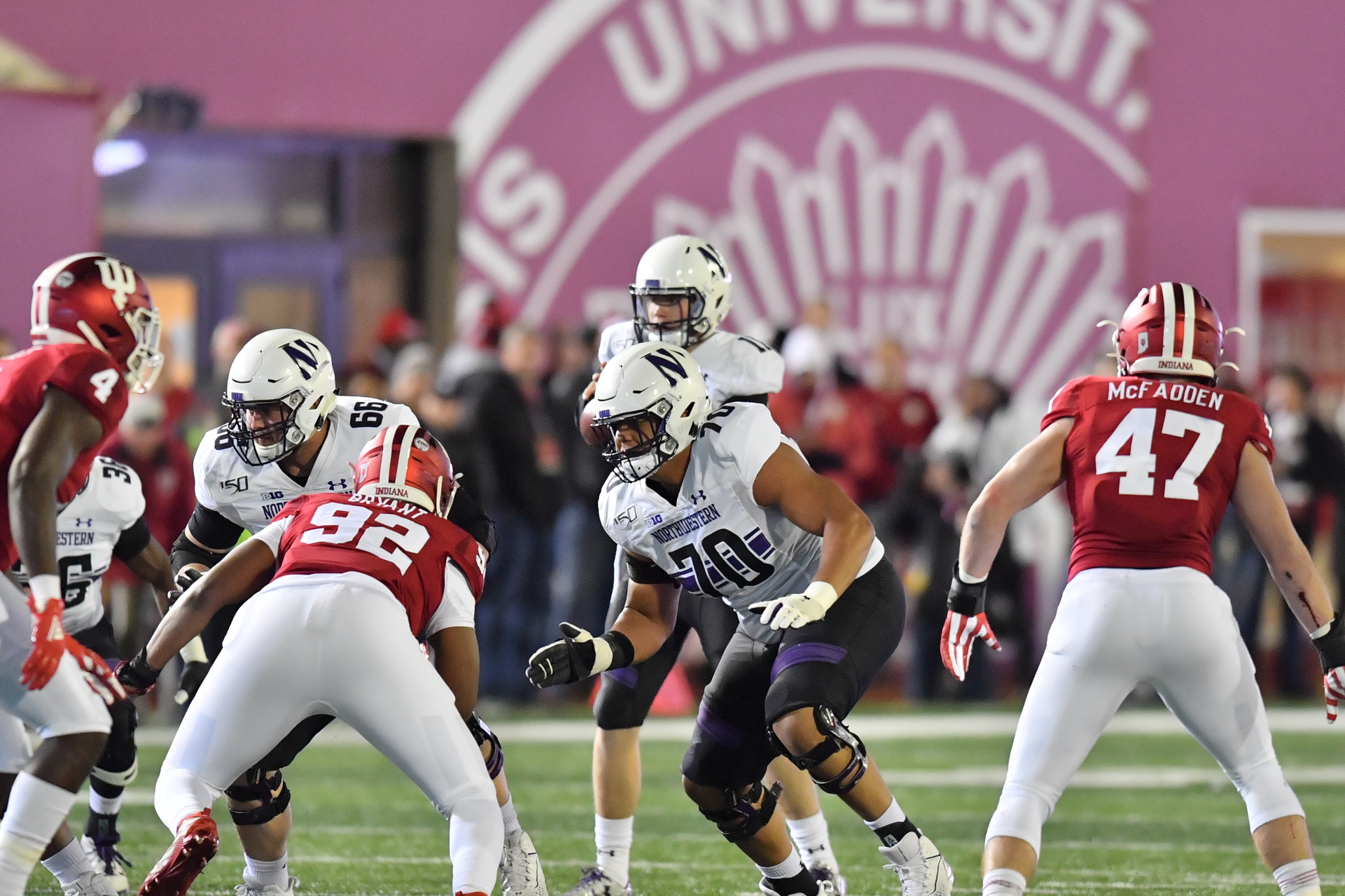 However, as in the passing game he could stand to improve in terms of his knee bend and here this is more a matter of discipline and less of physical limitation. This manifests both in terms of limiting the power he is able to generate at times:

It also leads to his weight getting very high which creates issues with control and makes it too easy for defenders to work him off-balance:

It also leads to him narrowing his base at times, which makes it hard for him to control blocks as this allows defenders to work off laterally and can lead to holding calls:

This should be helped by playing in a scheme which doesn’t ask him to have to drive defenders off the ball, as often this narrowing comes as an attempt to generate power despite a poor pad level, but ultimately a continued focus on improving his knee bend would be the best path to consistent success. It’s also worth noting that, while his arm extension is generally good, this is made more difficult by his occasionally poor pad level and an improvement in the latter should help the consistency of the former:

In a scheme that asks him to consistently drive blockers off the ball then his is unlikely to be anything more than decent as a run blocker, especially if he is not able to make continued improvement with regards to his pad level, but in a scheme like that which the Panthers are expected to run, his ability to control blocks with good hand usage and creating rushing lanes with footwork should allow him to be a high-quality run blocker. 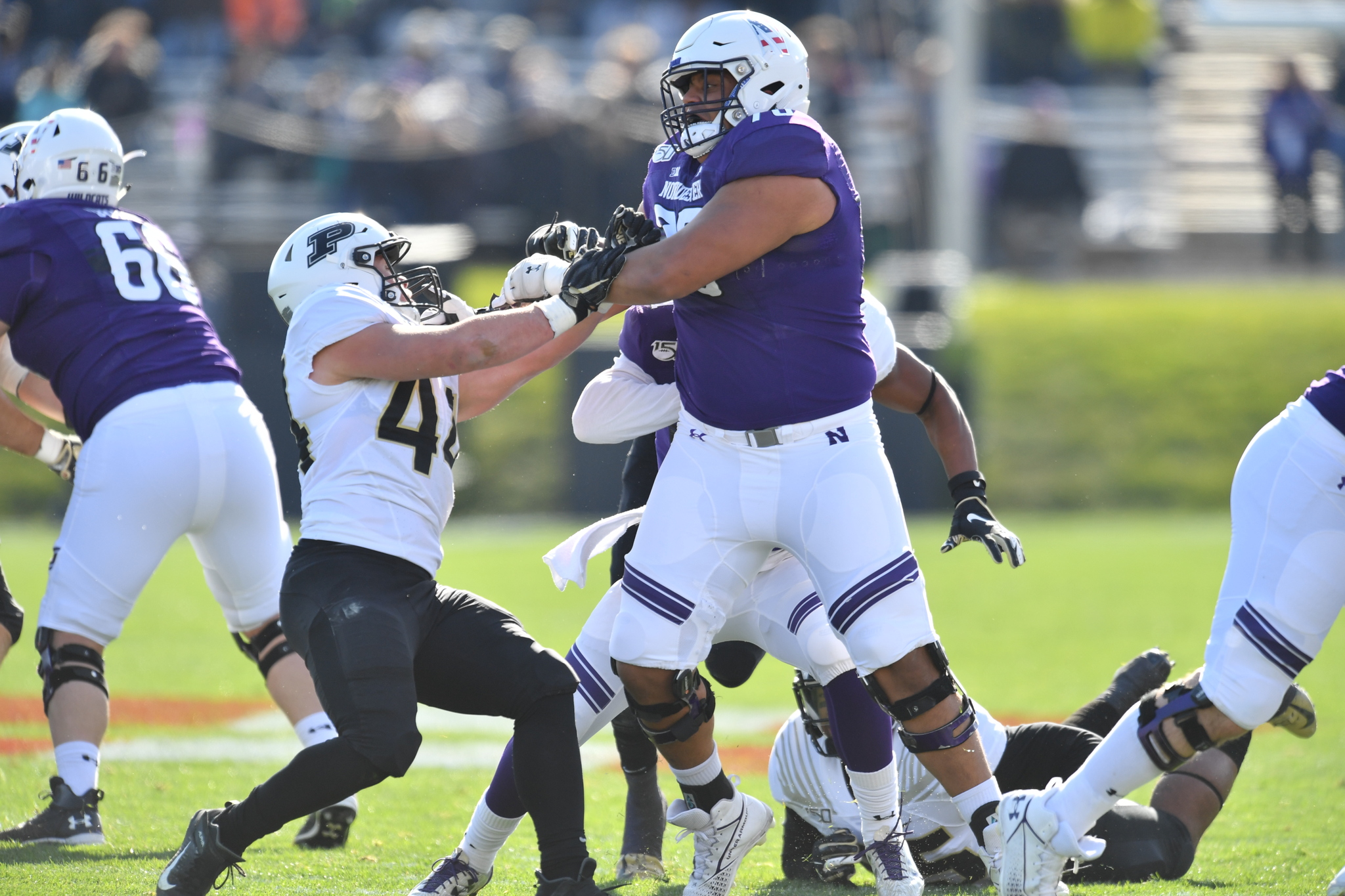 He also shows some impressive subtleties in this regard, working off of double teams effectively to push gaps wide before kicking up to secure blocks on the second level:

And has the movement skills to get out in space to make blocks against defensive backs:

Slater’s value as run blocker will therefore depend quite a lot on scheme and, while improving his pad level should help him wherever he ends up, for a team like the Panthers which prioritizes directional blocking, quickness and control he can be a significant positive addition to the rushing attack. 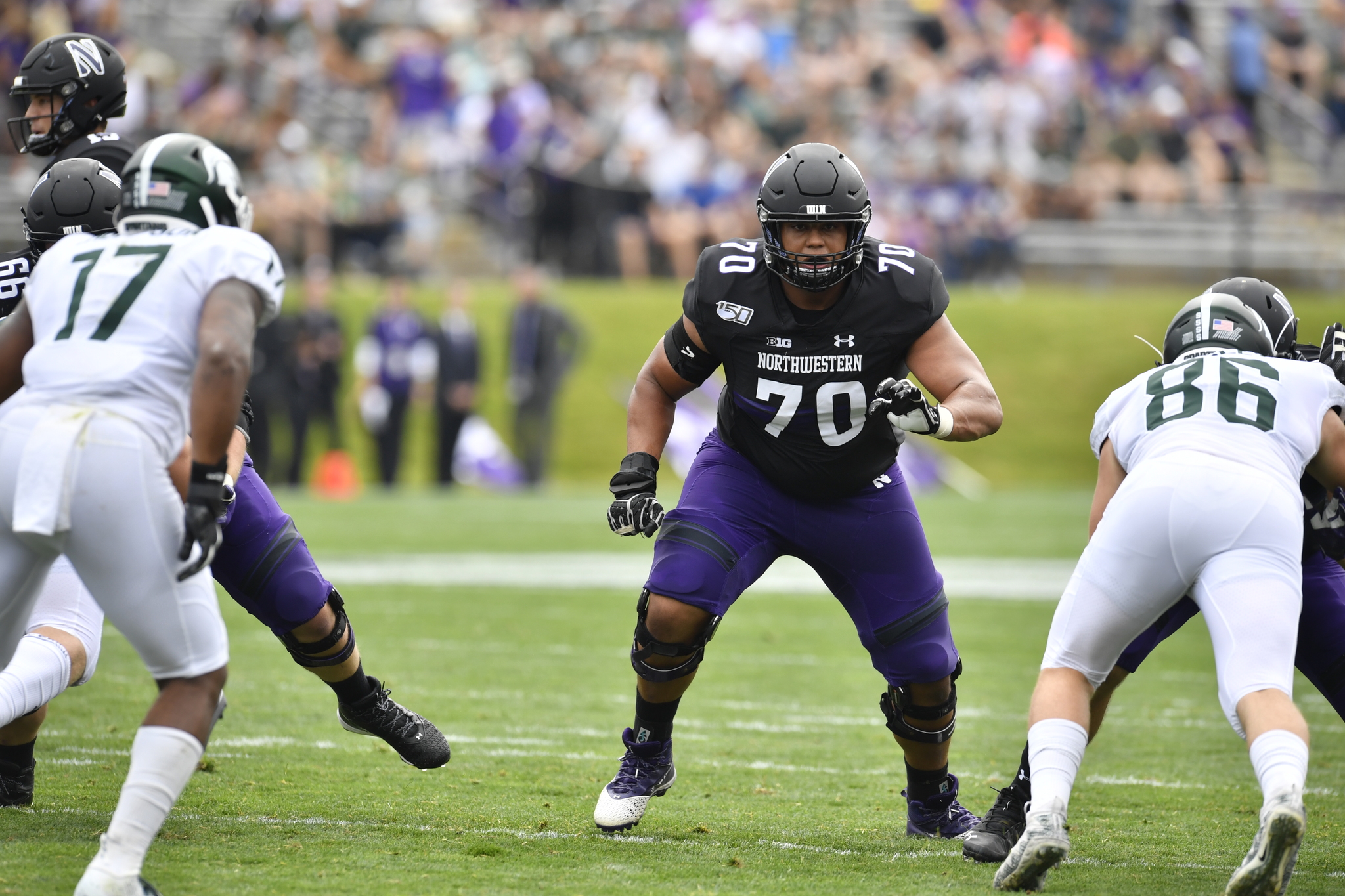 Overall, Slater’s pad level has room for further improvement, and he can struggle for foot speed at times as a pass protector, but he uses his upper body extremely well on a consistent basis to secure blocks and prevent defenders being able to win early even when they are able to out-athlete him.

For the Panthers, Slater is likely their best chance of finding a week one starter at left tackle who can offer an upgrade over what they have on the roster. Even if he doesn’t have the absolute ceiling of the likes of Penei Sewell and Christian Darrisaw, he has the potential to be a high-quality starter at tackle with the option of moving inside should teams need him to. He might not be the flashiest prospect in the draft, but given the Panthers need for security on the offensive line it is hard to imagine he won’t be part of the conversation with the 8th pick.