As you drive along Morehead Street in Uptown Charlotte, the sounds are as much of an indicator of the changing seasons as the sights. In the late winter and early springtime, the silence of this area marks the absence of football from the city’s fabric and daily life and, as Memorial Day approaches, the sounds of whistles, sirens, and cleats on the ground is a clear audial indicator that the Carolina Panthers are coming out to play again.

Tuesday marked the first open session of Panthers Organized Team Activities for 2022, offering a first look at the team and roster after its re-shaping through the NFL Draft and free agency. While rookie minicamp offered a first look at the team’s incoming class of Draft picks and undrafted free agents, OTAs bring the core of the roster back into the fold as returning veterans take to the practice field once more.

So what of note happened on the practice fields Tuesday?

The most notable sights on Tuesday were the return to the practice fields of two of the team’s core players as running back Christian McCaffrey and cornerback Jaycee Horn, both of whom had injury-derailed 2021 seasons, were back out there without any limitations or lingering reminders of their ailments from a season ago.

Jaycee Horn is out here and doesn’t look limited physically. Was outstanding before a foot injury ended his rookie season after just three games. pic.twitter.com/i4dq2bEX5q

The return of Horn to full health was an especially welcome sight as the 8th-overall pick in the 2021 Draft was outstanding in the first two games of his rookie season before succumbing to a broken foot in Week 3. That sudden and early ending – and the personal anguish that Horn felt knowing he could neither help the team nor achieve his rookie year goals – has the second-generation NFL star eager to be back on the field.

“Even though I couldn’t control it, me being hurt, it still ate at me bad. All I can do is keep stacking the days and wait ‘till Game One.” 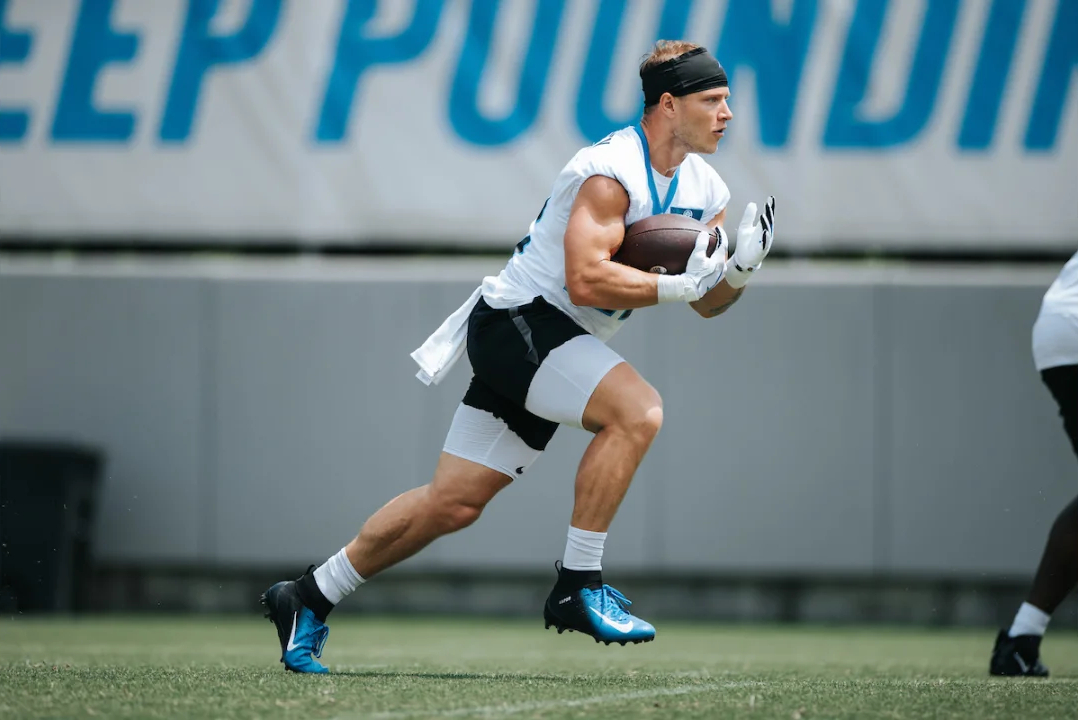 McCaffrey, meanwhile, looked very much like his vintage self. He moved quickly and fluidly, and he made several catches at various depths look as natural as can be. From a skills standpoint, that’s hardly notable as there is after all no doubt about McCaffrey’s talent but, after two-straight years of nagging injuries have clipped his wings after he soared to NFL MVP-caliber levels of play in his first three seasons, it was just good to see him out on the field without hindrance.

Christian McCaffrey catches a pass as the running backs get their work in. pic.twitter.com/M72uFWTK3p

This spring, the Panthers’ coaching staff has begun to formulate what they can do in order to keep McCaffrey fresher and healthier. Speaking to the media, head coach Matt Rhule spoke of different approaches to McCaffrey’s workload in practice moving forward, as well as holding him out of future preseason games.

Importantly, McCaffrey – never one to leave the field of his own accord – sounds on-board with the plan.

“Any time there’s a way to make it so you can be a little fresher on game day, I’m always for it,” McCaffrey said. “We have such a good staff, and obviously Coach Rhule’s on top of it just coming out with a good plan that we know. And plans always change, but just (the) open door of communication has been great. Don’t want to overthink it, but it’s just been nice looking at the different avenues to just make sure I’m ready to roll for each game.

“… I think the good part about OTAs is you get to flirt with a lot of those things and really figure out. That’s why I said the communication is from me to them – ‘Hey, how’d you feel today?’ I just respect a lot the fact that they’re willing to have open communication with me on that and the trust in that of knowing that I’m gonna give them an honest answer. We’ll go from there, but right now I think we’re just having fun with it, playing with different warmups and different things here and there. That’s the beauty of this time right now.” 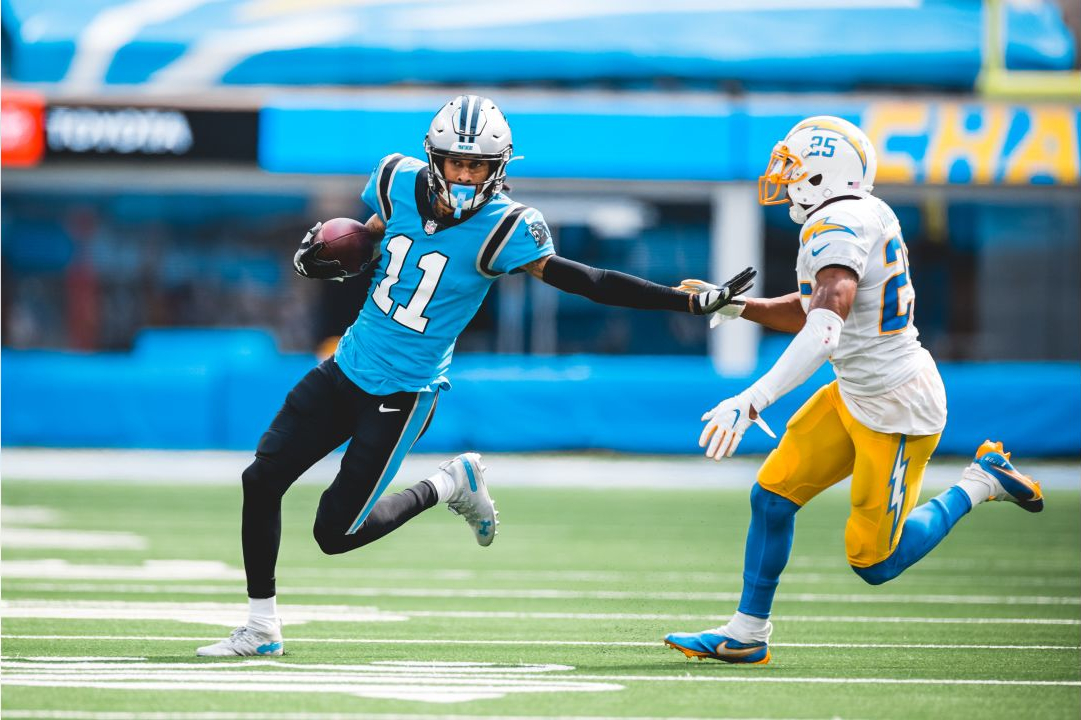 By and large, most players on the Panthers participating in OTAs were at full health though cornerback C.J. Henderson and defensive tackle Daviyon Nixon were spotted in green jerseys, as were a pair of running backs in veteran D’Onta Foreman and undrafted rookie John Lovett. Defensive end Marquis Haynes, meanwhile, is recovering from surgery on a ligament in his hand.

New number for CJ Henderson and it’s a big one. He got #24 which is *the* cornerback number in Carolina.

To much given, much expected. pic.twitter.com/ist8bdSrBD

Additionally, a select few veterans were absent from practice, including wide receiver Robbie Anderson. While Anderson’s absence was not due to an explicit cause – Safety Xavier Woods and offensive tackle Cameron Erving were both attending to the births of their children – Rhule did not express any level of concern.

“This is voluntary – I actually believe in it being voluntary, I think it’s great,” Rhule said. “At the end of the day, guys that are here are here. One thing about Robby, you know Robby’s gonna be in the best shape of his life. He was here for awhile. Not a concern for me.

“… Xavier and his wife had a baby, Cam Erving and his wife just had a baby, so we’re very happy for those guys. It’s kind of hard when you’re moving into town and your wife’s there. Xavier’s a smart football player, played a ton of football, so he’s taking care of what’s important right now.” 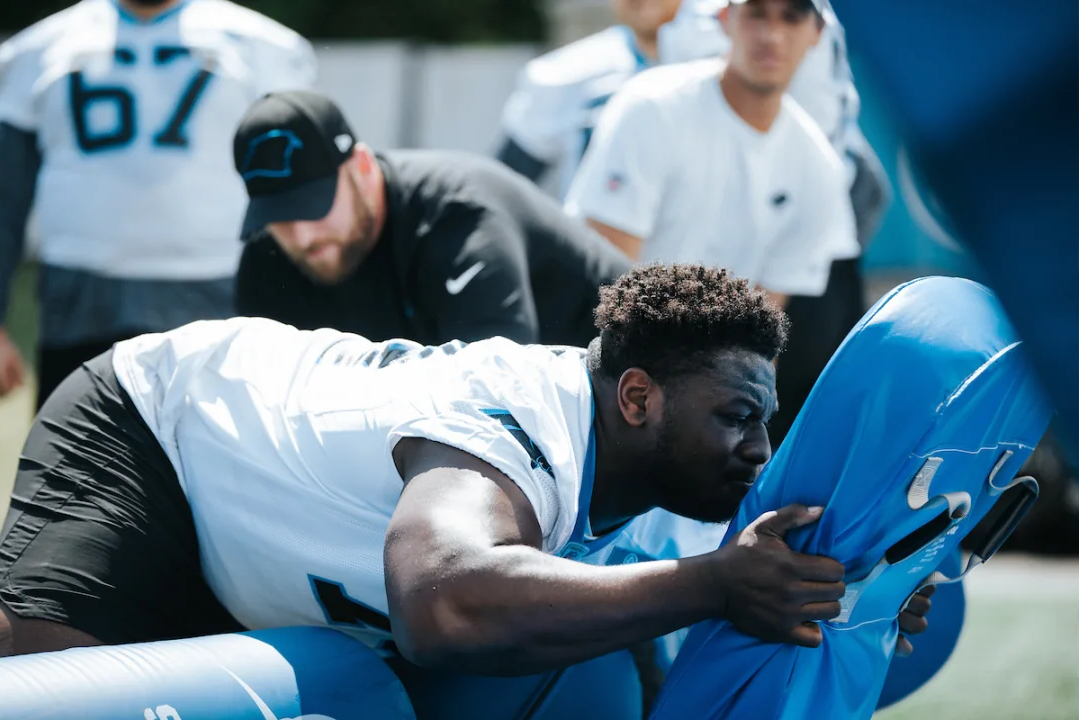 Following rookie minicamp, Tuesday’s practices saw Carolina’s newest crop of rookie players enter the fray alongside the team’s existing players. Most notable of these, of course, was new left tackle and 6th-overall pick Ikem Ekwonu. Though Ekwonu comes to the Panthers with hopes of him being a transformative presence for their offensive line, OTAs on Tuesday showed that Ekwonu still has a lot to learn when he committed a false start during team periods.

Needless to say, however, there is still a long way to go between now and the start of the season.

From the vantage point offered to media, there were two undrafted players who flashed on Tuesday: Linebacker Arron Mosby flashed by breaking up a Sam Darnold pass intended for D.J. Moore during red zone work while wide receiver Derek Wright’s No. 83 jersey was a constant presence, as he caught several passes and showcased a work ethic that has already earned him a nickname in the building.

“His name’s Apropo – He does everything right,” Rhule said. “He gets lined up correctly, he gets open, he catches the football, he’s fast. He’s a guy we signed as an undrafted free agent, brought him into rookie minicamp, to be honest with you, without knowing very much about him. And right away, you start to pay attention to him.

“When you’re a rookie, especially at the wideout position and there’s 7,000 formations and a bunch of different playcalls and all those things, it’s really the guys who will spend the time in their off-time to work who are pros. … A guy like Wright has figured it out. ‘Hey, if I want to do what I want to do in this league, I need to emulate the guys that are where I want to be.’ He studies, he knows what he’s doing. He’s quick, he’s explosive, he has good hands. We’ll have to wait and see what he does.” 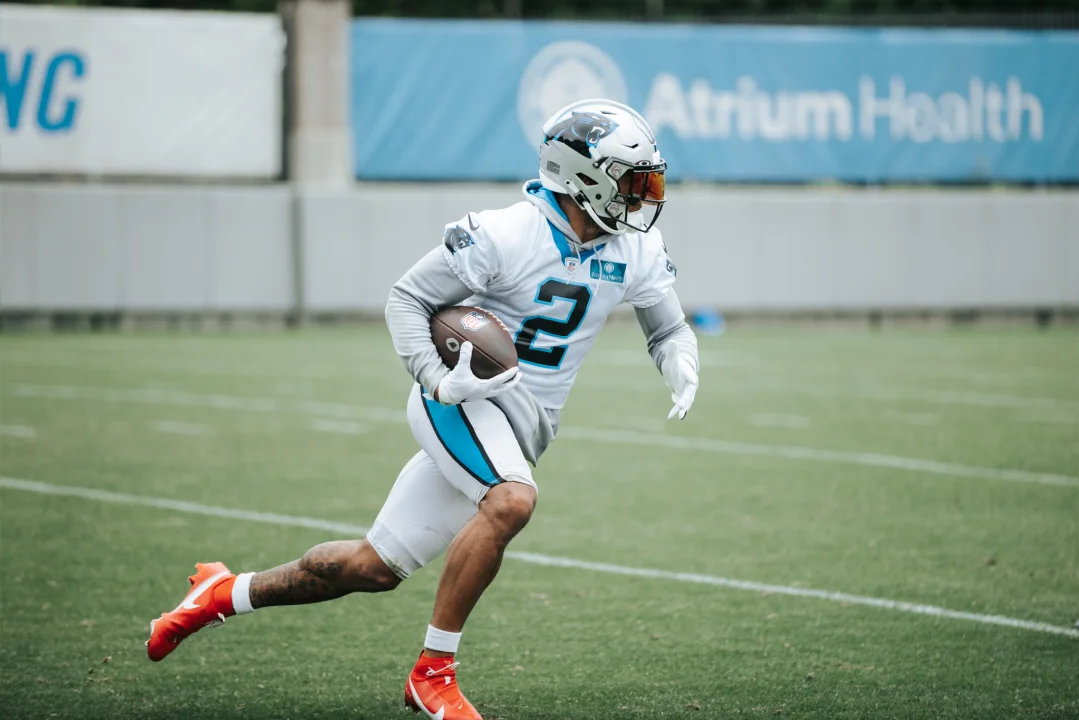 Play-wise and performance-wise, there’s little that can be gleaned from OTA practices that can be used to project into the regular season. However, Tuesday’s practices were surprisingly intense for non-contact sessions, with players diving about and going to the ground on multiple occasions. The closest call came when wide receiver D.J. Moore dove for an off-target pass from Sam Darnold on the left side of the field and came together with defensive back Myles Hartsfield. It took a moment for Moore to get up, but he appeared none the worse for wear and was back on the field shortly afterwards.

Entering his second year as Panthers quarterback, Darnold delivered a few nice balls on Tuesday as he works with the Panthers’ coaching staff to alter his mechanics: One of Darnold’s major weaknesses has been that his footwork becomes sloppy under pressure – In Darnold’s words, “loose and chaotic” – and the Panthers have made a point to develop Darnold technically under new offensive coordinator Ben McAdoo. 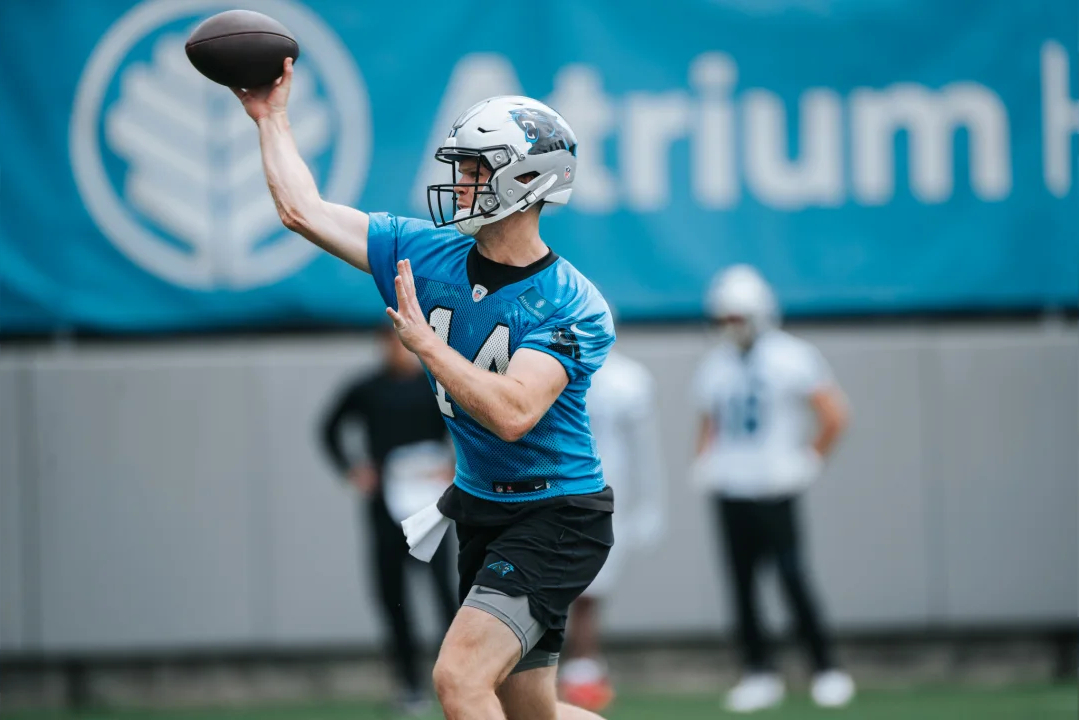 As may have been expected, Darnold was a major topic of conversation throughout the offseason. One year ago, his being jettisoned from the New York Jets to Carolina was billed as a fresh start for Darnold, where he could develop away from the heavy scrutiny and demanding nature of the New York market in a more “easygoing” place like Charlotte.

That narrative fell to pieces by year’s end, as Darnold became a national punchline and a walking target of ire for angry Panthers fans. For Darnold, part of the lesson of 2021 was learning how much the pressure to win is felt everywhere, even beyond the spotlight of USC in college and New York in the pros.

Many framed Sam Darnold going to Carolina as him getting away from the intense pressure and scrutiny of New York. But in Charlotte, it hasn’t let up at all.

What Darnold has learned about the pressure and expectations to win that exist in the Carolinas: pic.twitter.com/ALIpbYIMYY

“This town loves winning. And when you don’t win, it’s tough. It’s not only tough for us in there, but it’s tough for the fans and we get that,” Darnold said. “… It’s an interesting point just talking about that, with social media and different things. New York media, L.A. media, those are usually bigger media platforms. But now with social media, cameras everywhere, everyone sees everything. It’s a media market everywhere.”

“It’s fun though. I love playing ball in the Carolinas, and I love these fans.”

Tuesday marked the second of three OTA sessions this week, with the third coming this Thursday. After that, there will be three more sessions following Memorial Day, with the June 1 session being open to the media.