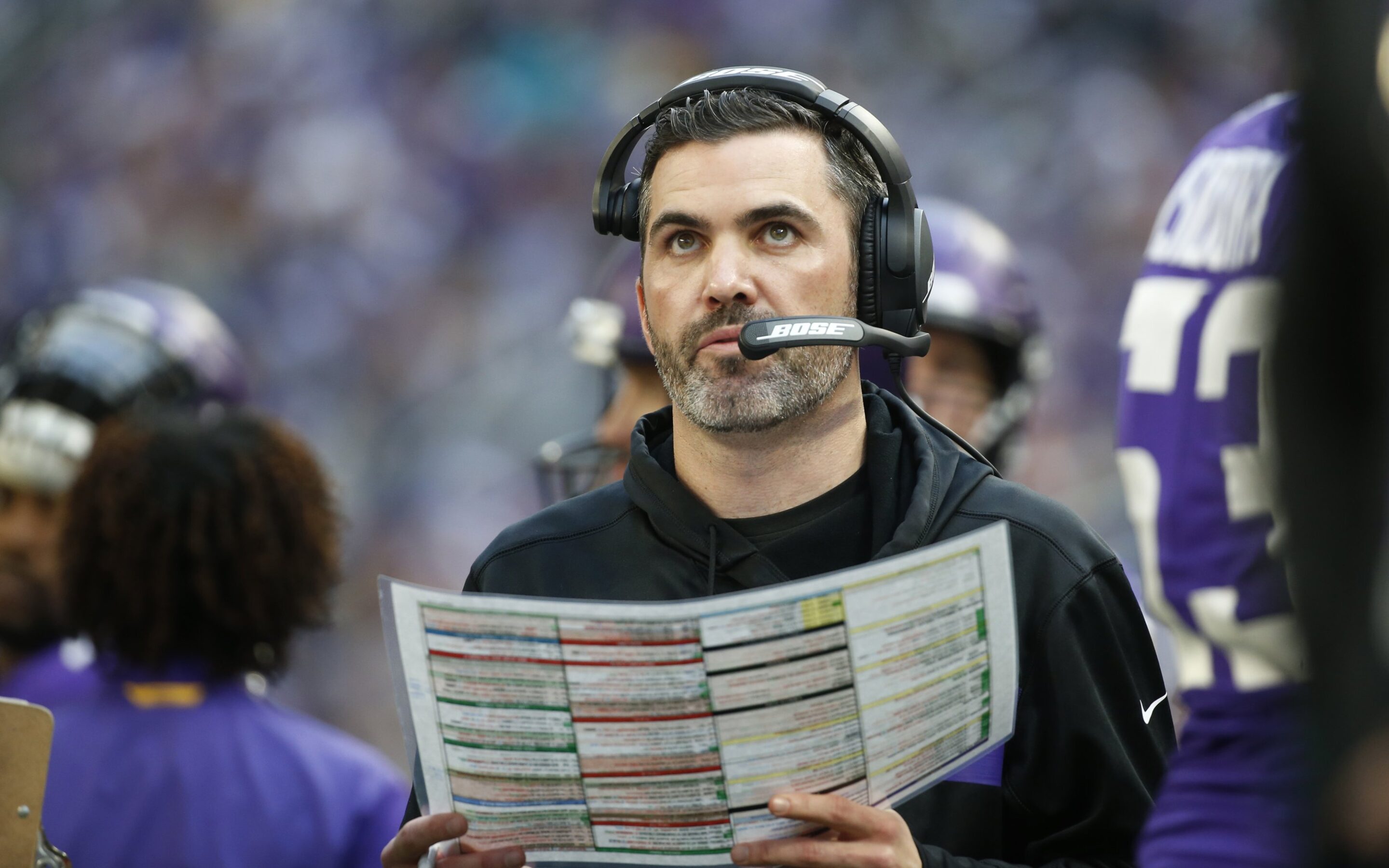 The Sprinkles And The Cherry

One of the oldest strategies in football is to use the run to create opportunities to throw the ball through play-action – this is something the Vikings have done a lot of under Stefanski. In particular, the outside zone allows them to run a lot of rollouts on the back side of the play, such as the following:

Here, the offensive line are all blocking down like for an outside zone, with the backside tight end sealing off the space for the quarterback while the slot receiver forces the safety deep to create space underneath and the backside outside receiver runs a nice out-breaking short route to force the backside corner to cover the flat. The key to plays like this is not overusing them, as schematically, they don’t present a huge challenge for the defense – but by mixing them in with the outside zone and harder play-action, the Vikings have managed to have a high level of success.

The Vikings also look to work in some more conventional play-action dropbacks, and often these include at least the option of taking a shot deep in order to generate chunk plays in the passing game. While this play ultimately led to a lost fumble, it is a great example of the Vikings’ ability to generate big plays off of the run:

As with the rollout above, the Vikings are very reliant on just three routes with only one deep route:

The play-action works to draw down the deep safety leaving the receiver one-on-one on the outside against the corner with no help inside on the post. The jet motion pre-snap pulls the defense laterally while giving the quarterback a checkdown to the left with the fullback kicking out to the right flat. Again, there is nothing here from a scheme point of view that defenses are incapable of dealing with, but by varying the run, pass and play-action and throwing in a load of motion to keep the defense off-balance, Stefanski has shown the ability to keep the ball moving downfield.

There are, of course, pros and cons to this approach, as by keeping things simple in this way Stefanski is able to provide simple easy reads for his quarterback, and when you have an offense with the talent the Vikings have, this is a recipe for success – but there are also limitations. This is essentially just a variation of a lot of the same concepts the Panthers have been running for the past two seasons – while that has looked great at times, it has also led to significant inconsistencies, especially when the offensive line isn’t able to dominate. Stefanski’s scheme is one that, at it’s best, can blow defenses out of the water, but they have also been held below 25 points five times this season, and below 20 three times. Of course, all teams have a bad day, but a team needs to be able to be successful even when plan A doesn’t work.

While the Vikings under Stefanski have largely aimed to keep ahead of the chains and avoid long third downs, nothing works all the time, and Stefanski would likely have a number of such situations early on were he to be hired as the Panthers’ new coach. While it is hard to make strong statements on how Stefanski might be able to fair in such situations based on a comparatively limited sample size, when forced to throw on long third downs this season, it’s hard to see a huge amount on tape which is much different from a lot of what has been run in Carolina the past two seasons, such as the following play:

There are actually a lot of things to like here, even if the pass ultimately goes incomplete:

On the near side of the field, the running back drops off short as a checkdown; something the Panthers do a lot of as well, with the outside receiver looking to attack the middle of the field against zone coverages. The far side of the field is designed to attack man, with the slot receiver going vertical to force the safety deep with the combination of outside receiver and tight end routes creating a natural pick which should help to get the in-breaking route open over the middle. Here, the Chiefs play the pick really well initially and Cousins looked to try and force the ball deep, leading to the incompletion, but this is a play which looks to attack multiple areas of the field and offers options to the quarterback against both man and zone.

In terms of how Stefanski’s scheme would fit with the player group already in Carolina, because a lot of what he runs is largely similar, it would likely continue to play to the same strengths and also cause issues where the Panthers have already been shown to be weak.

This scheme would put a lot of pressure on the offensive line to play to a consistently high level in order for the scheme to be able to be effective on a week-to-week basis; it would also put quite a lot on the shoulders of the quarterback, though not unmanageably so. Similarly, players like DJ Moore and Christian McCaffrey who have thrived in a scheme that has put a real emphasis on gaining yards after the catch would likely continue to do so – this is a scheme that is great at making good players look even better, but also requires a high level of play from all areas of the offense in order to function effectively; if the Panthers do undergo a period of rebuilding, there is a chance that the offensive side of the ball could be pretty ugly at points, especially early on.

A lot of what Stefanski has done is very much in line with what the likes of Norv Turner and Rob Chudzinski have run in Carolina over the past decade, and having been an offensive coordinator for only a little over a year and only with a Vikings team that is stuffed with talent at the skill positions, it is quite hard to show whether he has the ability to run a scheme which elevates mediocre talent rather than simply allowing elite talent to thrive.

The other thing the Panthers will have to consider is whether they are better off keeping one of Scott or Norv Turner as the offensive coordinator and hiring a head coach who has a different offensive philosophy and core scheme which could be combined to give a more diverse and well-rounded offense.