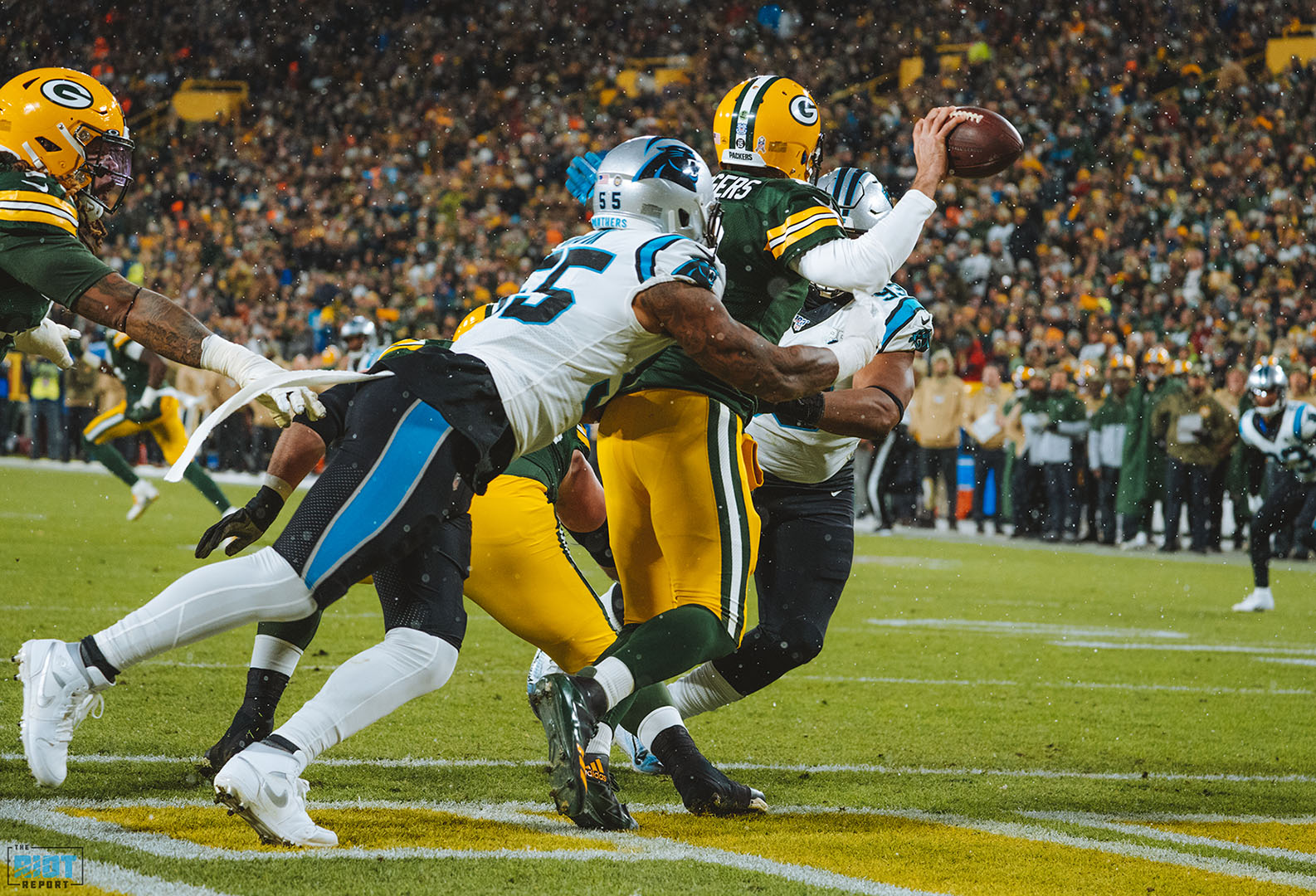 After the Panthers scored a touchdown to pull themselves within one score less than halfway through the fourth quarter at 24-16 on Christian McCaffrey’s 11th rushing touchdown of the year, folks may have been scratching their heads when the offense stayed on the field to go for two.

But only a few days removed from saying that he liked analytics, but sometimes went by his instincts on the field, Ron Rivera made a move that was strictly by the numbers.

“That was purely analytics. 100 percent,” Rivera said. “If you get it there and then you score at the end of the game, then you’re kicking to win the game. If you don’t get it there, then you have an opportunity to go for two again.”

The Panthers eschewed an extra point try, instead choosing to go for two to cut the Packers’ lead to six points with about 12 minutes left. The thought process is sound and analytics supports the decision, but most coaches don’t pull the trigger on this particular scenario – if you convert the first two-point conversion, the second touchdown has you kicking an extra point for the win in regulation. If you miss the first one, you have a second chance to make up that deficit with another two-point conversion, which the Panthers never got the chance to attempt when their final play was stopped on the goalline.

A team that scores two touchdowns and kicks extra points both times will head to overtime, where you have to again stop Aaron Rodgers and score again to win.

“You force overtime against a really good team who could win the coin toss and maybe you don’t get [the ball back in overtime],” said Greg Olsen. “We’ve seen that play out a hundred times. It’s the right call, but we didn’t execute it well on the only two-point attempt, but now you still have a chance – it’s still a one score game.”

While Rivera doesn’t always use the numbers, he uses them as a guide – but likes to take other factors into account, like snow and wind that might have made an extra point less than a foregone conclusion.

“Sometimes, those are some of the factors that aren’t measured.”

“We feel pretty good about the play we had called the first time and we felt good about the second one we had up,” said Rivera. “It’s something where we went ahead and followed the analytics of it.” 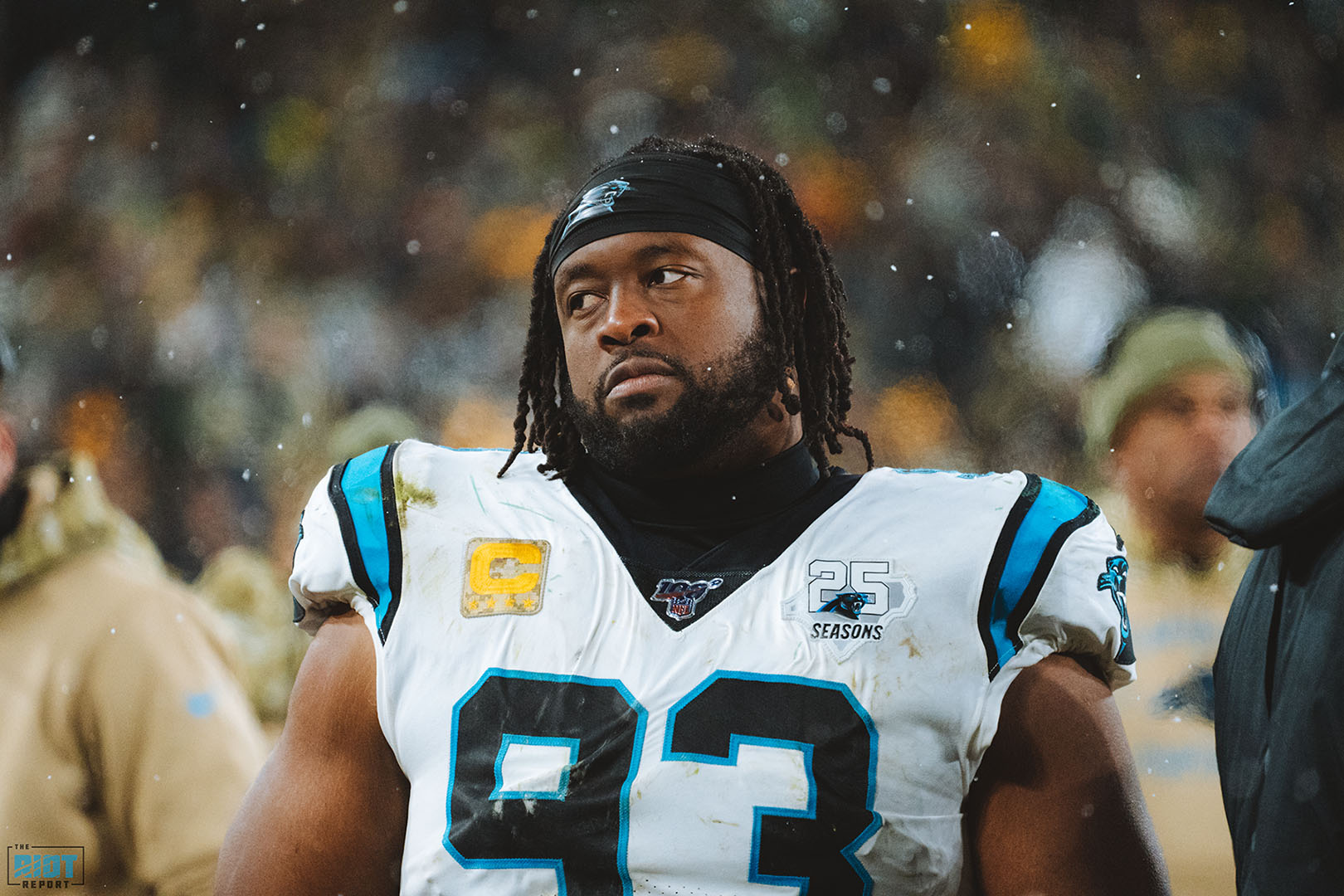 While the Panthers didn’t agree with some of the penalties that went against them on Sunday – no team does – they weren’t willing to place blame on the referees, instead choosing to heap the blame on themselves; in today’s NFL, some calls will go against you and some won’t – looking for help from the guys in stripes is always going to be a fruitless endeavor. The Panthers had five penalties for 46 yards while the Packers were flagged for ten infractions.

But at least one call drew the ire of not only Panthers fans, but players and even the broadcast crew.

A roughing the passer call against Gerald McCoy that turned a failed third-down attempt in their own end zone that would have forced the Packers to punt into a first down, and it had had commentators Joe Buck and Troy Aikman, in addition to FOX rules expert Mike Pereira, scratching their heads.

“I thought [it was] everything you would coach in how to avoid landing with all your weight on the quarterback,” explained Troy Aikman about the McCoy hit; it seemed as if McCoy rolled and landed next to Rodgers, but referee Jerome Boger explained to McCoy that was not the case.

“I don’t know, man,” said McCoy. “I don’t know what you’re supposed to do anymore. I grabbed him, tried to roll off to the side, they said that I put all my weight on them.”

“You can’t control that. Whatever the refs call, you just roll with it and move on.”

McCoy wasn’t willing to blame the referees for what seemed as if it was a missed call – one that kept the Panthers from getting the ball back near the end of the half with what would have likely been excellent field position and allowed the Packers to possess the ball for the final five minutes of the half.

“I think that their job is to protect the quarterback. Aaron Rodgers is Aaron Rodgers,” said McCoy, who would get some measure of revenge as he stuffed Jamaal Williams on the opposite end of the field to prevent a touchdown as the half expired. “There’s a lot of great quarterbacks in this league and it’s the refs job to protect them. The refs, they’ve got a tough job, man. The game’s moving so fast, the greatest athletes in the world moving full speed and you’ve got to make a call, a split-second decision; things aren’t always going to go your way. So, could that have been one of those times they just erred on the side of caution for 12? Yeah, it could have been but, whatever, I can’t control that.”

Even Rodgers thought the call could have gone either way.

“I must say, it’s nice to be on this side of one of those calls,” said Rodgers after the game. “I feel like we still are owed a few more before we’re even.”