Darnold, Panthers defense lead the way in 19-14 victory over Jets 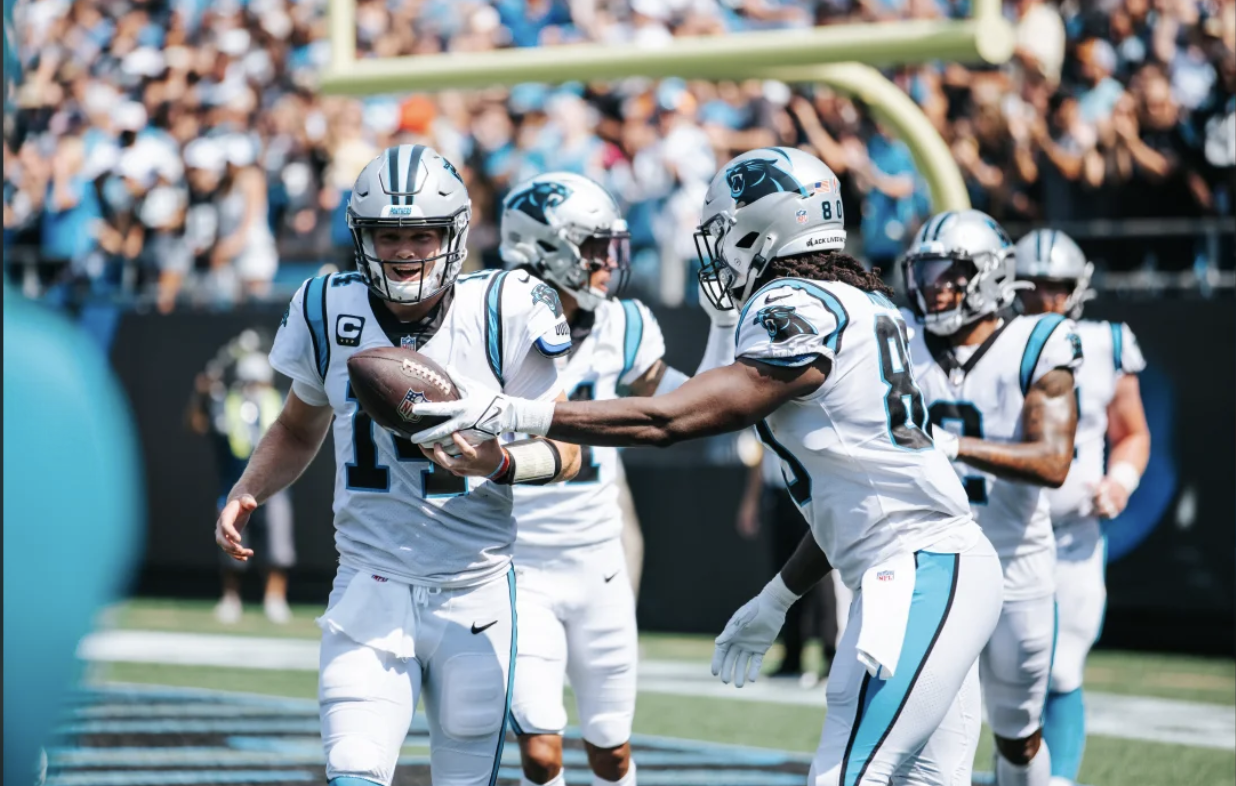 Years ago, during a Monday Night Football game against the Patriots, Sam Darnold admitted he saw ghosts.

Now, in his first game as a member of the Panthers and against that same Jets team that traded him, Darnold downplayed the storyline all week that he was exacting revenge on his former club – there were no ghosts in the locker room. Ultimately, Darnold did get a measure of revenge on Sunday afternoon as he delivered in a big way, completing 24 of 35 passes for 279 yards and a touchdown as the Panthers defeated the Jets 19-14 at Bank of America Stadium.

“I’m not going to lie, seeing them on the other side, that was a little different for me,” Darnold said. “But once you throw that away and you look at the scheme and our offense versus their defense, you kind of forget about it. We just tried to execute to the best of our ability, and that was it.”

Darnold played three seasons for the Jets before the team traded him last April. The third pick in the 2018 Draft compiled a 13-25 record during that span as he threw for 8,097 yards, 45 touchdowns, and 39 interceptions. As the Jets had the No. 2 pick in the 2021 NFL Draft, the team decided to start fresh with quarterback Zach Wilson and traded Darnold for a sixth-rounder in the 2021 draft later and a second-rounder and fourth-rounder in 2022.

The Panthers acquired Darnold with the hopes that he would be their long-term solution at the quarterback position. At least during Week 1, he certainly played the part.  Although Darnold had a tremendous game, it didn’t exactly begin the way he and the Panthers would have liked.

Carolina punted on its first two possessions of the game and when the Panthers were able to get down inside the red zone after a 27-yard catch by wide receiver D.J. Moore, Darnold lost the ball on a fourth-down play when fullback Giovanni Ricci accidentally knocked into the quarterback and the Jets took over at the eight-yard line – bringing up ghosts of the 2020 red zone issues that had plagued the Panthers and the turnover issues that Darnold experienced his first three seasons in the league.

Finally, after the Panthers defense stopped the Jets on a fourth-down play in the second quarter, Darnold completed a 57-yard touchdown pass to Robby Anderson, which made the score 9-0 – Anderson appropriately followed the score with the signature ‘Jets’ celebration. Then Darnold would score on a quarterback keeper to extend the Panthers lead 16-0 after a seven-play, 62-yard drive.

Here’s Sam Darnold’s long touchdown to Robby Anderson that made the score 9-0.

Darnold completed 17 of 22 passes for 234 yards in just the first half as he accounted for a rushing and passing touchdowns. Having a safety valve in Christian McCaffrey, who rushed for 98 yards and caught nine balls for 89 yards, certainly helps – a weapon like that was never lined up next to him in New York.

It wasn’t just the short, intermediate passes Darnold had success with, he also was able to keep the Jets defense honest by completing big plays to Anderson and Moore down the field.

“We were moving the ball early, but not quite getting the points, and I said ‘let’s play complementary football and pin them down so we can get the ball back.’ I thought Sam played well for his first game.” 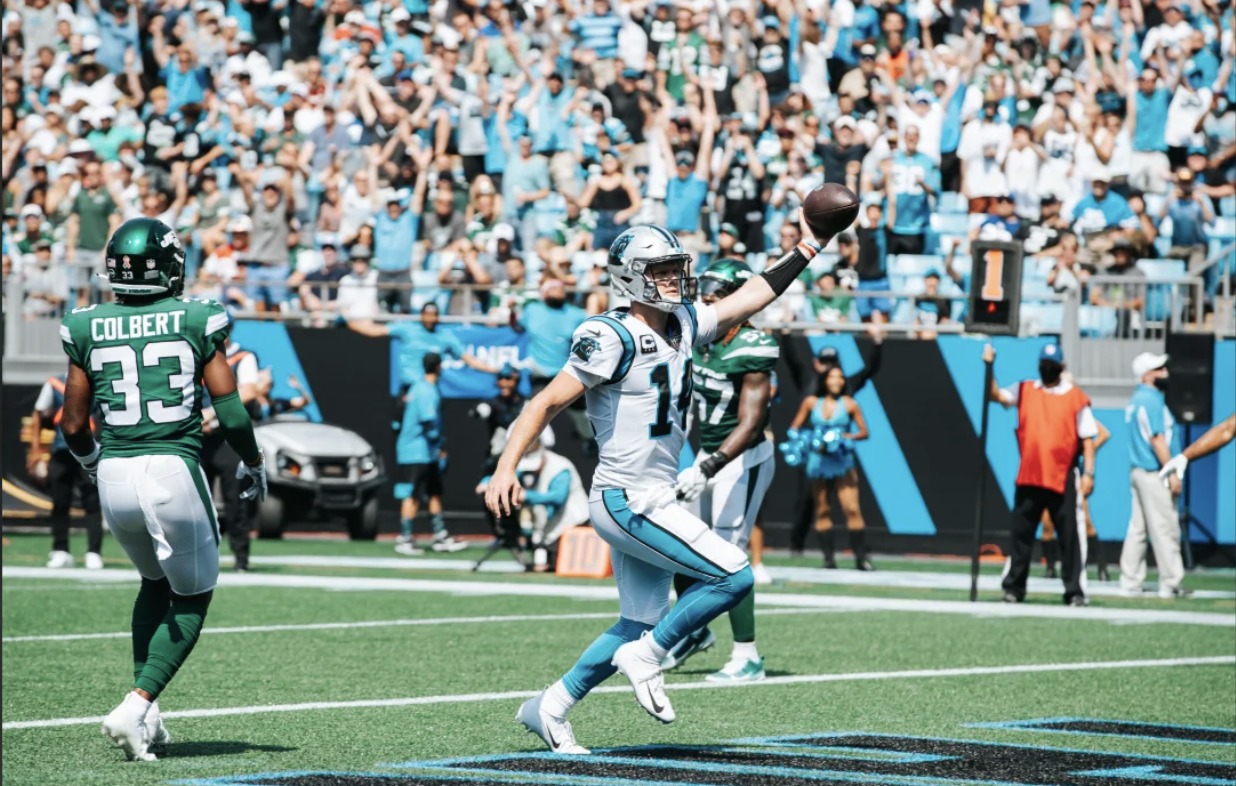 Darnold said he knows the Panthers will need to clean up their red-zone miscues, but he says he is just going to enjoy the team being 1-0.

“I’m sure later on tonight, and tomorrow I will enjoy it, but it was just good to get a win,” Darnold said. “I feel like we didn’t execute as well as we wanted to, especially when we got into the red zone. We just have to clean some things up there.”

Darnold will get a lot of the credit for the Panthers’ performance against the Jets. However, it was the young Carolina defense that set the tone for Darnold and the team’s offense.

On the Jets first offensive drive, Brian Burns sacked Wilson for a nine-yard loss. Haason Reddick, Marquis Haynes, and Davyion Nixon would also join the sack party as Carolina was able to register six sacks on the afternoon.

“I definitely feel like once one person gets a sack, usually it gets contagious,” said Burns after the game. “Everybody starts getting sacks because the quarterback gets a little antsy in the pocket, looking at the rush more than what he should be looking at. I definitely felt like that was a spark to it.”

The Panthers harassed Wilson the bulk of the day as the rookie could never feel comfortable. This was evident by Wilson’s 37.5% completion percentage in the first half, as he completed 6 of 16 passes for 84 yards.

Shaq Thompson also had a monster afternoon as he was able to register 10 tackles, a sack, an interception, and a tackle for loss. Carolina was also able to shut down the Jets rushing attack as the Panthers only allowed 45 yards on the ground on 17 carries.

“We knew they would try to come out and run the football and have quick, easy throws early,” Rhule said. “I thought our defense was able to stop the run well and turn it into a dropback passing game.

“The defense made some big plays for us.”