Decision Time: Should The Panthers Make Taylor Moton One Of The Highest Paid Tackles? 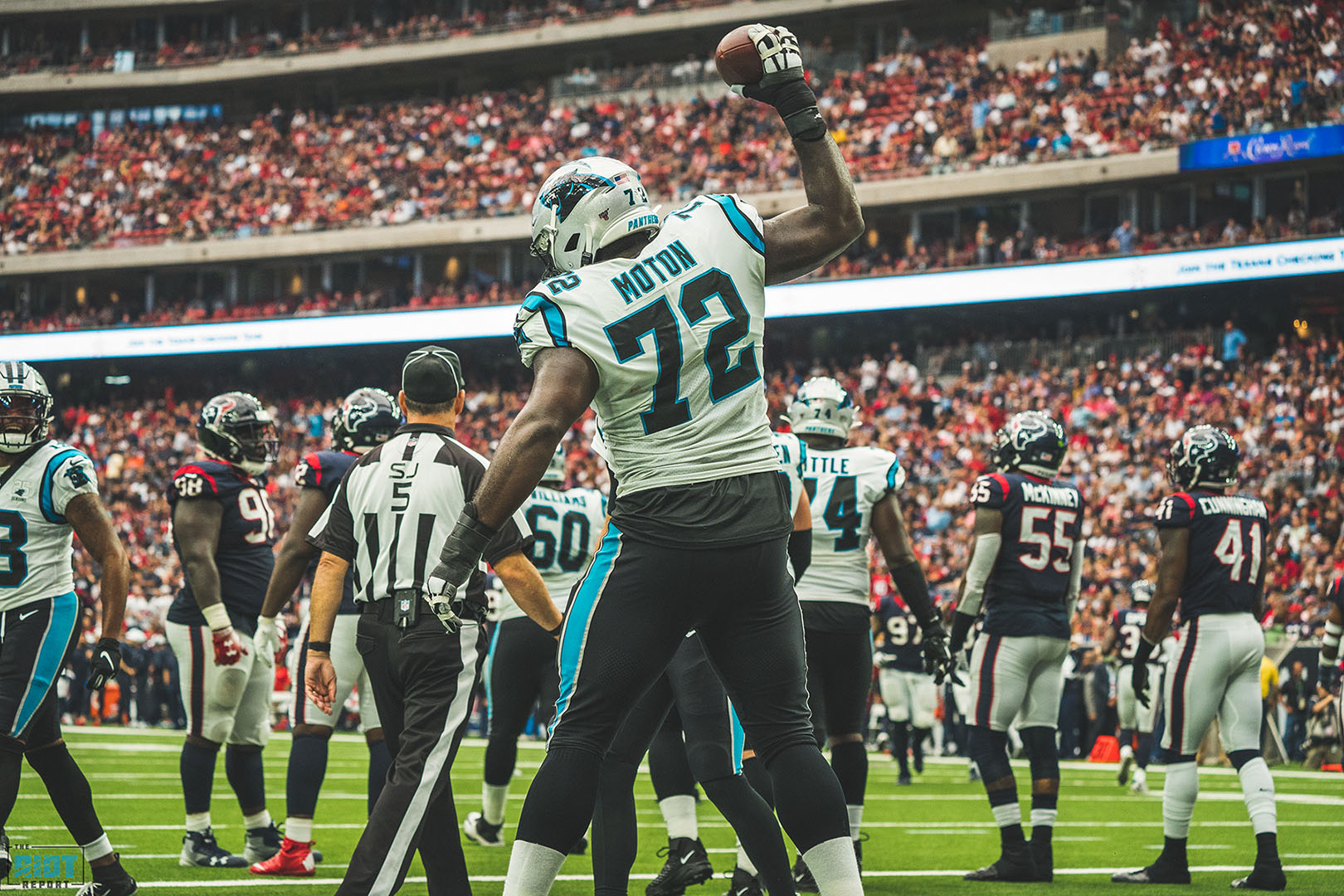 The Panthers have a lot of decisions to make this offseason as they look to take the next step in their retool under Matt Rhule, and a lot of those questions are on the offensive line.

As of right now, the only returning offensive linemen in 2021 will be Greg Little, Dennis Daley and Matt Paradis. Arguably, the biggest decision the Panthers will have to make in this regard is whether to bring back right tackle Taylor Moton – while this will likely depend heavily on what market Moton finds for himself in free agency, the other side of that coin is just how valuable is he and what should the Panthers be willing to pay him to ensure his return.

“He’s had some really dominant moments,” Matt Rhule said last week about Moton. “I know he has been isolated in pass protections, he’s been good in the run game, he’s a solid guy that comes to work every day with a great attitude. He’s now had eight games under his belt of Pat’s [Meyer] style of offensive line play and I think he’s getting better at mastering the techniques that we’re asking him to do.”

While it is all but impossible to answer any questions about his potential market value, we can take a look at just how good Moton is, and just how important is might be for the Panthers to bring him back.

So then, let’s look at the obvious question – just how good is Taylor Moton?

The Panthers’ run game doesn’t tend to ask the offensive line to drive defenses off the ball; instead, they look to generate leverage with footwork and scheme. However, it’s still useful to be able to move the man in front of you and while Moton isn’t going to consistently people into the stands, when he needs to move a man, he shows the ability to do so:

Importantly, he shows this power while also having the footwork to make reach blocks and to generate leverage laterally – this allows him to be effective when reach-blocking 3-techs and adjusting to blitzers through the B gap:

And while he isn’t going to be flying out on screens to block safeties 30 yards down the field on a consistent basis, this foot speed also allows him to work to the second level effectively while still having the control to make a block rather than simply throw himself in the direction of a defender:

However, the knee bend concerns that surrounded him entering the league haven’t completely gone away; he has a tendency to play with quite a high pad level and this can make it hard for him to locate his hands consistently with good arm extension and means that he can struggle to control defenders through blocks as they are able to get below and around him to the ball:

The other knock-on effect of this is that because his pad level is sometimes quite high, in order to match leverage to avoid getting driven backwards, he sometimes ends up leaning at the waist; this, in turn, means his weight gets out in front of his feet and lowers his head, making it harder for him to locate his hands and much easier for the defender to work him off balance:

This isn’t a constant presence in Moton’s tape, and this is helped somewhat by the Panthers not consistently asking him to have to drive defenders off the ball, but if he were to play in an offensive scheme that asked him to run more conventional power plays as a run blocker, he could struggle with intermittent whiffs.

Moton is a good run blocker, especially in a scheme like the Panthers, though if he were able to improve his pad level, he could improve further and make himself more flexible in terms of schematic flexibility.

The fundamental basis on which pass protection is built for offensive tackles is foot speed – if a player can’t stop the speed rush, they are just going to get run around on a consistent basis. While Moton is not in the very top tier in this regard, he is able to cover the edge against most edge rushers:

He also does a consistently good job of locating his punch and while his arm extension is a little less consistent he does a good job of securing blocks when he gets in position to make a punch:

He also does a good job of just executing – while you shouldn’t draft offensive linemen based just on their ability to pick up stunts and the like, it is important to be able to do this stuff consistently well, and Moton does:

However, Moton does also have some consistency limitations and issues in pass protection that need to be considered as well. As mentioned earlier, he does have limitations in terms of foot speed – better speed rushers can get the better of him at times:

And even when he doesn’t get beaten by the speed itself, he can be forced to break his footwork in order to prevent the speed rush, which can then create vulnerabilities back inside:

In both cases above, his good hand usage allows him to get away with this somewhat; he is able to prevent the defender from being able to get inside of him without contact. However, this is a vulnerability that teams can exploit, especially on plays with deeper drops and slower-developing concepts.

However, once again, his biggest vulnerability is his pad level, and the way in which interacts with foot speed. The most direct impact of the pad level is the way it impacts his hand usage – when he doesn’t get low enough, he is unable to direct his punch to the frame of the defender while also making it easier for the defender to get under his shoulders, thereby allowing them to turn the corner:

The other major impact that his occasionally poor knee bend has in pass protection is that it raises his center-of-gravity and therefore making him vulnerable to being bull-rushed. This really showed up in the game against Chicago where Khalil Mack in particular was consistently able to use his quickness to cause Moton to get more upright in an attempt to cover the edge before driving back inside and looking to attack him with power:

But this isn’t something that was unique to the Bears game:

However, as in the run game, doing this gets his weight out in front of his feet, which similar to the run game makes it hard for him to locate his hands and also makes him vulnerable to being worked around by pass rushers with good hand usage:

And finally, when he gets his weight too high, it makes it harder for him to balance – there are a couple of times where he gets caught with his arms wide trying to maintain his balance:

It would be unfair to say that Moton is a bad pass protector, because he’s not – he’s above average, in fact – but he has limitations in terms of foot speed. More importantly in terms of the consistency of his knee bend. Despite this, he is a consistently effective offensive tackle in pass protection, who does the utmost within the confines of his physical limitations:

The Panthers should want to bring Moton back – they would be foolish not to offer him a new contract when his deal expires at the end of the year.

However, while Moton is a good NFL offensive lineman, his limitations in pass protection make it hard to view him as an elite one, as the game against Chicago in particular showed that when asked to go one-on-one against one of the NFL’s elite edge rushers, he is going to be give up pressures. Not getting the better of Khalil Mack shouldn’t be a reason to dismiss Moton as a good player, but the Panthers have to be careful not to get caught paying good players like great ones, something that was a notable feature of Marty Hurney’s first tenure in Carolina.

If Spotrac’s projection of a four-year, $65m+ deal for Moton is accurate, the Panthers need to be willing to walk away – as good as Moton is, the tape just doesn’t support the idea of him being a top-5 NFL tackle, which is the ballpark that type of contract would suggest.

Not to mention the questions about what will happen with the salary cap in 2021 after the NFL produced much less revenue than was expected during the current season.

Moton returning to Carolina shouldn’t be dismissed, as there is always a chance that the market is much cooler on Moton than projections, which are a fairly inexact field, would indicate – but if the choice is resigning Moton or bringing back Curtis Samuel, John Miller, Rasul Douglas, Corn Elder and Efe Obada, the latter collection of players are likely to move the needle far more than a good right tackle – even a very good one.