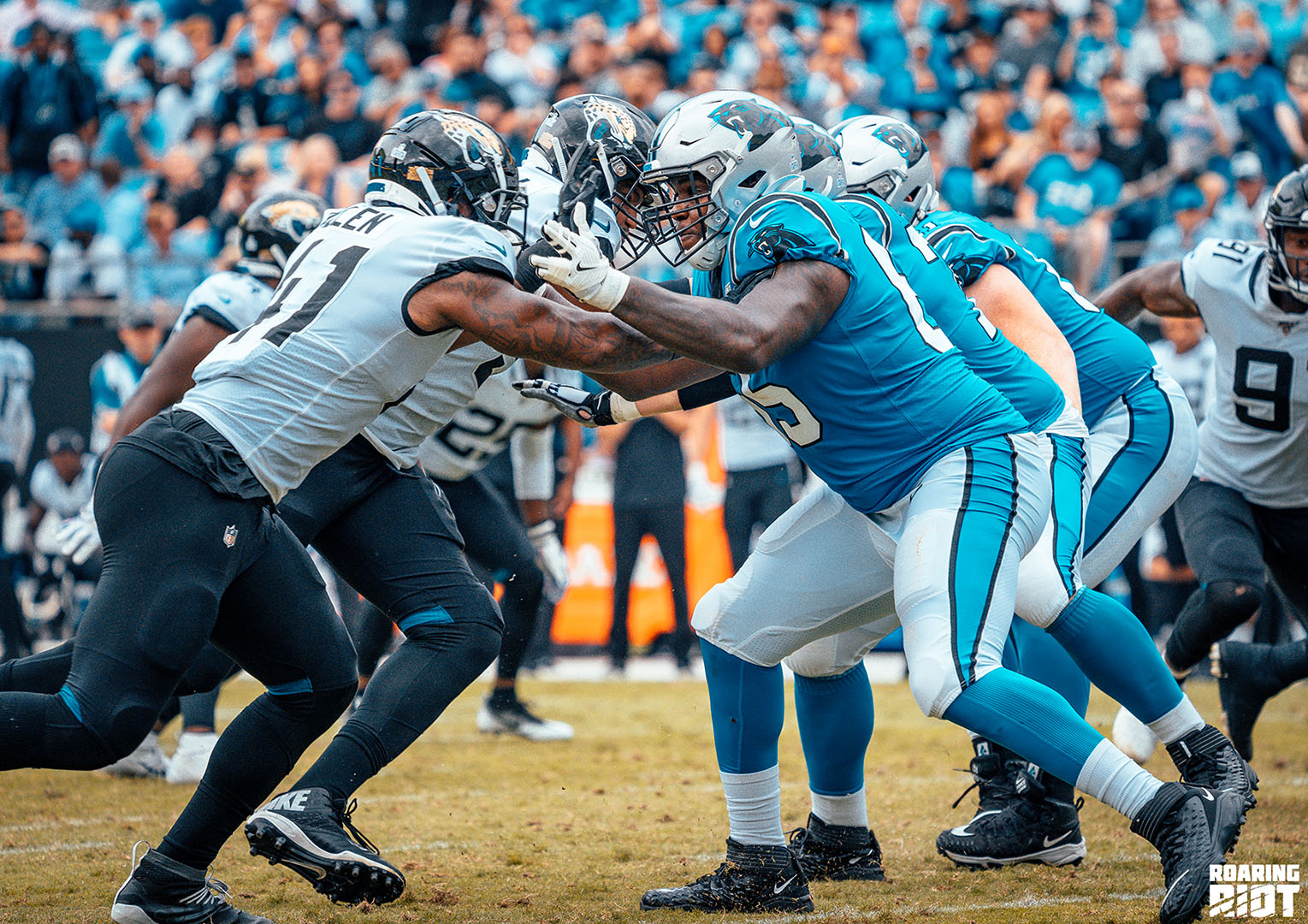 The Panthers have had a different starting left tackle every season since Jordan Gross retired, but over the past three weeks they have decided to accelerate the process somewhat and have a different left tackle to start every game.

The latest man to have a go at the job was sixth-round rookie Denis Daley – and while it seems unlikely that the Panthers plan to have him as the long term solution at the position, it seems to be his for as long as Greg Little is out; the better Daley plays in Little’s absence, the harder it will be for Little to displace him when he does return. It would also appear that Little remains in the concussion protocol and, even though he will travel to London, the Panthers will look to Daley to slow down the man with the most sacks in the NFL, Shaquil Barrett – a task Daryl Williams wasn’t exactly up to in Week 2.

So let’s take a look at how Daley fared against Jacksonville and what he needs to do to continue getting better.

It’s no secret that the Panthers ran the ball a lot on Sunday – and ran it well – Daley was asked to do a lot as part of the Panthers’ rushing attack. A major part of Daley’s value as a draft prospect was in his potential, as while he was in need of some technical development, his athletic ability was easy to see on tape. This also showed up in the run game on Sunday, as he exhibited the power to move defensive linemen (Daley is #65)

Here, he uses his hands well to prevent the defender from driving him further upward and is still able to deliver the power to open a hole outside. Ultimately, his failure to get inside hand placement is what allows the defender to break free at the end of the play, but by that point, Daley has already driven him out of the action. In addition to this power, he also showed the foot speed to work to the second level well:

Again, he could have done a better job of keeping his hands inside his frame in order to control the block more effectively, but this combination of foot speed and power is rare. However, there are a lot of athletic offensive line busts in NFL history – in order to make the most of his athleticism, it is important that Daley is able to combine his athleticism with technical proficiency.

For example, he shows nice foot speed once again on this play, but in trying to block two people, he ends up blocking neither:

This might not be the most radical piece of analysis, but when you don’t end up blocking anybody on an inside run as an offensive lineman, something has gone wrong. However, there were some plays where he did show some really nice things from a technical point of view.

On this next play, he isn’t that important to the success of the play, but from a technical point of view he does really well. He shows a nice knee bend to keep his weight down and has his weight evenly distributed laterally, making it hard for him to be driven off balance. Additionally, he trusts his strength to generate the push, without overly leaning into the block – so when the defender moves laterally to try and escape, he is able to maintain his balance:

Again, there are things he can do better, but he is doing a lot of nice things from a technical point of view. While this run went away from Daley, a number of times he was asked to drive the edge defender wide at the point of attack, and he did this really effectively at times:

On this next play, he just fails to step into the block, and so the defender is able to simply run around him. He assumes the defender is going to hesitate and when he doesn’t, he is left watching. This should be easier to fix.

Finally, from a run game perspective, it is worth taking some time to look at how Daley was asked repeatedly to make difficult reach blocks on defenders and how he fared very well in this regard. This ability opens the door to far more aggressive playcalls for the offense, even if they need to not get too far ahead of themselves. The aim with these blocks is the blocker to start outside the defender but then work around and inside the defender in order to create an inside crease. This is an example of Daley using his excellent foot speed to do just that:

However, what was particularly encouraging about how Daley approached these blocks was that he didn’t solely focus on getting inside his defender, as some blockers have a tendency to do, but instead made sure that he located the block first, so that even when he wasn’t able to create the nice inside crease, he was still able to prevent the defender from being able to make the tackle and give the running back a chance to read the block and still make a play:

There are things Daley needs to work on as a run blocker, and things like pad level and arm location are a work in progress for all young offensive linemen as they look to adjust to the higher standards of the NFL, but from a run blocking point of view Daley did an excellent job on Sunday – given that the Panthers will likely be leaning on the running game for at least one more week in order to take pressure off of Kyle Allen, now is not a bad time to have a good run blocker at left tackle.

However, the reason why the players who play left tackle at the NFL level play there and not elsewhere on the offensive line is because they are usually the most proficient pass protectors, so how did Daley get on in this regard?