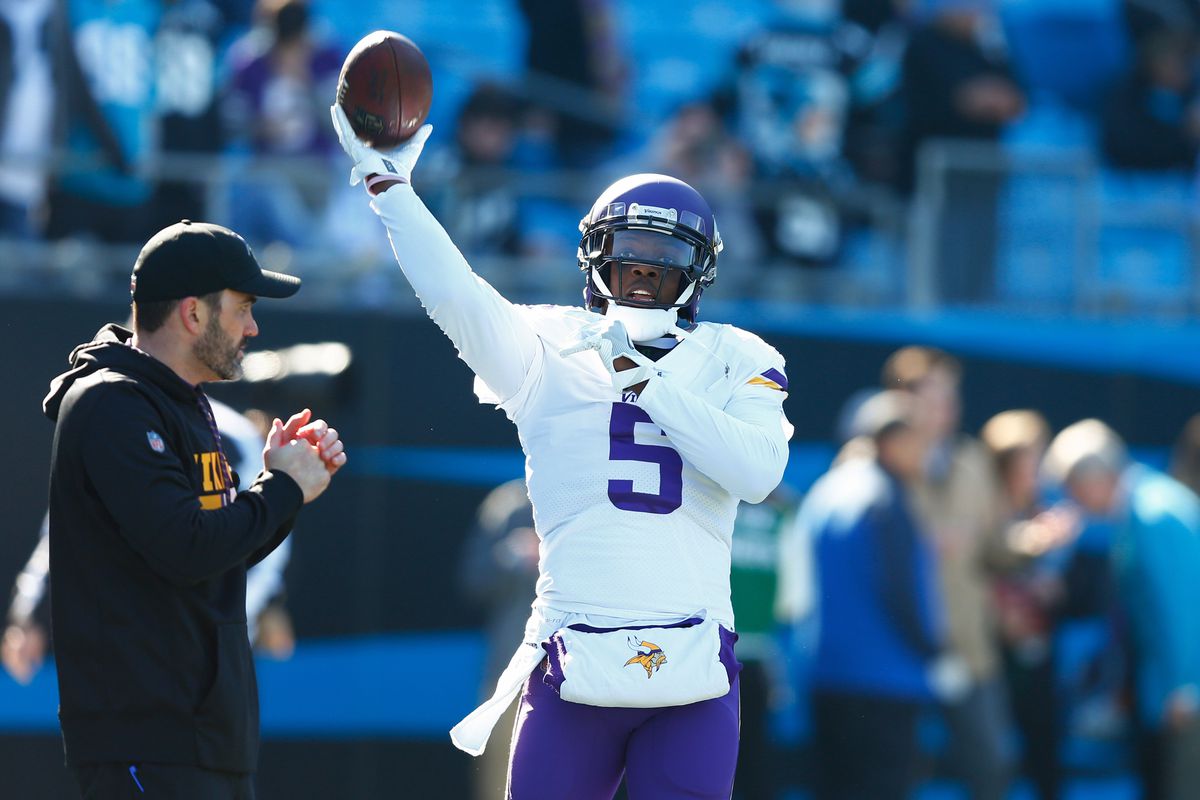 Going from Cam Newton to Teddy Bridgewater is not going to be an easy change. The former Vikings and Saints quarterback has made his way to Charlotte and is coming off a brief 2019 season in which the Saints were 5-0 with him as the starter, but the memories of Newton will likely overshadow every throw that Bridgewater makes in Carolina .

In five games last season, Bridgewater completed 67.9% of his passes for 1,384 yards, nine touchdowns, two interceptions, and a passer rating of 99.1. He was solid in relief of Drew Brees, but his limited experience in this timeframe has concerned Panthers fans over his three-year, $63 million deal he signed in the offseason.

But the biggest concern is that Teddy apparently doesn’t throw the deep ball.

See, he’s had a narrative of being too conservative and not taking enough risks down the field. As I was investigating, I began to think that two things could potentially have fueled this narrative: first, in Minnesota during 2014 and 2015, he was playing with the absolute worst offensive line in the league in 2014 and 2015, as well as a bad receiving corps whose best option was rookie Stefon Diggs and a raw Adam Thielen that rarely saw playing time in those seasons. Second, the Saints offense last season was rarely known for throwing the ball deep, reflected in Drew Brees’ deep charting – in 11 games, Brees was only asked to throw the ball 30+ yards SIX times in 2019.

The way I see it, there’s two sides to this: 2015 Teddy Bridgewater was not an inaccurate deep passer, though I will say it was rare to see him rip a pass of 31+ yards – but there were reasons for that. Last season, he threw nine passes of 21+ air yards, which in my charting counts as a deep pass. Nicely enough, six of those nine passes were accurate. Bridgewater didn’t have nearly enough deep attempts to qualify for the Deep Ball Project’s charting, but he would’ve ranked first in accuracy percentage with 66.67% (albeit an extremely small sample size).

Before we take a look at Bridgewater’s 2019 season of deep passing, however, let’s take a quick look at how he was doing throwing the ball deep during his time with the Vikings.

First up is Bridgewater’s first career start back in 2014 against the Falcons. On this particular play, he’s targeting wideout Greg Jennings (yes, THAT Greg Jennings).

As he approaches the top of his drop after the play fake, Bridgewater is met with both interior and edge pressure (purple and turquoise circles) while Jennings is breaking off the top of his route (blue circle). One area he was always good at with the Vikings – and with the Saints as well – was navigating around pressure, and in Minnesota he clearly faced more than a necessary share of that.

Subtly, Bridgewater glides right of the edge pressure, then hops up the pocket to avoid the interior rusher. It’s then that he’s able to get the throw out cleanly to an open Jennings. The pass itself isn’t spectacular, but the calmness and the movement under pressure really set this play up for success.

Back again is Jennings as we warp to the Vikings’ final game of Bridgewater’s rookie season against the Bears.

This is a pretty tight window for any quarterback, let alone a rookie, to fit this ball into, yet Teddy is able to do so. There’s just one problem: Jennings can’t hang onto the ball.

Initially ruled a touchdown, replays showed that Jennings bobbled the ball as he hit the ground, and the pass was ruled incomplete.

A shame, because Bridgewater threw this beautifully into a tiny crease that at the same time was well out of danger of being disrupted. Bridgewater’s deep passing was never sensational — but it was always better than average.

While he had the tendency to take the lay-ups, when he pulled the trigger on the deep ball, it was there.

Fast forward to 2015, where Bridgewater had the “privilege” of playing the year’s best defense in Denver behind the year’s worst offensive line. In spite of this, he played really well, making plays under pressure and keeping the Vikings in the game before slipping away in a close fourth quarter loss.

Here, Von Miller is the hungry customer looking for Bridgewater as the special, and the Vikings offensive line doesn’t offer much to disrupt the future Hall of Fame edge rusher.

Miller easily gets free and looks set to take down Bridgewater…

…but Bridgewater has other plans.

Somehow, some way, Teddy is able to get this ball out to Stefon Diggs as he’s getting dragged to the turf in one of the more memorable plays of his career. It also speaks to how well he responds to pressure, barely letting it affect his processing and instead pushing the ball down the field with a perfect throw. In 2015, Bridgewater attempted a pass of 21+ yards on 17% of his throws, not quite as often as Brees (18.6%) that season, but more than Tom Brady (15.8%). Cam Newton threw it deep on 20.2% of his attempts during his MVP campaign.

Bridgewater didn’t have that many deep attempts (76), but that was a product of running Mike Zimmer’s offense through Adrian Peterson – the Vikings had the fewest pass attempts in the league in 2015.

As we’ve seen, Bridgewater can process and play well under pressure, but in New Orleans last season he didn’t need to all that much – they had one of if not the best offensive lines in the NFL.

The steep upgrade in pass protection (and really, it’s not even close) combined with the presence of Michael Thomas, Alvin Kamara, and the play calling genius of Sean Payton made for a far more comfortable environment for Bridgewater. Expect Joe Brady’s offense to look similar to the Saints – which means a lot of short to intermediate throws; but when Bridgewater has the matchup he wants – and he should, with Moore, Anderson and Samuel will be one of the fastest groups of wideouts in the league – he has shown he can hit the open man.

For our two examples of his time throwing deep with New Orleans, let’s forward to the latest start of his career to date at Chicago.

Ted Ginn, a familiar face to the Panthers, is the recipient of this play. The most infamous part of Ginn’s game is that he’s left significant plays on the field (as Cam Newton and fans can attest to).

This play is no exception.

Behind first class pass protection, Bridgewater presents a well thrown ball to Ginn, who experiences whiplash when a Bears defensive back rams into him at the catch point. Still, with more ball security, this should easily be a touchdown. Much like the earlier Jennings play, this ball falls to the turf.

Much later in the game, however, Bridgewater saved his best throw of the year to Michael Thomas late in the fourth quarter.

Via Player Profiler, Thomas had an Average Depth of Target (ADOT) of 8.3 yards in 2019, which was ridiculously low. For comparison, D.J. Moore (considered a short area receiver) had an ADOT of 11.3. The Saints are also a team that can’t compare in deep attempts to the likes of the Chiefs or the Bucs, so it’s rare to see them attack anywhere but the short and intermediate levels of the field.

Just like old times, Bridgewater is met with edge pressure in the shape of Aaron Lynch (blue circle, and Thomas is highlighted by the yellow circle).

At this point, I should also mention that while the nasty knee injury Bridgewater suffered just before the 2016 season took a toll on his days in Minnesota, he showed he was still pretty mobile with the Saints. This was always an underrated part of his game in Minnesota (and one could argue it paid dividends when the team won the NFC North in 2015), and it shows up here.

As Bridgewater rolls left, he’s able to get this ball out on the run, and beautifully, to Thomas down the field.

Notice how Bridgewater doesn’t lower his eyes or stray from the play design, instead choosing to roll out and toss a beautiful tight-window dime to Thomas just outside the numbers. Looking back, it makes sense that the Panthers thought so highly of Bridgewater’s play, considering how stable he’s been under pressure.

While Bridgewater hasn’t exactly been on Russell Wilson levels of deep passing attempts, whenever he has reached for those throws, he’s shown to be solid at it. His arm strength isn’t sensational, but it’s also not at the abysmal levels of Kyle Allen – and, as stated, he’s still a pretty mobile quarterback.

Whether Bridgewater can play well enough to bring the Panthers back to the playoffs is yet to be confirmed. He’s playing behind an inferior offensive line to the one he played behind in New Orleans, but has a good arsenal of weapons in Christian McCaffrey, D.J. Moore, Curtis Samuel, Robby Anderson, and Ian Thomas.

Combined with Joe Brady, this should be enough for him to have a decent amount of deep passing in 2020 – but if it will be enough to dispel the ‘he can’t throw deep’ rumors remains to be seen.