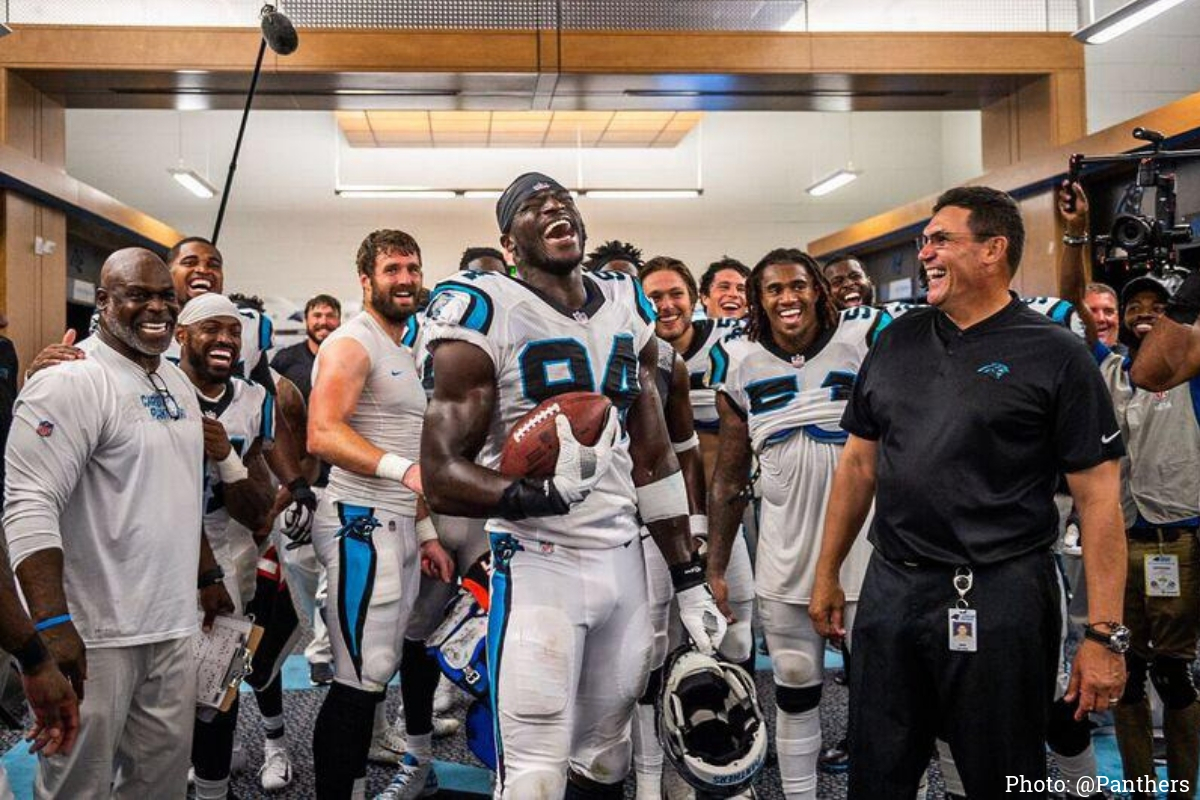 There are going to be a lot of pieces out there today about Efe Obada – a story like his literally seems as if it’s plucked from the movies – born in Nigeria, moved to Amsterdam, abandoned on the streets of London, never played a down of organized football until he was 22 years old – fast forward three years and he’s in the NFL’s International Pathway Program, with stops on the Cowboys, Chiefs and Falcons practice squads along the way – the now 26-year old was assigned to the Carolina Panthers with a special roster designation. The 6-6 defensive end could sit on the practice squad as an extra player without taking up a spot, essentially allowing the Panthers to carry an extra body for practices and the scout team.

There are many players that would be happy to be here – especially ones that had played five professional games for a British American Football squad called the London Warriors in front of 1,400 fans before coming to America and playing in the NFL.

But not Efe – Obada continually said he wasn’t happy being on the practice squad; it was the reason he was first to every practice and one of the last to leave at night – the reason he spent hours a day in the gym and in the film room. And when he made the roster, he wasn’t satisfied with being a warm body that was inactive on gamedays – that when his name got called, he knew he would make the most of it.

After getting an interception, a sack and almost forcing a fumble in his first NFL game, is Obada satisfied?

Obada came screaming around Bengals tackle Cordy Glenn in the second quarter and appeared to jar the ball free from Andy Dalton and into the arms of a waiting Captain Munnerlyn to force the Panthers second turnover of the game, but that apparent strip-sack was downgraded to simply a quarterback hit after replays showed Dalton’s arm moving forward, so Obada followed that up a quarter later with an athletic sliding interception that would lead to a touchdown. He’d also pick up his first sack during a key fourth quarter series with the Bengals down only a score to begin the process of salting the game away for the Panthers as he raced around Glenn again, whom the Bengals traded for to shore up their offensive line.

“He came up to me,” Obada said of the left tackle whose cap hit is a hair over $11m while Obada makes the minimum. “He was like … ‘Where did you find this guy?’”

That idea that Obada hasn’t shown everything he needs to show was echoed all throughout the locker room:

Mario Addison: “He hasn’t even scratched the surface yet – be looking for Efe.”

Julius Peppers: “I like everything about him; he’s built very well with a lot of power and a lot of speed; I think the most important thing is he works on his craft every single day. That’s just what happens when you’re a good person and you work hard and you get your work in.”

Marty Hurney: “Ron’s been pounding him since training camp; Ron has seen something in Efe since Day One and his work ethic is incredible; he’s got length and pass rush skillset. Ron has been talking about him for a long time and for a guy to come in at this stage and make the plays he did with really the little amount of football he has – think of the upside he’s got.”

It Is What It Is: DE Efe Obada

As he stood in his locker quietly dressing after the horde of reporters had stepped away, Obada seemed to pause and take it all in – he turned to the couple of us who were speaking with Addison.

“Don’t take my ball,” Obada joked, gesturing towards the game ball that was in his locker. Addison, who said he has only been given two game balls in his 97 career games, directed the younger defensive lineman to give the ball to an equipment manager, who would inscribe it; Obada didn’t want to give it up at first, but eventually acquiesced – not before warning the equipment manager that he knew where he worked if he lost his first game ball.

“That means you played outstanding.”

If there’s one thing we know about Obada, outstanding is just the beginning.