Eight Plays That Mattered As The Panthers Beat the Titans 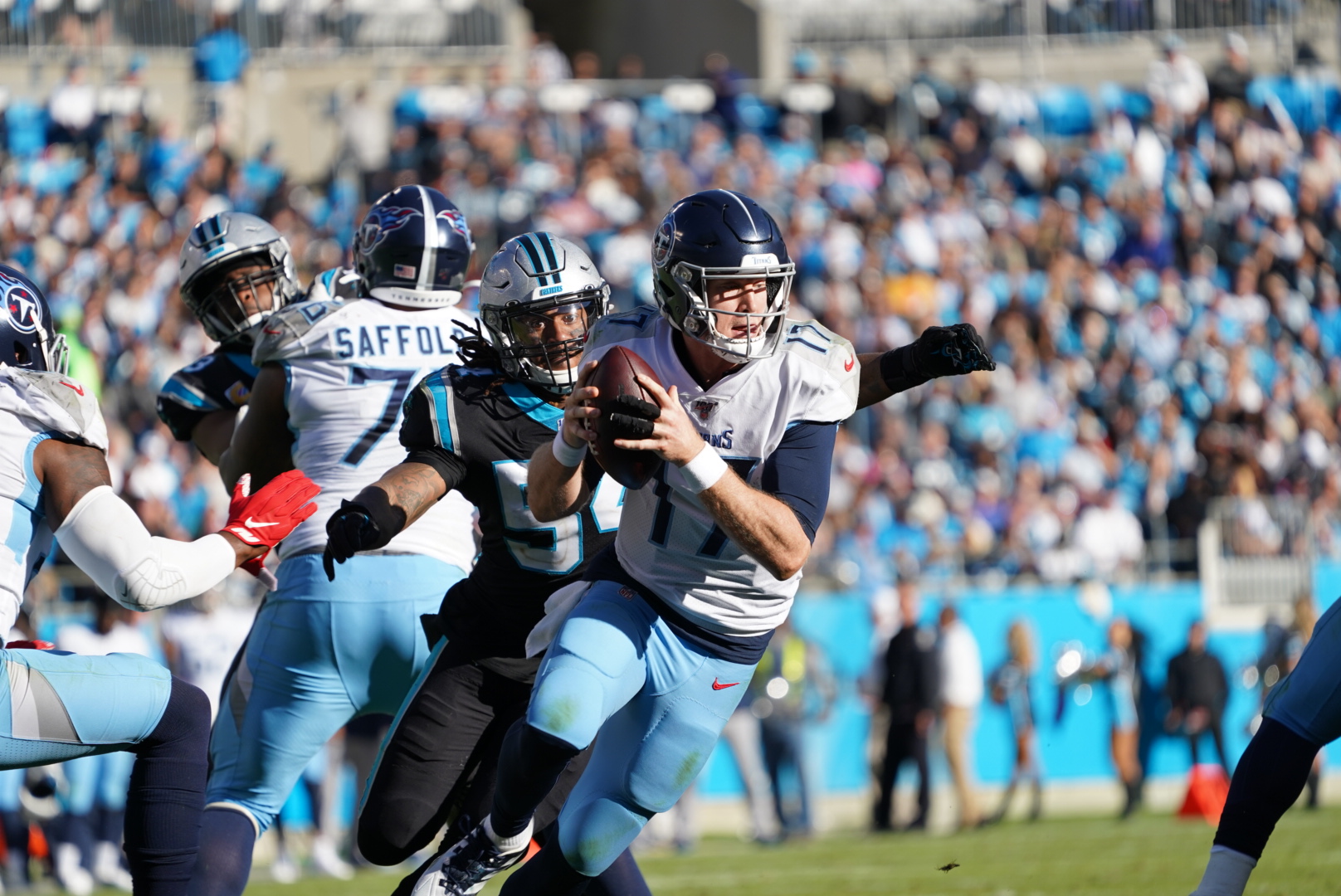 Coming off of a 38-point loss to the 49ers and just hours after the news that franchise quarterback Cam Newton would not be back for the forseeable future, the Panthers responded in a big way with an impressive defensive performance, Kyle Allen doing what he needed to do to win the game while bouncing back from an early mistake and – yet again – a big game from Christian McCaffrey as they defeated the Tennessee Titans 30-20 to move to 5-3 on the season.

Here’s how it happened. 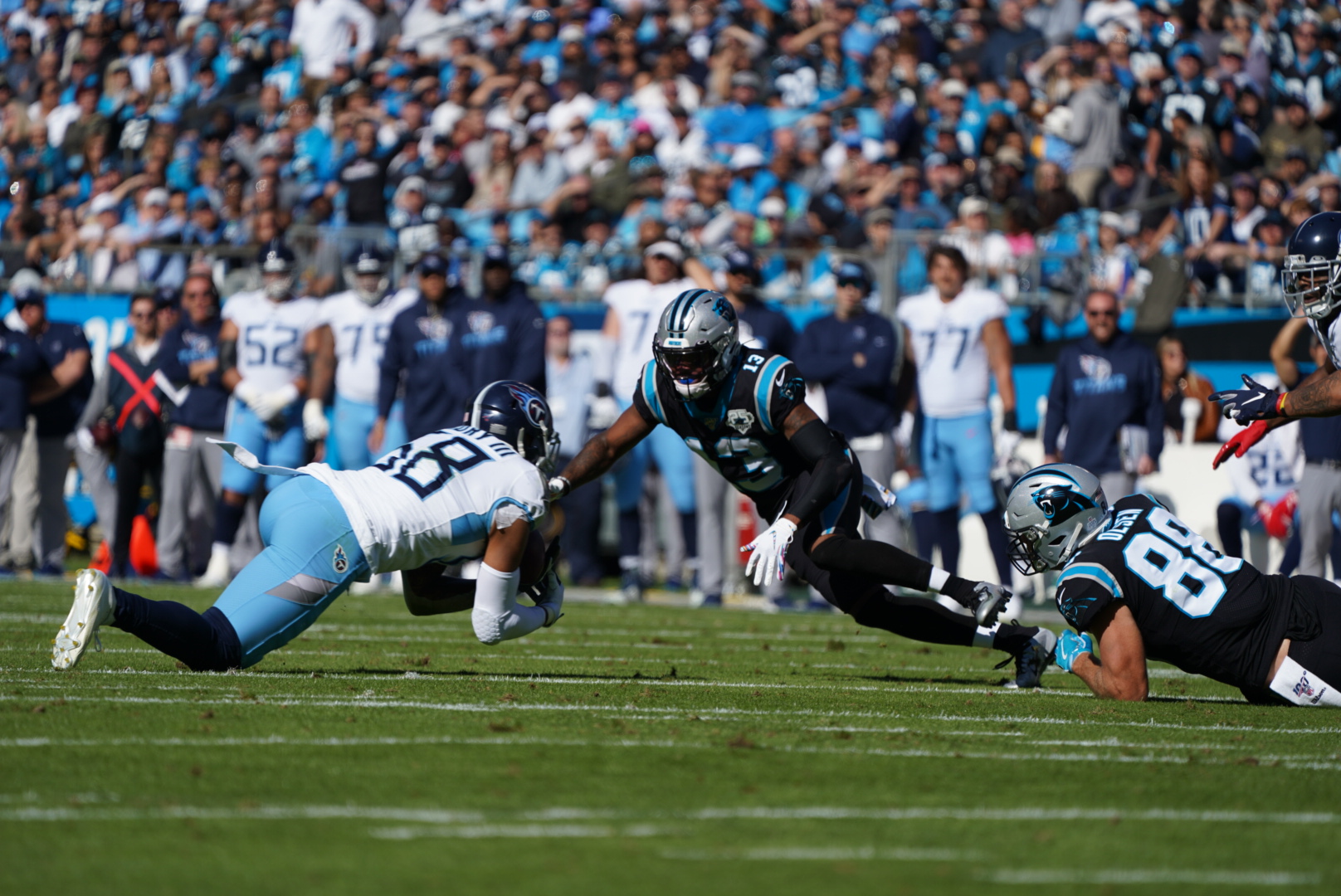 Against a team like the Titans, the Panthers had to make sure not to make mistakes, take advantage of any opportunities for points they could and let their defense rush the passer ferociously and force turnovers – the kind of defense that had been the hallmark of their four-game winning streak. After a phantom 42-yard pass interference penalty on James Bradberry produced a missed field goal for the Tennessee offense on their first drive, Kyle Allen came out firing with a 23-yard completion to Greg Olsen – a McCaffrey run and Titans penalty quickly put the Panthers into field goal range at the Titans 35-yard line.

But a double-reverse to Jarius Wright was sniffed out by second-year linebacker Harold Landry, who has 42 tackles and five sacks thus far this season, before a Kyle Allen pass was tipped in the air by Wright and then intercepted by a diving Landry. The Panthers would end the first quarter scoreless despite gaining more than twice as many yards as the Titans and having five first downs compared to the Titans one.

Away From The Run 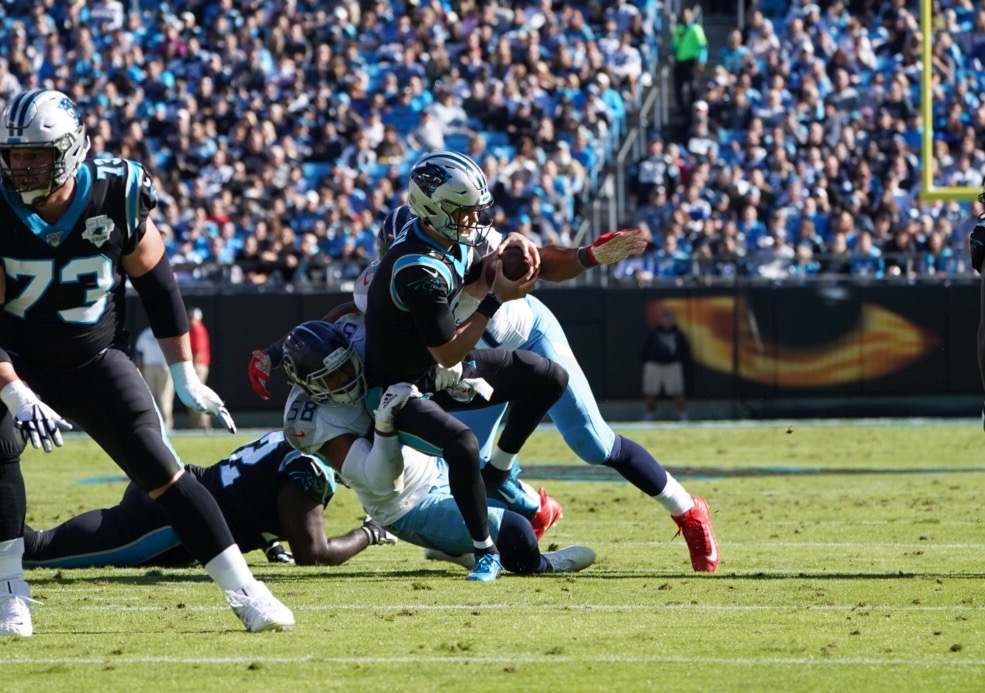 On their third offensive possession of the game, the Panthers decided to use Christian McCaffrey more. After an Allen 32-yard pass to Curtis Samuel that just barely cleared corner Adoree Jackson, Carolina handed the ball off to McCaffrey four straight times for 24 yards to advance to the red zone. Then Carolina ran three straight times – and on third down, Harold Landry was able to sack Allen and bring out Joey Slye for a 35-yard field goal.

McCaffrey, on that one drive, was able to record 25 yards on five carries even facing multiple instances of eight-man boxes stacked against the run; the decision to pass inside the red zone clearly broke the Panthers’ momentum as the Panthers had to settle for three points instead of getting seven on that series. 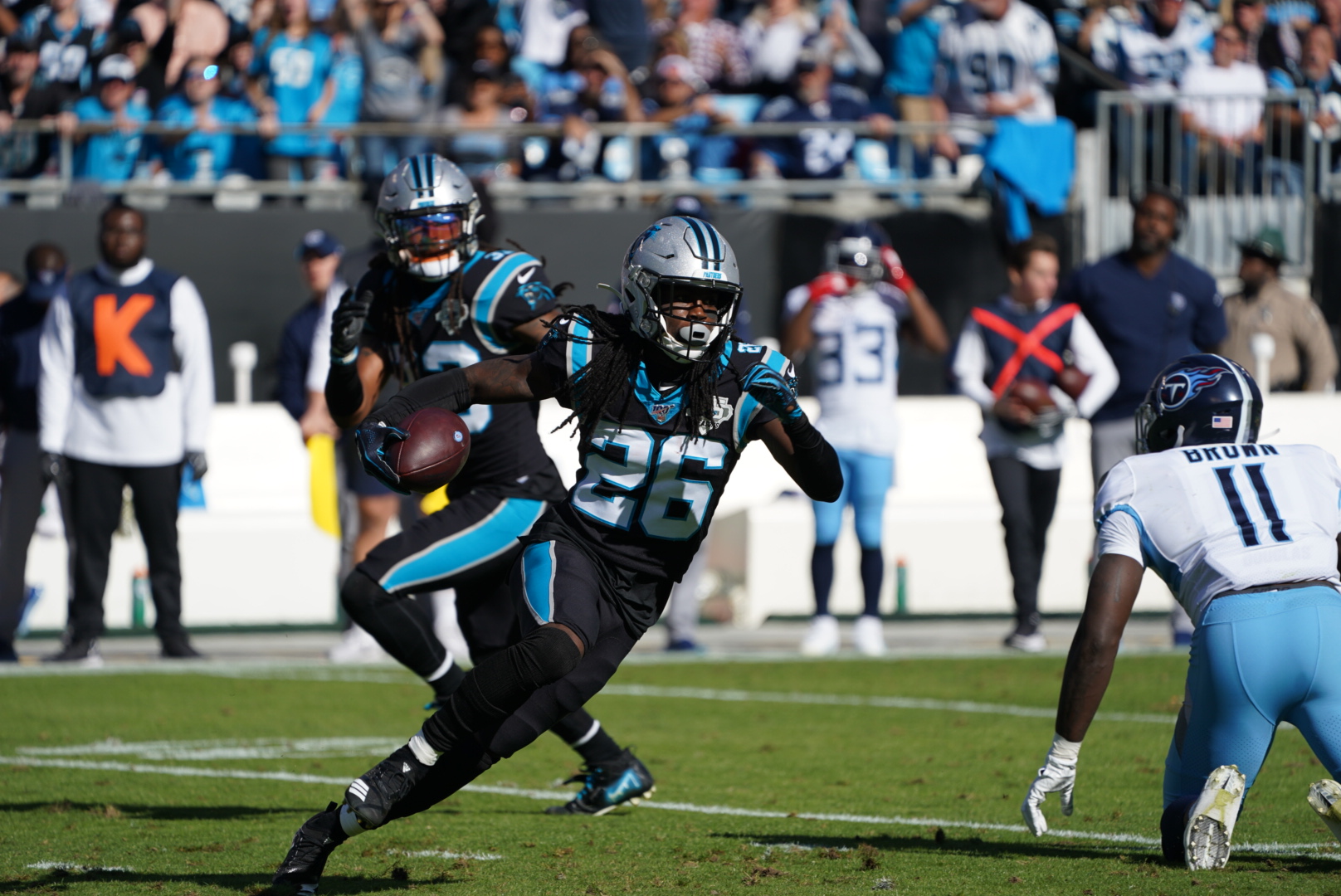 With the Panthers up 3-0 in the second quarter, Donte Jackson secured his second turnover of the game and third interception of the season as a pass tipped by rookie A.J. Brown fell right into Jackson’s hands. The second-year cornerback, who returned last week after missing three games with a lingering groin injury, recovered a Dion Lewis fumble that was forced by Eric Reid earlier in the game – this time, he gifted the Panthers with terrific field position after a face-mask penalty added yardage to Jackson’s return.

The Panthers’ 16 takeaways through eight weeks ranked third in the NFL heading into their Week 9 matchup with the Titans and they added three more on the day. Coming into the day with the second-most sacks in the league, they also added four to that total as they were in the backfield for much of the day.

The Riverboat Floats On McCaffrey Waters 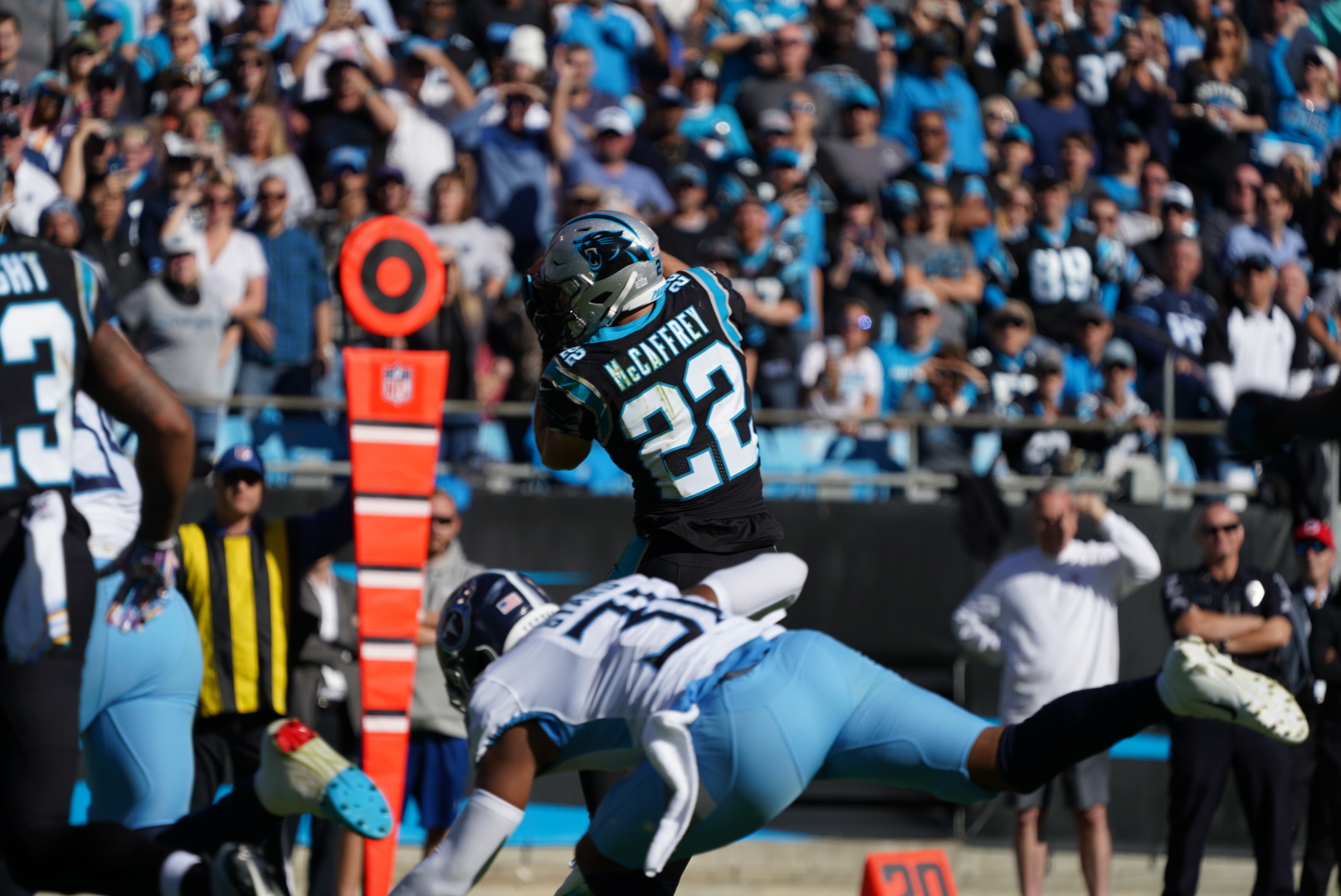 After the Jackson interception, Carolina went right back to using McCaffrey as he ran the ball on the first two plays of the drive, which started at the Titans’ 15-yard line. Then, on 3rd-and-2, the Panthers decided to run a play-action rollout with Allen., which the Titans were ready for – but it appeared offensive coordinator Norv Turner and head coach Ron Rivera had a plan in mind if they weren’t able to convert on third down.

Unlike the Titans, who attempted and missed a field goal with Ryan Succop on a 4th-and-1 earlier, the Panthers went for it on 4th-and-2 from the Titans seven-yard line – and it paid off. While Tennessee expected a run, Allen ran a play-fake that froze the Titans defense just enough to leave McCaffrey wide open for the seven-yard touchdown pass and the Panthers went up 10-0. 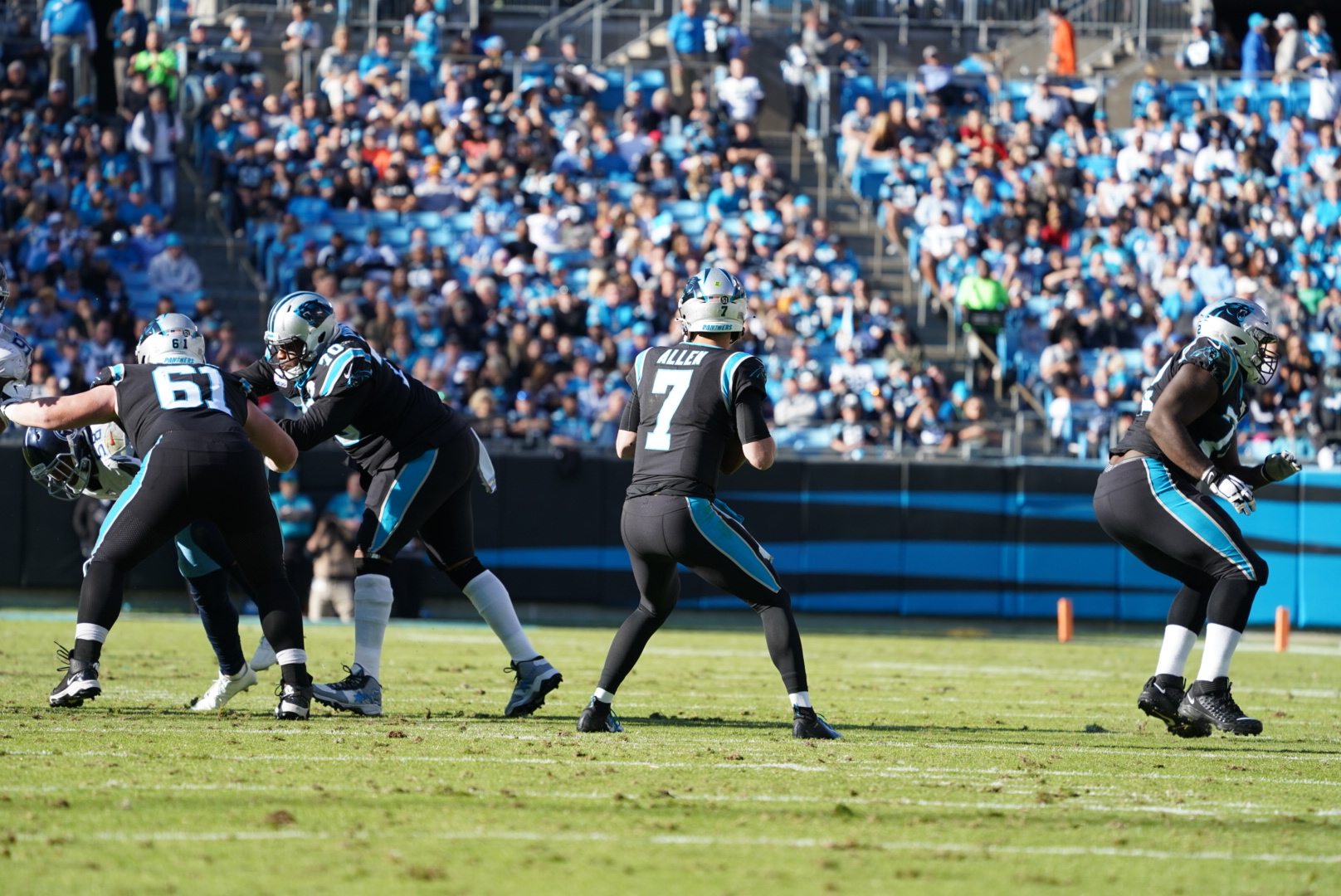 After starting the game perhaps wobbly, Allen settled down in the second quarter – the touchdown pass to McCaffrey began a string of nine consecutive completions for the Panthers quarterback, who had previously thrown four interceptions since his last touchdown. But once he got one, he went right back to the well, leading a 12-play, 90-yard drive that ended with a 12-yard touchdown pass to a leaping Curtis Samuel – the drive featured completions to four different receivers and two third-down conversions.

All told, the Panthers converted four of nine third-down chances. The Titans did not convert a third down in the first half.

After beginning the game 4-of-13 for 72 yards and an interception, Allen finished the first half with the nine straight completions for 97 yards and two scores and the Panthers would lead 17-0 – Allen would throw for 232 yards in the game. The final Titans drive of the half – which went 37 yards in eight plays – was snuffed out when Marquis Haynes secured the first sack of his career and pushed Tennessee out of field goal range. Ryan Succop’s second attempt of the day, this one from 56 yards out, was short – and the Panthers had shut out their opponent in the first half for the first time since Week 17 of last season. 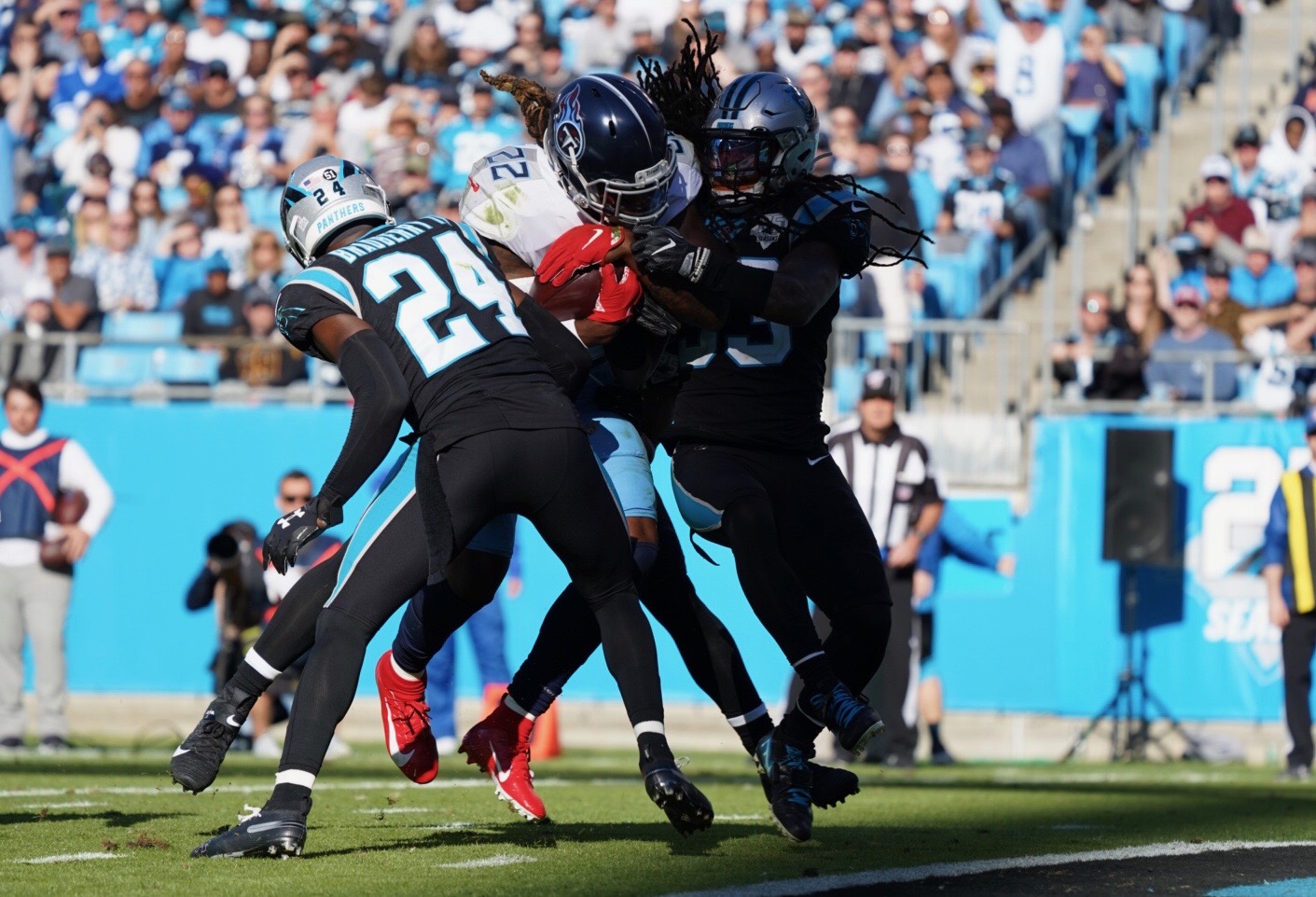 At the start of the third quarter, the Titans came out of the locker room and decided to remember Derrick Henry. After he ran the ball only two times for four yards in the first half, Henry was a force after halftime as he recorded 47 yards on seven carries on their opening drive of the half.

Tannehill’s 25-yard scramble out of the pocket that put the Titans in the red zone was the only play that didn’t touch Henry’s hands on the entire drive. On a 1st-and-10 on the Panthers 15-yard line, Henry refused to go down as he carried defenders down to the eight-yard line. A play later, Henry finally got the Titans on the board with a touchdown.

After only 114 total yards in the first half, the Titans had 72 on that drive to pull within 10 points.

That’s Why He’s The Captain

Fake punts are fun. They matter – they certainly matter when the Titans have just run the ball down the Panthers’ throat and scored a touchdown to open the half and then forced a three-and-out on the Panthers initial possession of the second half; but Riverboat Ron dialed up the direct snap to special teams captain Colin Jones, who dragged linebacker David Long, Jr. to the first down markers.

Four Christian McCaffrey runs and a Titans offsides penalty later, Kyle Allen would again dial up the deep ball – he attempted multiple deep balls throughout the afternoon – and this time, DJ Moore would pull it in after double-clutching it near the left sidelines. Moore tipped the ball to himself as the ball floated over a leaping Logan Ryan – after being called incomplete initially, Moore lobbied successfully for a completion call as the wide receiver pointed out to the referees where his feet had come down inbounds with the ball in his hands.

The referees relented and the Panthers had a first-and-goal at the one-yard line. 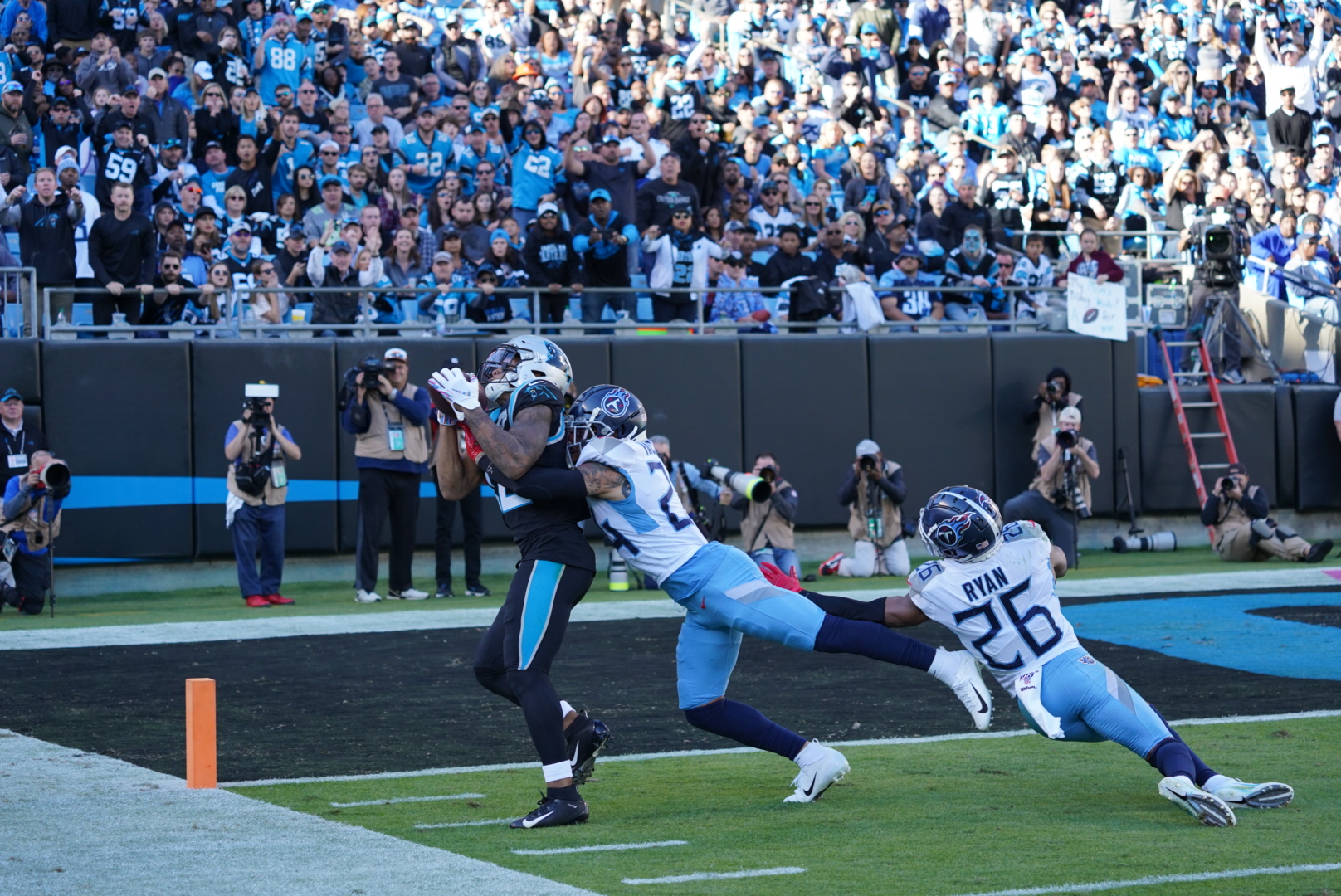 One play later, Christian McCaffrey would plunge over left guard for his second touchdown of the day and the Panthers would lead 24-7.

There Goes That Man 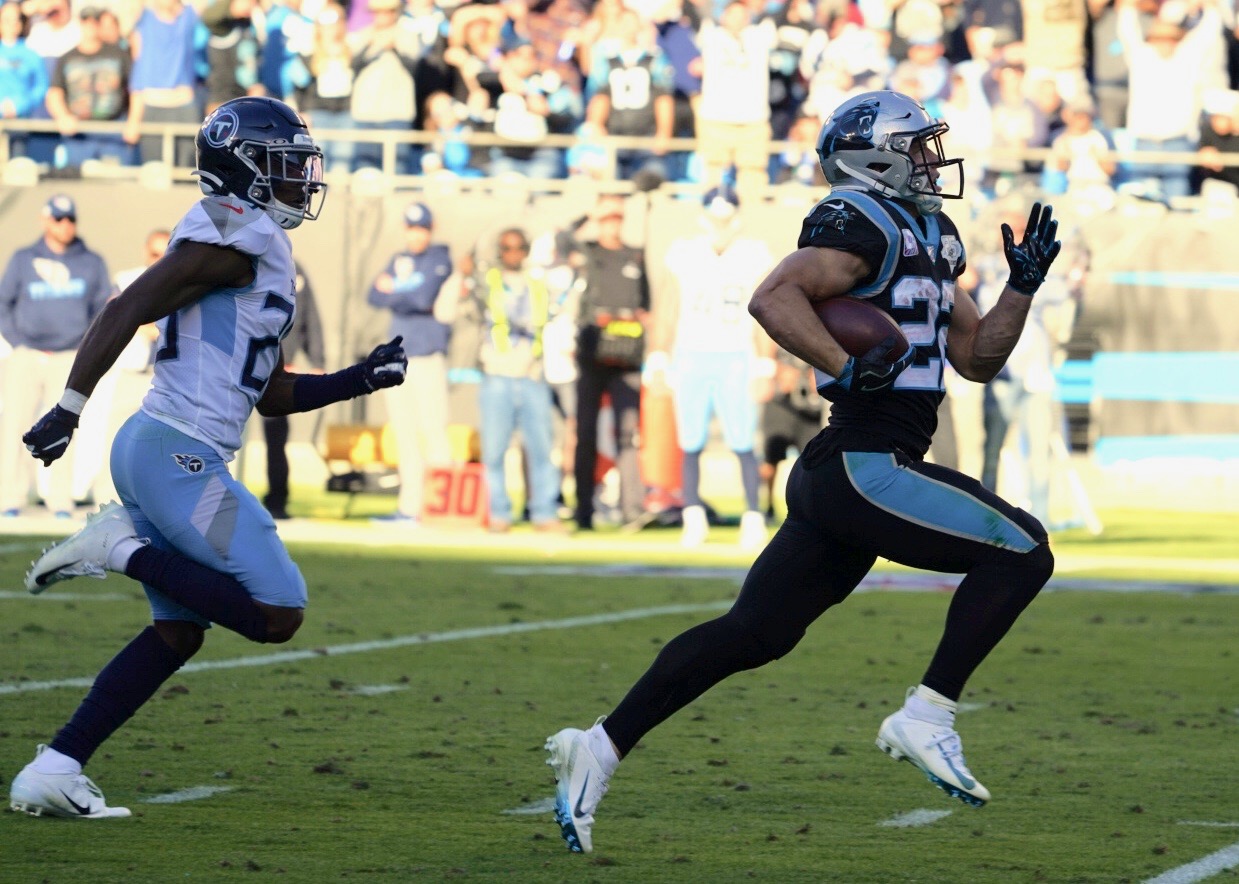 Christian McCaffrey already has four rushes this year of 37 yards or more, and after Derrick Henry rumbled a screen pass into the end zone for his second score of the day, McCaffrey added to his total with a 58-yard rush right up the middle to put the nail in the coffin of the Panthers’ fifth win of the season.

McCaffrey became the third player in NFL history to have 150 scrimmage yards in six of the first eight games of a season, tying Jim Brown (1963) and Matt Forte (2011). McCaffrey also had the second-most total touchdowns of any player in the NFL entering the game – his three vaulted him ahead of Aaron Jones for the league lead as the Panthers’ offensive cornerstone would finish with 24 carries for 146 yards, three catches for 20 yards and the three touchdowns.

Although McCaffrey would be evaluated for a concussion and cleared to return, the 58-yard score was his final carry of the day as Reggie Bonnafon handled mop-up duty.