Eight Plays That Mattered In London 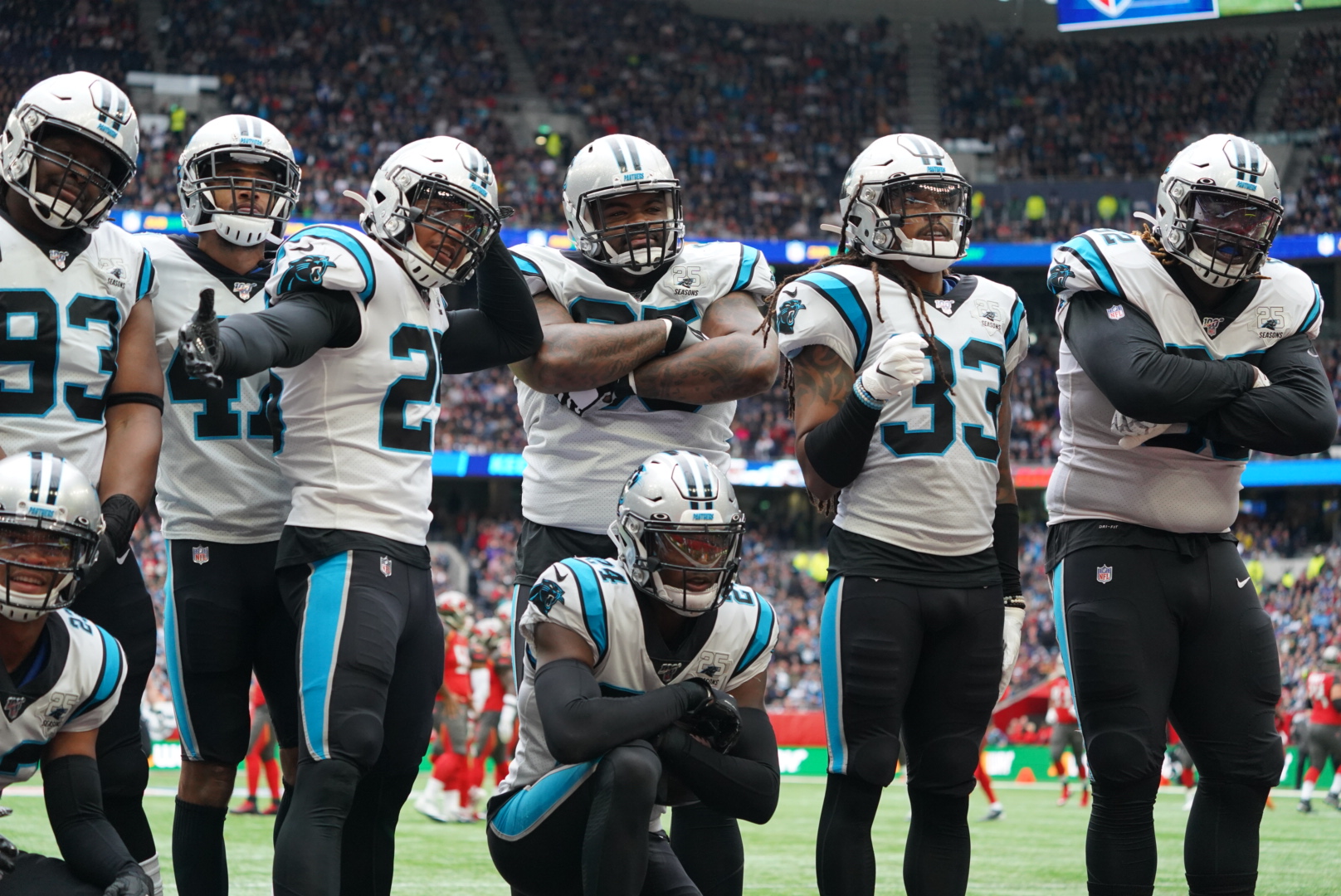 The Panthers went across the pond and came back in second place in the NFC South as they defeated the Tampa Bay Bucs 37-26 at Tottenham Hotspur Stadium in front of a vocally pro-Panthers crowd of over 60,000.

Kyle Allen threw for 227 yards and two scores, Christian McCaffrey made another meme-worthy play and the defense, well, the defense made Jameis Winston very, very sad.

Here were the plays that mattered. 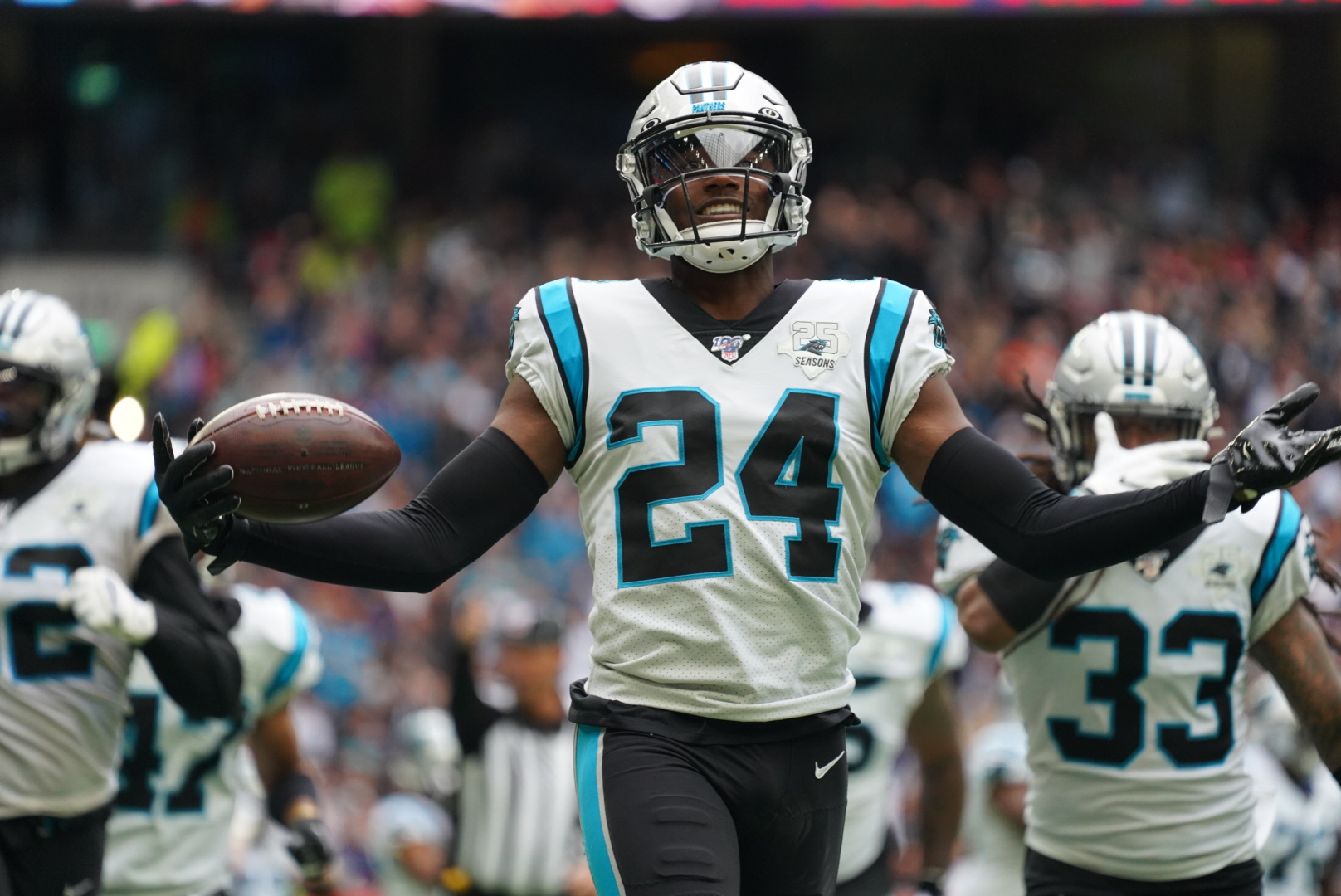 If it sounds incredibly cliche, it’s because it is.

The Panthers – particularly the defense – continually talks about how they want to start fast, how they want to pressure the quarterback and how they need to force turnovers to be successful. Sunday in London, they did all three as Mario Addison blasted his way through backup right tackle Josh Wells, forced an inaccurate throw, James Bradberry fought off Mike Evans to secure his second interception of the season on the very first play of the game.

With Luke Kuechly dropping into coverage and forcing the throw to be perhaps a little bit further to the left than Winston would have liked, Bradberry was able to haul it in to tie his career high in interceptions – for the moment – in just the sixth game of the season. The Bucs defense, sporting the second-lowest rush yardage allowed per game in the NFL, stiffened and held the Panthers to a 49-yard field goal by Joey Slye after three plays went -2 yards, but the Panthers already had their fast start.

The Bucs were able to contain Christian McCaffrey, who came into the game leading the NFL in rushing yards, to only 31 yards on 22 carries.

After a Bradley Pinion punt backed the Panthers up on their own one-yard line and the crowd noise beginning to swell – Greg Van Roten said this week that they used noise during their practices because they’d heard the crowds in London screamed when either team was backed up in their own end zone – the Panthers used a couple of runs to give themselves some space before facing a third-and-4 inside their own ten. On their previous drive, Kyle Allen had found an open DJ Moore crossing the field but the Panthers wide receiver dropped a catchable ball – this time, he made no such mistake. Moore corralled it in tight coverage for a first down and the Panthers drove the length of the field – only the fourth 99-yard drive in franchise history – and scored to go up 10-0.

Kyle Allen was 5-for-5 on the drive for 65 yards, but after that play, most targets were wide open on the drive. Greg Olsen corralled a 16-yarder on the right side, Curtis Samuel was open for 21 more and DJ Moore put Vernon Hargreaves on skates – remember that phrase – for a 23-yarder to get them into the red zone.

After advancing to the one-yard line, the Panthers found themselves in a familiar situation – close to the end zone but not quite in against the Bucs – but this time, instead of a trick play, they took the more familiar route. After a Kyle Allen QB sneak was stuffed on third down, they gave the ball to Christian McCaffrey on fourth down, and the man who was drawing MVP chants later in the first half would convert the touchdown to put the Panthers up 10-0.

Panthers punt returner Ray-Ray McCloud has been flirting with both incredible success and disaster – multiple returns have looked inches from being broken for scores and he’d already fumbled twice this season, both times against the Bucs in Week 2 – but this time, the big play went against the Panthers. McCloud lost the ball after a ten-yard return and it was recovered by Kevin Minter.

Three plays later, thanks to a beautifully executed screen pass to OJ Howard that went for 30 yards, the Bucs cut the lead to 10-7. 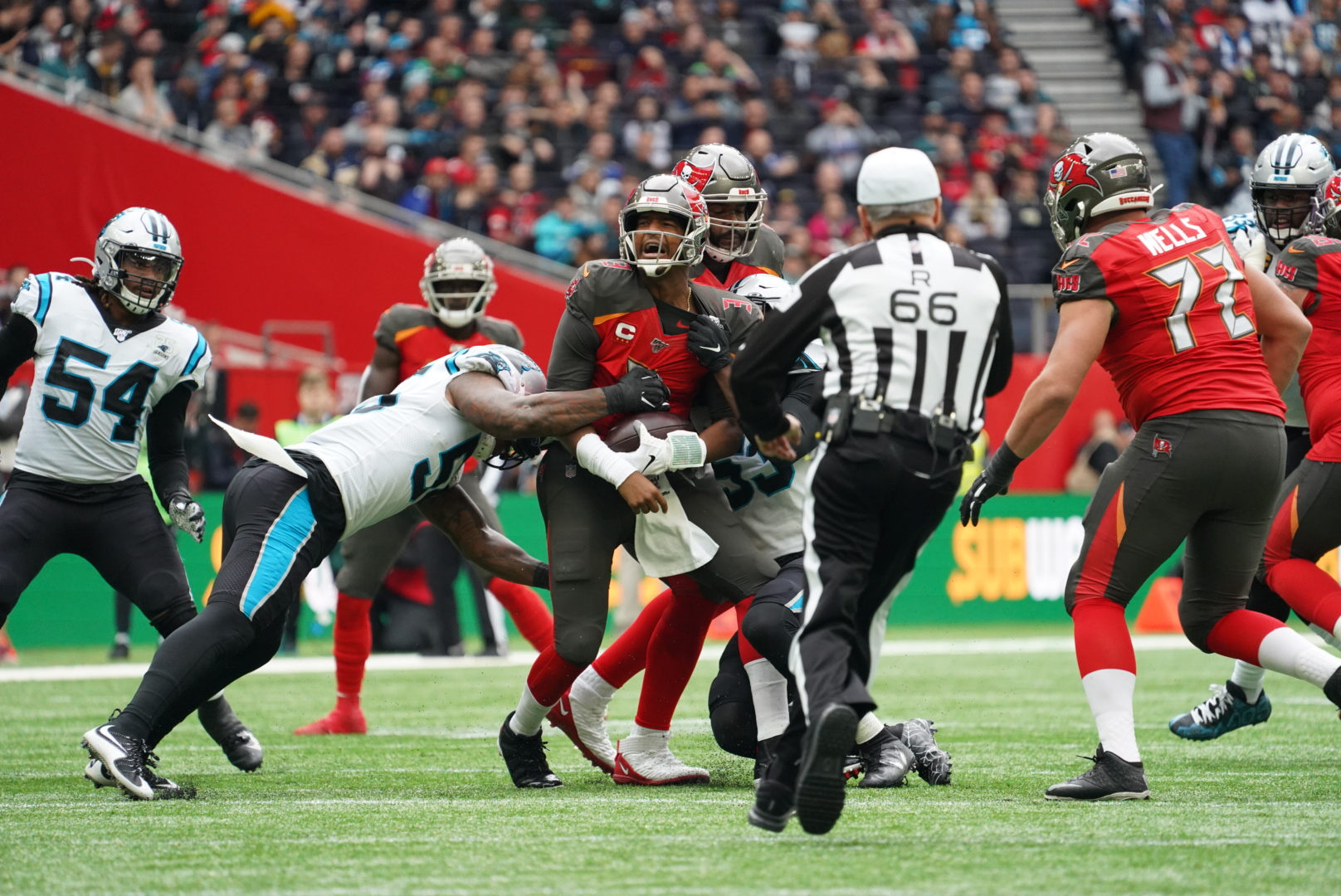 The Panthers’ pass rush have been on a tear to start the season – their 20 through five games is the Panthers’ most since 1996 – and they weren’t slowed down in the first half as the Bucs’ patchwork offensive line, specifically the right side where both Alex Cappa and Demar Dotson were out with injuries, wasn’t able to contain the rush. They harassed Winston constantly, tying a franchise record for most sacks in a half with six, and when they weren’t brining Winston down, they were causing so much pressure – as Bruce Irvin did coming around the left side of the line – to visibly affect passes and force him into mistakes like the floater that Javien Elliott was able to pull down for the Panthers’ second turnover of the day.

The pressure came after Irvin and McCoy had combined for a sack a play earlier – and it wouldn’t stop there. 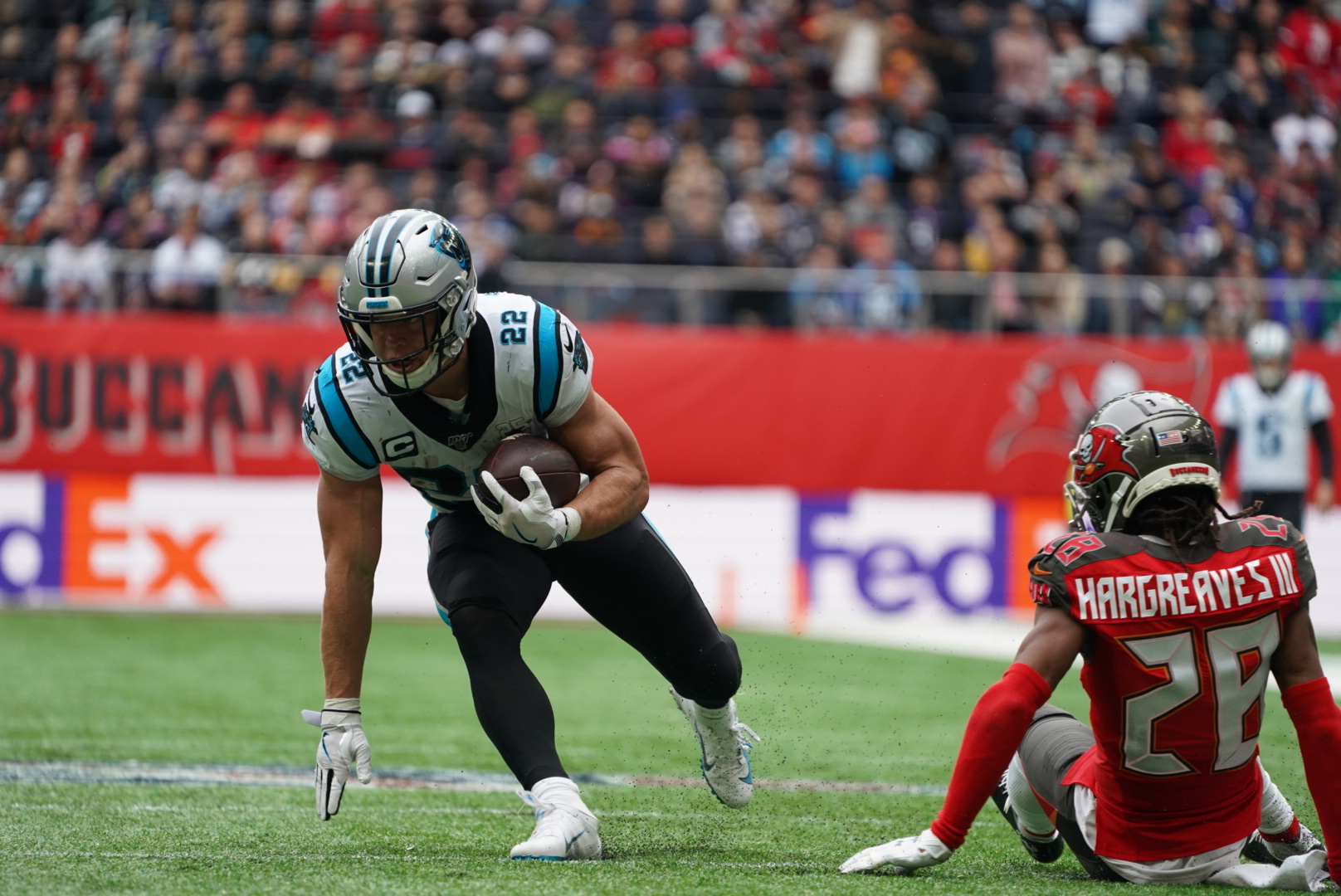 In Week 2, Vernon Hargreaves played the final play perfectly and stopped Christian McCaffrey a half-yard short of the first down that they needed on what turned out to be the pivotal play of the game.

Four weeks later and on another continent, Christian McCaffrey got his revenge. 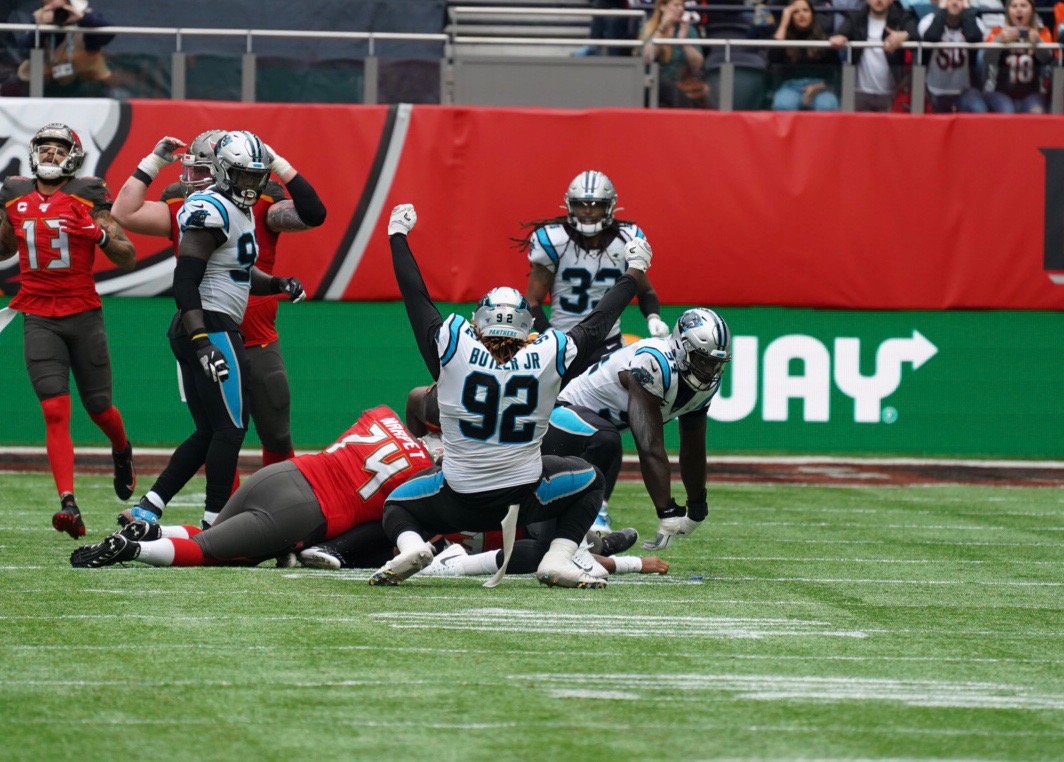 With Kawann Short having surgery to repair a partially torn rotator cuff and out for the rest of the season, Eric Washington has said multiple times in the past three weeks that he expected multiple players to step up in Short’s absence – and while that certainly happened as the Panthers defensive tackles accounted for 4.5 of their six sacks in the first half, perhaps none exemplified the pressure the Panthers put on Winston than the back-to-back forced fumbles/strip-sacks by Vernon Butler.

Butler, who had two sacks and zero forced fumbles in the first three seasons of his career, had a huge forced fumble in Houston to salt away the game and followed it up two weeks later by knocking the ball out of Winston’s hands on consecutive plays as the Bucs threatened to score just before halftime; the Panthers forced Winston out of the pocket and Butler made the play. While the first wasn’t recovered, the second was – and the Panthers went into halftime up by two scores.

The Panthers finished with seven sacks in the game – including 2.5 for Gerald McCoy against his former team. 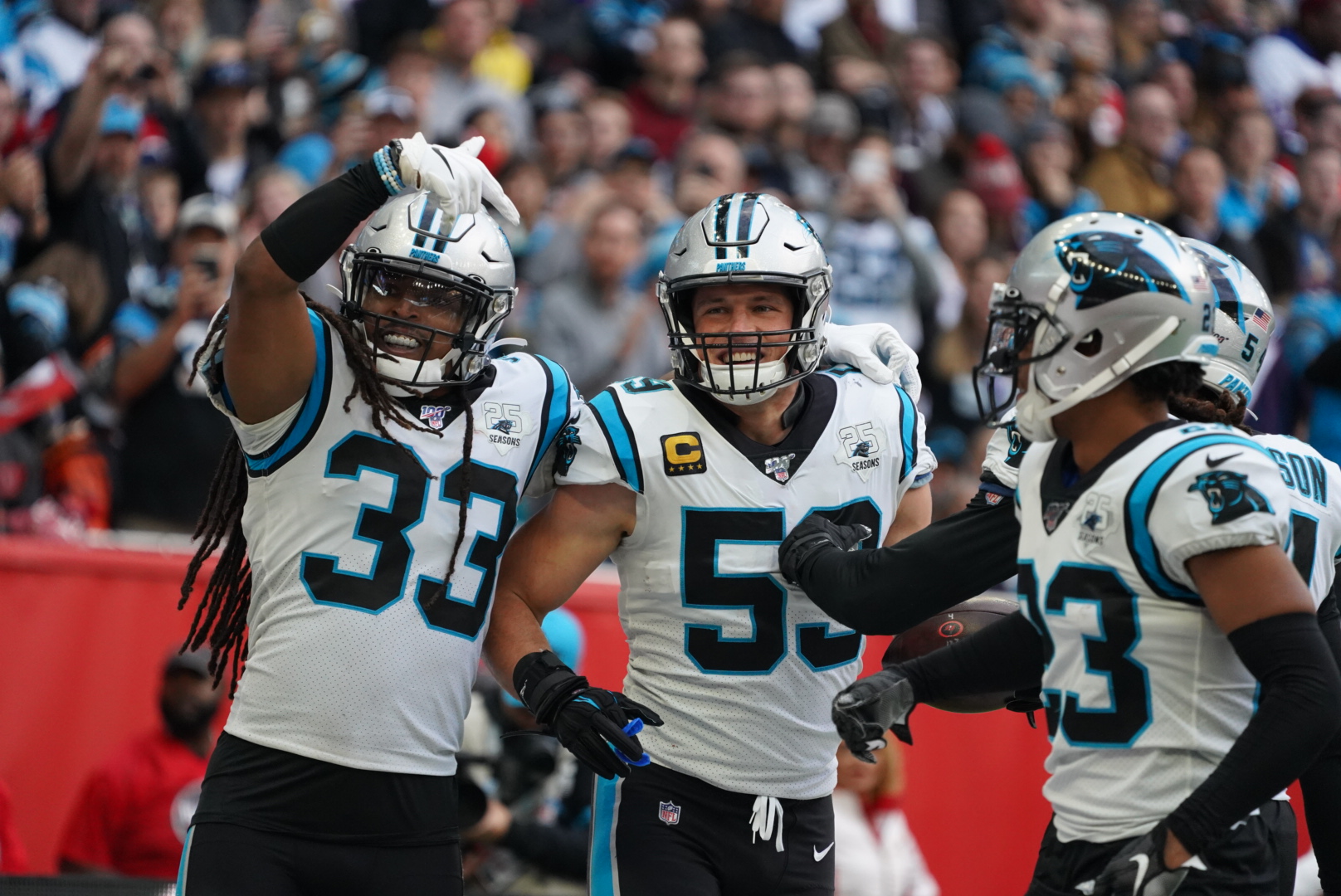 Eventually, constant pressure forces mistakes by quarterbacks and that’s exactly what happened in the third quarter as Eric Reid, Efe Obada and Marquis Haynes converged around him and, desperate to get rid of the ball, didn’t see Luke Kuechly over the middle of the field and hit the NFL’s leader in total tackles between the five and the nine.

Kuechly returned his first interception of the season inside the Bucs’ ten-yard line and Curtis Samuel took the ball into the end zone for his second touchdown of the season. Samuel would cap off the Panthers next drive with his third with an absolutely gorgeous catch in the front corner of the end zone with a defender draped all over him.

Samuel finished with four catches for 70 yards and the score through the air, and his only rush from – from the eight – went for a touchdown. 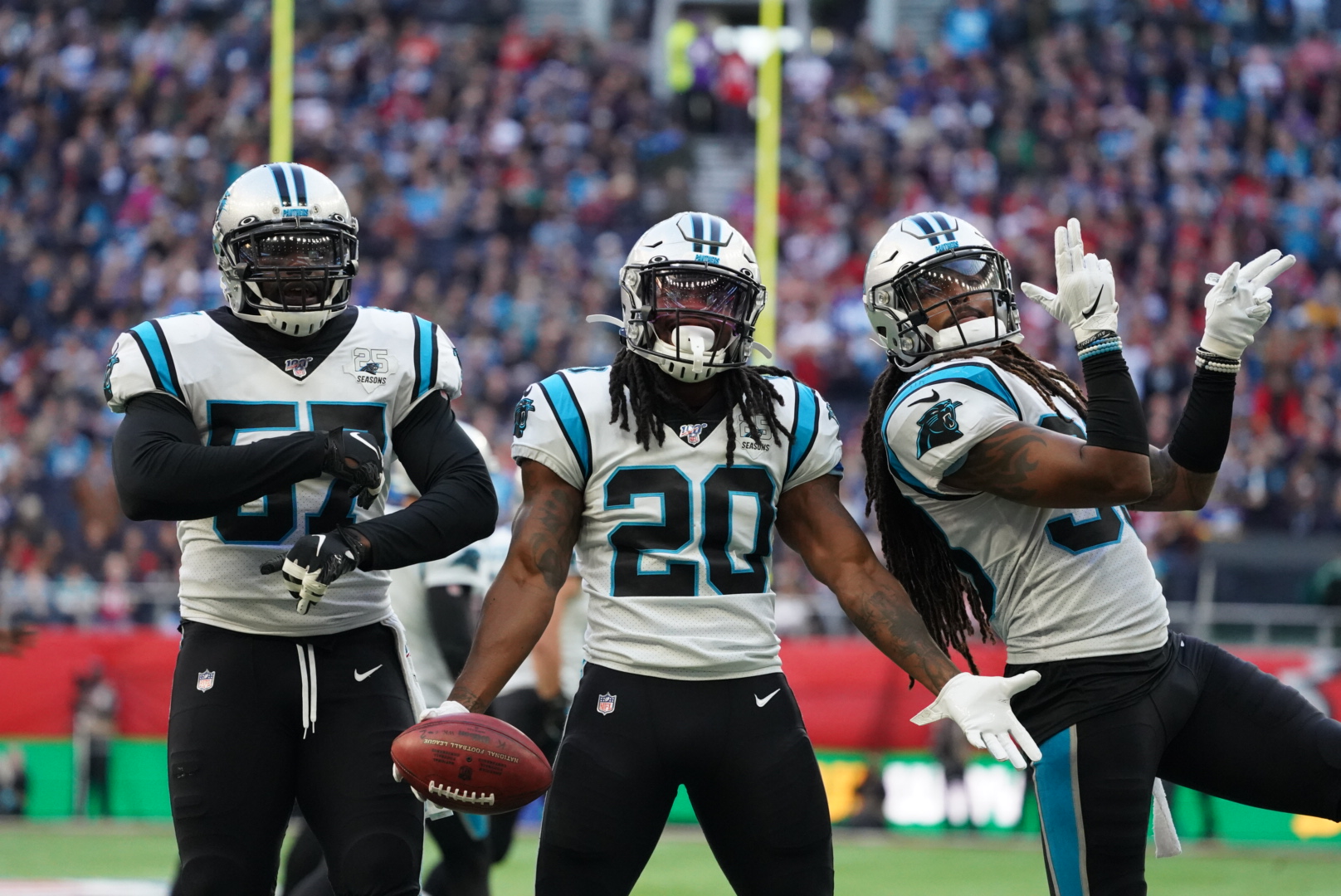 Despite being outgained by the Bucs, the Panthers still won by two scores – because they handily won the turnover battle.

Jameis Winston was responsible for six of them himself – five interceptions and a lost fumble and the Panthers added one on special teams as Bobo Wilson muffed a punt and backup running back Jordan Scarlett, who hasn’t taken an offensive snap yet this season, recovered it. The Panthers were able to turn this into three points even as the Bucs offense chugged along – they had back-to-back 75-yard drives that resulted in touchdowns and two-point conversions sandwiching the muffed punt – but ultimately, the turnovers continued to haunt them for their final two drives.