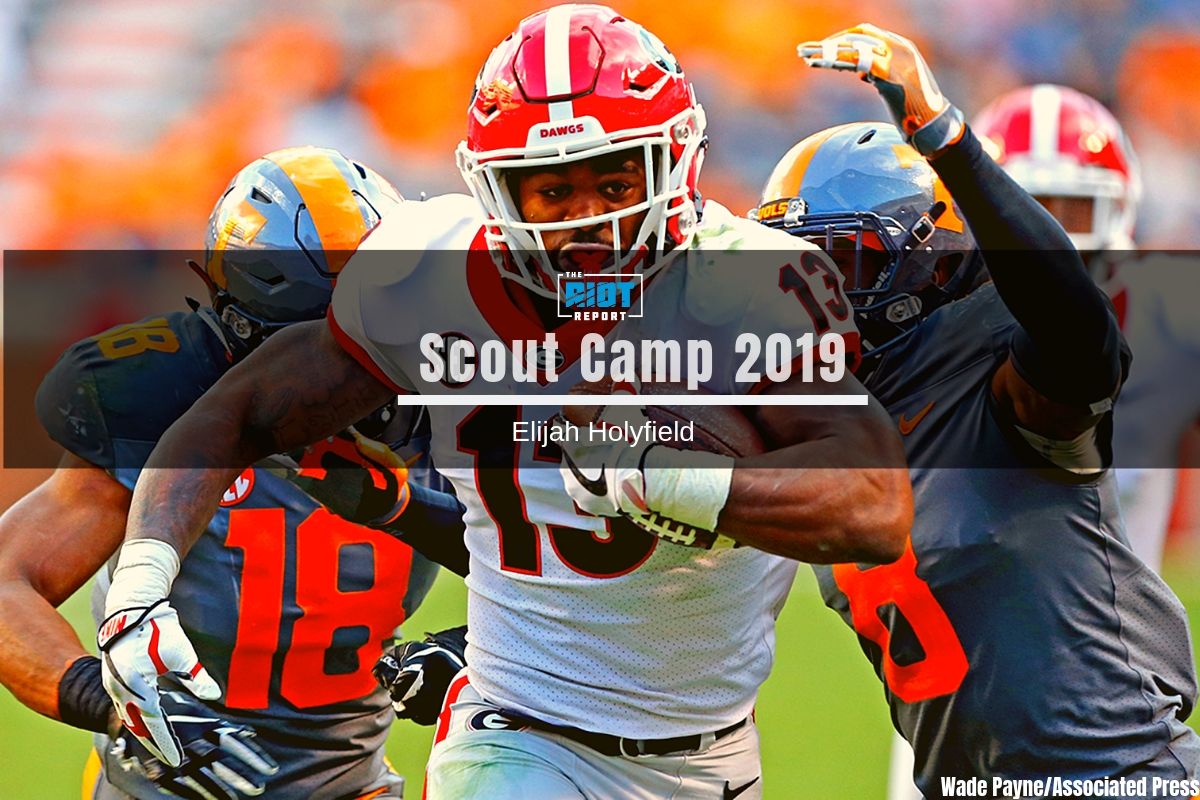 There is no doubt who the primary running back is the for the Carolina Panthers – while Christian McCaffrey will likely be relied upon for another 300-plus touches again in 2019, the Panthers also seem to be aware that they can’t afford to be as reliant on him as they were in 2018; with this in mind, they looked to add some young running back options this offseason, and while their fifth round draft pick Jordan Scarlett has already been covered in some detail here, they also made a significant priority of addressing the position after the draft, signing Elijah Holyfield out of Georgia.

With Cameron Artis-Payne being the only returning running back other than McCaffrey – and even he is only back on a one-year deal – it should be expected that the competition for the spots behind McCaffrey will be a fairly open one. While Holyfield might not start training camp as a presumed roster spot, he will certainly have a real chance to earn one.

So, with that in mind, what does Holyfield offer the Panthers and how might that fit in with the other running backs they have on the roster?

“I know he didn’t run a good 40-time, but when you put the tape on him, that’s really what we judged him on was his body of work – and it was pretty impressive.”

When you rush for over 1,000 yards at 6.4 yards per carry with seven touchdowns in the SEC, you usually would expect to get drafted relatively high, especially when you measure in at a very NFL-like 5-10 and 217 pounds. However, while he was seen as a mid-round or even late day two prospect for much of the early draft process, a terrible 40 time at the scouting combine is likely the main reason why the Panthers were able to get Holyfield even close to where they did.

While it is certainly true that Holyfield isn’t going to be breaking off many 80 yard rushes, his short and medium area quickness on tape are far more impressive than his admittedly very slow 40 time would suggest. When given a chance to break it to the edge in college, he showed not just the initial quickness to get outside the defender but also the medium area speed to get a reasonable distance into the second level before being brought down:

Yes, NFL defenders will be faster than most college defenders, but the players that Holyfield is going up against here are all going to have a real shot to play on Sundays; while he’s not going to run away from anybody, he does show enough speed to punish teams with the occasional chunk play. Is he a great athlete? No, but he’s good enough to play in the NFL, and when that isn’t the core of your game, that should be enough.

So What Does He Do Well?

Well, for a start, he does a really good job of making the most out of what is blocked for him from a vision point of view. He shows the ability to recognize pressure in his initial gap early enough to bounce the run outside or inside while being able to carry sufficient momentum through to not get trapped behind the line:

And when teams collapse inside to try and stuff the run, he is able to recognize this early and make use of the space created outside, again carrying enough speed through his cut and cutting early enough to give him an angle to the edge:

And on outside zone runs, he showed the ability to recognize when teams overcommitted to the outside – allowing him to cut the ball back for a decent gain:

The other thing he does really well, something which is not something that many college running backs show the ability to do, is to manipulate defenders and exploit breakdowns in gap discipline as they happen. On both of the following plays, Holyfield is initially going for an open inside gap, but is able to recognize the defender in the gap outside breaking the structure of the defense and trying to get to the inside gap.

This allows Holyfield to make a slight jump cut into the vacated gap for a solid gain:

This ability to manipulate gaps shows up in other ways, such as on the following play – when gaps didn’t open up, he was able to use a hesitation to try and freeze defenders, thereby giving him a momentum advantage and making it easier for him to churn his legs through the contact and pick up additional yards:

This brings us to the other thing that Holyfield does really well – picking up yards after contact. First of all, he shows excellent contact balance, allowing him to bounce off tacklers who aren’t quite able to square him up and who don’t wrap up properly:

And even when tacklers were able to get hold of him, he regularly showed the ability to keep his legs churning through contact to add yardage to what most running backs are able to gain from a situation:

Oh, and if you try and line him up, you better be willing to match his level of physicality:

While it might not be Steve Smith face-palming people into the ground, he also has a decent stiff arm which he is able to use to eke out extra yards as well:

In short, if you’re going to try and tackle Holyfield, you had better line him up, hit him hard and wrap up. He doesn’t have quite the raw power of a Jonathan Stewart or a Mike Tolbert, but he is still able to consistently add yardage after contact with his ability to break arm tackles – also allowing for some chunk plays here and there.

The final thing that Holyfield does well as a runner, and something that is really quite surprising for a player of his size, is his ability to change direction. This comes in handy in a number of ways, allowing him to work around early penetration without a significant loss of momentum:

And also giving him a promising jump cut:

With the ability to make a defender miss in space that most power running backs don’t have:

There’s always a risk in the NFL that by doing two things quite well you don’t quite get the benefit of either, and it is certainly true that specialists are often more reliably able to translate their game to the next level, but Holyfield does certainly offer an intriguing combination as a runner with both good power and agility – he is able to run over smaller defenders and run around bigger ones. While he likely won’t have quite as much luck against bigger and faster NFL defenders, his above-average vision should allow him to have enough success before contact that his power and agility add value to his game rather than being the core of it.

Up Next: Emulating CMC