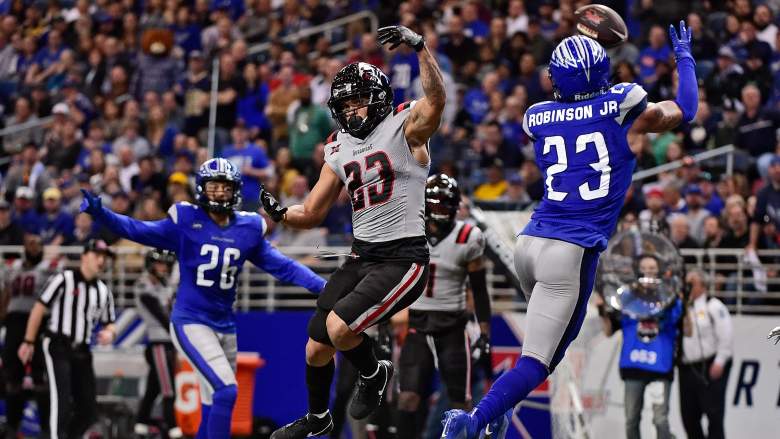 Having already drafted fellow safety Jeremy Chinn in the second round, signed safety Juston Burris in free agency and resigned Tre Boston to a new contract, the Panthers went back to the safety well in the fifth round, drafting West Virginia and XFL safety Kenny Robinson in the 152nd pick of the NFL Draft.

It should not be a huge surprise that the expectation for Robinson is likely that he will be asked to play mostly on special teams while developing behind those already mentioned, with a view to him competing for a starting role in a year or two and providing depth in the short term. However, while the expectation isn’t that he’ll start right away, it’s worth taking a moment to consider the traits that made him a success in the XFL and why he might have been a project worth investing in during the middle rounds of Matt Rhule’s first draft for the Panthers.

Robinson didn’t take part in the Combine, and so it is hard to get an exact idea of just how fast he is, but on tape, he shows the ability to run vertically with receivers (Robinson wore #2 in college):

And while he didn’t play a lot of man coverage in the slot, either in the XFL or at West Virginia, he did occasionally flash the movement skills to cover receivers in the slot in man coverage, even if his footwork in this regard is in need of further development (and 23 in the XFL):

Where this speed and movement skills are also valuable is in deep zone coverage, with the ability to cover the outside corners in the red zone:

As well as having the range to drop out into deep zone coverages after lining up around the box, something that could be especially valuable in a Phil Snow defense that, while he was at Baylor, looked to drop safeties into deep coverage on a consistent basis from similar starting points:

While he didn’t play a huge amount of underneath zone either, he showed reasonably good movement skills underneath, though as with man coverage, this is an area where he could do with tightening up his footwork in order to improve his balance and control in coverage:

Where his real value lies, however, is in his deep coverage – with his potential range, he has a chance to play the middle of the field in either a Cover 1 or Cover 3 scheme. To do this to a high level, he will need not only the range to cover the ground, but also the instincts and the ball skills to be able to allow him to get in the right positions and then capitalize on them. While not every play he played on defense ended this way, he did show a nice ability to read the game from deep coverage and he certainly has the ball skills to be a factor on the back end:

The one slight concern with his reading of the game in deep zone is that he did sometimes appear to get fixated on what was in front of him and allow a receiver to get open over the top of him – sometimes with pretty disastrous consequences:

Finally, as something of an added bonus, he also showed some ability to make an impact as a blitzer against the pass on odd occasions:

There is certainly an awful lot to be optimistic about in Robinson’s coverage, especially in deep zone, and while he will need some further development, he has the raw skills to cover ground in deep zone or play man-to-man underneath, as well as the instincts and ball skills to be a significant impact player on the back end, even if he could do with tightening up his footwork underneath.

What is also worth noting is that he has played in a similar way to how the Panthers might be looking to play under Phil Snow, being able to drop into deep zone from a central safety spot but with the ability to also drop down into either underneath man or zone. There is certainly some work to be done, but this is not a skillset you see a huge amount in day three safeties.