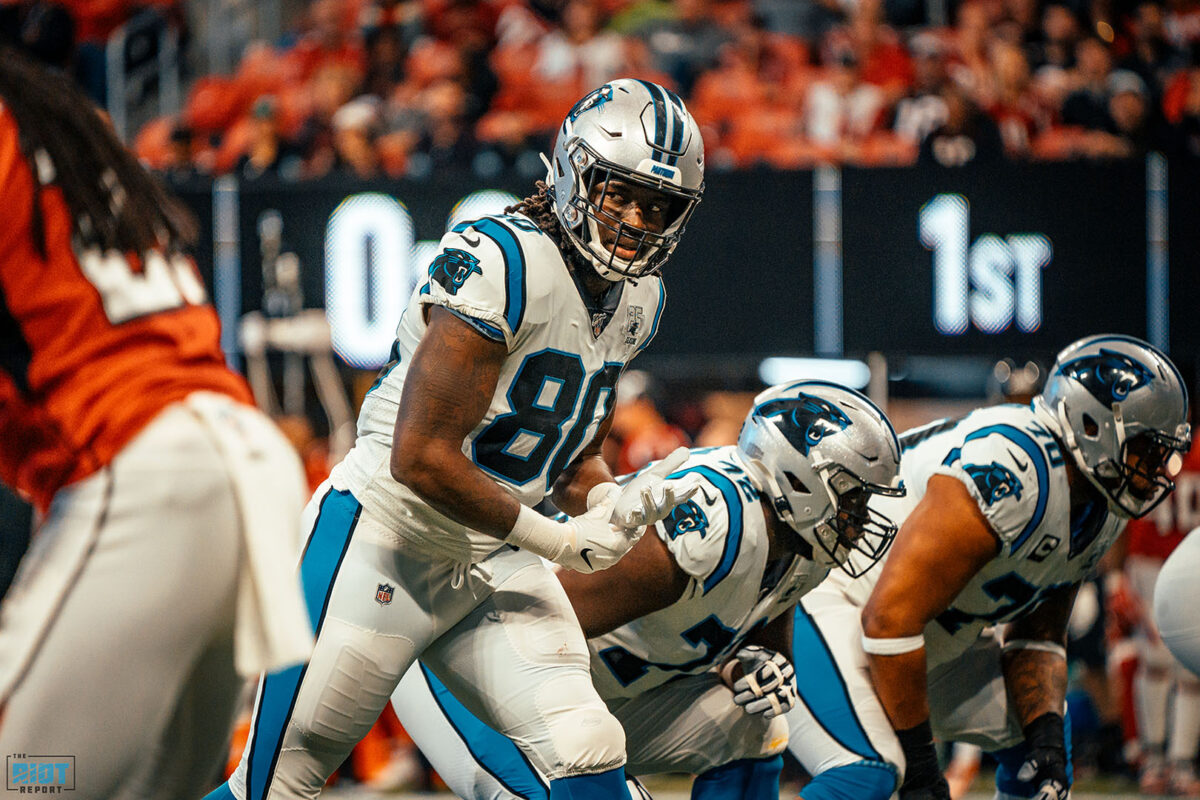 If you had said before the season started that, having been healthy throughout, Ian Thomas would have no receptions on three targets through ten games, most people probably wouldn’t have believed you.

Even now, it’s hard to understand why Ian Thomas has seen the field so little so far this season, but with Greg Olsen in the concussion protocol for the last game-and-a-half, Ian Thomas has had a chance to get some more playing time, and having now seen what the 2020 version of Ian Thomas is like, it’s even harder to explain his near-complete absence. Of course, there are things that Thomas needs to work on as well, so what exactly did he do well, and what did he do less well, in his first full-time action against the Falcons?

One of the real difficulties with assessing Thomas when he was at Indiana based on his tape alone was the way that he was used – he wasn’t really asked to separate as a route runner and instead just ran a lot of routes that looked to get him open just with his athleticism, most notably an awful lot of drags, and that was also a significant part of how he was used on Sunday (Thomas is #80):

Using him in this way makes a lot of sense, as even at the NFL level, he is still a really good athlete and this is an easy way to get him the ball in space and allow him to add yards after the catch without asking him to necessarily win as a route runner. Another similar usage is to have him try and win vertically – this was also a major part of how he was used on Sunday:

And to get the elephant out of the room….yes, he really should have caught this ball:

While the drop is something that he will feel understandably frustrated about, the encouraging thing here is that he was able to create a step vertically – this is something the Panthers and Thomas can certainly look to build upon. Of course, athleticism can only get you so far in the NFL unless you’re Randy Moss, but there were also some really nice instances of route running Sunday, and this was probably the most encouraging thing about Thomas’s game on Sunday.

First, he showed the ability to use his speed vertically to eat into the cushion before breaking outside:

And also used his size advantage to, ahem, his advantage, by initiating contact at the head of the route and using that to create momentary separation:

But the nicest instance was actually on his biggest play of the day, where he initially looks to run on the inside shoulder of the defender before breaking vertically, followed immediately by a break outside, the combination of which left the defender flailing in his wake:

This is not just a nice change in direction, but also an awareness of how to set up defenders in order to create maximum separation after the break point.

However, having set that high standard, there were also some instances where he can continue to improve. The first of these can on a similar outside-breaking route – while here it was harder for him to force the defender inside due to the safety help over the top, he could have done a better job of keeping his body angled inside earlier on in the route in order to give himself more space to break to the outside:

This is far from a bad route, it just could have been better. Similarly here, lined up outside, he needs to make a bigger threat out of the initial part of the route, as while his break back to the ball is decent, he never really forced the linebacker to chase the route vertically and so, when he broke back, it wasn’t that difficult for the linebacker to break back with him:

Finally, and in a similar way to the first route, he makes a decent break outside, but could have done a better job of really threatening the inside – the defender wasn’t forced to full turn inside before Thomas broke outside:

Again, these are far from harsh criticisms, none of these plays is Thomas being actively bad, but if he can make these improvements, he has a chance to not just be a good tight end, but a legitimate nightmare for teams to cover man-to-man, something that really elevates the value of any player.

Having said all this, there were also some chances at big plays for Thomas where the ball either went elsewhere or where Allen pulled the ball down before the play was able to really develop:

And while you can’t really fault Allen for just tucking the ball and making sure he converted on third down, if he had made the pass to the open Thomas, he could have been running for a while:

Oh, and he did make a nice adjustment for the touchdown:

Ian Thomas has always flashed potential since he arrived in Carolina, especially as a receiver, and there was real surprise when he didn’t get more playing time early on in the season, but he showed on Sunday that not only is that talent more than just superficial, but that he is continuing to develop as a route runner – if that continues, he has a chance to be really, really good.

Of course, there is a reason why Ian Thomas is described as a tight end and not a wide receiver; a large part of that is the way he is asked to contribute as a blocker in both the running game and the passing game, and while he wasn’t asked to pass protect a ton on Sunday, and the Panthers didn’t run the ball a ton, there were also some things of note in this regard as well.

Up Next: How Does Thomas Block?