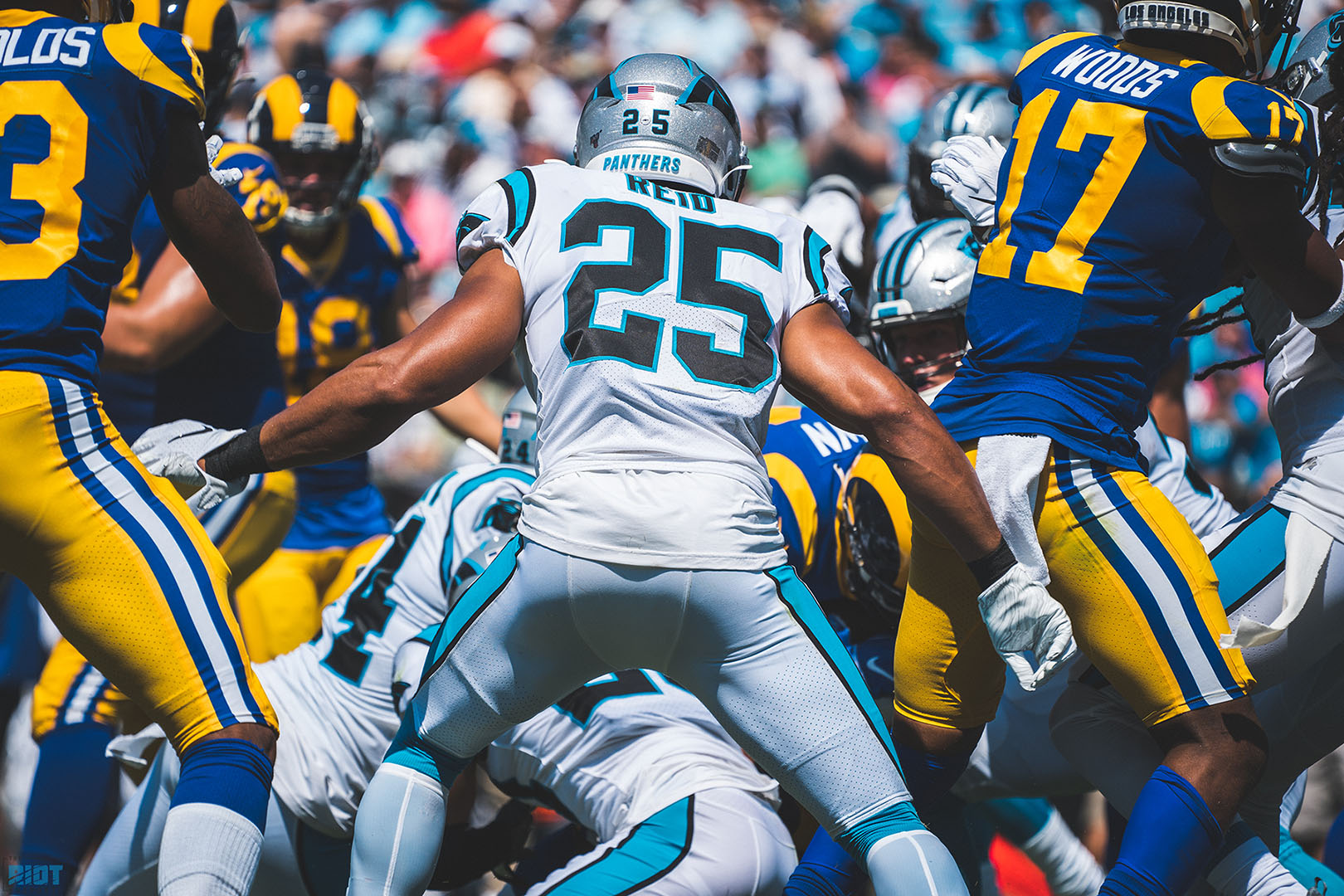 Every season, every team looks a little different from a scheme point of view on both offense and defense as coaches adjust to changes in personnel or simply come up with some new ideas over the offseason.

For the Panthers’ 2019 defense, the latest wrinkle is the use of a six defensive back formation on third downs, typically with three down linemen and two linebackers making up the remaining five spots. This was something the Panthers used extensively in the first half especially during Week 1, and in particular on third downs. While the amount this formation gets used is likely to vary significantly week-to-week – the Rams use a lot of three and four-wide receiver sets, so it was sensibly employed on Sunday – it is something that merits further inspection. So, how did the Panthers use this grouping, and how did it work?

To answer that, I took a look at how the Panthers used this formation to mixed effect on third down in the first half against the Rams.

When you have six defensive backs on the field, it’s usually not because you plan to use them as pass rushers, and in fact the Panthers didn’t use any of their defensive backs in this way from this grouping – but on a couple of occasions, they did look to rush the other five defenders and drop just the six defensive backs into coverage. Interestingly, on neither occasion did the Rams respond by keeping a back in to pass protect, instead trusting their offensive line to block man-for-man and looked to capitalize on the fact that the Panthers were left with only one help defender in coverage. The first time they did this, the first third down they had in the game, should teach the Panthers a valuable lesson about how not to use this grouping:

The issue here is that with both linebackers down at the line the Rams can be pretty sure they are not going to be able to help on the receiver screen, at least initially, so when Ross Cockrell shifts into the box the Rams have a 3-on-2 to the far side and make the simple play. The lesson here is that in short yardage situations, you really can’t give receivers this much space, although that applies to all personnel groupings.

The other time they tried this, they got a bit lucky as Cockrell appeared to try and pass the receiver off only to find nobody there – either that or he just forgot he was in man coverage – but Goff simply missed the throw.

The more generalized takeaway from this play is that the Panthers should be disappointed that they weren’t able to generate more pressure with a five man rush. This is one play, and it’s not worth trying to make more of this than it’s worth, but if you are going to rush five and play man coverage across the board, you need to get quick pressure – otherwise you are going to put a lot of pressure on your defensive backs. Whether the Panthers look to complicate their blitz looks out of this grouping is something that we’ll have to wait and see, but if the Panthers are only going to blitz classic box defenders from this formation, it might get quite predictable quite quickly.

Speaking after the game, Gerald McCoy seemed to think that this grouping actually made it harder for the Panthers to rush the passer, and a major reason for that may have been the number of times the Panthers dropped eight into coverage from this formation, meaning the Panthers had to get pressure with a three man rush. Three of the times they did this, the Panthers dropped into a cover three defense, clearly in an attempt to clog the underneath throwing lanes while taking away Goff’s ability to work the ball over the top. When they were able to get quick pressure with the three man rush, this coverage unsurprisingly worked very well, with the five underneath zone defender forcing him to hold the ball:

However, this is asking quite a lot of the Panthers defensive line, and if they unable to get consistently quick pressure, this tactic could end really quite poorly, as the only reason why the Rams didn’t pick up the first down on the following play was that Goff tried to force it to a covered defender from a pretty clean pocket.

The Panthers did also try playing some man coverage from this grouping with a three-man rush, but as with the drop back zone, this places a lot of pressure on the secondary to cover across the board if the rush isn’t able to get quick pressure.

This might have been a specific tactic to confuse Goff, and to be fair, if you are going to drop eight defenders into coverage, you might as well have as many defensive backs on the field as possible, but if the Panthers are going to consistently going to do this on third down, this formation is going to put a lot of pressure on their defensive line to consistently generate beat double teams, as better quarterbacks will be able to pick apart such coverages given sufficient time.

Finally, and this is particularly relevant if the Panthers keep looking to change into this formation on third downs, teams could well do what the Rams looked to do and go up-tempo on third downs to try and catch the Panthers with twelve men on the field as they try to change personnel:

This is something that the Panthers can use to their advantage, as if they are able to rush offenses into playing fast while also avoiding getting penalized, that would play into the hands of their new multiple defense with all of it’s different looks and permutations, they just need to make sure they aren’t caught by avoidable penalties.

The Panthers clearly used this grouping in combination with the three-man rush as a way of attacking the Rams by putting the ball in Goff’s hands at key moments and trusting that he wouldn’t be able to consistently make the right decision, but what will be interesting to watch both against the Bucs and for the rest of the season is whether there is a lot more to this grouping that will become clear as the season goes on, or whether this was something that they’ll keep in the playbook, but which was emphasized more against the Rams as part of a particular game plan.

We shall just have to wait and see.