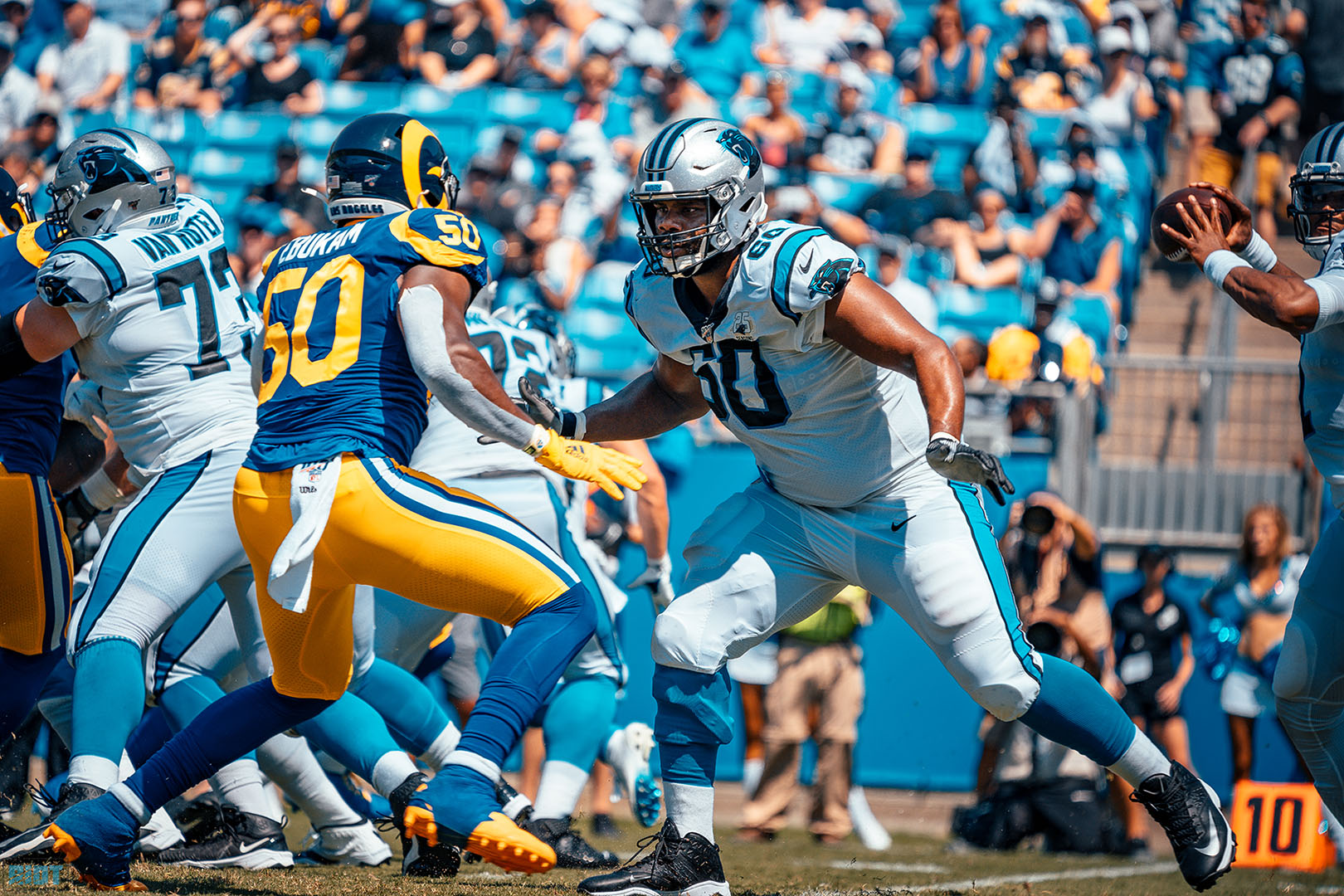 With the news that Cam Newton has re-aggravated his foot injury from the preseason, the Panthers are going to need to make a number of quite significant decisions, both about their quarterback and the Panthers’ season in general, in the coming weeks. First, the Panthers need to decide whether he plays this weekend, and then beyond that they will need to continue to re-evaluate when he comes back – based on both his health and the state of the Panthers’ season at that point in time. However, aside from decisions regarding Cam directly, the Panthers also need to make a number of decisions about their offense given the performance through two weeks, and no decision among that group is more significant than what they do at left tackle going forward.

Through two weeks, Daryl Williams has had a passable performance in a run-heavy game against the Rams, but was exposed repeatedly against the Buccaneers, especially as the game went on and the Panthers turned away from the run game. In past seasons, there has rarely been a decision to make at tackle, regardless of how poorly the starters have played, but this year, with rookie Greg Little back from his concussion, the Panthers actually have a legitimate option to turn to should they decide to move on from Williams. Of course, a major part of deciding what to do at this position will come down to evaluating what went wrong against the Bucs and whether that was one poor performance – as Ron Rivera appeared to suggest after the game – or whether it merely involved the Bucs defense exposing flaws in Williams that just aren’t going to go away.

So, is Daryl Williams a player the Panthers can go forward with, even if it involves a little help here and there, or is it time the Panthers moved on, regardless of whether he’s protecting Kyle Allen or Cam Newton?

The easy to digest, in one way at least, part of Williams’ performance against the Bucs was the three sacks he gave up. First, he got beat around the edge:

Then he got beaten outside after his punch failed to land:

And then he got straight bull-rushed:

Of course, everybody gets over-matched occasionally, even Joe Thomas gave up a sack occasionally, but what makes this harder to swallow is that all three sacks were by Shaq Barrett, a player who before Thursday had 15 career sacks in 62 career games and has two entire seasons where he failed to surmount his total from Thursday night. Williams didn’t just get beat repeatedly, he got beat repeatedly by a player who is far from the most accomplished pass rusher he will face this season if he continues as the Panthers’ left tackle.

However, this brings us back to the original question – was this the result of three isolated mistakes, or was this merely the culmination of a game of struggles?

It All Starts With The Feet

At a pretty fundamental level, most NFL tackles are limited by their foot speed, with technique being able to get them to the point where they work great until they just can’t cover around the edge. For Williams, there are clear limitations regarding his foot speed, on the following play, it is worth noting the direction his legs move off the snap (his back leg is going back and forward rather than opening his hips and trying to cover the edge rusher with lateral movement), and as soon as he squares himself up to the defender, he is unable to move laterally to stay in front of him:

The most direct knock-on consequence of this is that this front-to-back foot movement loads weight onto his back leg, with the front leg being used to generate the speed. This means that all of his momentum is going backward and in turn, this makes it hard for him to then drive forward or to counter when the defender adds even more force onto his back leg. What this means in practice is when Williams strikes mid-slide, he lacks the power necessary to drive the defender off his spin and so he is left to watch the defender run past him:

More staggeringly, on the following play, he gets completely turned around by the defenders’ punch as his back leg just can’t take the strain and the sack is only prevented by Van Roten, which in turn leaves Paradis to get completely flattened by Vita Vea on the play that appears to be the one where Cam reaggravates his foot:

This is something we’ll come back to later.

Up Next: Balance Issues & Help On The Outside