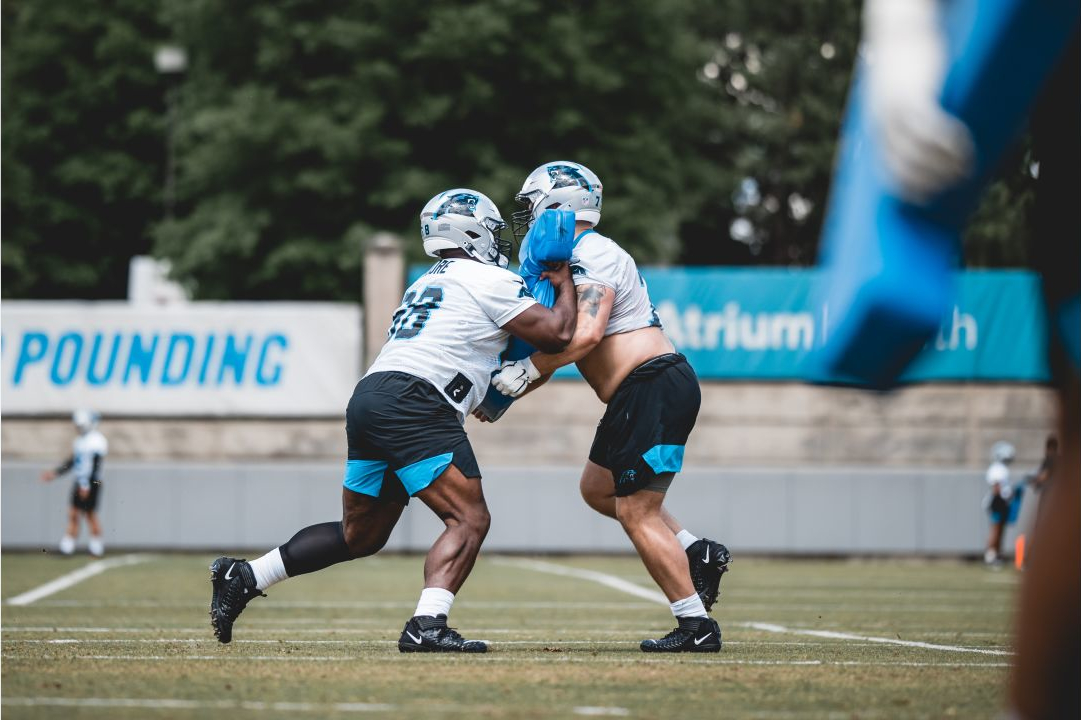 The Panthers have a history of finding value through undrafted free agency with the likes of Andrew Norwell and Corey Brown being key pieces in the success of the 2015 season. While there is a new regime in charge, if last season was any indication, then this is going to be an even more significant part of the Matt Rhule Panthers, with Rodney Smith, Sam Tecklenburg, Chris Orr, Sam Franklin, Myles Hartsfield and Joe Charlton all making the roster at points in the season.

The highlight of the Panthers’ 2021 UDFA class is former Grambling State offensive lineman David Moore, who many expected to be drafted after impressing onlookers (including the Panthers’ coaches) at the Senior Bowl. While there is always a long road between signing as a UDFA and making a 53-man roster come September, what skillset does David Moore possess that will work in his favor and where does he need to continue to improve at to give him the best shot?

We’ve taken a look at the tape to find out. 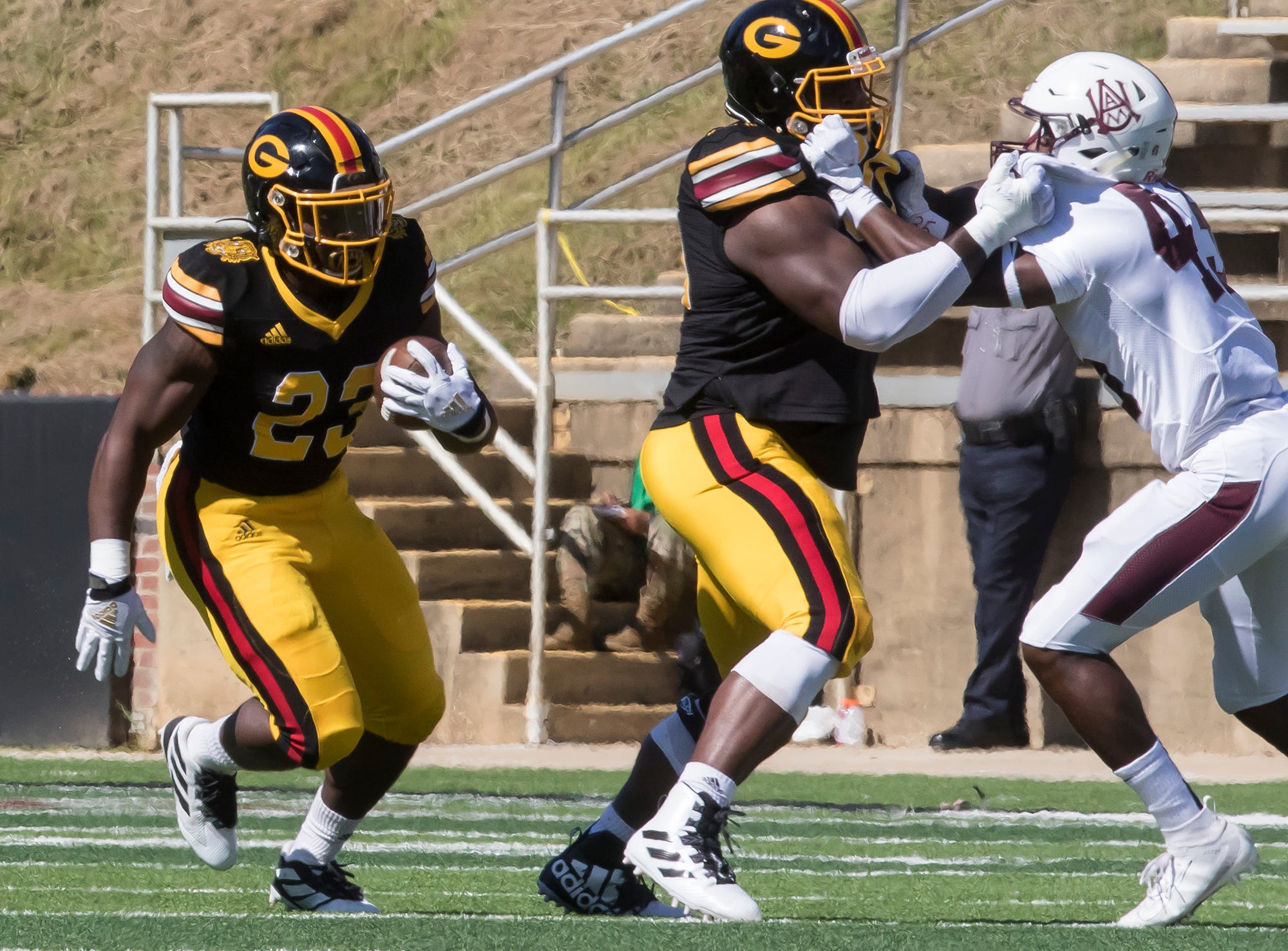 As a pass protector, Moore has the athletic traits to be success in the NFL, and while he will unquestionably face a more consistently elite level of athlete in the NFL than he did at Grambling, he showed the foot speed to cover laterally and showed no indications of struggling for lateral agility or quickness against the competition he did face (Moore played LG wearing #60):

And he had the power to hold up against rushers who looked to drive him back to the quarterback, aided by good hand placement that allowed him to control defenders with encouraging consistency:

And even when he wasn’t able to locate his hands inside early, he did a good job of fighting off the hands of defenders to work them off balance:

And he showed no problems finishing plays when he was able to get rushers off-balance:

However, he does need to work on his knee bend, as while this is an area that almost all offensive linemen could show some improvement at, at times he gets very straight legged, which in turn causes him to lean into blocks in quite a pronounced way:

This can then create issues recovering laterally, as with all his weight pushed forwards, he is unable to open his hips to pivot should defenders get outside of the narrow channel directly in front of him:

This is also something that more technical rushers in the NFL will be able to exploit with hesitations that get his weight moving forwards, only to then reaccelerate around him.

The other impact this has is that by leaning into blocks and playing very upright, he creates issues with arm extension that make it very hard for him to control blocks:

Moore has a lot of potential as a pass protector with the foot speed to cover laterally, the power to hold up against bull rushers and the hand placement and arm extension to counter more technical rushers, he just needs to continue to polish his game, especially with regards to his knee bend. Given his background at a smaller school the fact that he isn’t extremely technically proficient right now isn’t a significant red flag, and if he can take to coaching then he has a chance to get really quite good quite quickly. 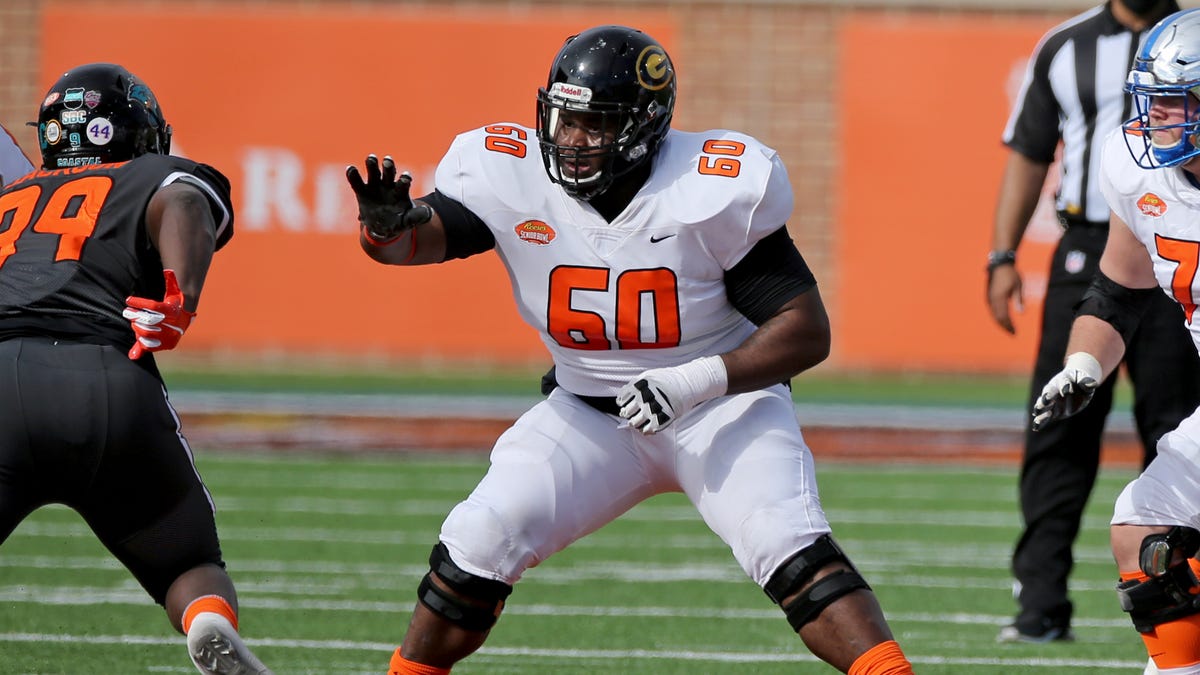 As a run blocker, Moore is able to transfer the power, hand placement and foot speed that he showed in the passing game, but as in the passing game he could stand to improve further in terms of his knee bend, as he can get a little too straight legged:

This has a couple of effects, as it limits his effective power and also creates issue with control, as straighter legs cause him to narrow his base and make it harder for him to adjust laterally.

The other effect it has is that it can make it hard for him to extend his arms consistently, something that was also an issue in the passing game, and improve his knee bend should also help in this regard:

As it is, it makes it too easy for defenders to crowd him and further inhibit his ability to control blocks.

David Moore the run blocker is a little less polished than David Moore the pass protector and improving his knee bend should make a huge impact on how effective he is able to be overall, but especially as a run blocker. He has the power to more than hold his own on the interior, and the hand placement and foot speed he showed in the passing game should translate well to a directional blocking scheme similar to that which the Panthers are expected to run. 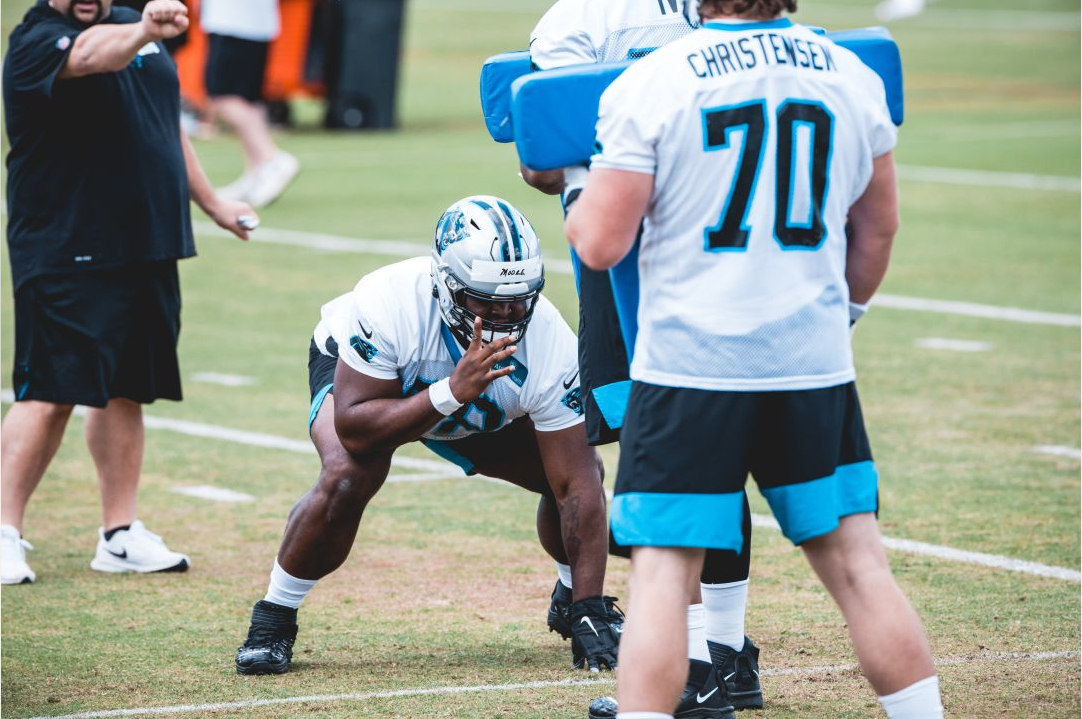 The other thing that is worth mentioning with David Moore is his ability to play out in space. As a run blocker, he does a nice job when working to the second level, with flashes of the knee bend to make controlled blocks on the second level:

And as a pulling blocker he shows both the movement skills to get out in space and make a play and the power and proactivity to make key blocks out in space:

Even if sometimes he would benefit from toning it back 10% in order to improve his control (this play was flagged for an admittedly somewhat questionable hold):

And these movement skills also show up when asked to get out on front on screens:

What stands out from these plays is both Moore’s enthusiasm to make blocks and his excellent athleticism to get out in space and make these plays. 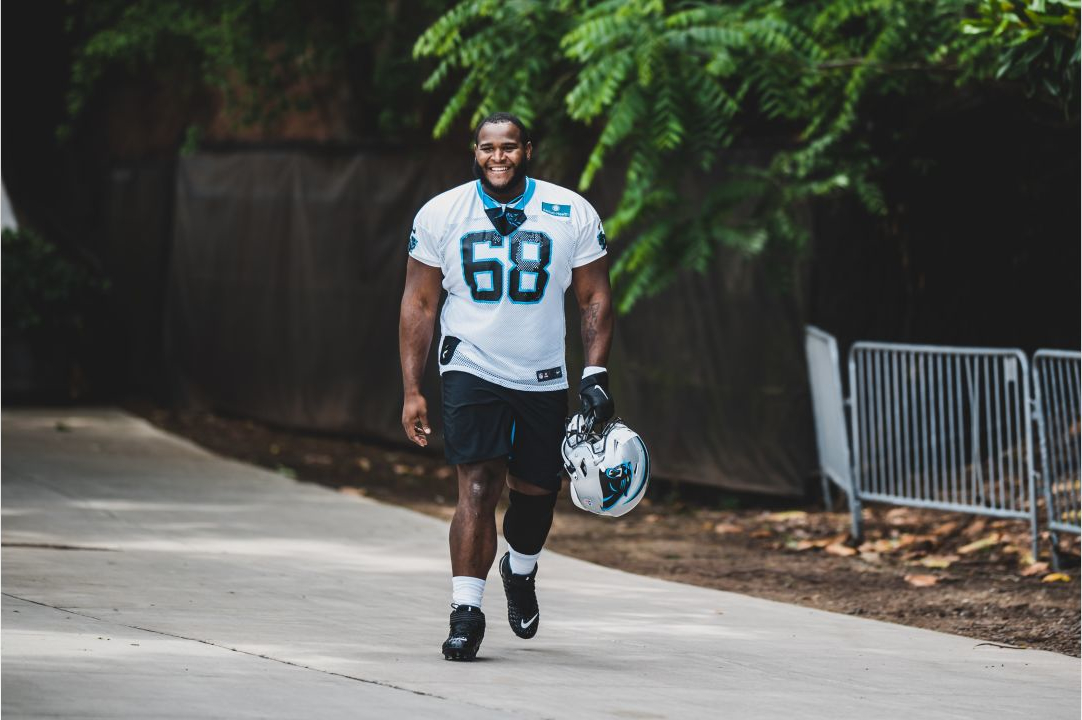 Moore likely won’t see the field as a rookie baring either a rash of injuries on the interior or remarkable development over the next few months. However, he has all the core traits needed to be a very good interior offensive lineman and, while he is quite raw from a technical perspective, with both John Miller and Matt Paradis on expiring contracts as the only returning starters, Moore has a chance to put himself in a position to compete for a starting role in 2022 with a year of development.

On issue the Panthers repeatedly faced in the Rivera years was a lack of depth on the offensive line, something that was really exposed during the 2016 season especially, and while not every one of the five offensive linemen the Panthers have brought in this offseason will end up as long-term starters, by adding a certain level of depth their give themselves a degree of insurance they have lacked in the past and allow for a lot of Matt Rhule’s favorite thing: competition.