Film Room: How Chuba Adds To The Panthers’ Running Back Room 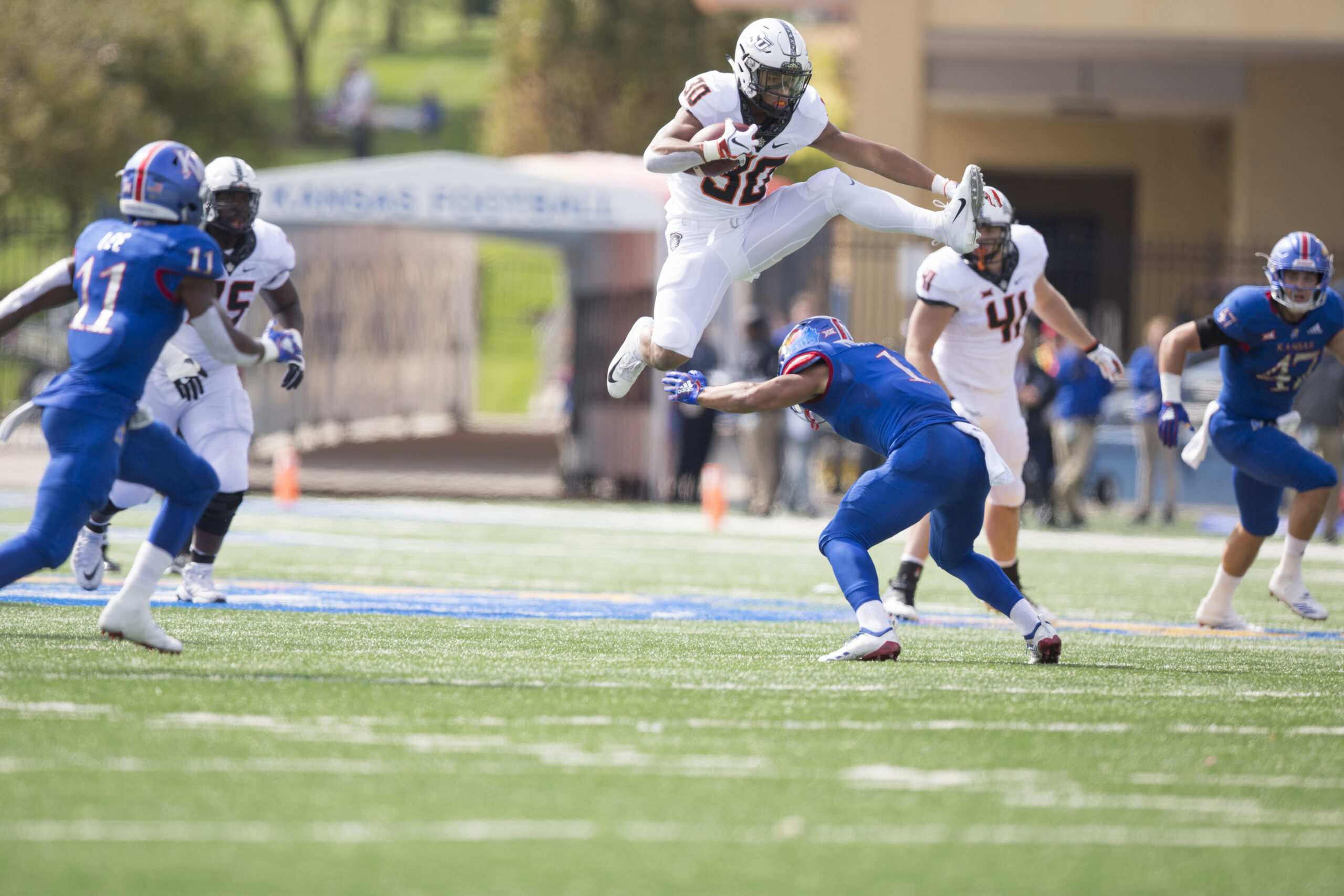 Going into the 2021 NFL Draft, there were many position groups the Panthers were expected to prioritize; offensive line, defensive tackle, cornerback and tight end to name a new; but one area the Panthers weren’t expected to target until at least the end of day three was running back. It was therefore something of a surprise when the Panthers selected former Oklahoma State running back Chuba Hubbard with the 126th pick.

Hubbard certainly has an impressive resume, putting up nearly 4,000 yards from scrimmage over three seasons, to go with 36 total touchdowns, including a 2,094 yards 21 TD rushing performance in 2019. What is less clear from the stat sheet, however, is how he will fit in the Panthers’ offense alongside the likes of Christian McCaffrey, who has put up over 120 combined yardage per game in each of the last three seasons, and Reggie Bonnafon, who averages over seven yards per touch over his first two seasons. 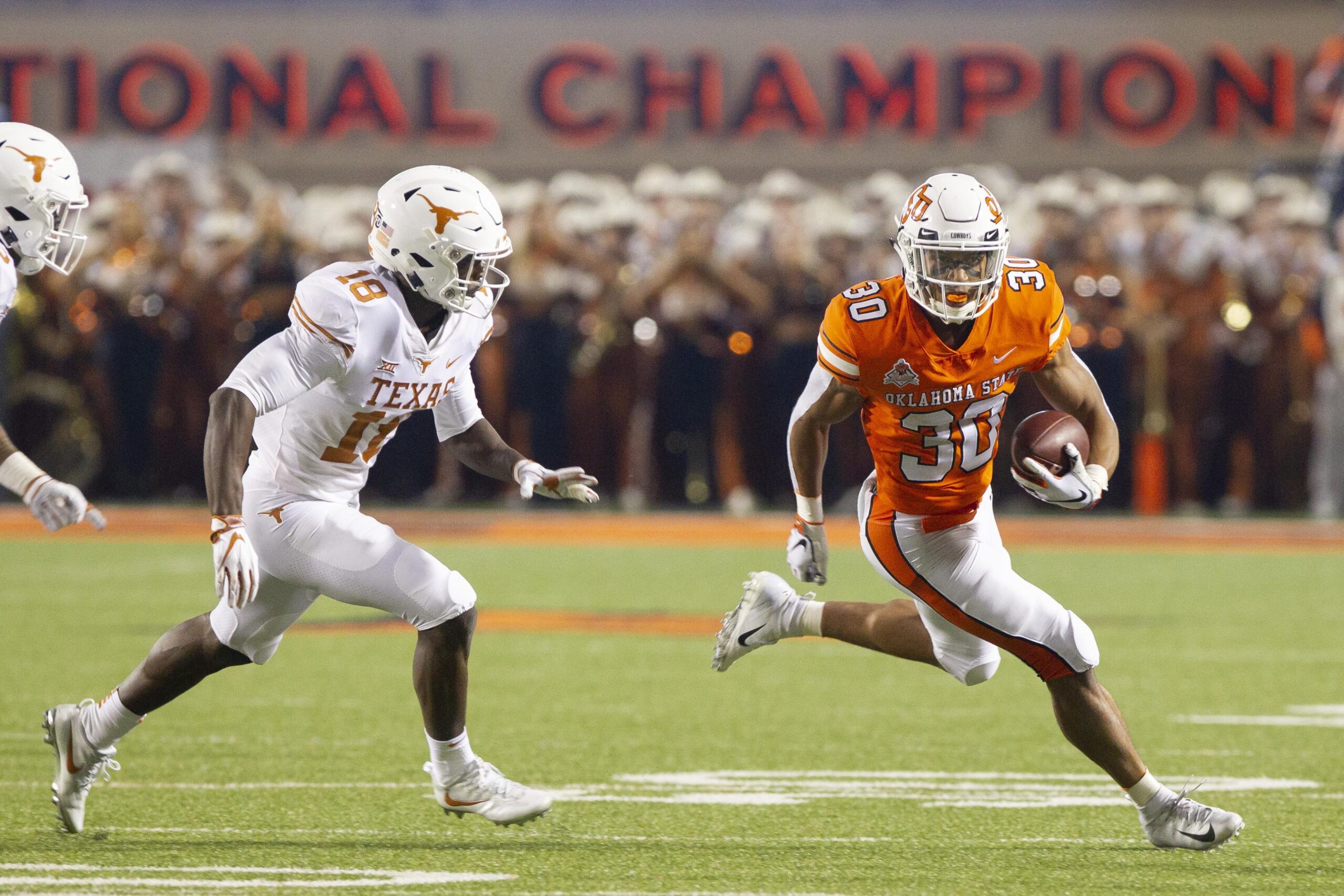 Speaking following the draft, Matt Rhule went into some detail about their thinking in looking to add another back:

“We wanted to add another young back that could bolster that room. We saw last year you need depth at that position. We went through a lot of guys,” said Rhule.

Depth is unquestionably important, but to spend a fourth round on a player, especially at a position like running back, there needs to be an expectation that a player can contribute to what the team is looking to do offensively. In order to explore how Hubbard might be able to get snaps on offense in 2021 and beyond, we’ve taken a look at the tape, both from 2020 and 2019, to examine what he does well, what he could improve at, and how that all fits into what the Panthers are looking to do. 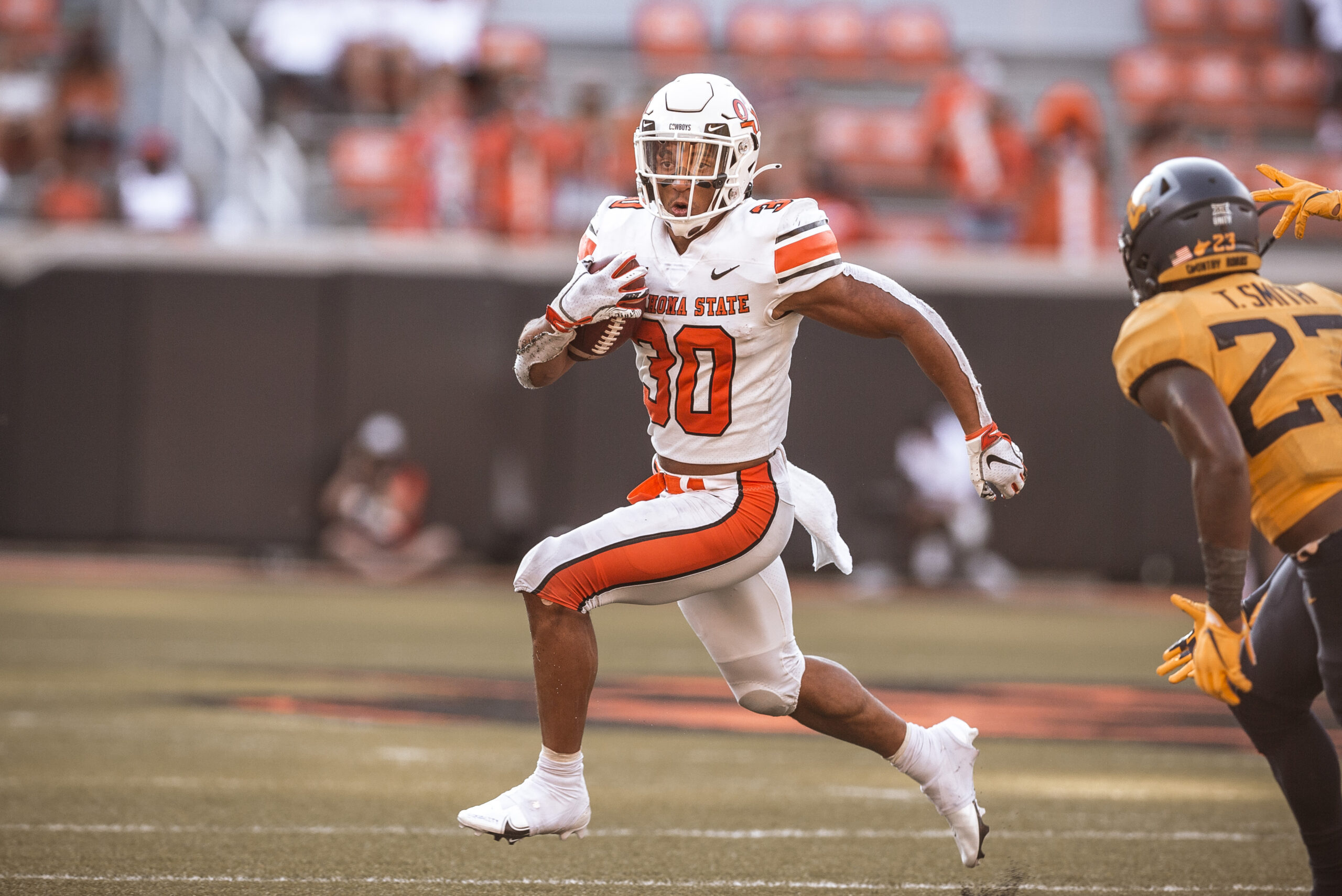 As a ball carrier, Hubbard isn’t hyper-explosive over his first few steps but is able to put his foot in the ground when working laterally and break into the second level:

And while he didn’t consistently break off huge plays in college (he had a rush of more than 50 yards in 25% of his games over his final two seasons at Oklahoma State), he does have the speed to turn gaps in the defense into chunk plays:

And given that the team seems to be looking to find a group of running backs who are all able to replicate a similar skillset it’s not completely shocking that when he is able to work downhill with subtle changes of movement that there are some plays that are quite similar to those that Panthers fans will be used to:

He also shows good contact balance, and while he certainly isn’t going to run over many defenders, he is able to bounce off tacklers who don’t wrap up:

And he does a pretty good job of keeping his legs churning through contact to make sure that he is able to add extra yards:

What Hubbard doesn’t show much of on tape is an ability to make a man miss in space as, while he is able to navigate through partially open spaces well, when a defender is able to line him up, he rarely evades the tackle. 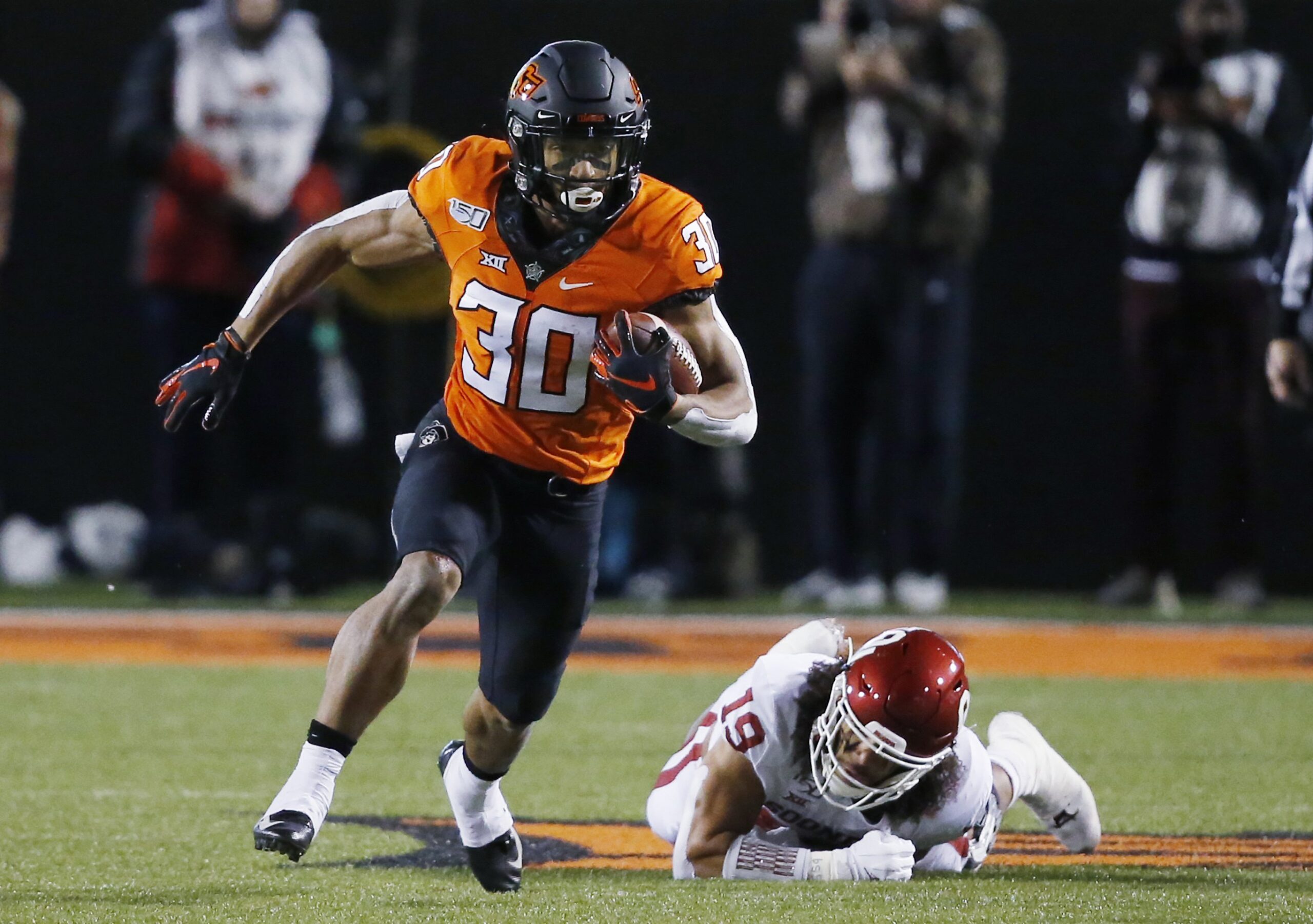 The other important part of the rushing game is how a player is able to navigate rushing lanes. This wasn’t probed as thoroughly at Oklahoma State as it might be in the Panthers’ offense, but Hubbard showed a nice ability to spot when defenders peeked inside, thereby opening up a chance to bounce the ball outside:

As well as recognizing when the outside rush isn’t there and instead diving inside to make sure he got positive yardage:

Though he can at times be a little over-aggressive in terms of looking for chances to get outside the defense, and while he was sometimes able to get away with this at the college level:

There will likely be more plays like this at the NFL level if he doesn’t lean to be more content with positive yardage rather than being quite so aggressive in hunting for the big play:

The only other slight knock on his game as a pure rusher is that there were a few fumbles that showed up on tape, and while his seven fumbles over some 461 carries between 2019 and 2020 is not appallingly high, it is about 50% higher than McCaffrey’s rate in the NFL and is something that should be monitored going forwards.

As a pure rusher then, Hubbard lacks any one stand-out trait, and is unlikely to be a featured back at the NFL level even if he wasn’t behind McCaffrey on the depth chart, but shows encouraging vision, is surprisingly difficult to bring down given his 6’0 210lbs frame, and has enough speed to break big plays here and there:

How he will find opportunities to carry the ball in the Panthers’ offense will be down to Joe Brady, but as with the likes of Rodney Smith and Reggie Bonnafon there should be chances for him to add value here and there. 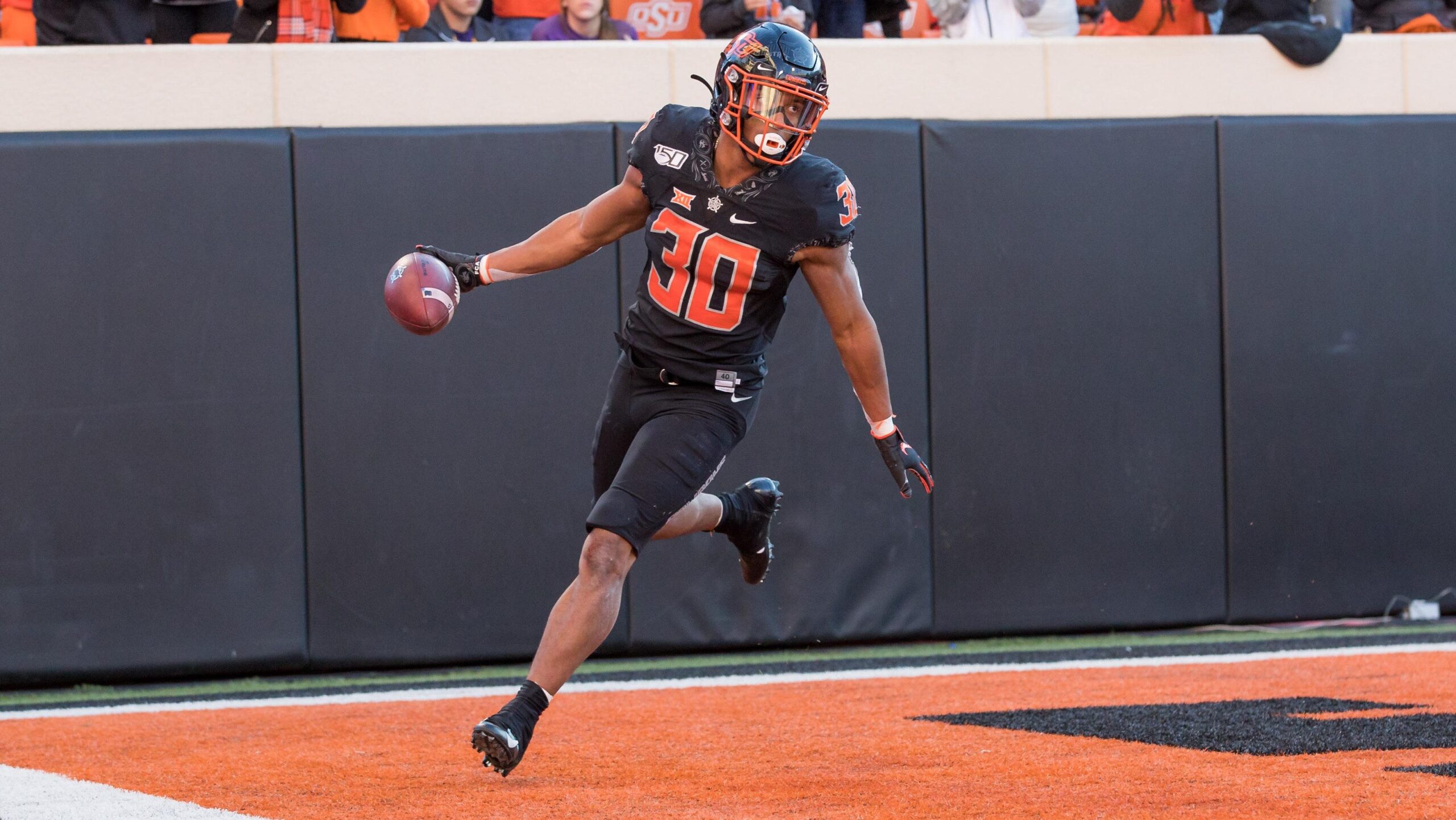 Where he will need to make more of an impression in the NFL than he did in college is in the passing game and, speaking to the media following his selection, Hubbard was clear that improving as a pass protector, but believes that he can make an impact as a receiver.

“I know I definitely need to work on my pass protection so that is definitely something I know I can get better at,” admitted Hubbard.  “In regards to the passing game and all that stuff, I definitely think I can be a threat there and a weapon there. Obviously, Christian McCaffrey does a lot of work there. I model a lot of my stuff when it comes to catching the ball after him. So I feel I can bring a lot of the same stuff he can.”

It is certainly fair to say that Hubbard has room to improve as a blocker, partly because he will need to master the mental side of pass protection for a running back in the NFL, but also because there is certainly room for improvement from a technical perspective:

As a receiver, he did show good hands on tape, as well as some flashes of a route runner:

And, like McCaffrey back in 2017, he had slightly more chance to show this off at his pro day than during games, but this is going to be an area where he needs to continue to develop going forwards in order to make it an active strength of his game. 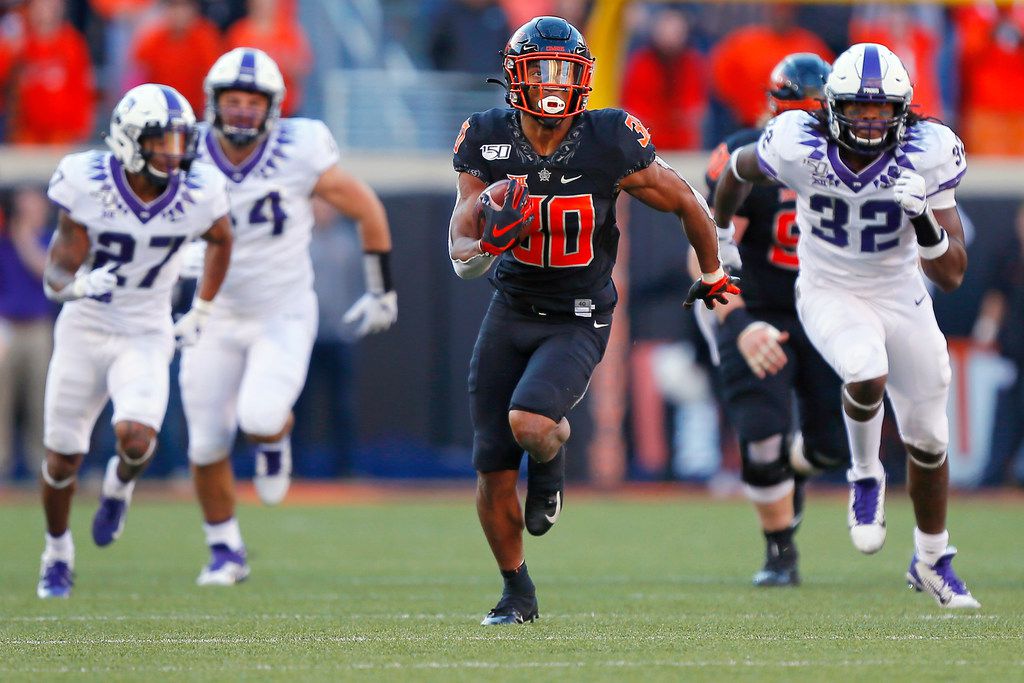 Overall, Hubbard is a well-rounded player without a single clear calling-card but who should be able to contribute to the rushing attack as a rotation piece and add some value as a receiver, especially if he can continue to develop as a route runner. In the short term, Matt Rhule made it clear that they expect him to contribute significantly on special teams and this is likely going to be the area where he has the biggest opportunity early on.

However, as players have shown year after year, if you can impress with the chances you get both during camp and the preseason then coaches will find a way to get you on the field. The Panthers’ issues this year are unlikely to come from a lack of skill position talent, but this is a pick that looks to add to that depth, while also giving the Panthers another option.