Film Room: How Dan Arnold Can Help The Panthers’ Offense 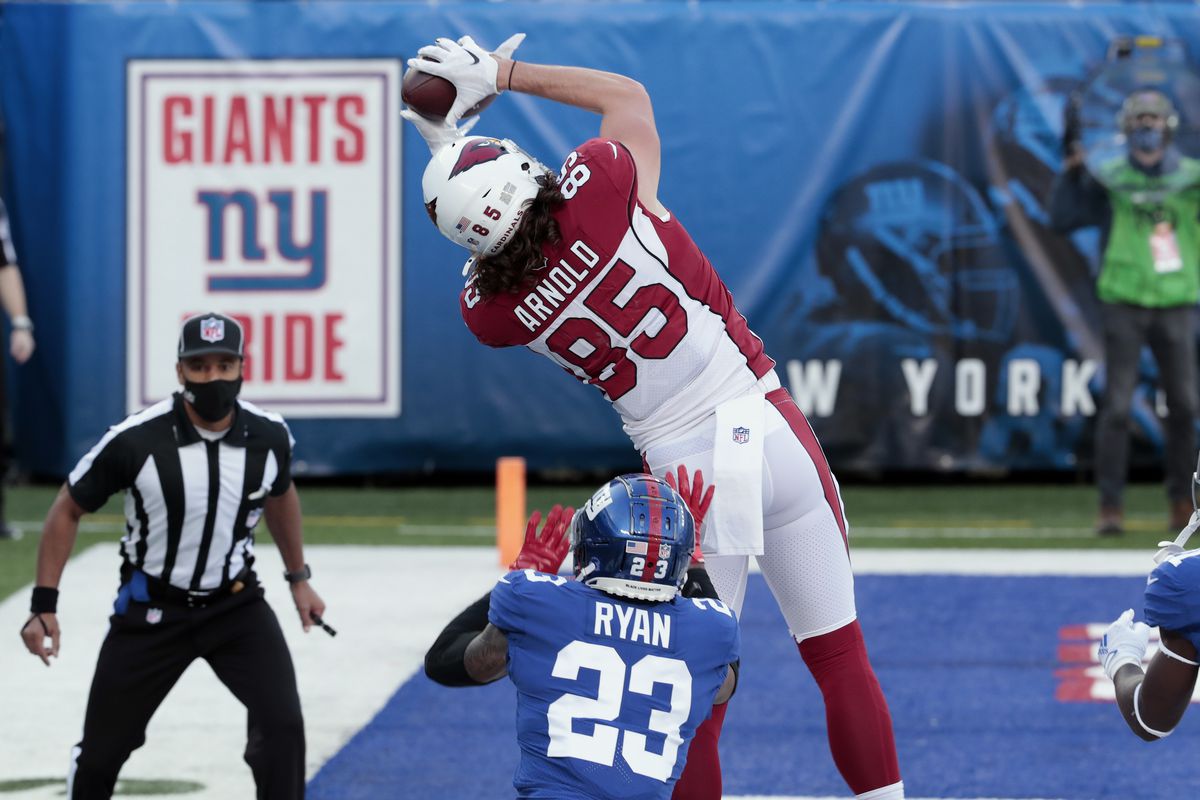 The Panthers have finally made their first addition to the tight end room this offseason, signing Dan Arnold to a two-year deal on Friday. Having lost Chris Manhertz to free agency and having struggle to get much production from the TE group in 2020 even with Manhertz, this addition is not only a welcome one but also possibly not the last addition the Panthers will make at the position.

Arnold, who only turned 26 last week, certainly has an encouraging resumé with over 400 yards receiving and 4 TDs last season with the Cardinals. For comparison, the Panthers four tight ends combined for under 250 receiving yards and just 2 TDs in 2020. However, in order to fully understand how Arnold can help the Panthers we have to turn to the tape. 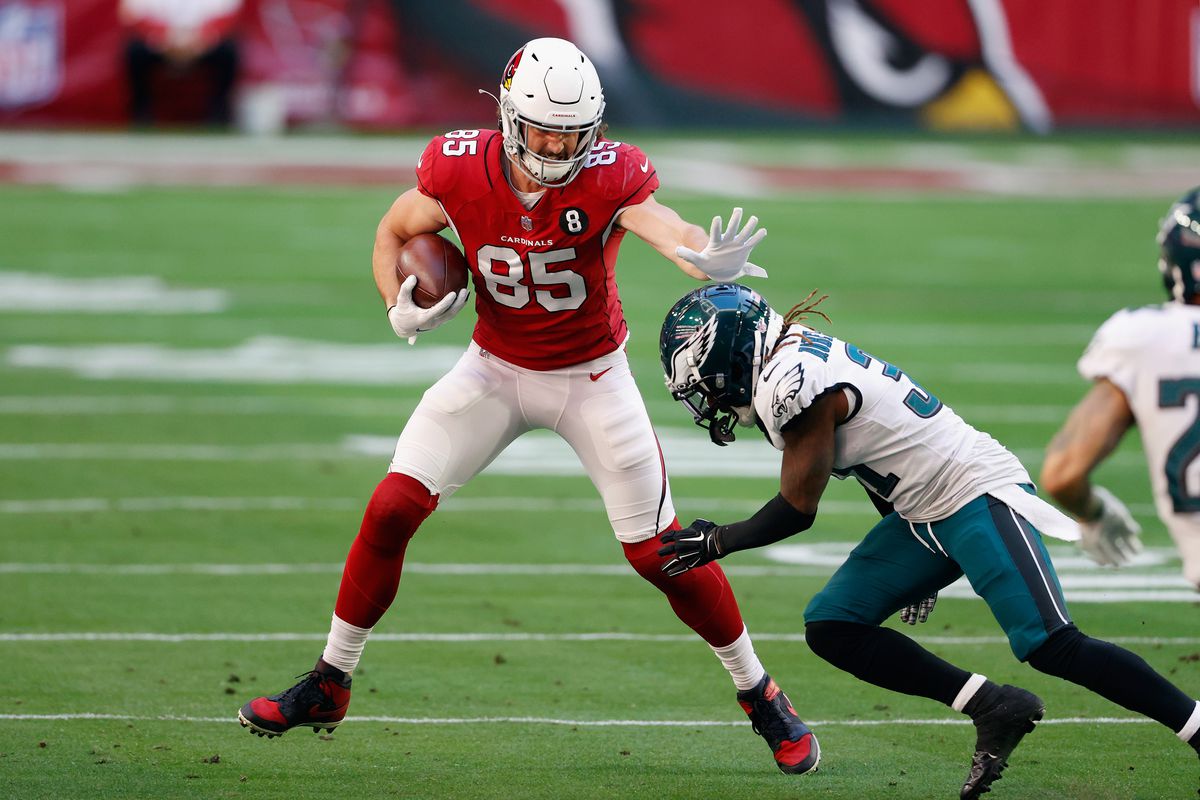 Arnold’s certainly going to make an impact on the Panthers’ passing game, and he has the speed to threaten down the seam. Something that the Panthers really missed in 2020 (please note, Arnold wears #85):

Even when he didn’t get thrown the ball, teams had to respect his ability to stretch the field, which then creates space for other players either underneath:

Or over the top:

And if teams look to cover him with a linebacker in man coverage then he should be able to create consistent vertical separation for a chance at big plays down the field:

It should come as little surprise then that his receiving production in 2020 came at a remarkable rate given the number of targets he received. Arnold gained more than 14 yards-per-reception in 2020, a mark that Greg Olsen managed just once in his career (2015) and which is way ahead of any of the Panthers’ TEs from 2020, none of whom averaged more than nine. Given that he also averaged a catch percentage of nearly 70%, this is a really impressive feat.

Given the impact that the Panthers will hope that Christian McCaffrey is able to make working out of the backfield, having a tight end who is able to force defenders over the middle of the field to focus on taking away the ball over the top should give McCaffrey the space to be even more effective than usual underneath. 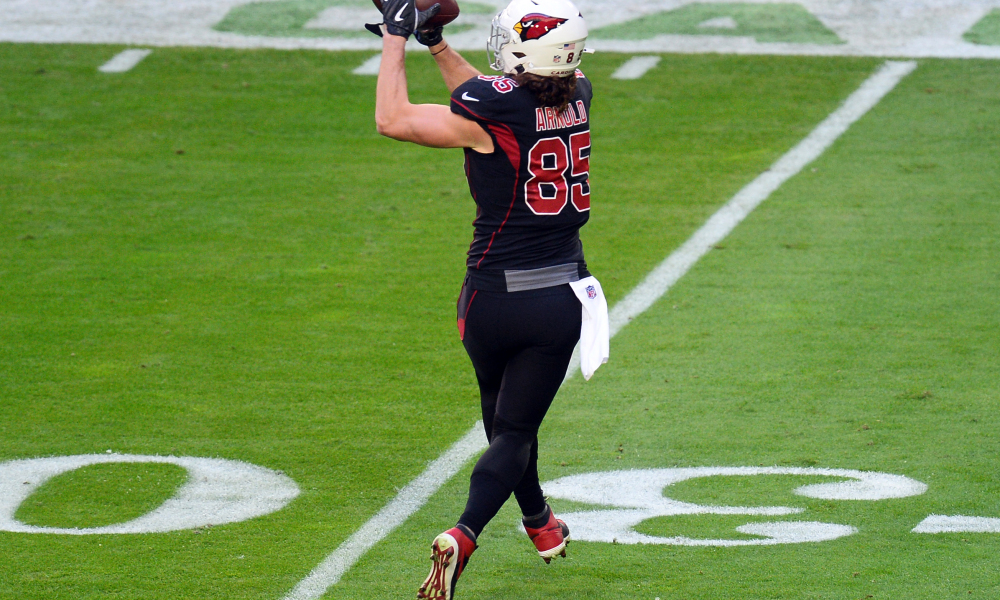 He also shows nice hands, with an ability to make catches through contact:

And away from his frame:

And while this pass here ultimately wasn’t on target, his length and good hands should be of value in the red zone where the Panthers can try and isolate him against defenders on fades:

While simply being able to stretch the field and win contest catches will add something the Panthers lacked at the position in 2020, in order to be a more consistent feature of the passing game, Arnold will need to show the ability to create separation as a route runner at different levels of the field.

At the head of underneath routes against man coverage, Arnold demonstrates good quickness (especially for his size) to create separate accelerating away from defenders at the head of routes:

Though his change of direction isn’t anything notable and he can struggle when asked to make more dramatic changes in direction at low speeds:

And while his light frame (he weighs less than 10lbs more than DJ Moore despite being 6″ taller) allows him to be quite quick for the position, he lacks the bulk to be able to make consistent use of his frame to generate separation at the head of routes as defenders are largely able to ride the contact:

Where he does show real promise, however, is as a route runner down the field. He is able to carry speed well through changes of direction at speed:

And flashes a really encouraging ability to combine this with an understanding of how to sell defenders prior to the cut in order to create maximum separation:

And shows good, tight footwork at the head of routes down the field, allowing him to generate separation against man coverage by getting defenders to stop their feet while being able to maintain his own momentum:

As well as a good feel for the space in zone, which should be an area where he is able to have a real impact if teams look to this approach in order to match-up with the number of offensive weapons the Panthers possess:

There are still times where he could improve, such as here where he doesn’t really sell the underneath route as his shoulders never turn off the vertical:

But given the sometimes-limiting route tree that he was asked to run in Arizona, there should be real optimism about his ability to contribute as a quality route runner down the field, even if he is never going to be the shiftiest tight end at the head of routes underneath, with this same somewhat-limited change of direction also minimizing the impact he is able to make after the catch beyond simply running into space:

Of course, playing tight end is about more than just catching passes and running routes, so how does Arnold get on as a blocker? 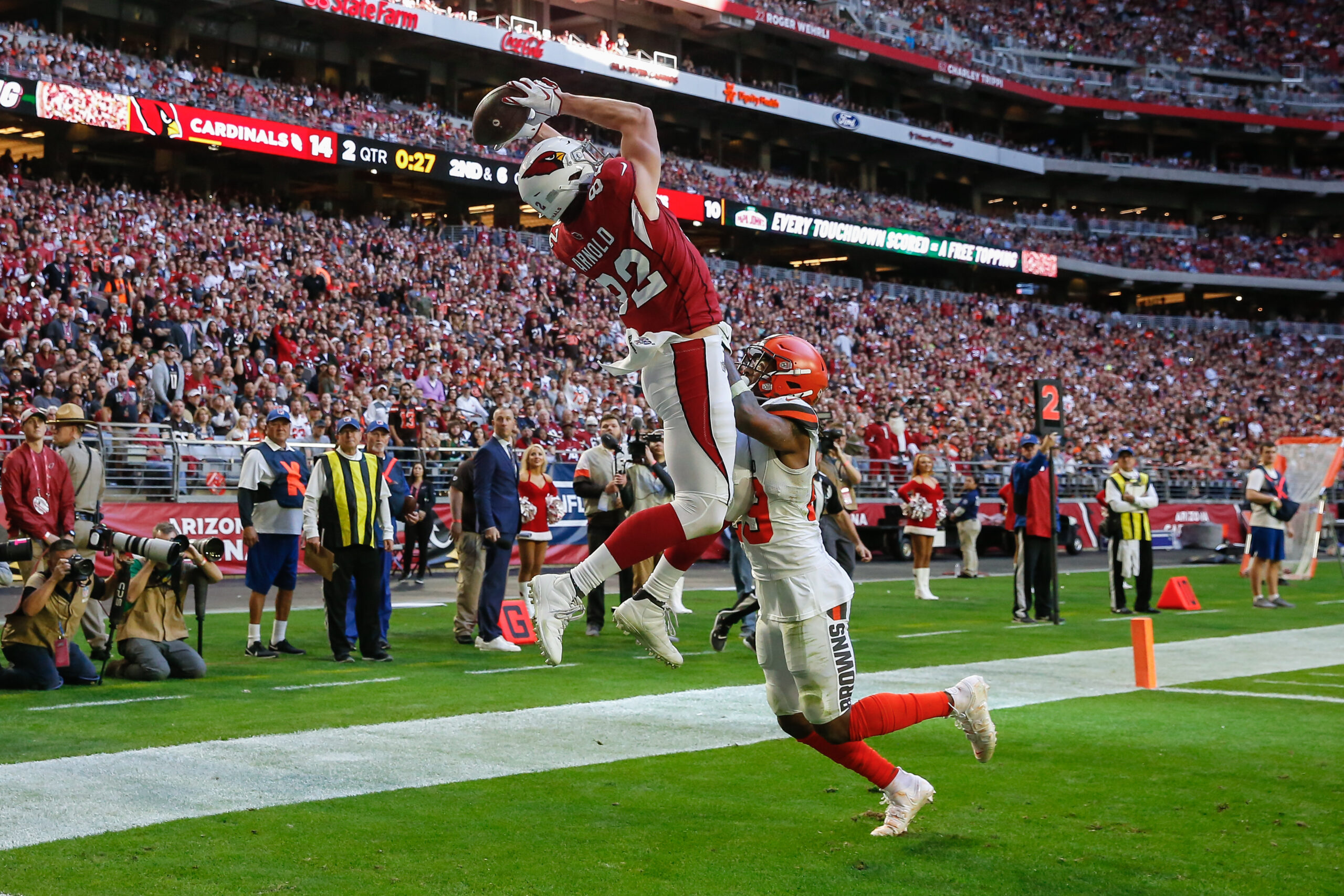 There’s really no nice way of saying this, Arnold is not a very good blocker for a tight end. Given that he is more than 30lbs lighter than even relatively slight TEs such as Greg Olsen, it is hard to imagine that he will ever be able to be hugely impactful as an in-line blocker. However, with some technical refinement he should at least be able to be a competent blocker in space and somebody who can seal the back side of plays.

For a start, he needs to set a more consistent base, especially when on the move as with the long legs he has he is going to struggle to locate blocks without significant improvement to his knee bend:

And even with this improvement, he needs to do a much better job of locating his hands as too often he either failed to secure his hands inside allowing the defender to side off the block:

Or had his strike easily knocked-aside by the defender:

Given his potential impact as a receiver the Panthers would be best advised not to use Arnold as a pass protector any more than is absolutely necessary, as while he is able to get in the way and redirect defenders:

If he is asked to sustain blocks then his problems with knee bend, footwork and hand placement are likely going to get him into difficulty:

As a blocker then, Arnold has a lot of room to improve and, while he has a chance to be the Panthers primary receiver at the position in 2021, the Panthers will likely not be able to use him as an every-down player for this reason, at least until he shows marked improvement. Arnold should be a very useful rotation piece for the Panthers, but he is probably not a clear #1 TE in the way that Greg Olsen was. 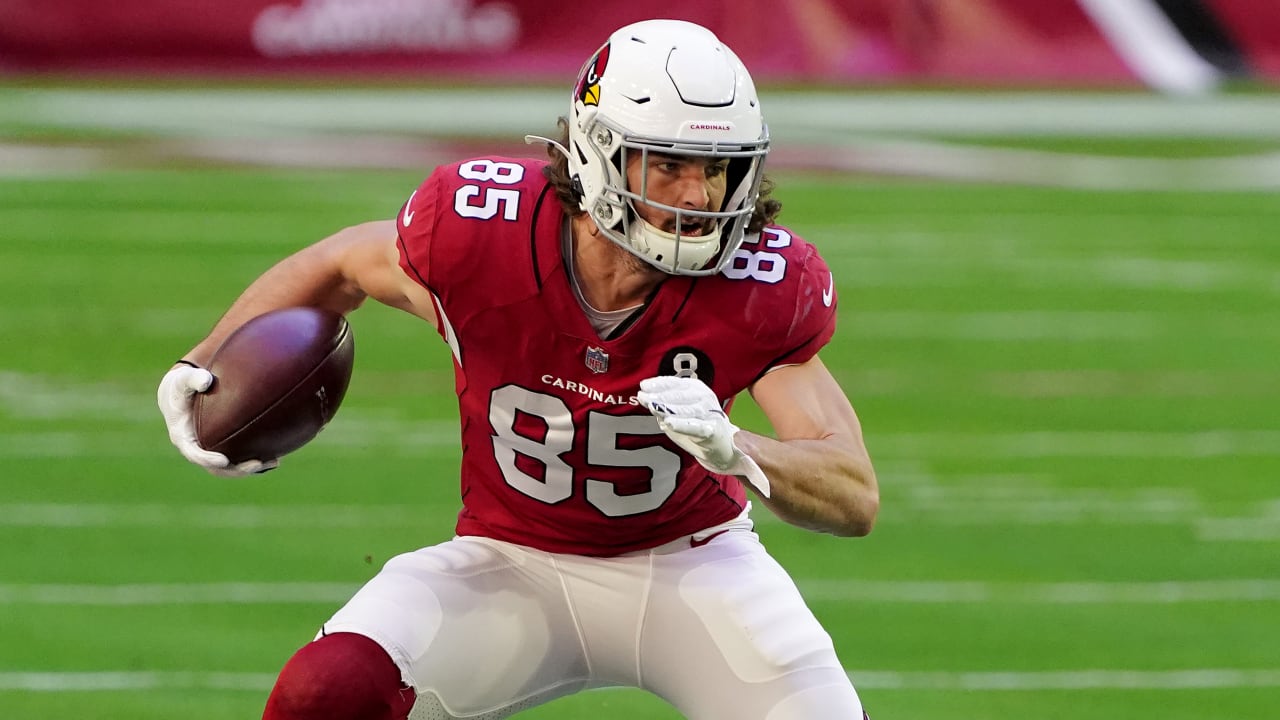 Given the departure of Manhertz then, the Panthers do still need to add more options at TE this offseason if they can and, given that Arnold will likely line up as a receiver as much as a tight end, the Panthers carrying four TEs again in 2021 is a real possibility.

Finding somebody who is able to compete with Colin Thompson for the blocking TE role and maybe also somebody to develop as a more complete option with Ian Thomas entering the final year of his contract should therefore be serious considerations for the Panthers for the remainder of the offseason. With that said, the signing of Arnold should be seen as a positive step for the Panthers, as he gives them yet another legitimate option in the passing game.