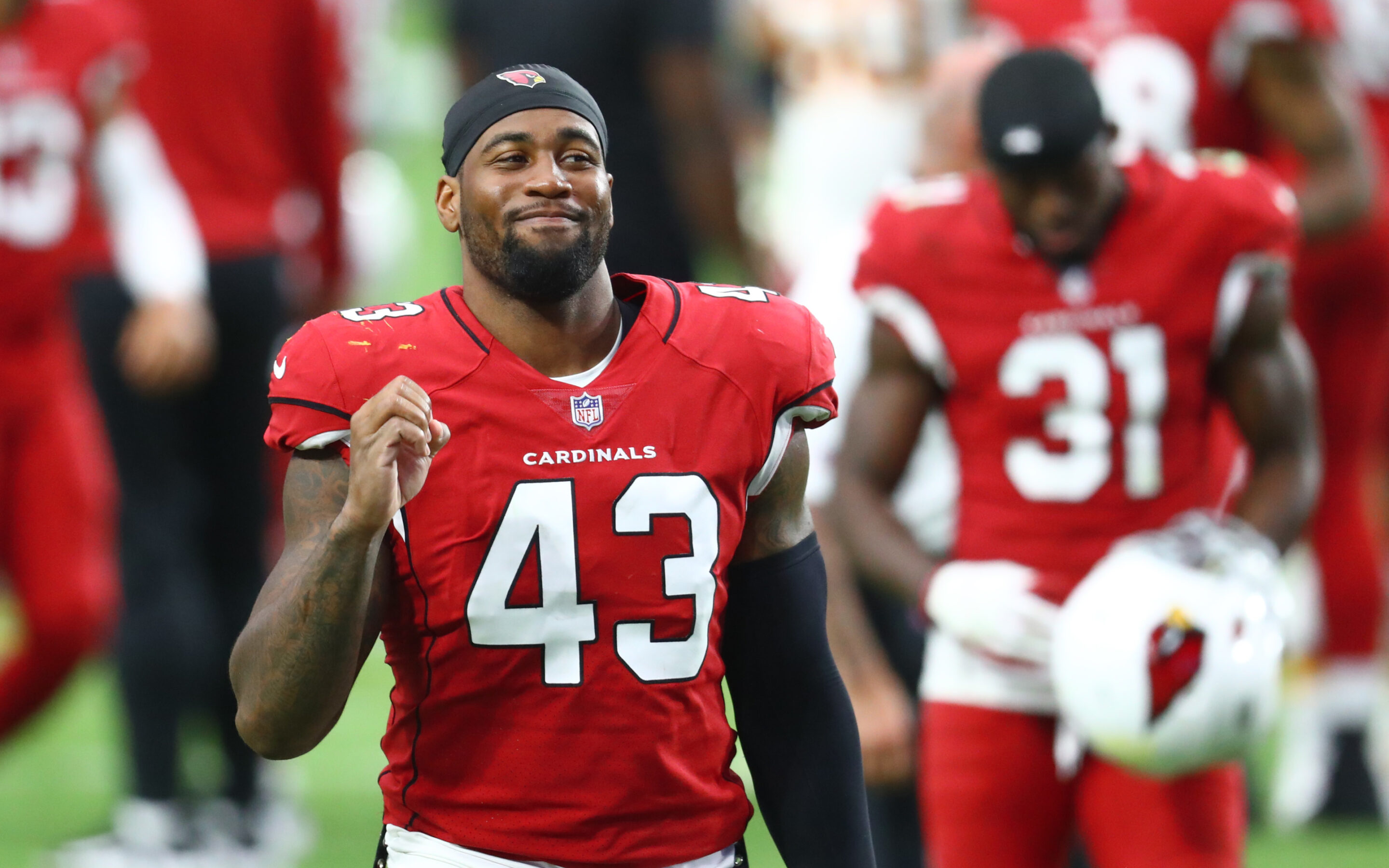 The Panthers might have had a quiet second day of legal tampering, but when free agency formally began on Wednesday, they didn’t take long to make a flurry of moves on defense. Possibly the most notable of these was the signing of edge rusher Haason Reddick on a one year deal, reuniting him with Matt Rhule and Phil Snow, who coached him back at Temple.

Despite the obvious links to Rhule and Snow, the signing of Reddick comes as something of a surprise given the price tag that would normally be associated with a 26 year old edge rusher coming off a 12.5 sack season. However, with Reddick signing just a one-year deal, he now has a chance to cement himself as one of the better edge rushers around the NFL – and to be paid like it next offseason – while the Panthers get a chance to see how he fits into what they already have while at the same time placing themselves at the front of the queue to secure his services long-term.

So, with that in mind, what does Reddick show on tape in terms of skillset, how might be fit in Carolina, and what does he need to do to take his game to a higher level still? 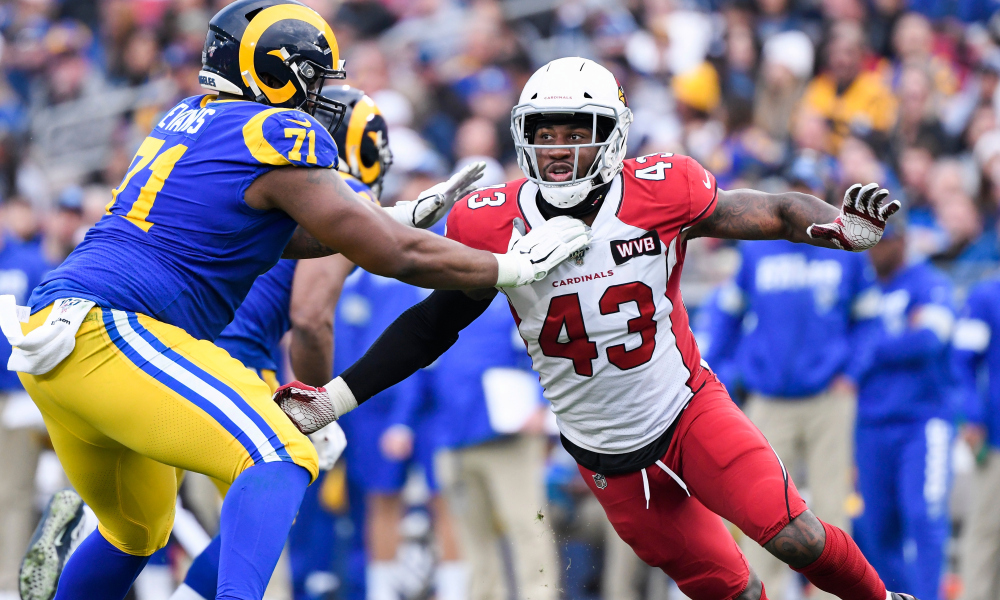 Part of the reason why Reddick may have found his market a little less favorable than his 2020 sack production would indicate is that he really only has one season of proven production at the NFL level. This is largely due to the way in which he has been used in Arizona, where for the first three years of his career they attempted to convert him into an off-ball linebacker. While he did play off the ball at times in 2020, he was finally given a chance to work as a stand-up pass rusher, the role that had made him the 13th overall pick out of Temple in 2017.

One of the factors that may have led the Cardinals into trying to use him in this was is his size (6’1, 235lbs), and at this size there are naturally going to be some questions about his ability to hold up against the run. However, as Brian Burns has proven so far in his NFL career, lighter edge rushers can still be effective run defenders with good technique.

So how does Reddick get on in this regard? 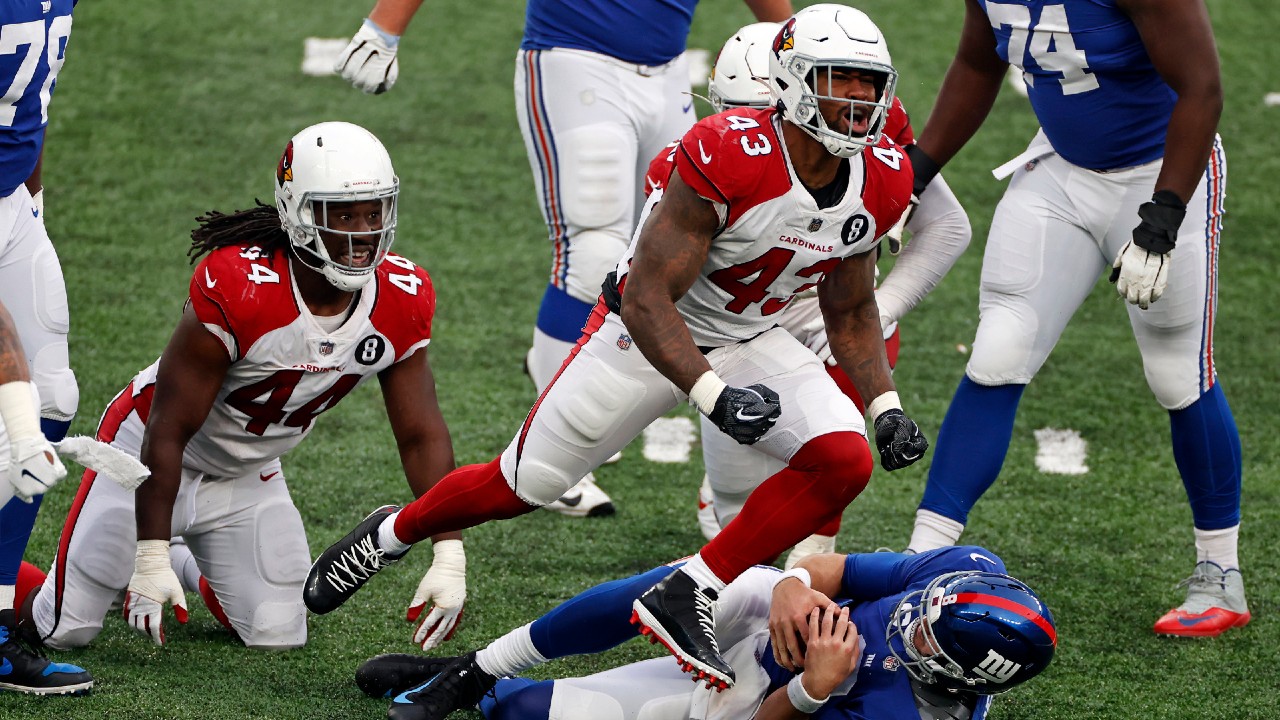 Crucially, he shows the strength to hold his own at the point of attack, at least when combined with good pad level and arm extension (note Reddick wears #43):

While he is unlikely to be driving tackles back into the ball carrier, being able to secure an edge in this way allows for inside defenders to pursue effectively to the ball and makes it hard for offenses to keep running it at you.

A major factor in his effectiveness is that he is able to use his natural leverage well, getting underneath the pads of offensive linesmen and making it hard for them to use their power advantage to drive him off the ball. He also shows nice arm extension which can not only help to exaggerate this effect, but allows him to work off blocks effectively and will be especially valuable if the Panthers ask him to two-gap at times:

On the whole, he was able to combine this nice arm extension with pretty good hand placement, though he did show a slight tendency to punch a little wide with his inside arm which made it easier for blockers to crowd him out with their superior size:

Given that he spent so little time working at the line of scrimmage prior to this past season, this is hardly a major flaw and is something that he should be able to improve upon with time.

However, with all that said, it is clear from the rare occasions where he doesn’t get it right from a technical perspective just how important consistent pad level and arm extension are going to be for him in the run game – when he allowed himself to get caught a little upright, he did have a tendency to start going backwards rapidly:

And there was at least one occasion during the two games used for this piece that he got caught watching the ball carrier and was worked out of his gap:

Like Burns, Reddick is never going to be confused for a strong-side defensive end, but plays with consistently good leverage and uses his arms well to keep his frame clean and work off blocks. Importantly, he is also a pretty good technical tackler who wraps well:

Of course, while run defense is important, that is not the reason why Reddick signed in Carolina, so how about Haason Reddick the pass rusher? 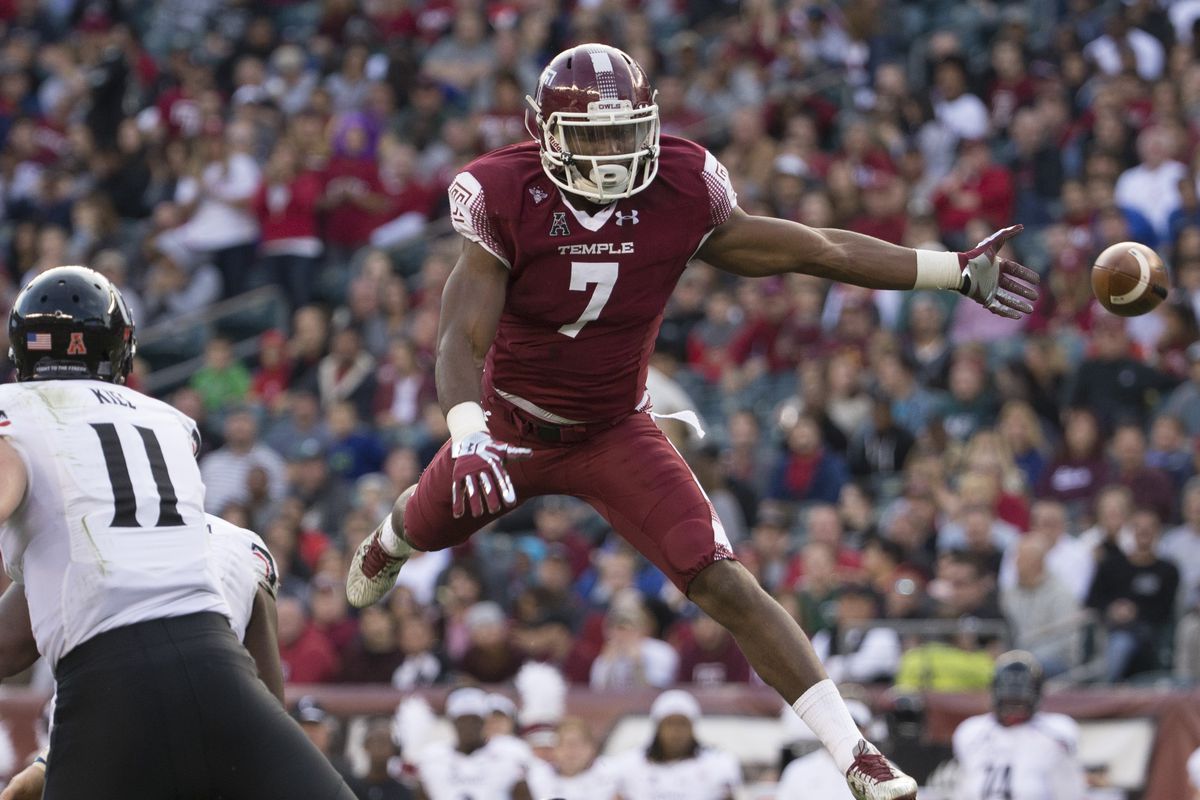 On tape, Reddick doesn’t show a Burns-esque get-off, but one thing he and Burns do both do well is turn the corner after using their speed to generate leverage. While with Burns this is largely due to his unparalleled bend, Reddick instead does a good job of freeing his hands and then looking to drive through his inside shoulder back to the ball:

Given that he was playing almost every snap during his 11 starts last season, including five games where he played over 70 snaps, it is not unreasonable to expect Reddick to be able to show more consistent explosion if asked to be used slightly more tactically in Carolina, perhaps playing closer to the 55 snaps per game that Brian Burns fluctuated around.

Even though he wasn’t consistently burning tackles with his speed rush, he showed an ability to generate outside leverage with subtle changes of speed, trusting that he could reaccelerate more easily than a 320lbs offensive tackle:

While his quickness and fluidity also allowed him to make a real impact on twists where he was able to carry momentum back inside to create a mismatch against the guard:

And when he wasn’t able to get home without getting blocked, he showed a nice mini-rip move to work off blocks, where his natural leverage allows him to drive blockers upwards and momentarily off-balance before dragging them forward and releasing to the side:

Something else that really showed up in the Seattle game was his ability to keep himself alive in plays before looking to chase the play down when Wilson looked to scramble:

If you remember back to Brian Burns’ rookie year, he was able to make a massive impact in the games against Arizona and Houston because of this ability to keep his frame free and them to chase down for the cleanup sack when the quarterback looked to scramble. While this is never going to be the core of an edge rushers game, it is a good skill to have when you initial rush fails.

However, while there is a lot of good in Reddick’s pass rush, there are also some areas where he could stand to improve. 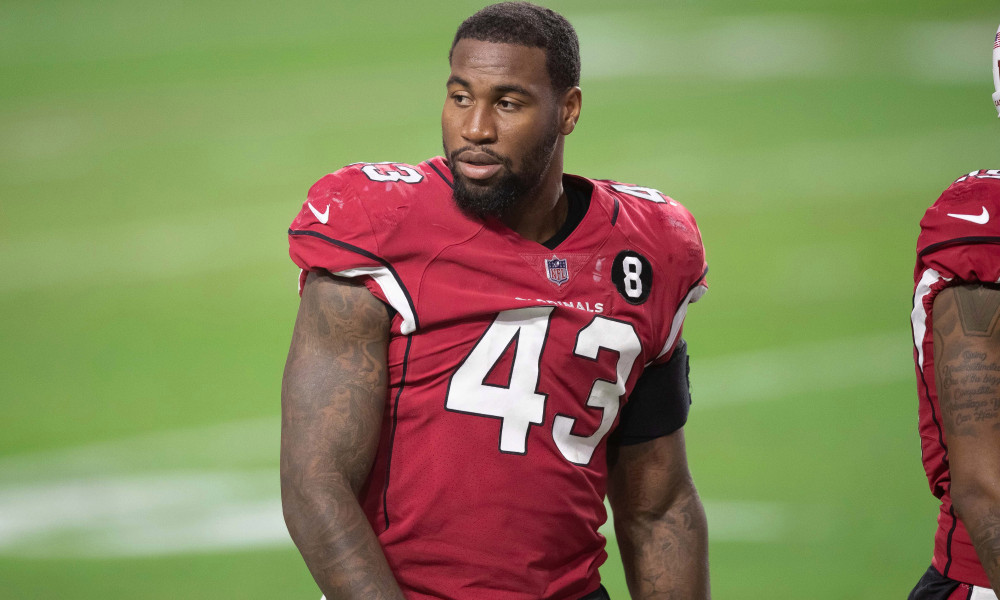 The first of these is his arm extension, as while this is really good in the run game, as a pass rusher he can be a little slow to get his arms up, thereby allowing blockers to swamp him:

This is notable when he looks to bull-rush using his speed to work the tackle off-balance, as while he gets an initial drive the tackle it able to recover more easily than would be possible if Reddick extended his arms more and looked to drive him upwards and off-balance rather than just backwards:

The bull-rush his never going to be his primary mode of attack, but he could make it a useful, if minor, part of his repertoire should he be able to execute it with more consistent arm extension.

However, the most notable issue with Reddick as a pass rusher on tape at the moment is the lack of a true inside counter to his outside rush. This is something that Brian Burns does really well on the whole, he uses his speed to get tackles committed outside before breaking inside of them. Reddick did show an understanding of how to take advantage of this, but currently his inside counters are more athleticism and effort rather than developed moves:

While Reddick is entering his fifth season in the NFL, he has only spent one as an edge rusher on anything like a consistent basis, and there should be a reasonable amount of optimism that he will be able to make continued strides with more time to develop into this role.

It is probably fair to say that Reddick’s 2020 sack numbers are a little flattering, as they accounted for over a third of his total pressures and nearly half of them came in one game against the Giants, but he still showed and ability to generate consistent pressure and has the core tools to be able to become a nightmare for teams to try and block one-on-one. 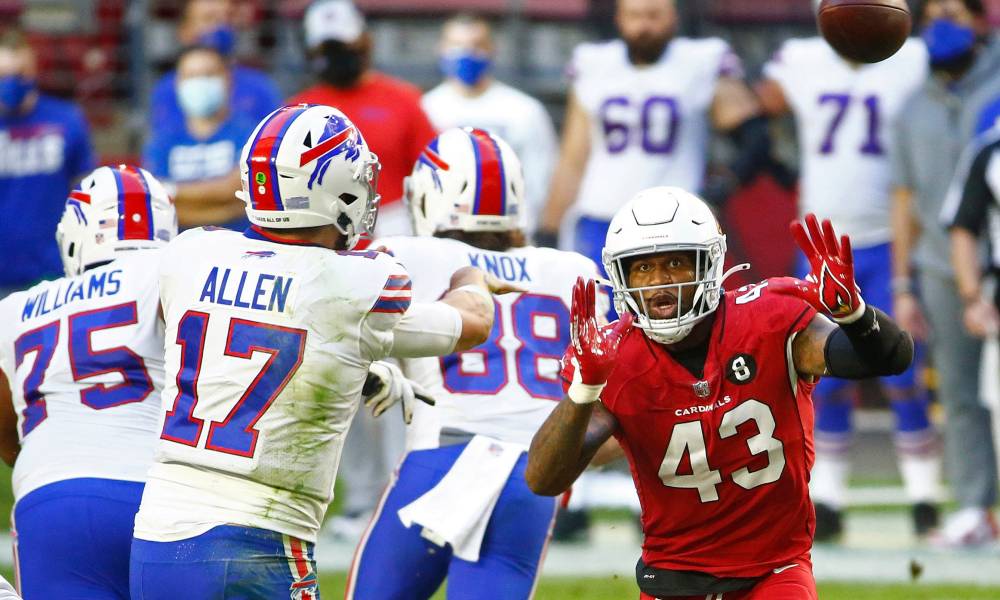 It is also worth noting that while Reddick will likely be used primarily as an edge rusher, the Panthers will probably ask him to drop into coverage at times as well, similarly to how they used Brian Burns in 2020.

While Reddick never flashes a huge amount of zone upside when playing off the ball in Arizona, he has the range to drop into intermediate zones effectively:

As well as the speed to run vertically with most tight ends and running backs in man coverage:

And while it’s probably unlikely that he spends a ton of time in the slot in man coverage in Carolina, he did at least show pretty good movement skills and a nice ability to contest at the catch point:

Possibly more relevant for the edge role he will primarily play in Carolina, he does a really good job of reacting to motion to his side of the field to take away options in the flat:

Reddick shouldn’t be used as an off-ball linebacker in the NFL on a consistent basis, but he has the range and movement skills to drop into coverage at times and could be a useful piece for what the Panthers look to do in obvious passing situations. 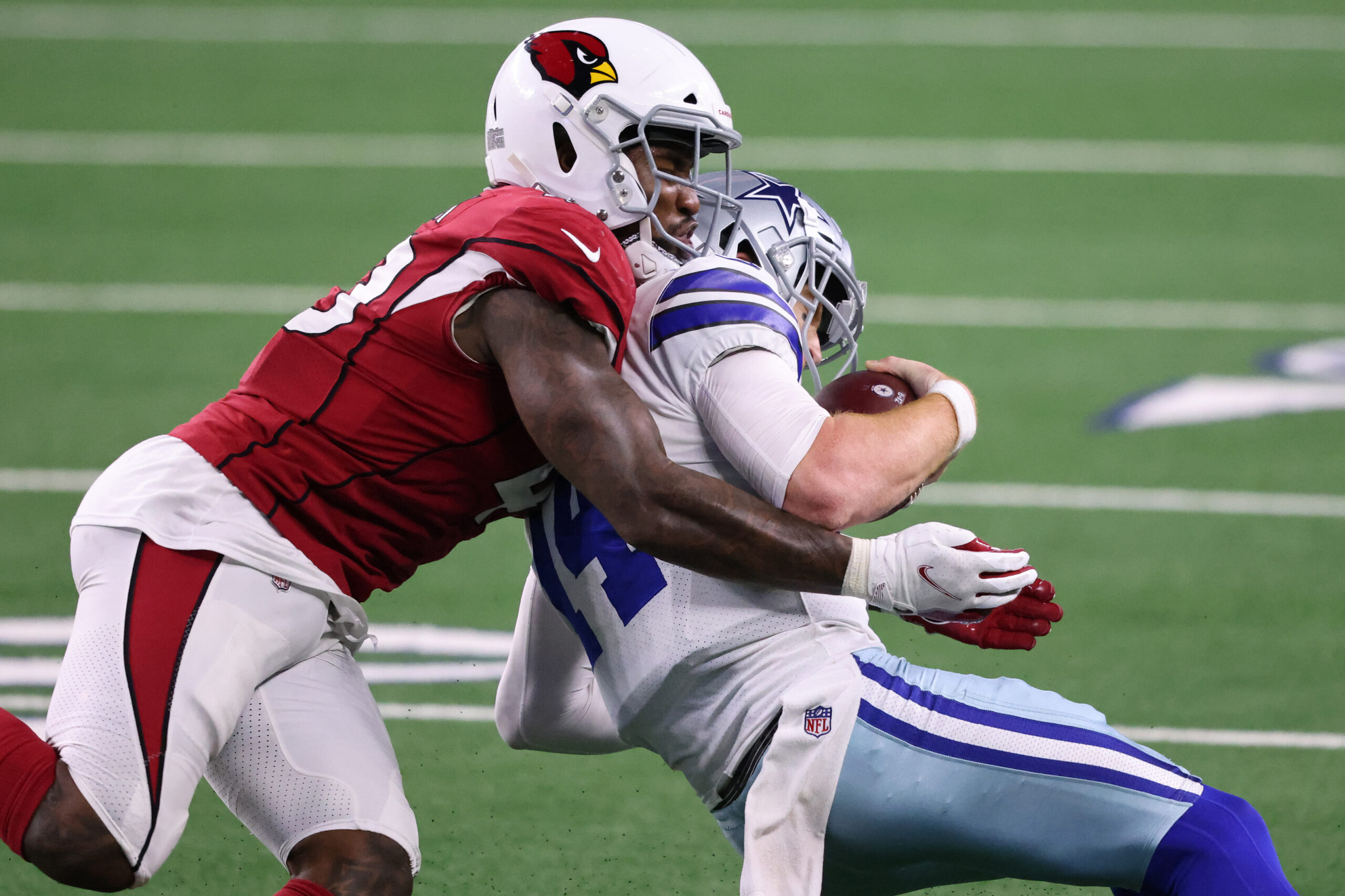 ARLINGTON, TEXAS – OCTOBER 19: Andy Dalton #14 of the Dallas Cowboys is sacked by Haason Reddick #43 of the Arizona Cardinals during the fourth quarter at AT&T Stadium on October 19, 2020, in Arlington, Texas. (Photo by Ronald Martinez/Getty Images)

Given that Reddick has excelled as a stand-up rusher, it seems highly likely that the Panthers will spend more time in 3- or even 2-man fronts than they did in 2020, but this will ultimately continue to be a multiple defense that looks to given different looks both during games and over the course of the season – in combination with Brian Burns, Reddick can be a really useful part of that.

Given that he has signed a one year deal, if he performs at an elite level in 2021 it will create problems for the Panthers in terms of finding a way to retain him while remaining under the cap long-term, but those are good problems to have. Matt Rhule said at his end-of-season press conference that he wanted to upgrade the pass rush, and this move does exactly that.