Film Room: Inside Will Grier’s Performance Against The Ravens 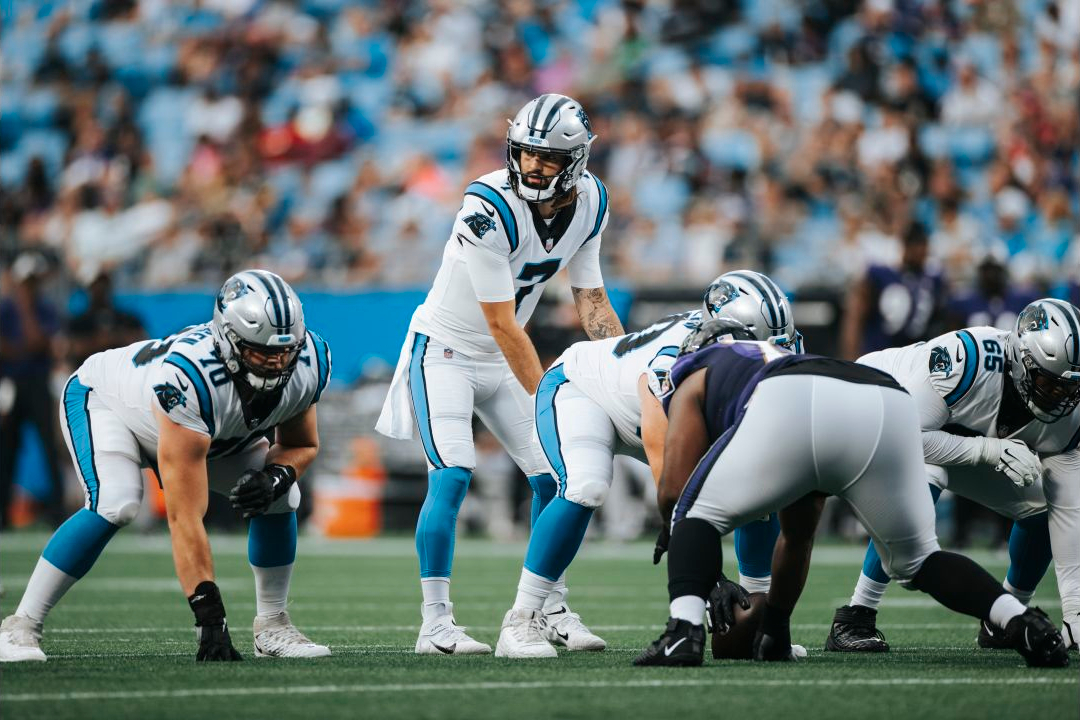 It’s been a week in Charlotte, hasn’t it? Well, at least in terms of the Panthers’ back-up quarterback race, where the roles from the first week were reversed as while PJ Walker struggled to make any positive impact with the third string, Will Grier put together a strong, if largely unspectacular performance against the Ravens.

Completing 11 of 14 passes for 144 yards, Grier was able to revive his chances for the back-up spot and the resultant roster spot, but in order to get a better grasp of how his play might impact the race, we need to take a look at the tape. 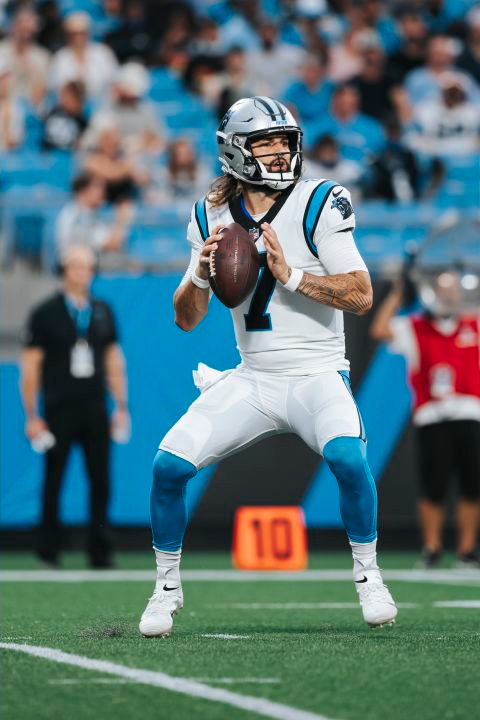 As evidenced by the three incompletions, Grier didn’t have much in terms of missed connections with his receivers so it shouldn’t be too difficult to go over the ones that were off. This one to Brandon Zylstra is a bit tricky because it’s almost where it needs to be but is simply just too high.

Zylstra runs a simple go route just outside the numbers, and with tight one-on-one coverage from the slot corner, this needs to be placed on the receiver’s back shoulder. Instead, the throw sails on Grier and is a bit inside, and it’s just not close enough for Zylstra to snag.

On this next play, Brady calls a play which has two receivers clog up the defense to free Ishmael Hyman on the outside, only for an apparent miscommunication leading to an incompletion:

It appears as though Grier anticipates Hyman running a dig route instead of the full wheel route that’s actually executed, with the only other option being a concerning underthrow. It’s hard to know exactly who is at fault without knowing the details of the play call, but the route that Hyman ran would make much more sense than the throw that Grier made.

Lastly, let’s take a look at the final incompletion on the night from Grier. This is a simple out pattern from Omar Bayless and perhaps a play that shows concern on how Grier scanned it.

From the beginning, Grier locks on Bayless right as the ball was snapped instead of looking off one side of the defense. This invites defenders into a party they weren’t invited to, as they can sense when and where the ball will be placed which in this case leads to an incompletion to Bayless on third down.

With the incompletions out of the way, let’s focus on some of the good stuff. 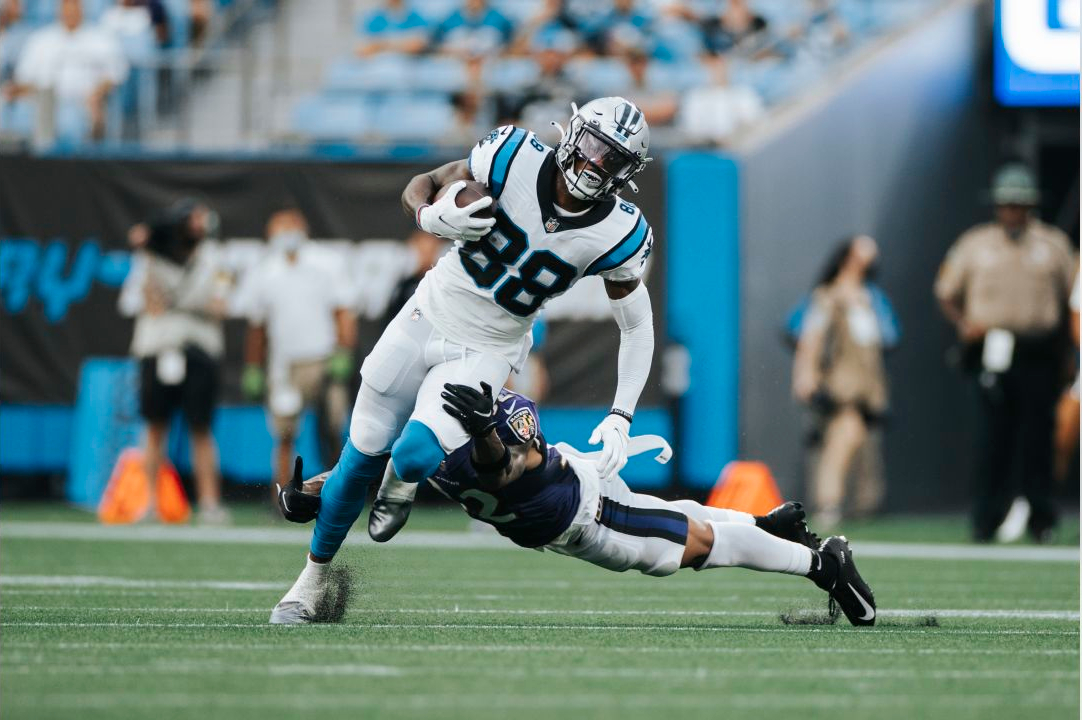 This next play was the highlight play from Grier’s performance, a third down rainbow to Terrace Marshall Jr. to start the second quarter.

With a pocket giving him just enough time on the three-step drop, Grier lays this exactly where it needs to be a tight window, just over the DB’s head and into the mittens of Marshall. While Grier doesn’t have elite arm talent, Grier’s ability to drop the ball into vertical windows using touch was his biggest plus as a prospect coming out of West Virginia and this play is an example of what that can allow him to do at times.

While a lot of the heavy lifting on this next play was done by Joe Brady in designing the play, Grier is able to put the ball where it needs to be in order to pick up the first down with a completion to Shi Smith.

Brady has the Y receiver across from Smith run a shallow crosser, clearing up space over the middle for Smith. The Ravens run a fire zone blitz here, dropping two defenders back, one of which is No. 6. As it is zone, he’s not aware of Smith running across the field, so this is the perfect play call for this kind of defense. Grier doesn’t have to do anything special here, but consistent execution of an offense is a major part of being a back-up quarterback. 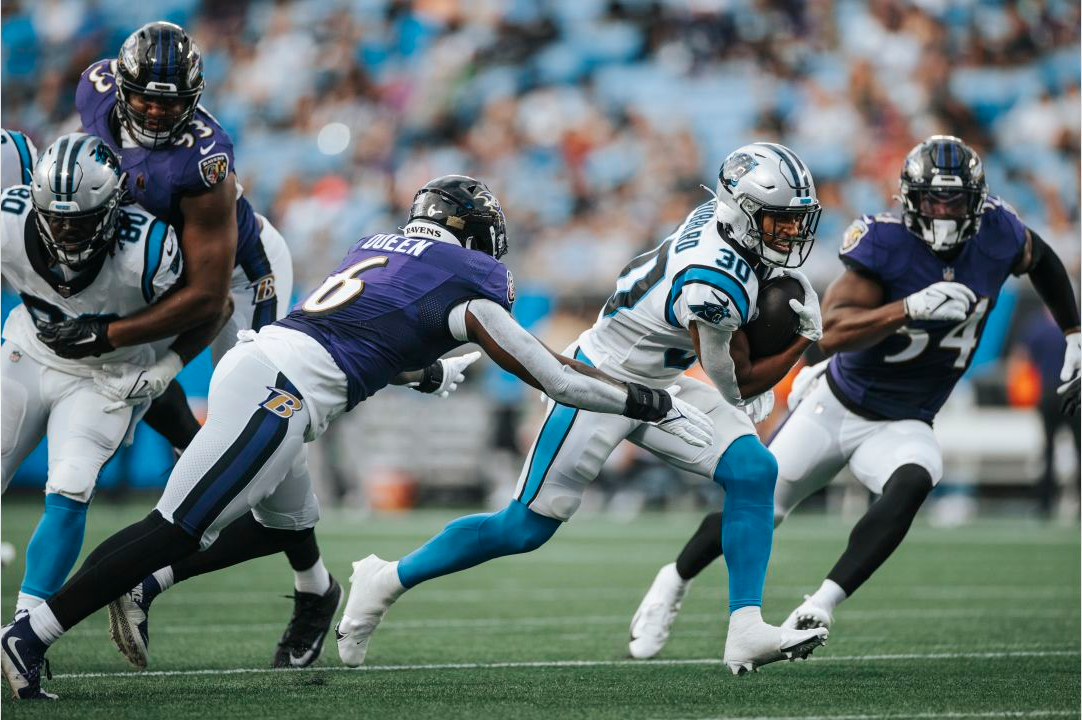 Overall, Grier was notably more conservative than PJ Walker was against the Colts though, while he did benefit from a fair amount of schematic assistance in places, this was in part necessary due to the offense’s complete inability to run the ball throughout most of the game.

Walker likely continues to be the favorite in the competition, but their respective play against the Ravens has certainly narrowed the gap between the two.