Film Room: Is Christian Darrisaw A Sleeper Pick For The Panthers 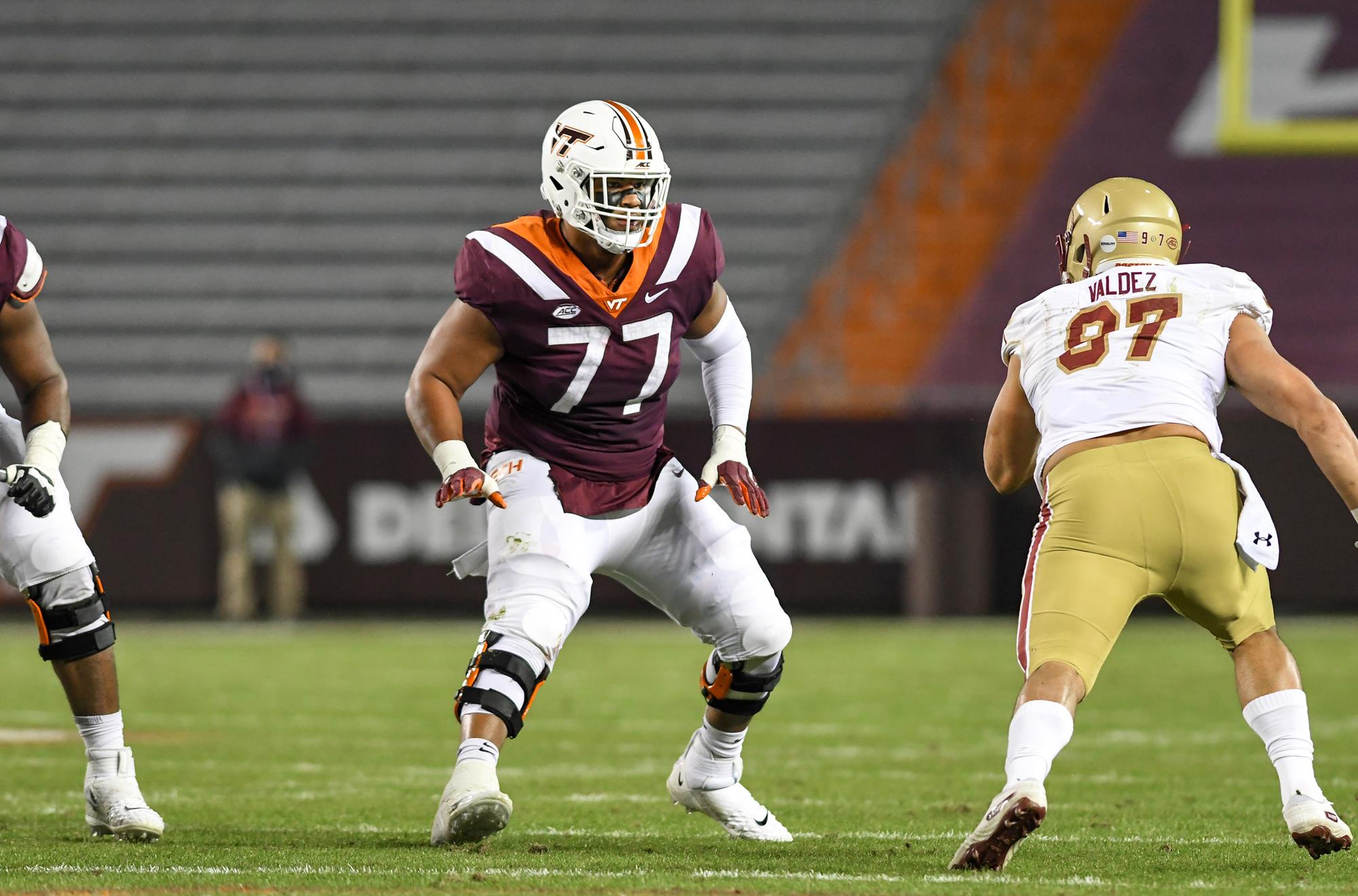 The Panthers have been linked with a lot of players so far in this draft process, and with their need at offensive tackle a lot of attention has naturally focused on Penei Sewell and Rashawn Slater with the eighth pick. However, one offensive tackle prospect who hasn’t got as much attention in terms of being a top ten pick is Virginia Tech’s Christian Darrisaw.

Darrisaw also fulfils one criterion that Scott Fitterer mentioned when talking about what they look for in offensive tackles, namely arm length, and at 6’5 and 322lbs with 34.25″ arms he has the size and length to fulfil any team’s prototype. So, what does he show on tape, and could he be a serious option for the Panthers in the first round? 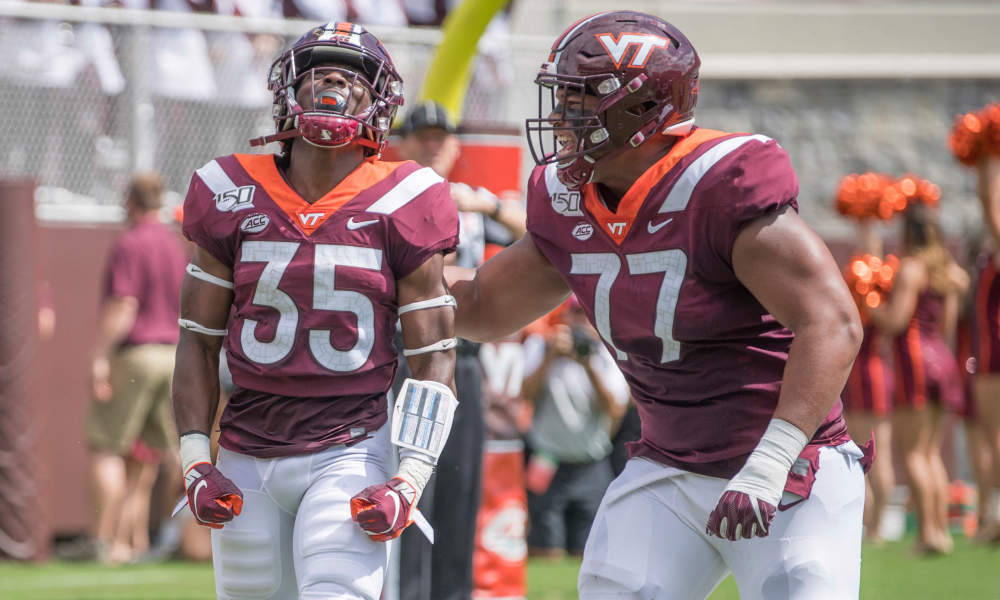 Starting with pass protection, Darrisaw has the foot speed to cover speed rushers around the edge:

And on the whole does a good job of keeping his weight over his feet to allow him to mirror rushers laterally:

He can sometimes be a little guilty of stopping his feet which creates some vulnerability to hesitation moves:

And while he generally plays with very good knee bend be needs to make sure he does narrow his base unnecessarily as this makes it hard for him to recover laterally:

And he absolutely has to avoid crossing his legs as this can cause real issues with balance:

However, these issues are not persistent ones on tape but rather indicative of a need for greater technical discipline at times. His footwork is generally very good with just a few plays where he seems to get a little complacent and falls back on letting his athleticism do the work, which will he harder to do consistently at the NFL level.

He can also be a little guilty of oversetting at times, but this is not as major an issue as it was for Greg Little coming out or even for Penei Sewell in this draft class, and his balance and controlled meant that when it did happen, he was generally very effective at recovering swiftly:

In terms of footwork in pass protection then, while there are some things to clean up from time to time, he is generally very balance with good lower body flexibility and foot speed.

Where he can let himself down at times in pass protection is his hand usage, and whereas for many prospects this is the result of balance issues stemming from their footwork, for Darrisaw it seems to simply be a matter of technical discipline. He has a tendency to let his hands drop and get quite wide in his sets:

Which then makes it hard for him to locate his hands and allows defenders to crowd him and inhibit his arm extension:

This shouldn’t be the hardest thing to fix as there doesn’t appear to be any physical limitation here (in fact he has really very long arms), but he does need to be more disciplined as this creates troubles for him that don’t need to be there.

On the plus side, he is able to add value as a blocker out in space, and any scheme that asks him to get out in space on screens is going to really appreciate both is movement skills and control:

In pass protection, Darrisaw has the ability to be extremely good, and if he can continue to improve the discipline of his technique then he has a chance to be that sooner rather than later. He isn’t perfectly polished, but he is more than just a good athlete. 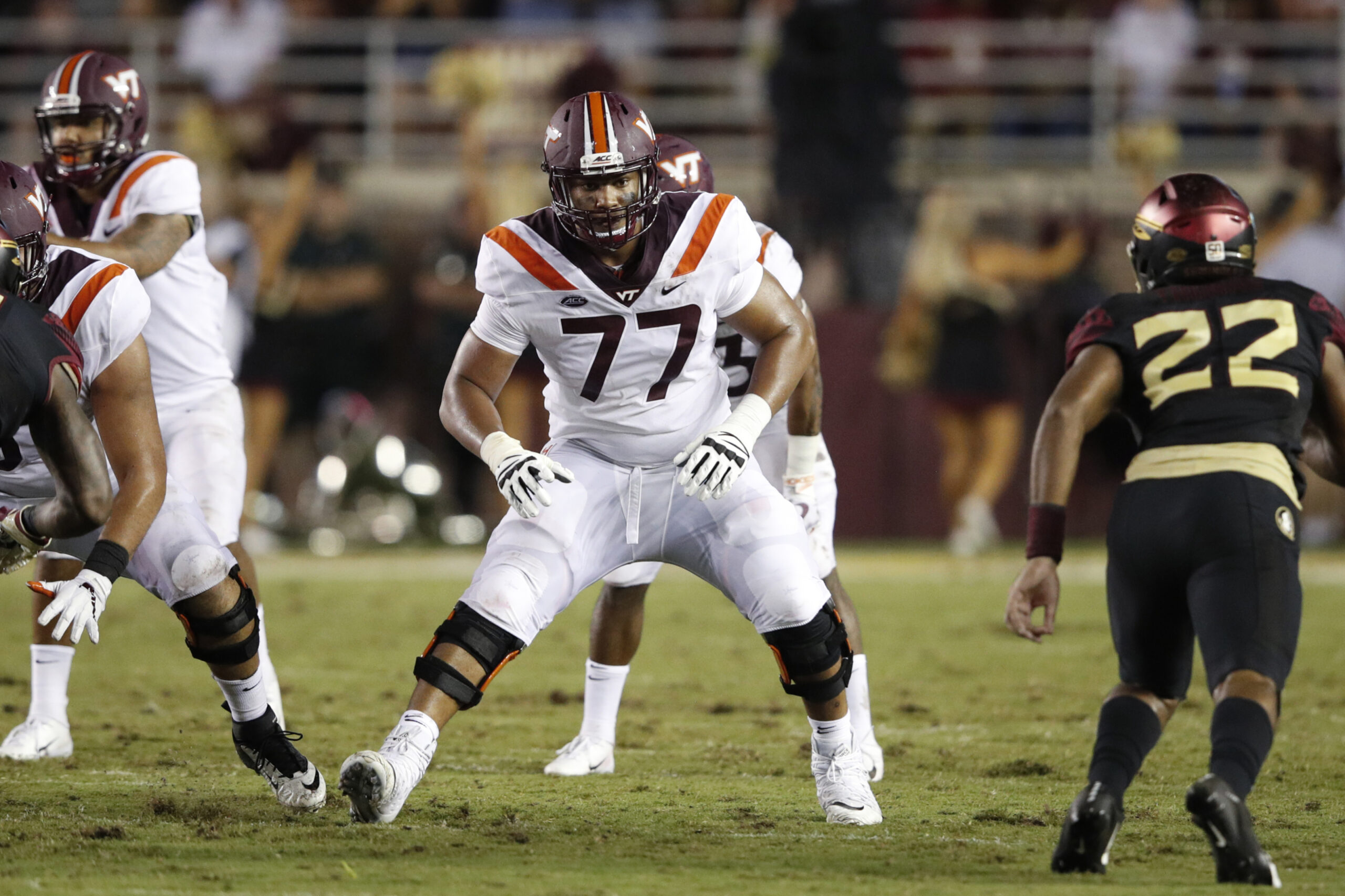 As a run blocker, Darrisaw wasn’t asked to bulldoze people off the ball a lot of Virginia Tech, and while he shows good power:

How he would far in a scheme that asks him to do that regularly involves a little bit of projection. However, in a scheme like the Panthers, his agility and balance would be extremely useful in working laterally to create rushing lanes:

However, he can be a little guilty at times of straightening his legs, especially when looking to generate push, and this leads to both a loss of effective power and also a loss of control:

This isn’t the end of the world but, given how good he shows his pad level can be at times, it can be frustrating when he doesn’t always perform to that same standard. 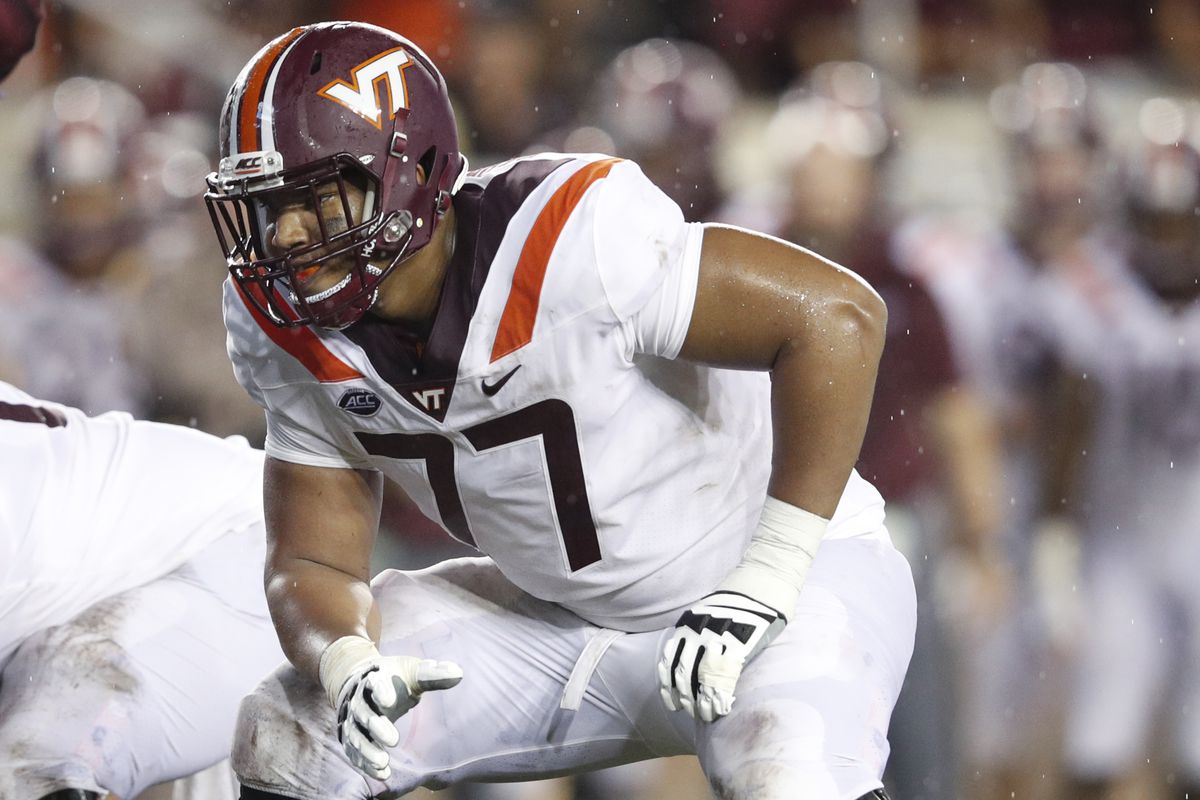 However, as in the passing game his biggest limitation is his hand usage, though here the issue is even more pronounced. That is not to say that he doesn’t show an ability to locate his hands well:

And he does show an ability to fight to reset hands when he isn’t able to get initial location:

But he again plays with consistent quite wide arms, which leave his frame exposed and make it hard for him to direct and effective punch to the frame of defenders:

And this leads to frustrating plays where his footwork gets him into a good position only for him to completely whiff on the block because he can’t secure the block:

However, as in the passing game, he can also make impact out in space, working to the second level well to make blocks on linebackers and safeties:

He also shows a nice understanding of how to block with leverage even when pulling, such as here where he works around the corner but then sets his feet to seal the rushing lane outside:

Though he does need to make sure not to narrow his base as this can lead to issues controlling blocks:

Darrisaw’s run blocking is not currently at the same level as his pass protection, and he does need to continue to improve in this regard, but he shows all the tools needed to be an effective run blocker he just needs to improve the consistency of his technique. 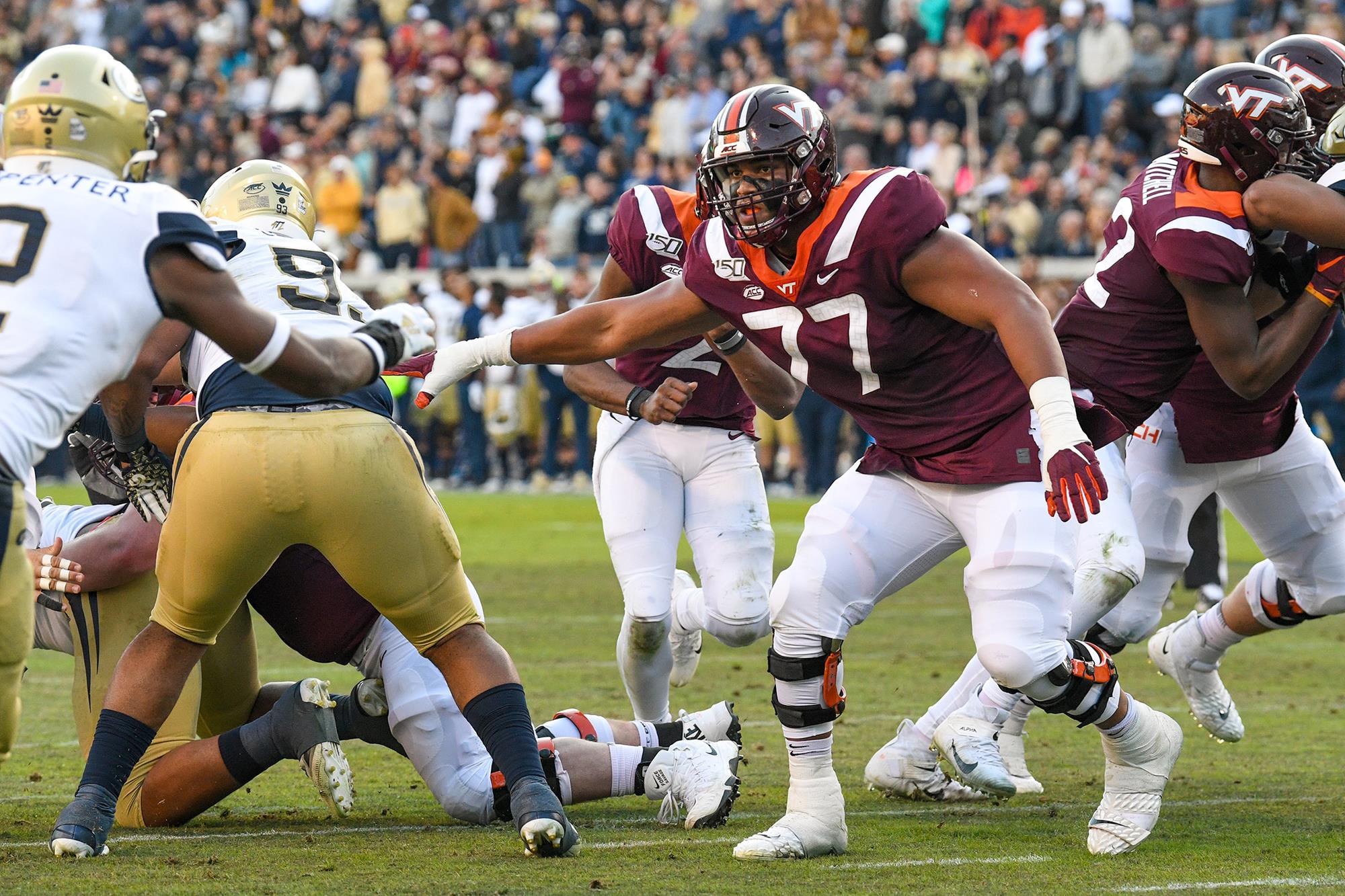 Overall, Darrisaw shows an awful lot of very good things and his ceiling is that of an elite tackle in the NFL. He does need to improve his hand usage, but this should be an easier thing to coach than an issue with footwork and, given the foot speed and balance he shows in both facets of the game, this doesn’t appear to be the case.

For the Panthers, he might not be guaranteed to start week one at left tackle, but he has as good a chance of being a high-quality starting tackle as a rookie as anybody in this class with a ceiling as high as any tackle not named Penei Sewell. He isn’t currently being talked about much as a top ten prospect, but if the Panthers are able to trade down into the early or even mid-teens then he should absolutely be somebody they consider.