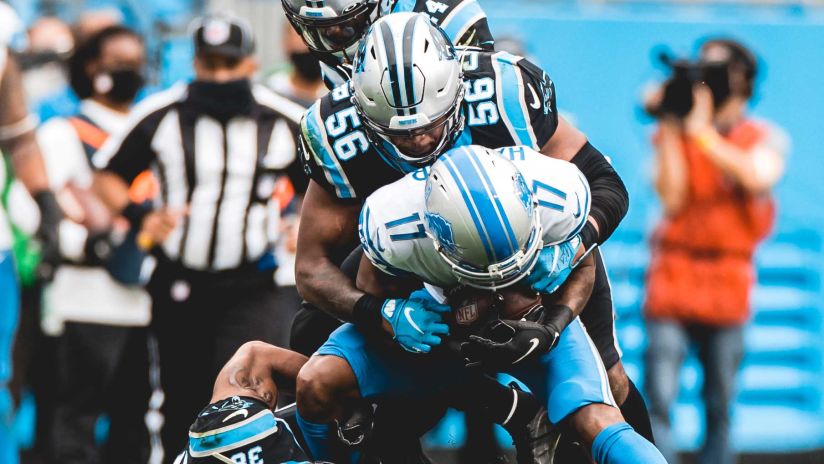 Tahir Whitehead has been the subject of a fair amount of criticism so far this season, and while he has largely been the same player he has been throughout his career, with the veteran linebacker struggling with a rib injury, the Panthers turned to Jermaine Carter in his place against the Lions. With that move, they gave us a chance to see what Carter can offer them – and crucially, whether he could be a viable partner for Shaq Thompson at linebacker moving forward.

So then, what did we see from Carter against the Lions, how could he improve further and how could he fit into the Panthers’ future plans?

The Panthers use Jeremy Chinn an awful lot as a pure linebacker in passing situations – so the role of the #2 LB in Phil Snow’s defense is going to be slanted towards the run game. One thing that stood out positively in this regard right from the start was Carter’s ability to impact the game as a pursuit defender from the back side. On the very first play of the game, he was able to shoot the B gap and chase the play down from the back side with the help of stout front-side defense – and a great angle by Jeremy Chinn:

And while on this next play, he didn’t end up making the tackle, he was able to force the ballcarrier wider and into the arms of waiting defenders:

He also seemed to do a nice job of anticipating these outside runs, which Carter attributed to how much tape he had watched on the Lions as he prepared for the game; while there is always some risk when you start guessing pre-snap, if this is indeed more than just guesswork, it is a really good sign:

He also executed at a really high level (albeit in a limited sample size) in terms of adjusting to motion and pulling blockers; this is an area the Panthers have really struggled with so far this season. While these are really not super complex things for a player to get right, being able to do the simple things consistently is a really significant part of being an effective player.

Here, the Lions pull a guard with Carter on the back side – and he loops around to fill the gap inside the pulling blocker and make the tackle. This was Carter’s favorite play of the game.

“I had a run fit where I knew exactly where I had to be and when I had to be there,” he said. “It was a play where I had to check two different gaps and just do my job. I did my job at a high level and I was able to get Adrian Peterson down on the ground.”

And while here, the play got blown up up front by YGM, Carter was in great position to make the tackle if the ball had got outside YGM after he started to peek inside. It’s also worth noting the really nice subtle shoulder fake Carter runs to get the center to commit to the block before slipping outside of him, thereby taking a blocker away for those pursuing behind him:

The one area where he could stand to improve as a run defender is in how he uses his hands to work off blocks – on this play, he doesn’t really get his arms located and extended early, thus allowing the blocker to swamp him somewhat:

On this next play, he does a slightly better job and at least manages to avoid getting swamped, but the contact still slows him down a fair amount – making sure he is getting consistent hand placement and keeping his arms extended would help him to keep himself alive in plays when he is unable to work around blockers to the ball:

Overall, Carter did a really nice job defending the run against the Lions.

While his somewhat inconsistent technique at working off head-on blocks might show up more in a negative sense when facing teams with more of a downhill rushing attack, this is something that can be worked on – his instincts and gap integrity were consistently good, allowing him to make easy plays when the offensive play was unable to force him into bad positions.

As already mentioned, the Panthers often didn’t have Carter on the field in obvious passing situations against the Lions – this linebacker position on passing downs normally goes to Chinn. Carter didn’t get the most thorough of testing in coverage on Sunday, and given that they played zone almost the entire game, there is also a limit to what can be said about his potential ability in man coverage based on this one game.

However, he showed some nice awareness in underneath zone, a key for playing linebacker in the Snow defense. This is exemplified on the following play: he keeps the tight end in front of him across the field, and having passed him off on the drag route. motions out to take away the pass when the tight end then sits between the zones. Carter then drops deeper to take away the pass to the receiver who works behind him:

Nothing he does here jumps off the screen in terms of instincts or athleticism, but in a scheme that asks the linebackers in particular to do a lot of work against underneath combinations in zone, the ability to work with your face to the quarterback with a nice feel for how routes are evolving around you is a valuable skill set.

However, one of the Lions’ biggest plays of the game is also worth considering. While it’s hard to say exactly whose responsibility this was (given how Burris is immediately reacting back to the outside zone, he would be my first guess but I can’t know for sure), it would have been nice to see Carter recognizing the man running free past him and look to take him away, even if players trying to be a hero and freelancing like this can also lead to even greater issues:

But, as in the run game, he showed a nice understanding of what his responsibilities are with respect to blockers on screens and the like while doing a nice job of pursuing to the flat to clean up plays from the back side:

And finally, while it is always a bad idea to get too carried away on one play, here he does a really lovely job of keeping leverage as he works to depth before breaking really well – and with good control – to take away the route:

Carter is almost certainly not going to fare well if asked to consistently play against receivers in the slot, but that really isn’t what this defense asks linebackers to do – while he will almost certainly have to play some man coverage down the road, if he can be at least decent in this regard, Jermaine Carter can be a very useful piece of this defense.

As any 25-year old in his first year in a new system, he does have things that he needs to continue to improve on going forward – but in the role the #2 linebacker is asked to play in this defense, he has the skillset to be effective.

The Panthers would be wise to run with him for the remainder of the season to gauge what importance should be placed on the position over the offseason – but if he can replicate the performance he had on Sunday, they certainly seem to have found a linebacker that can contribute.