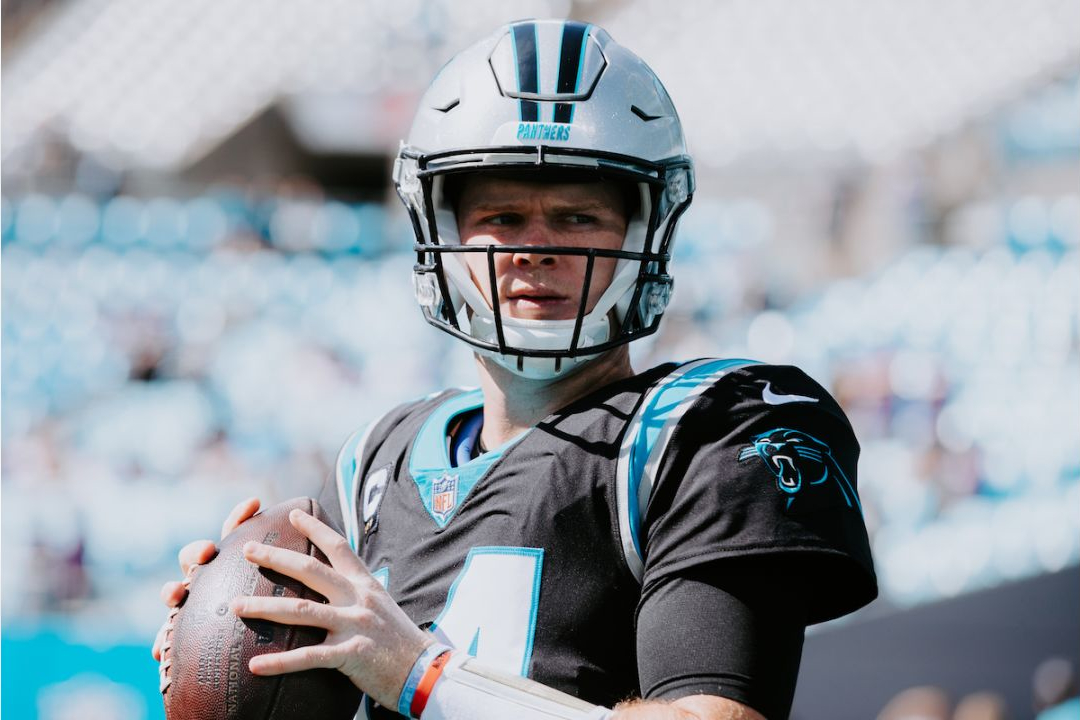 Going from 3-0 to 3-3 absolutely sucks. Despite a promising start to the 2021 season, admittedly against a somewhat gentle schedule, the Panthers have struggled to take advantage with three straight losses, the last two of which have been particularly hard to bear. Though there has been a lot of blame to go around regarding this, Sam Darnold has certainly borne the brunt of it.

Despite only being the Panthers’ quarterback for six games, having been brought in as a possible upgrade over previous, post-Cam Newton passers, to this point the Panthers certainly seem to have done a lot of work to end up roughly where they started. In order to get a better idea of what is going wrong for Darnold, and how that could potentially be corrected or at least improved upon, we took a look at this tape against the Vikings to find out more. 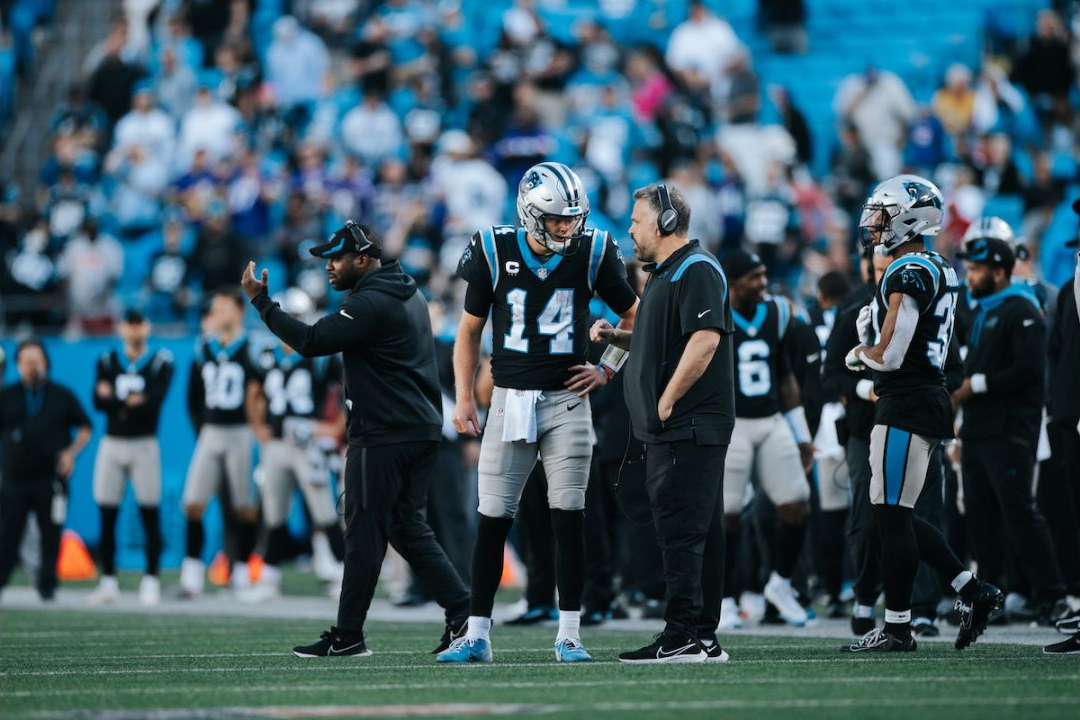 Against the Vikings, Darnold started out 5 of 17 for 60 yards and an interception. You know how you’re able to recognize a good statistical performance? This was not one of those. In fairness, the day was wrought with drops from Sammy’s receivers, some worse than others.

Let’s start with this uncharacteristic drop from D.J. Moore, who had a couple of these against Minnesota. On a 3rd-and-long this pass would possible have been ever so slightly short of the chains anyway (plus Matt Rhule has been pretty conservative going for it on 4th downs), but this is a well thrown dart to the slant route that Moore has to haul in.

He’d have a split second to react to the high safety in time, but he’s been known to make these catches consistently.

Here we have another 3rd down misstep. Darnold puts this in Robby Anderson’s hands, but the receiver turns out a tad prematurely, taking his eyes off the ball and allowing it to fly loose from his hands.

The frustrating part is not only did Joe Brady do a great job of using the route combination to create separation for Anderson’s shallow crossing route, but Anderson historically has the speed needed to reach the first down marker on these plays. Just another instance where a would-be-promising drive was left on the field.

On the game tying drive, Moore appears to let another tight window pass slip through his grasp.

Darnold’s placement on this back shoulder toss from his own end zone is sublime, and again this has to be snagged in by the usually reliable Moore.

However, even with these passes, it can be easy to forget the Panthers had once trailed 28-17 due to an ugly attack where Darnold was partially responsible. 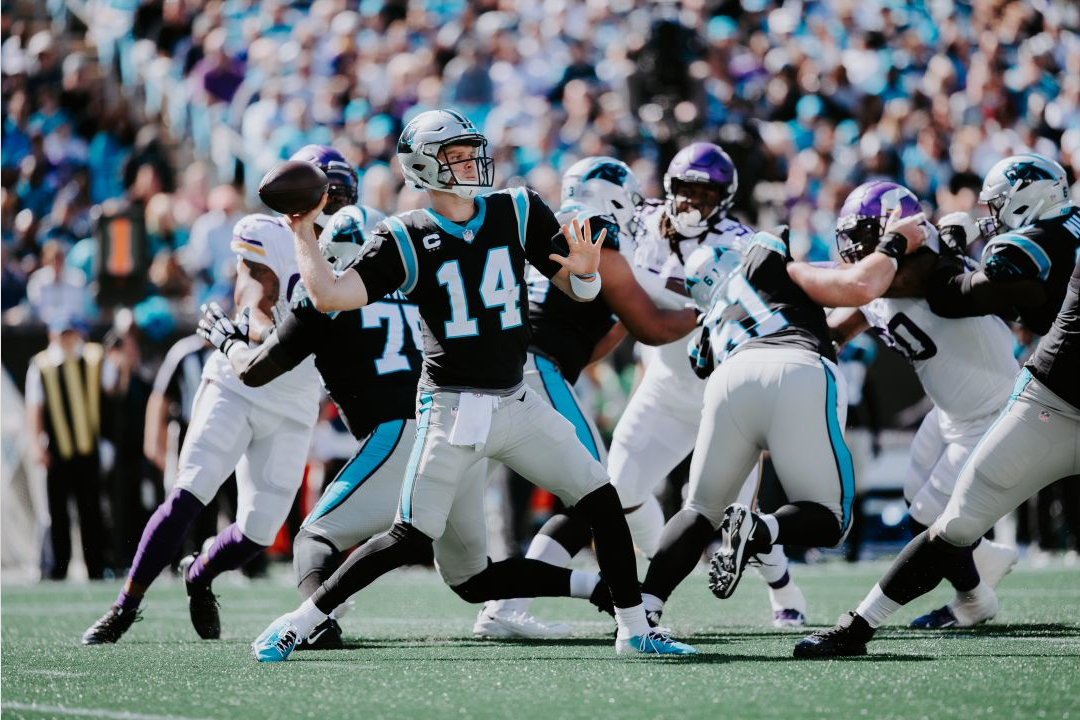 The offensive line has been bad for sure, but Darnold was brought in to elevate the offense beyond any inconveniences, yet it’s been an inconsistent display instead. On the day, Darnold completed just 17 of 41 passes for 207 yards, a touchdown, and an interception. 24 misses do not make for a good time, and even with the drops being a factor, the quarterback was still keeping the Vikings in the game and on top with mistake after mistake and miss after miss.

Right from the first play from scrimmage we’ve discovered disaster. For whatever reason Darnold either does not see the corner right next to the receiver he’s trying to throw to across the field or he thinks his arm is powerful enough to line it up on a rope. On this play it’s not.

This should’ve been thrown away and there was absolutely no excuse for this to be attempted.

A little later in the game, Darnold nearly gets punished with another interception on the slant pattern pass to Robby Anderson.

It’s impossible to tell whether he just didn’t see Eric Kendricks or if he thought his arm could sneak this bullet over the linebacker’s head, but he’s lucky to have escaped without throwing his second pick of the day.

Frustratingly, as well as times like these where Darnold tries too hard to make a play happen, there were times where it seemed he didn’t try hard enough. Here we have a really good wheel route from the rookie tight end Tommy Tremble, who’s been involved on a few of the Panthers’ scoring plays this season. It appears that Darnold is looking to launch this down the sideline to Tremble, that is until Matt Paradis can’t contain pressure any further, scaring the quarterback from making the throw.

A tight throw like that isn’t easy to make to a rookie tight end, but even with the pressure caving in, but he should have at least given his guy a chance.

This is the point where I start to tear my hair out.

Down 8 on the second to last drive of the game and you have a great chance to tie the game up, Anderson is left without any kind of resemblance of tight coverage on this corner route to the back of the end zone, and Darnold’s vision just won’t let him see his former Jets teammate. Instead of connecting in the back of the end zone, he has to throw this away because he wasn’t able to locate an open Anderson in time.

These plays illustrate that, while the comeback was impressive, it was a comeback that was required in large part because of missed opportunities from quarterback to receiver. And that’s the frustrating part. We know Darnold is capable of high-end plays, we just don’t know when he’ll execute them. 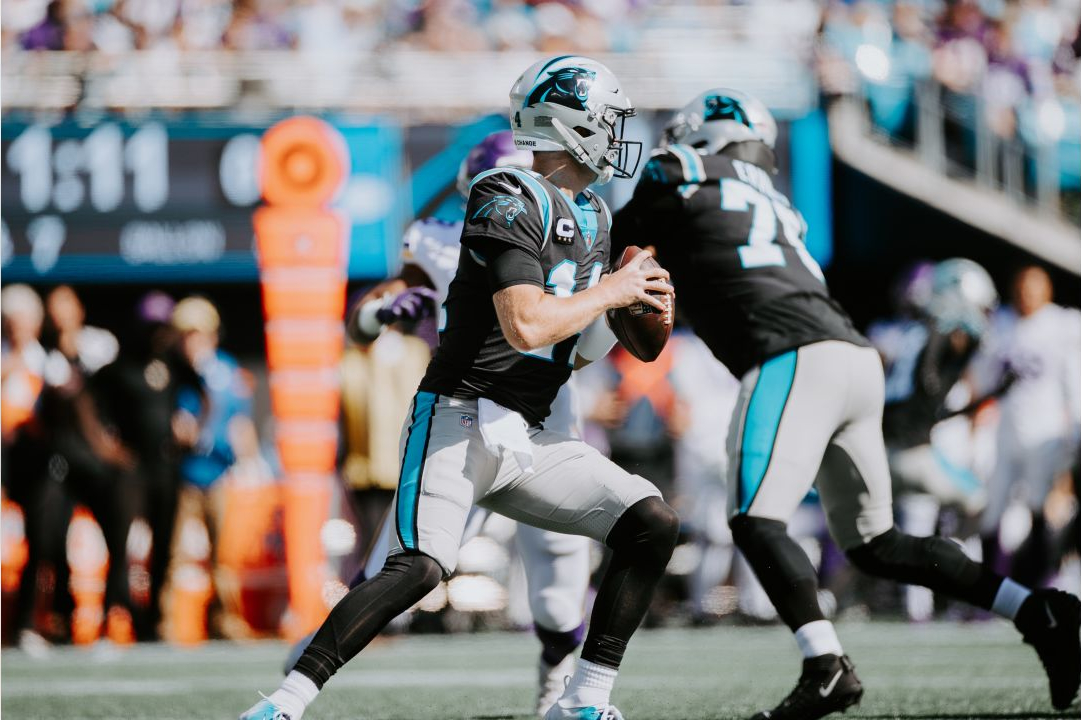 Here’s a more positive example, Darnold is able to recognize zone coverage thanks to a little pump he uses to hold corner Mackenzie Alexander (No. 24). Keep track of the inside linebacker as well; Darnold moves him with his eyes to create an open lane across the middle for Brandon Zylstra on the simple go route. It’s a brilliant display of quarterbacking that keeps this drive alive and makes this play look easy.

Darnold saved his best throw of the day (and quite possibly the season) on a critical 4th down convert or go home situation. There’re four defenders around Ian Thomas as this is about to land in his area. This can’t be floated; it has to be zipped in.

Fortunately, Darnold rips a fastball 35 yards in the air between this gauntlet of defenders. I’d question why this hadn’t come before, but we’ve got a comeback to make, so there’s no time for that. Darnold’s always had a quality arm cannon, and his ability to rip it into tight windows and off different platforms was part of the appeal that made him an enticing prospect back in 2018.

Next, Moore makes up for his previous sins by hauling in this rainbow from Darnold off his back foot.

Continuing the theme of a powerful arm, the ability to make this accurate deep throw off an awkward platform shows why the Panthers got him in the first place; They needed a guy that could do more than asked of, a guy that could make plays out of structure or fit it into less favorable windows.

That’s where this last play comes in.

This pass from Darnold is similar to the one where Eric Kendricks almost came away with an interception. This time, however, Darnold was able to gain the upper hand because his pass was high and fast enough to zip over the defender, and just low enough that Anderson had a shot at making a play on the ball. The result is a beautiful touchdown pass followed by a game tying two-point shovel pass.

If there were no positives with Darnold’s play then that would at least make things simples, but that just isn’t the case. 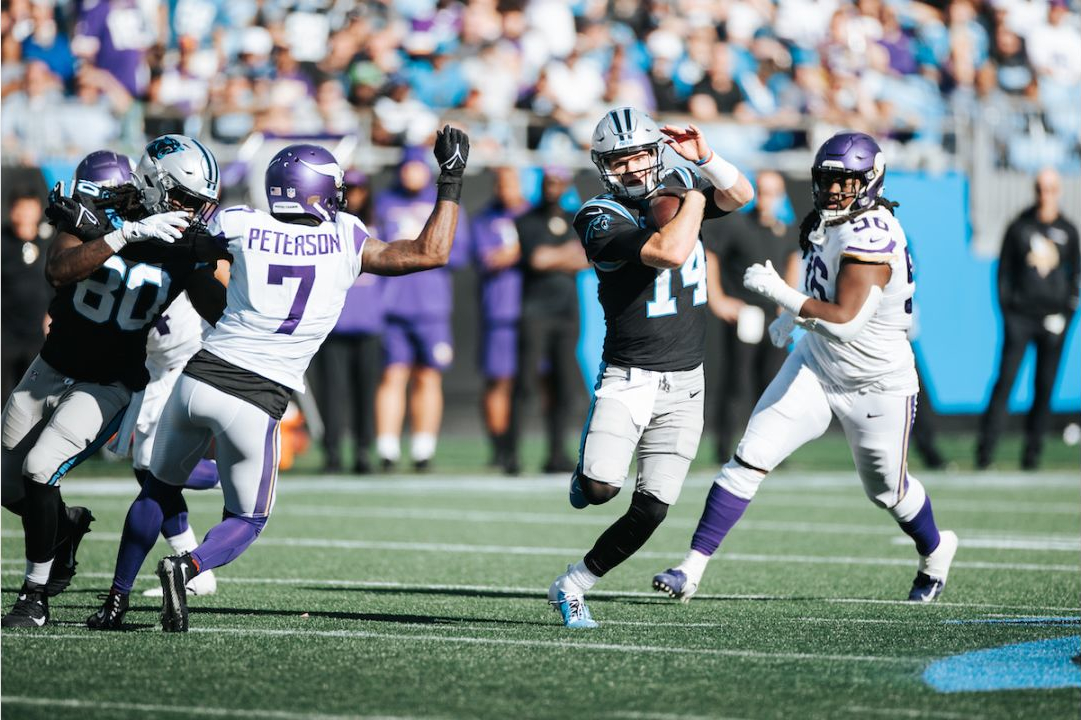 This is the Sam Darnold experience at its peak. Brilliant flashes of elite playmaking sugar coated inside layers of inconsistency. For all the bad Darnold showcased in this game, he was able to come back and almost erase these mistakes by forcing overtime. Unfortunately, that’s also vice versa, since Darnold’s costly decision making got the Panthers in that hole in the first place.

This has been a common theme in the Panthers’ losing streak. The defense has played well in each of the three losses, yet it’s somehow not enough. The quarterback is not completely at fault, as various coaching decisions, injuries, and poor protection are there as well. But Darnold can alleviate these troubles by playing better. In these last three games, Darnold is playing below average and is hurting the team as much if not more as he is helping them.

With the schedule expected to get harder as the season progresses, this is not what the Panthers wanted. If they want any chance at surviving and keeping pace in the NFC playoff race, they need more inspired play from Darnold, and they need it now.