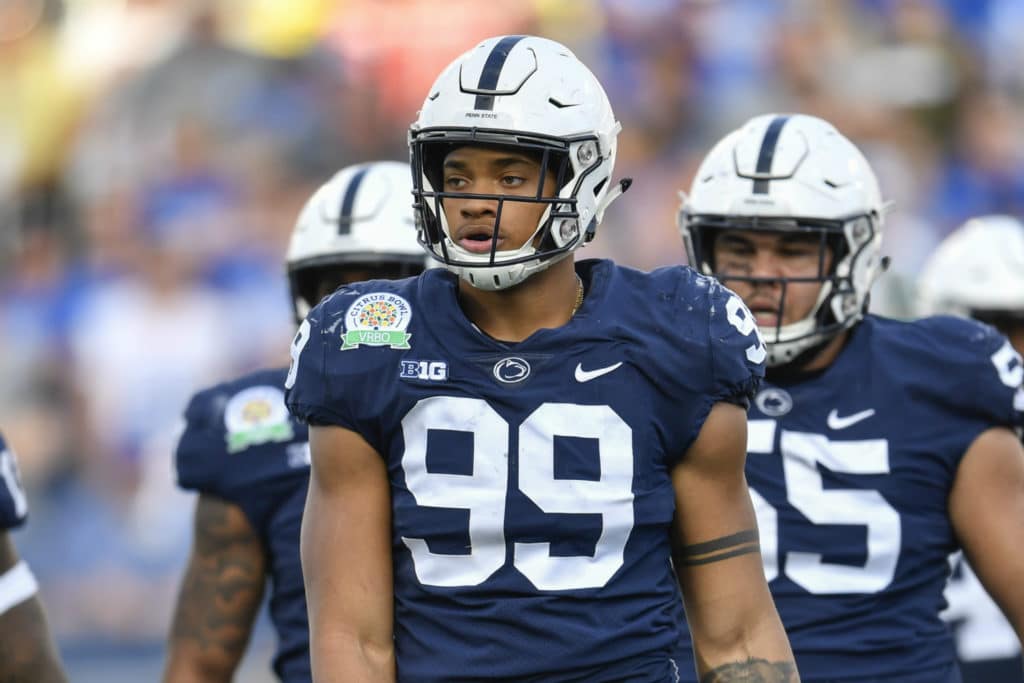 With the 38th pick in the draft, the Panthers selected Penn State defensive end Yetur Gross-Matos, looking to add further to their defensive line after seeing multiple departures in free agency. All that is well and good in terms of how he fits on the roster, but who is Yetur Gross-Matos the football player? Well, for that, we are going to have to examine the tape – and once we’ve done that, we can start to get an overview of a player Panther fans will be getting to know in detail over the coming months – and hopefully years.

For a defensive lineman in the modern NFL, the game has to really begin with pass rush, and for edge rushers in particular, this often means starting with their athleticism and ability to causes tackles problems around the edge with their speed.

While Gross-Matos does show the ability to get around the edge as a pass rusher (he wears #99):

His game is really not built around speed, at least not primarily, and while he can have some success in this regard, he is never going to be a player like Brian Burns who is able to get consistent pressure with speed alone:

However, he does show the bend to capitalize on outside leverage really well, with the core strength and flexibility to turn the corner and work back to the quarterback:

So then, Gross-Matos has the ability to turn leverage into pressure, the question then is how will he be able to generate leverage at the NFL level? The answer to that is with technique, and he does show this to a reasonably high level at times, doing a really good job of using his hands to work around tackles to create the outside leverage he can then capitalize on:

This is really valuable when he gets it right, as it allows him to create the threat of an outside rush and this can then be the basis for a more diverse rushing attack. He shows flashes of this as well, using his hands well to work into inside rushing lanes created when the tackle over-commits to stopping the outside rush:

As well as having the hand placement and sheer arm strength to counter back inside if he initially overruns the pocket:

And when working off of run fakes, he even occasionally showed the ability to locate his hands inside off the snap, and then stack and shed to the side to create rush when the run fake became clear:

However, as well as these flashes of some really quite developed pass rushing technique, there are also some areas that he does need to improve on – which even he readily admits. While he does flashes a number of nice pass rushing moves, some of these are still something of a work in progress, and there are times on tape where you can see what he is trying to do, it’s just not quite all coming together:

But the more persistent issue – and the most important thing for the Panthers to work on with Gross-Matos – are his inconsistencies in terms of pad level and arm extension, as there are times on tape where he gets far too upright in his rush and/or fails to get his arms up early in the snap, both of which will limit his power and make it far too easy for blockers to get their hands to his frame and block him out of plays:

This is definitely something that can be taught, but it also shouldn’t be taken for granted that this will be an easy fix.

If he can consistently get his pad level down and make more consistently good use of his nearly 35″ arms while continuing to polish his pass rushing moves, then he does have a chance to be a really effective, technical pass rusher. The other thing that is worth noting – that you might have noticed already – is that he was used both on the edge and as a 3-tech at Penn State (and very occasionally as a nose tackle). He should be able to have some success here, though here, his pad level and arm extension are likely to be even more important.

He does show flashes of both good interior pad level:

And nice hand usage on the interior, similar to what he did so well on the edge:

But improving the consistency of these two factors will be an important part of his continued development. Penn State did even drop him into coverage a few times as well, but it seems unlikely that this is going to be a major part of his game at the NFL level: