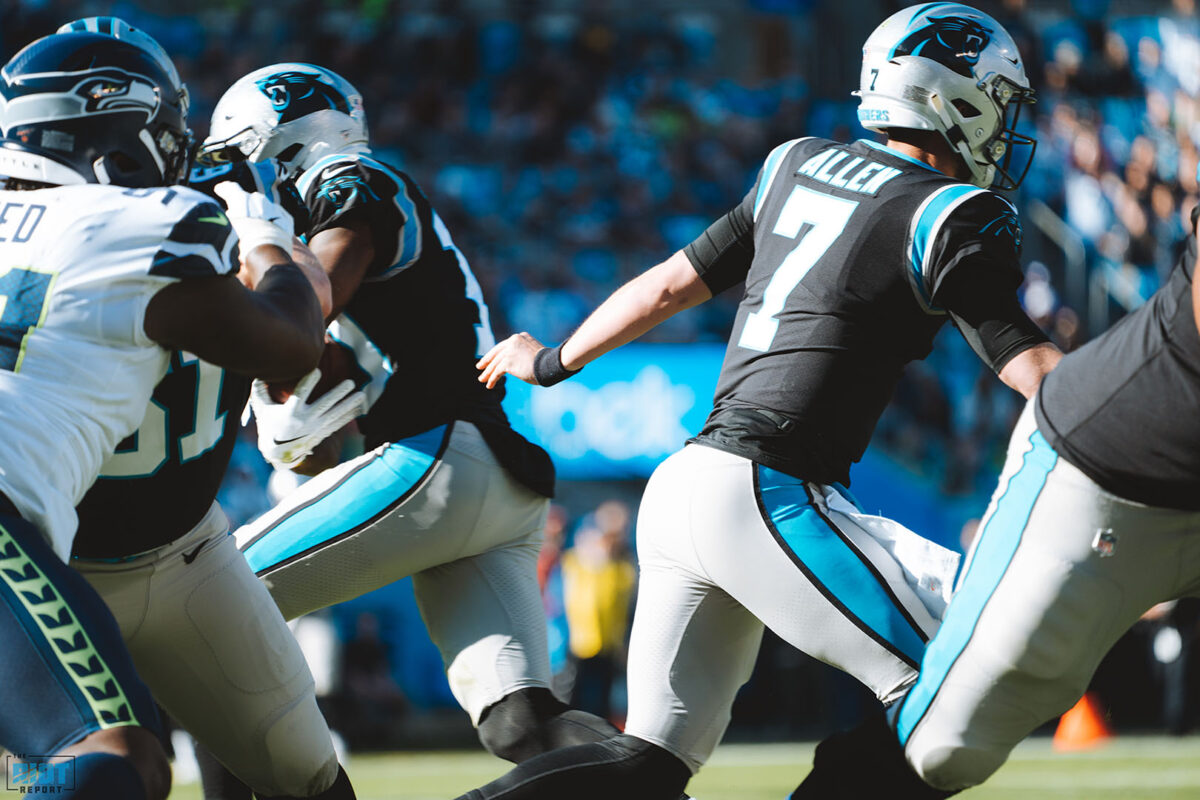 Now, it probably isn’t a surprise to anybody that one way to make life easier for a new quarterback like Grier is to run the ball a lot; frankly, this is something that coaches at every level of football have been doing for ages, but you do eventually have to throw the ball, and the following play – the only play where there was anything approaching a read for Allen – is a prime example of how to keep things simple.

The Panthers are essentially running a smash concept here, with the tight end offering a drop-down if the defense floods the flat and the Samuel motion stretching the defense horizontally and forcing them to continue to cover the whole width of the field while the nearside receiver looks to force safety help.

However, the read for Allen is very simple, assuming the backside of the play is covered normally – i.e. they don’t just leave Curtis Samuel wide open in the flat – Allen is essentially just reading the outside corner to see whether he goes vertical with the corner route or not, and when he does and the linebackers aren’t able to pursue to the flat in time due to the TE route, he is able to hit McCaffrey in the flat with a chance to run for a few more yards.

Having gotten far too close to running an actual passing play, the Panthers now go back to the jet motion once again:

This is really a very simple play, with the Panthers blocking down upfront and McCaffrey faking a run left in order to hold the second level defenders for a moment to allow the blocks to develop

The only other thing of real note here is how the Panthers doubled the frontside outside linebacker and left the 5-tech unblocked, giving Samuel a slower target to have to avoid if he does dive the jet. The rest of this play’s success is really just down to the ability of Samuel in space – this is something that he spoke about this week after the game; “whenever the play is called, I’m just trying to get out there and make a play out there. That’s where my focus is.”

Having run the ball every which way against the Seahawks on this drive, the touchdown itself was almost something of a formality:

Yes, the Panthers once again run a motion to try and keep the defense off-balance and to give the offensive line time to work to the second level, but this is essentially just hat-on-a-hat stuff down at the one-yard line, something the Panthers *ahem* struggled with for much of this season.

This drive was a great example in how you can take a few really simple concepts – jet motion, outside zone and inside trap plays – and by mixing around with the combinations and by playing around with some of the personal groupings, you can force defenses to be reactive – that always ends well for the offense. This was something else that Samuel spoke to, saying that the playcalling of Scott Turner aimed to “keep defenses off-balance, the different things that we do complements other stuff that we want to run. It definitely helps”.

The last two games of the season are really auditions for two people: Scott Turner and Will Grier.

For Turner, while he is unlikely to be named the head coach, he has a chance to continue as offensive coordinator beyond this year and for Grier, the next two games will do an awful lot to frame the narrative around him and the future of the Panthers’ quarterback group going into the offseason. Ultimately, they can both help each other; if Scott is able to mix up the run game and keep things simple for this quarterback the way he did on this drive, that will give Grier the best chance to be successful.

Similarly, while the younger Turner can call a great game, if Grier panics against pressure and throws a handful of ugly picks, most people won’t be talking about the clever use of jet motion – in the NFL, coaches and quarterbacks are often tied together, and there might be no clearer instance of this right now than the next two games for Will Grier and Scott Turner.