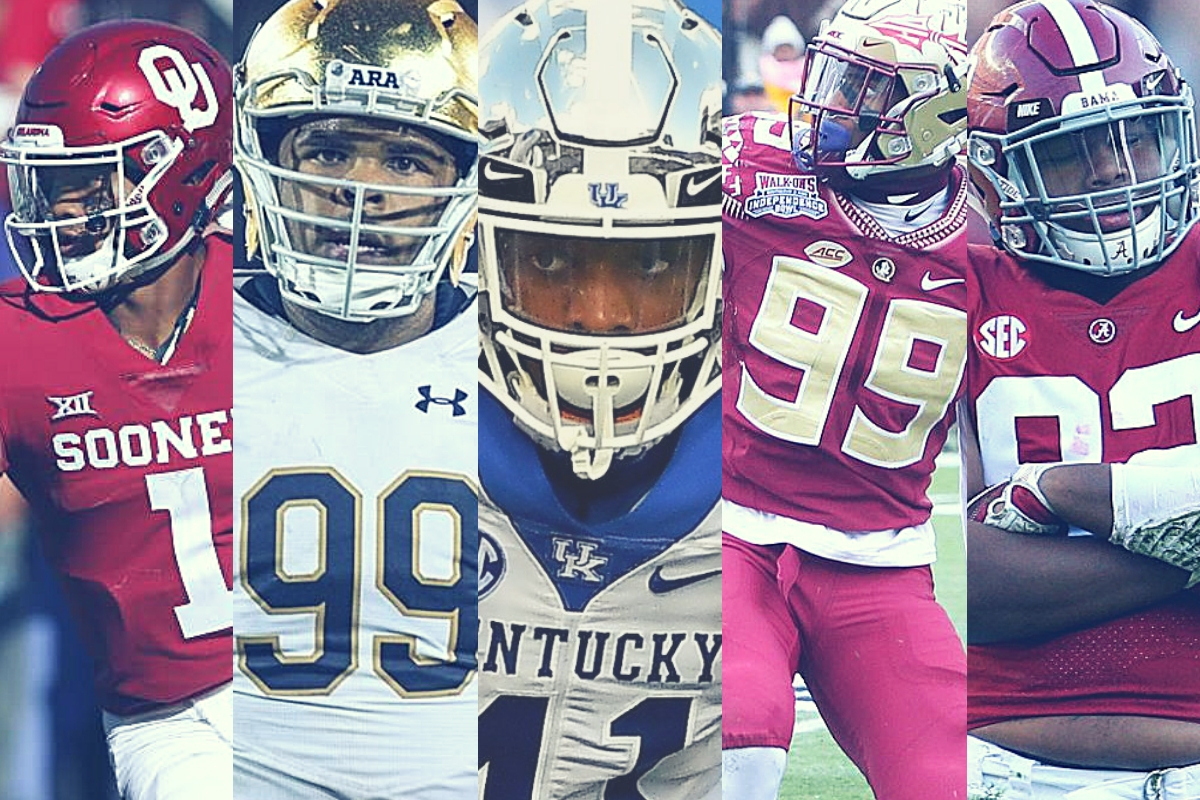 And so it’s come to this.

The NFL draft countdown can now be measured in hours and the blockbuster trades have even started early this year – so though the formal insanity won’t start until 8p this evening, the time has come for my second – and final – first round mock draft.

Oh, and just to make things even harder – or easier, depending on how you look at it – I’m not including trades. So here we go…

There certainly seems to be more doubt about who is going to go first overall now than a month ago, and I wouldn’t rule out the idea of the Cardinals going elsewhere or even trading out of the pick. With that said, teams generally aren’t incompetent to actually leave their decision to the last moment when it comes to the first overall pick – if the Cardinals were certain about Murray ten days ago, unless they’ve uncovered something that has otherwise remained secret, I don’t see that having changed. They could have been running months of interference just to convince people of that, but that does seem rather elaborate given that nobody can stop them from taking whomever they want. What this means for the Cardinals going forward I have no idea, but this is the most likely pick as far as I can tell.

I wouldn’t be shocked if the 49ers wanted to trade out of this pick or that they find Bosa already gone, but of the options available to them who might be seen as worthy of the second overall pick, EDGE is probably the biggest need and Bosa is at least even in terms of the general views on who the top player in the class will be. Having already traded for Dee Ford, this would give the 49ers a pair of good pass rushers to pair with some nice interior and second-level pieces as the core of a defense that really needs to be better going forward.

The Jets aren’t a very good team and they are in a position where they can take the top player on their board pretty much regardless of position; while I think offensive line might also get a long look here, Williams is arguably the best player in the class and a good fit with their defense. This is a team that is still pretty early in the rebuilding process, but getting a potential foundational piece in Williams would be a step in the right direction.

I’m not even sure who is making the decisions for the Raiders right now, let alone what that person’s thinking might be, but they clearly need help at edge rusher having jettisoned almost everybody with a sack to their name during the past year, and with Bosa and Williams off the board, Allen is likely the best pass rusher still available. I honestly can’t tell whether the Raiders think that they are retooling for a playoff run or just going about rebuilding in a fun new way, but whichever one they’re doing, they need to improve their pass rush.

The Bucs are another team that could go a lot of different ways, with offensive line and pretty much everything on defense being options, but while the Bucs got young at cornerback last offseason, they didn’t get very good – Murphy is the top cornerback on many boards around the league. The Bucs are yet another team that could look to move back – there’s a theme emerging here – but if they do pick at five, it’s likely to be whichever defensive player they have rated the highest. I think Murphy would be the first of many surprises we’re going to see tonight.

Who knows what the Giants are doing right now, but Oliver’s stock seems to be on the rise after having been very hot and cold to this point, and the Giants are certainly a team that could do with some defensive line help – among other things. Oliver can improve their run defense right now and has certainly got great potential as a pass rusher, and we know how many pass rushers Dave Gettleman would be happy with…

The Jaguars have to be in win-now mode given the young talent they have on defense and the money they’ve just thrown at Nick Foles; whether they view Jonah as a guard or a tackle, they could do with continued improvement in both areas. I’m not as high on Williams as many, but he seems to be widely regarded as one of the two best offensive linemen in the class.

The Lions have made it clear that they are going to go with Matthew Stafford in the near future, and having now gotten him a decent pair of outside receivers, a solid offensive line and a feature back, they now need to give him somebody to throw to over the middle – while Noah Fant might have a higher ceiling as a weapon in space, if you want somebody to block well and offer value in the intermediate middle, Hockenson appears to be the man.

Regardless of whether you think Josh Allen is the long-term answer for the Bills, they need to improve their offense and that means building around him. They started doing this in free agency with a number of wide receiver additions to the couple of decent young players they already have, and the logical next step would be to double down on the offense by adding an offensive lineman than can give Allen the time needed to work the ball downfield. Taylor is another played who might be seen as different things by different teams, but would certainly fill a need for the Bills.

The Broncos could look to add yet another quarterback with this pick, but they could also commit to something of a rebuild and try and find pieces to build around. They certainly have a need at inside linebacker and given that many don’t expect White to last this far into the draft, he would likely be seen as good value at this point – his upside is certainly hard to ignore.

Up Next: The Worst-Case Scenario For Carolina…..