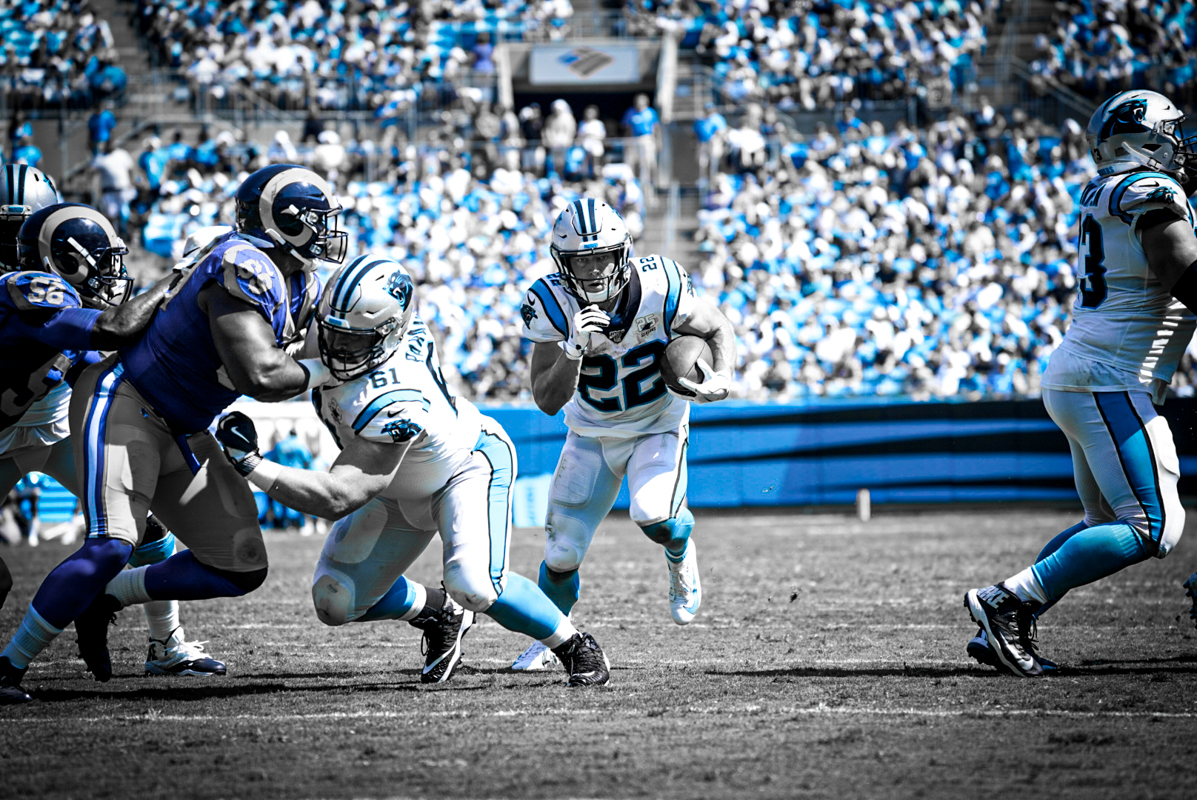 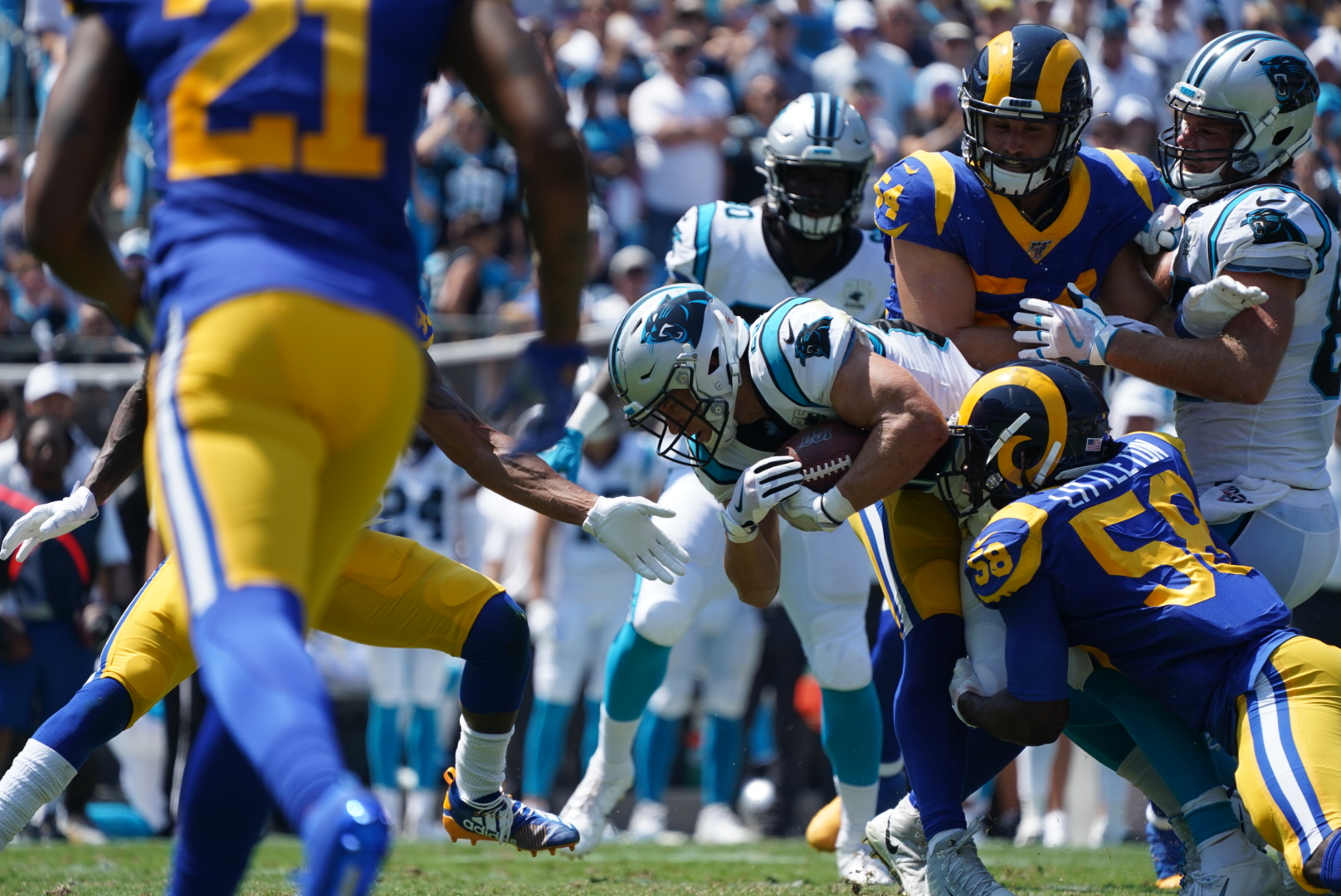 The Panthers first quarter actually had a lot of promise.

Their first drive looked exactly how the team likely drew it up – the Panthers were even catching the right bounces when a pass that was batted in the air by Rams linebacker Cory Littleton fell directly into the arms of Christian McCaffrey and the running back squirted forward for a five-yard gain. McCaffrey dominated the first drive, as well as the first quarter, as he accounted for the first 27 yards of the game, but after a miscommunication led to a sack on second down and Cam Newton hit DJ Moore along the sidelines for a first down, Moore made the same mistake he made multiple times throughout his rookie season – he had two such fumbles in a loss against Washington in 2018 – as the 22-year old refused to go down and had the ball punched out by Littleton, who then picked up the ball and fell forward to snuff out the Panthers’ first drive.

A promising drive – had Moore gone down, the Panthers would have been inside the Rams’ 30-yard line – turned into nothing in the blink of an eye. 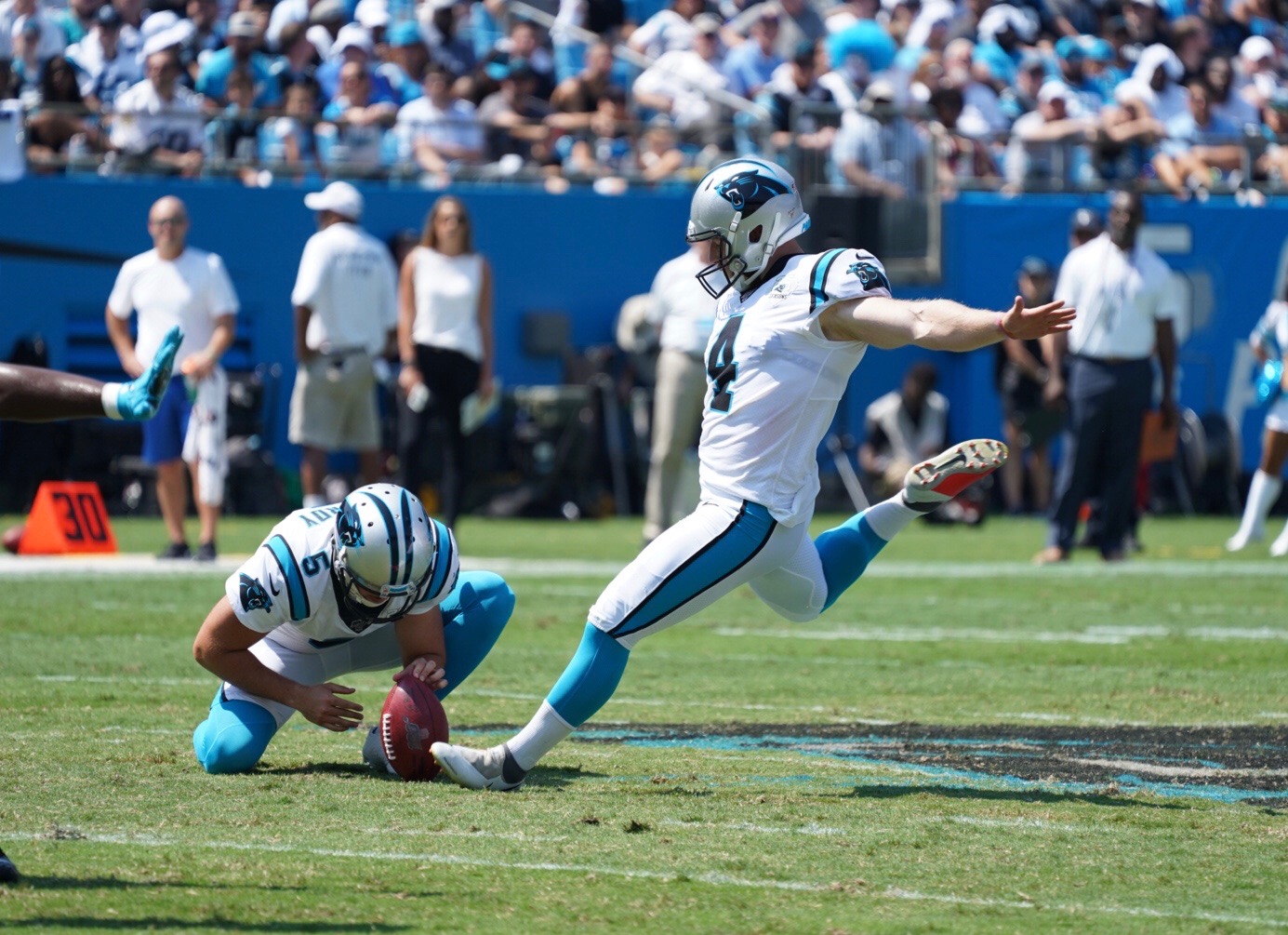 After a few three-and-outs for each team, the Panthers got the ball back at their own 25-yard line and began driving, again behind McCaffrey, who had 61 total yards on nine touches in the first quarter, but their offense again stalled as the Panthers drove inside the Rams 30-yard line. On 3rd-and-7, after taking a timeout to discuss their options, the Panthers came out of the huddle confused – it appeared that Cam Newton’s helmet communications went down as Newton came over to the sidelines as the play clock ran down and swapped out his helmet, with Ron Rivera gesticulating wildly to the referees.

A delay of game and a rush up the middle that went nowhere led to a 53-yard field goal missed by Joey Slye as the kick drifted to the right.

Two promising drives, zero points – the Panthers, who had doubled the yardage of the prolific Rams offense in the first quarter, had nothing to show for it.

Another Mistake For Moore 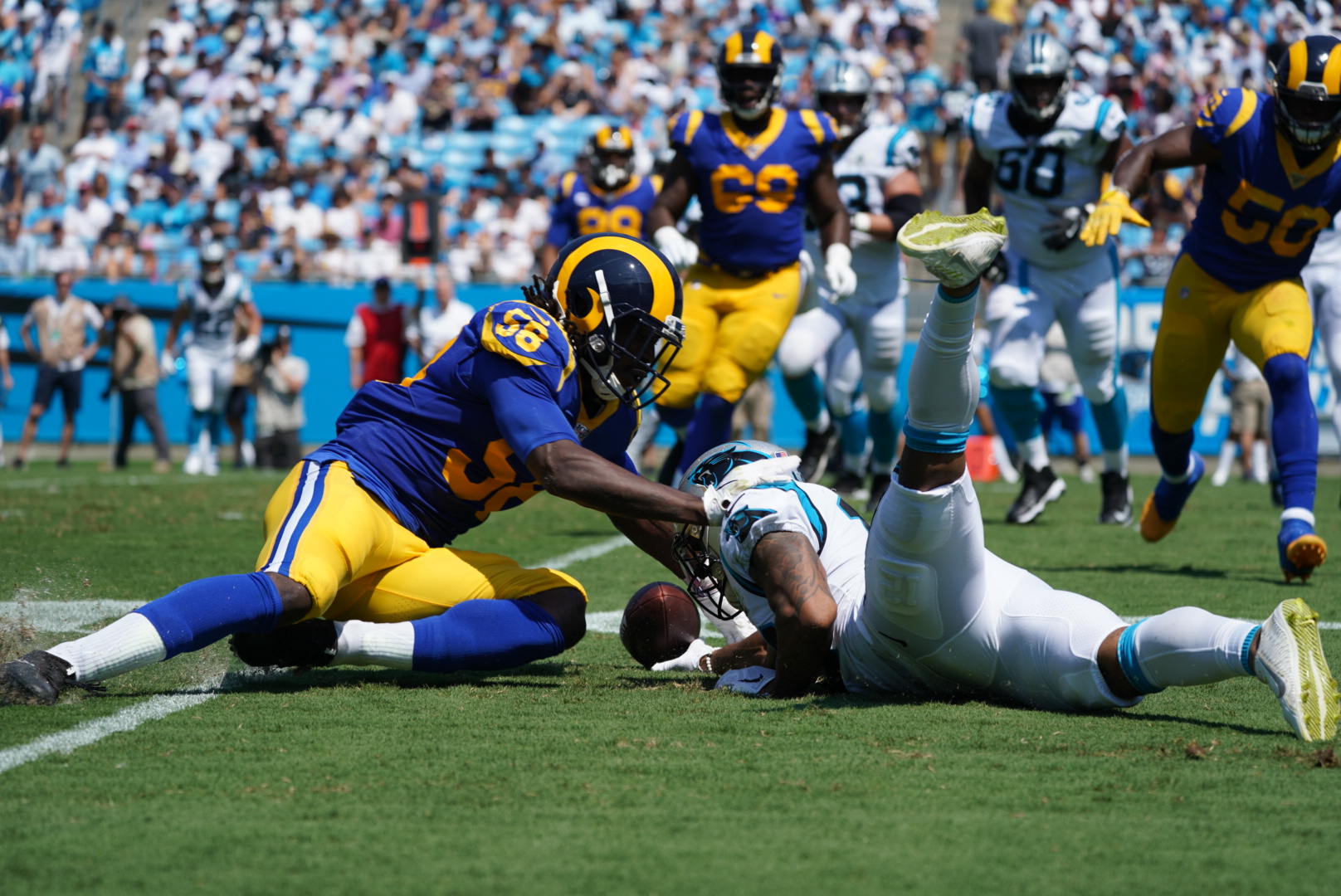 While the Panthers were able to escape their first turnover relatively unscathed – the first quarter fumble led to a Johnny Hekker punt – the second fumble, this one on a swing pass to second-year wideout Moore that was traveling backwards even as it was tipped at the line by linebacker Samson Ebukam, proved much more costly as the Rams were able to score two plays later on a five-yard run by running back Malcom Brown to put the Rams up 10-0.

At that point, the Panthers were ahead in all facets of the game, essentially dominating the game – but when you lose the turnover battle, you lose the battle on the scoreboard. 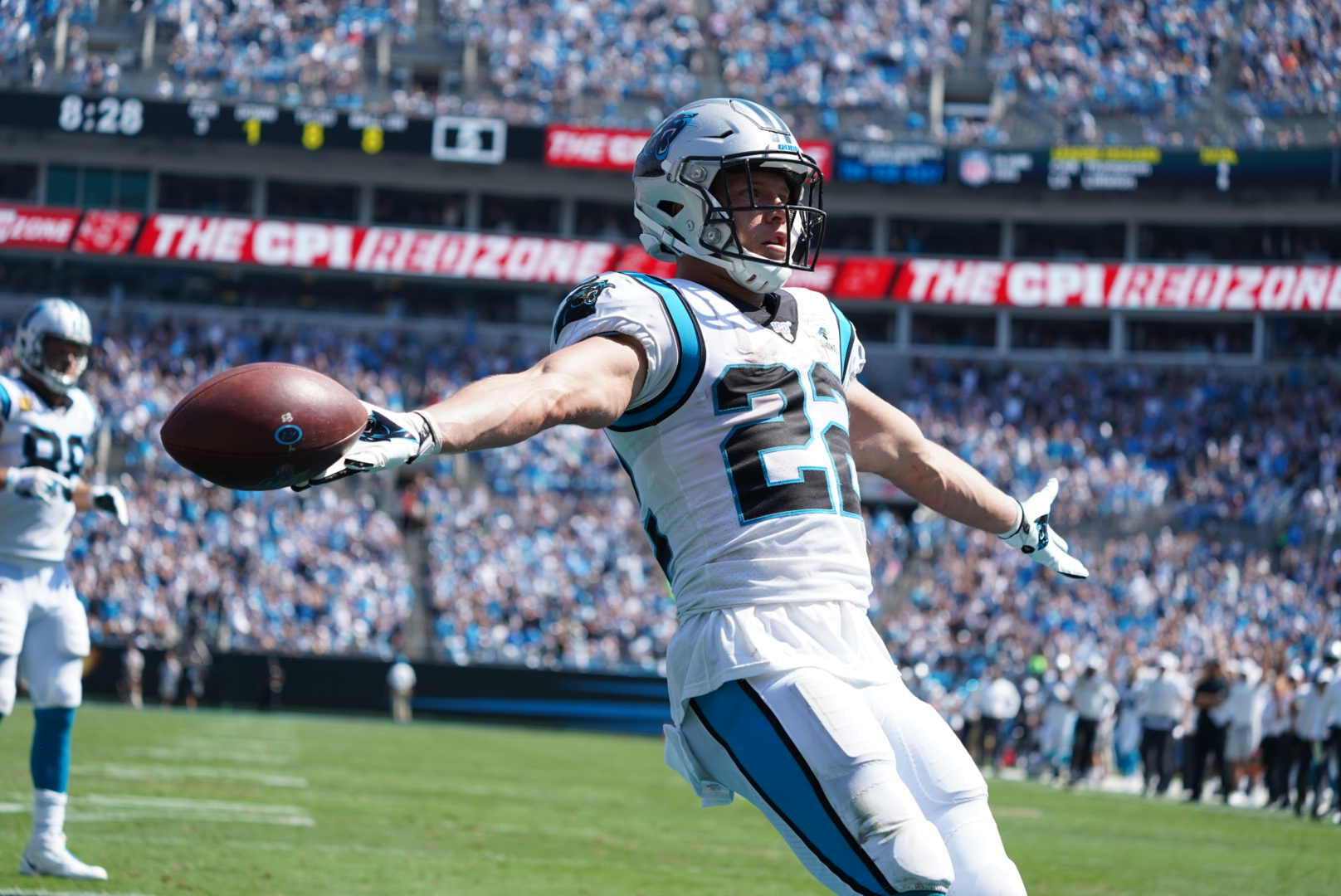 The Rams came out of halftime firing – it was clear that Sean McVay and his staff had made adjustments as their first three plays – two tosses over the middle to Brandin Cooks and an outside zone run by Todd Gurley – picked up 64 yards and had the Rams threatening. The Panthers defense stiffened inside the ten-yard line, aided by a holding penalty that backed the Rams up on second down, and held the Rams to a field goal that extended their lead to 16-3.

The Panthers started at their own 40-yard line after Greg Zeurlein kicked the ball out of bounds and went 60 yards in eight plays, including a key 3rd-and-7 conversion to Curtis Samuel for 14 yards and finished the drive with a beautifully designed play from the Norv Turner archives that saw McCaffrey swap places with Cam Newton, take the direct snap, fake the handoff to his quarterback and bolt eight yards for the score through a huge hole between Matt Paradis and Greg Van Roten to close the gap to 16-10.

After an efficient drive by the Rams that saw Los Angeles convert three third downs, including a 3rd-and-1 on the goal line that ended with Malcolm Brown running untouched into the end zone – they were 9-of-17 on the day while Carolina was only 5-of-11 – the Panthers drove 36 yards for a field goal to cut the lead to 23-13. After a Rams three-and-out deep in their own territory, the Panthers special teams made a huge play as linebacker Jermaine Carter, Jr, who was seeing a fair amount of playing time next to Luke Kuechly and Shaq Thompson when the Panthers went to a four-man front exploited a hole in the right side of the Rams line and knifed in to block Johnny Hekker’s punt.

The huge play by the second-year linebacker allowed the Panthers to have the ball inside the ten-yard line and two plays later, Christian McCaffrey bull-rushed his way over the goal line for his second score of the game to cut the lead to 23-20.

McCaffrey was a one-man wrecking crew on offense, finishing with 128 yards rushing and two touchdowns with 81 yards receiving on ten receptions.

After a James Bradberry interception – only the sixth of his career in his 46th game – the Panthers had the ball at their own 29-yard line down by three points. After one of the few designed rushes for Newton went nowhere and Christian McCaffrey managed only four yards on a pass over the middle, the Panthers had a key third down. Curtis Samuel, the MVP of training camp who coaches, media members and teammates alike said had made a huge leap before his third season, streaked downfield towards the right sideline with plenty of green space around him in between the safety and a trailing corner.

And Cam Newton missed him, overthrowing the receiver as the ball landed harmlessly along the Panthers’ sidelines.

Newton, who would also throw an interception late that would appear to seal the game and finish with 239 yards on 25 completions, overthrew the speedy wide receiver and the Panthers punted the ball back to the Rams – who promptly went 57 yards the other way and scored a touchdown to put them up two scores with less than seven minutes left, a deficit the Panthers ultimately could not recover from.

A late touchdown would not prove enough as the Panthers would ultimately fall 30-27 to the defending NFC Champs.