Five Plays That Mattered As The Panthers Beat The Cardinals 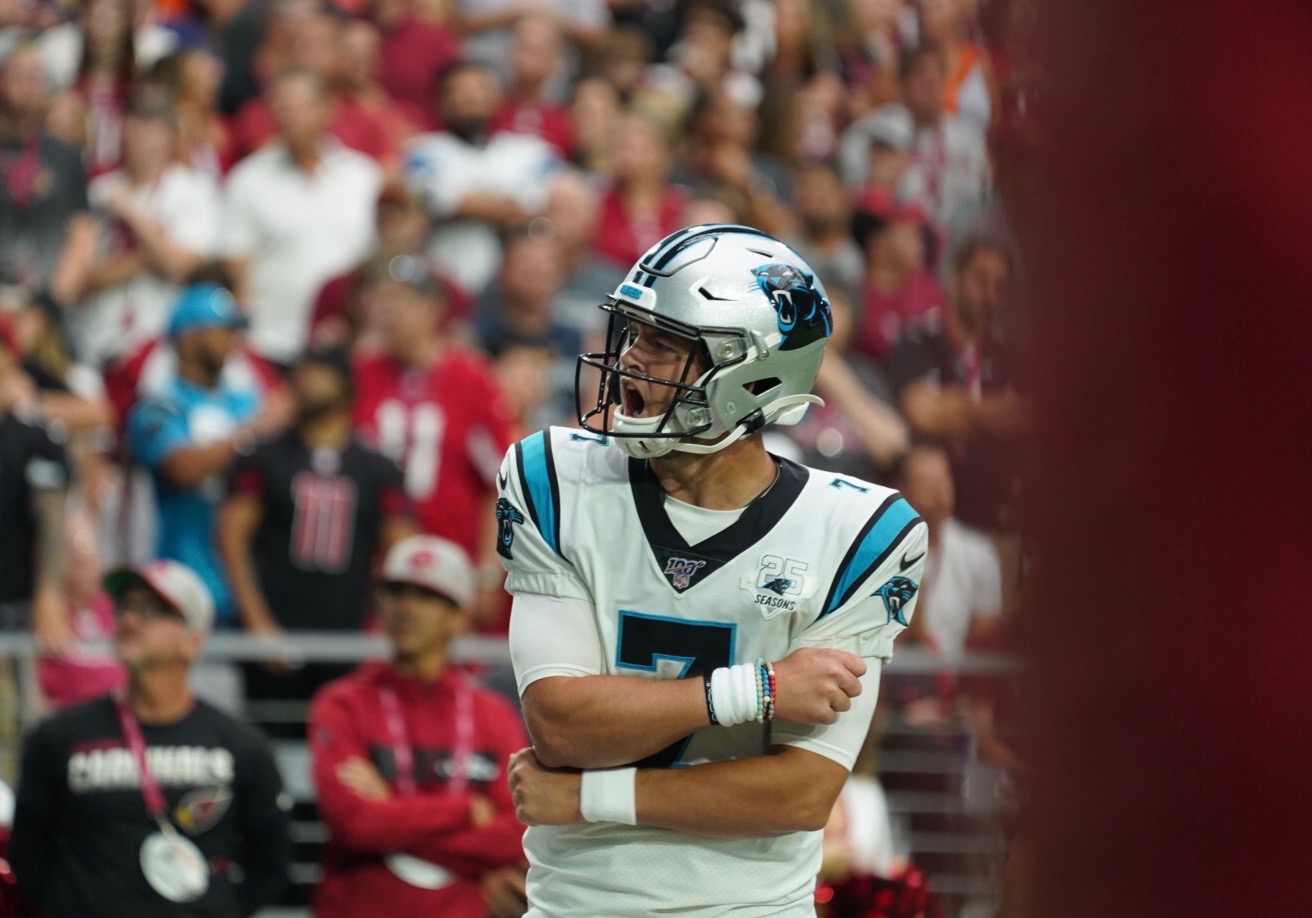 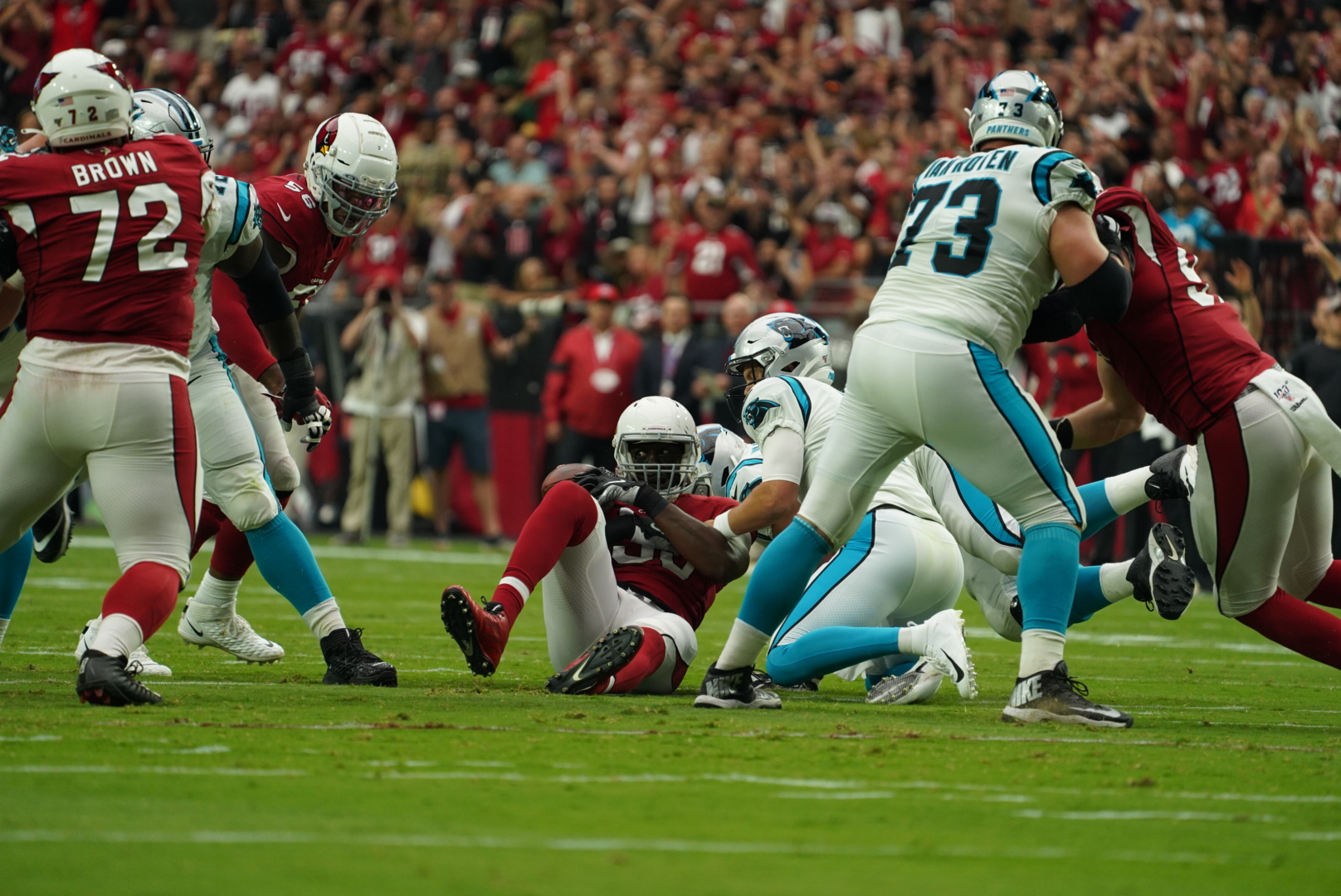 For the third consecutive game, the Panthers had a promising first drive, only to see it derailed by a turnover.

With Kyle Allen starting for an ailing Cam Newton – his sprained foot kept him out of practice this week and may keep him out for a few games still – Allen began the game effectively, picking up where he left off in Week 17 of last season as the opening drive of the game used an effective mix of rushing and passing. Allen began 3-of-4 for 38 yards and Christian McCaffrey picked up 17 on the ground as the Panthers quickly drove into the Cardinals’ red zone – those good vibes came grinding to a halt as Cardinals edge rusher Chandler Jones beat right tackle Taylor Moton off the edge and poked the ball away from Allen and recovered the ball at the 26-yard line.

Kyler Murray and the Cardinals – who employ the fast-moving, no-huddle ‘Air Raid’ style offense – pounced on the opportunity and went 74 yards in 14 plays and punched the ball in on a Larry Fitzgerald screen pass to go up 7-0 early in the first quarter. The Cardinals would convert all three of their third downs on their opening drive, including on the touchdown; getting off the field would be a problem for the Panthers in the first half as the Cards’ offense would convert seven of their 10 opportunities on third down.

Allen Gets It Back 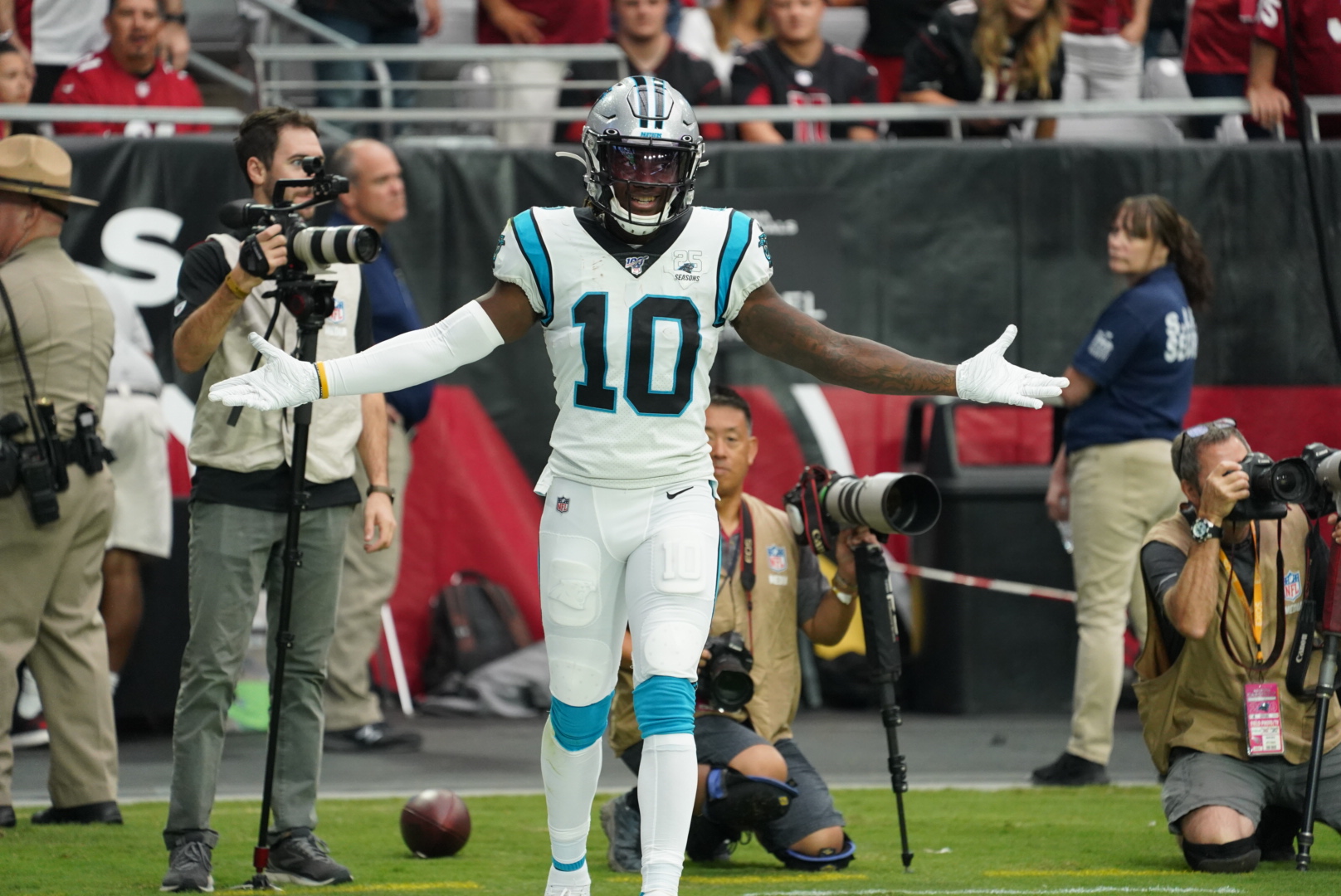 Allen and the Panthers offense picked up right where they left off as they put together an 11-play, 75-yard drive that ended with Curtis Samuel turning around cornerback Byron Murphy in the back of the end zone and catching a five-yard touchdown as Allen showed poise in the pocket, rolling to his right to avoid pressure from Terrell Suggs and putting the ball between the 1 and the 0 on Samuel’s chest on the run.

The Panthers, who hadn’t scored a touchdown on their previous four trips into the red zone dating back to Week 2 – and hadn’t scored a touchdown period in five quarters – needed a score to not only keep up with the Cardinals quick, high-powered offense, but give their defense a chance to rest, which was what they did as the drive, aided by a 15-yard horse collar penalty on Chandler Jones, took up only 5:21 on the game clock but kept the Panthers defense off the field as Carolina converted two third downs of their own, including the touchdown which tied the game at seven.

Allen was forced to drift to his right as left tackle Daryl Williams, who had a poor performance against Shaq Barrett in Week 2, allowed Suggs past him – rookie left tackle Greg Little, active for the first time, would play the rest of the first half at left tackle. Williams would start the second half on the offensive line as the Panthers rotated the two linemen with Little subbing in for Williams midway through the third quarter.

Allen was masterful in the game – finishing 19-of-26 for 261 yards and four touchdowns with a quarterback rating of 144.4. 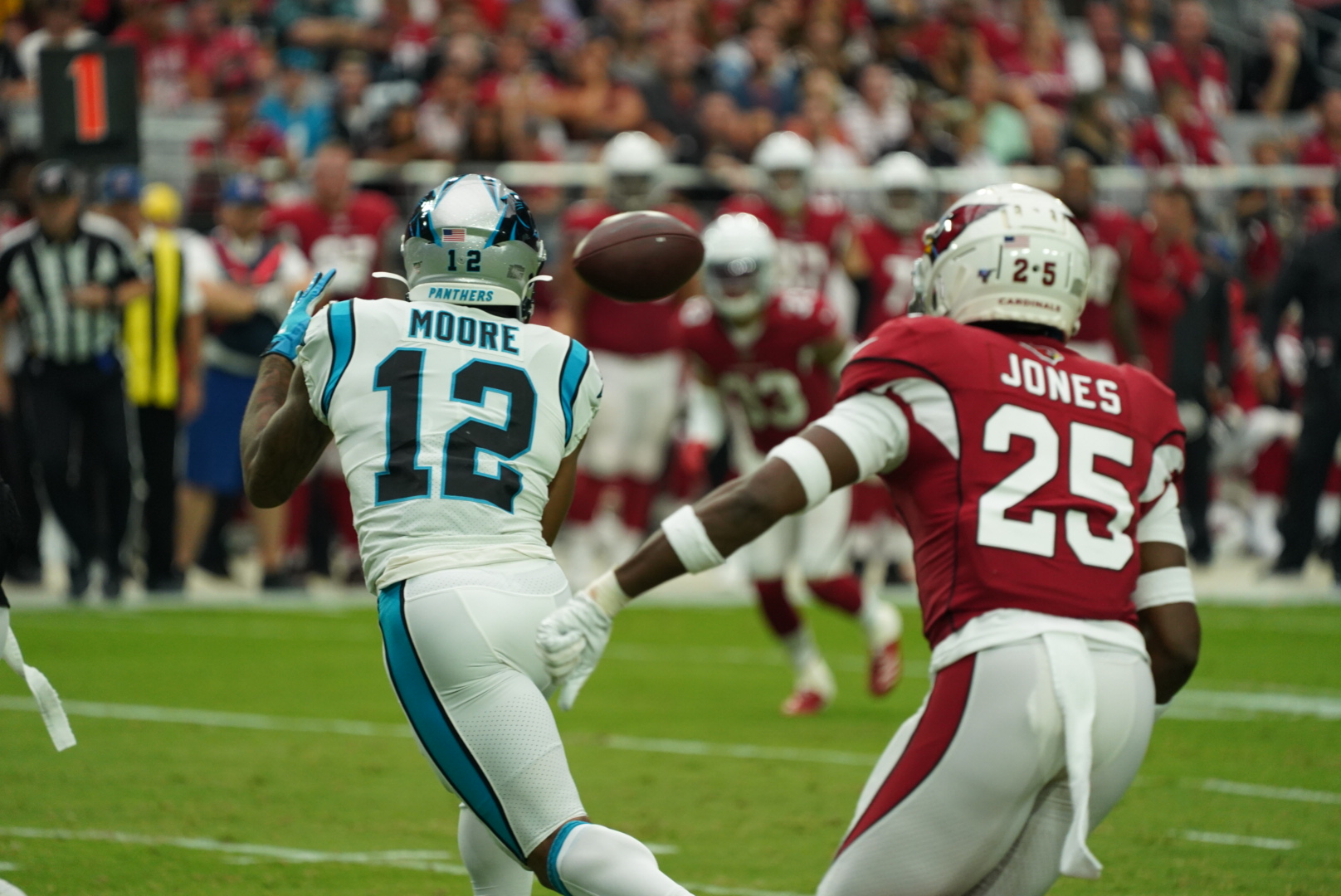 After holding the Cards to a field goal – their drive near the end of the first half took 15 plays to go only 38 yards – a consistent issue for Murray as his 11 first half completions only amounted to 67 yards total, the Panthers called timeouts near the end of that drive to give Allen another shot with the ball – Allen needed only three  plays to get the Panthers a halftime lead as the third was a strike over the middle to DJ Moore on a beautifully designed play that had Jarius Wright and Curtis Samuel causing a lot of traffic over the middle and once Moore caught the ball with a lane to the outside – that was all the speedy wideout needed as the Panthers’ 52-yard touchdown was Moore’s third of his career – and his second of over 50+ yards.

Get The Balls In The Hands Of Your Playmakers 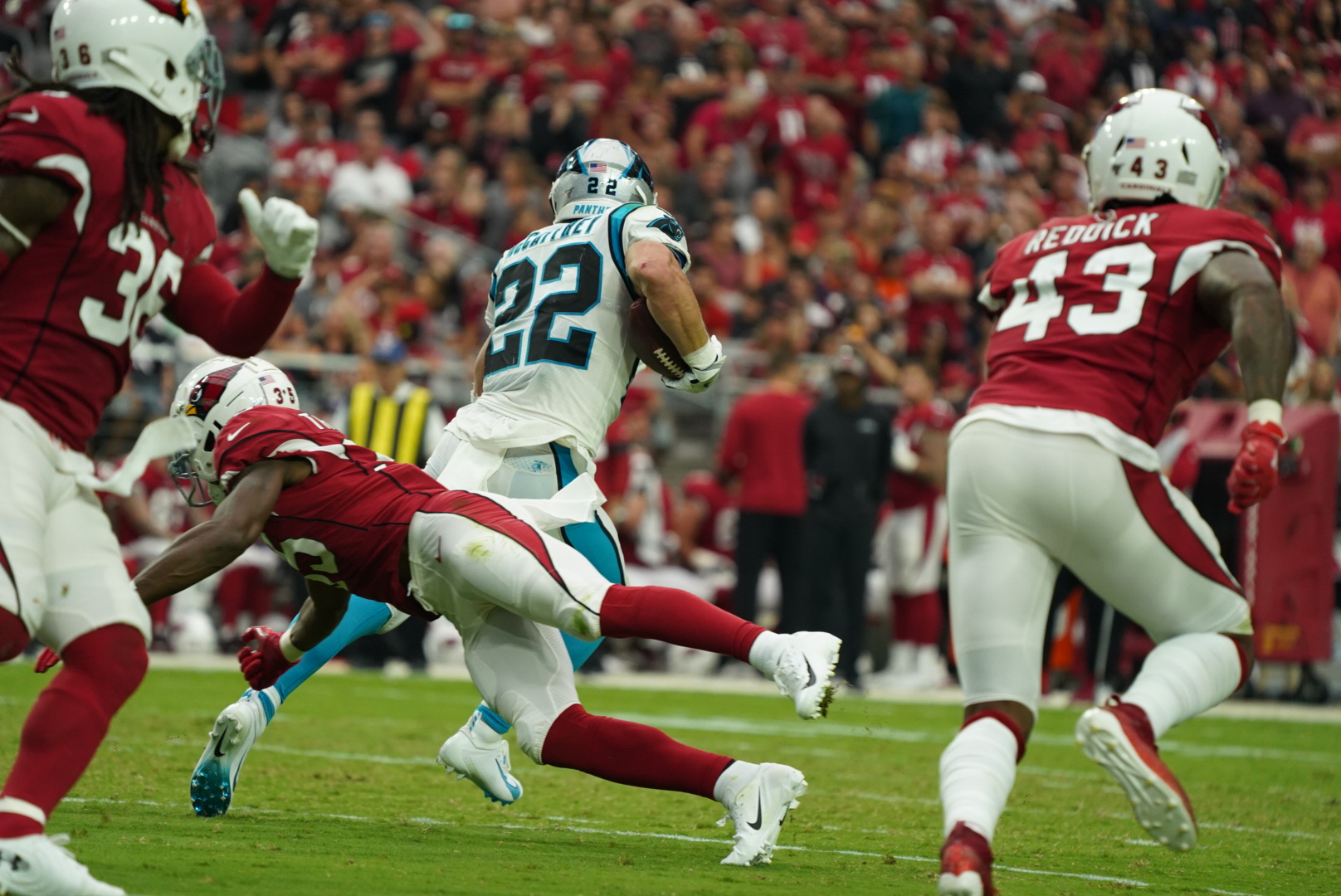 After dueling touchdowns by the former teammates Allen and Murray – Murray took the first drive of the second half quickly downfield, using his legs as well as his arm, to put the Cardinals up 17-14 with a three-yard touchdown pass to David Johnson in which the rookie QB scrambled to his right and went back to the left side of the field to his running back, who juked a diving Donte Jackson and squirted into the end zone for the score and Allen found Greg Olsen wide open on the left side for the score seven plays later – Christian McCaffrey would make his entrance.

Olsen would later catch his second touchdown pass to ice the game during the fourth quarter and would finish with six catches for 75 yards – that would make for 12 for 185 yards in the past two weeks.

After being bottled up in Week 2, Christian McCaffrey was quietly having a nice game against the Cardinals until his game got a lot louder as he screamed through a hole up the middle and had one man to beat – rookie safety, fifth-rounder Deionte Thompson – and —– well….

McCaffrey, who had 209 total yards in Week 1 and only 53 yards last week, totaled 188 yards on 27 touches and put the Panthers up 28-20 with the longest run in Panthers’ franchise history – a lead they would not relinquish. 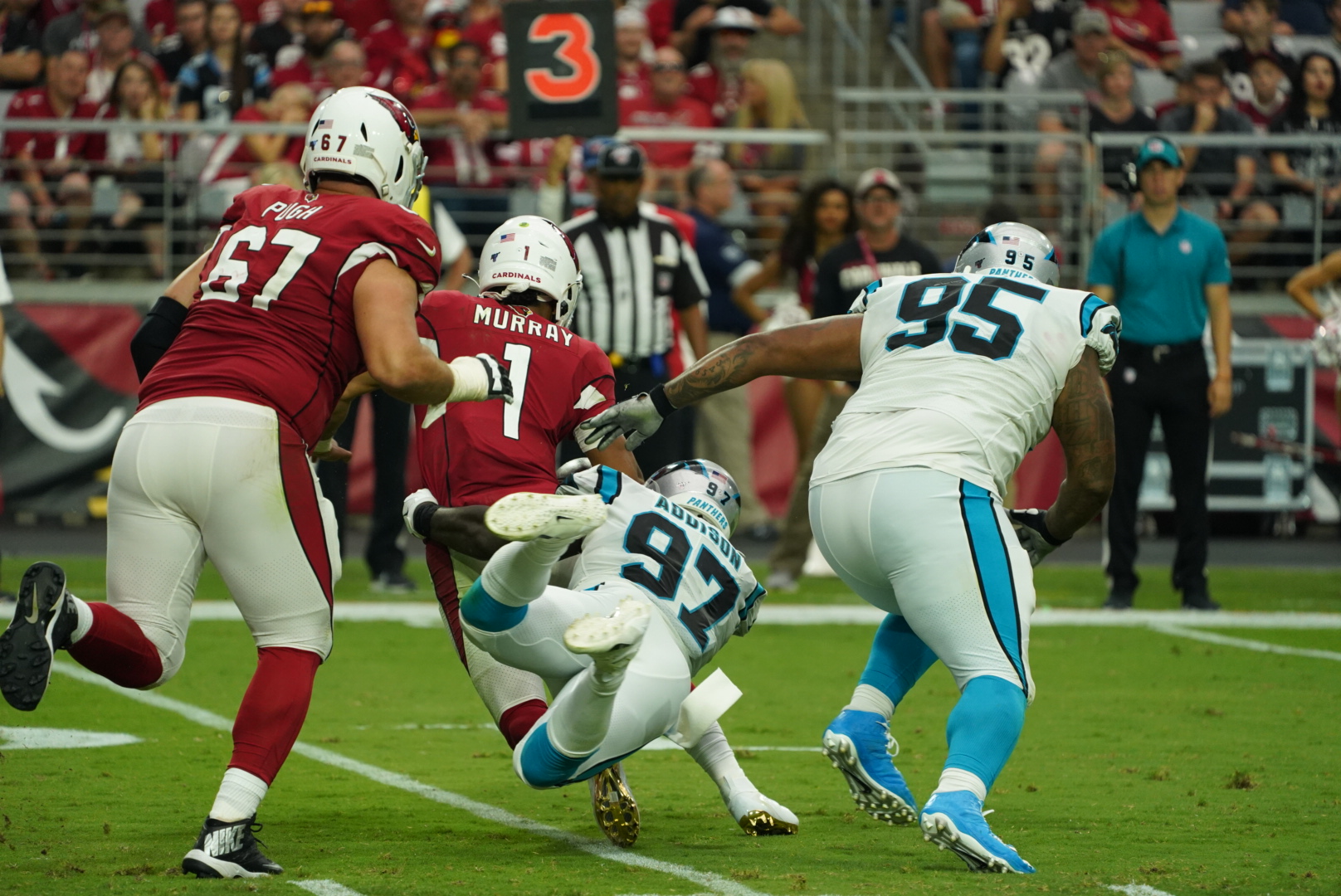 Pick which sack you like best as the Panthers defense, which had only three sacks in the first two weeks, racked up eight – including three by Mario Addison and two by Christian Miller – as the Panthers defense ratcheted up the pressure after the Cardinals scored to open the second half. After allowing 119 yards and 10 points on the first two drives, the Cardinals would only have -12 total yards – and two interceptions, both by Donte Jackson – on their next five drives. The Panthers knew that pressure would force Murray into making mistakes and they had to take advantage – that’s exactly what Jackson did as he had the second two-interception game of his career.

The eight sacks in a game was the second-most in Panthers’ franchise history and were a huge part of the Panthers 38-20 victory to get them to 1-2 on the season.