Four Plays That Mattered As The Colts Blow Out The Panthers 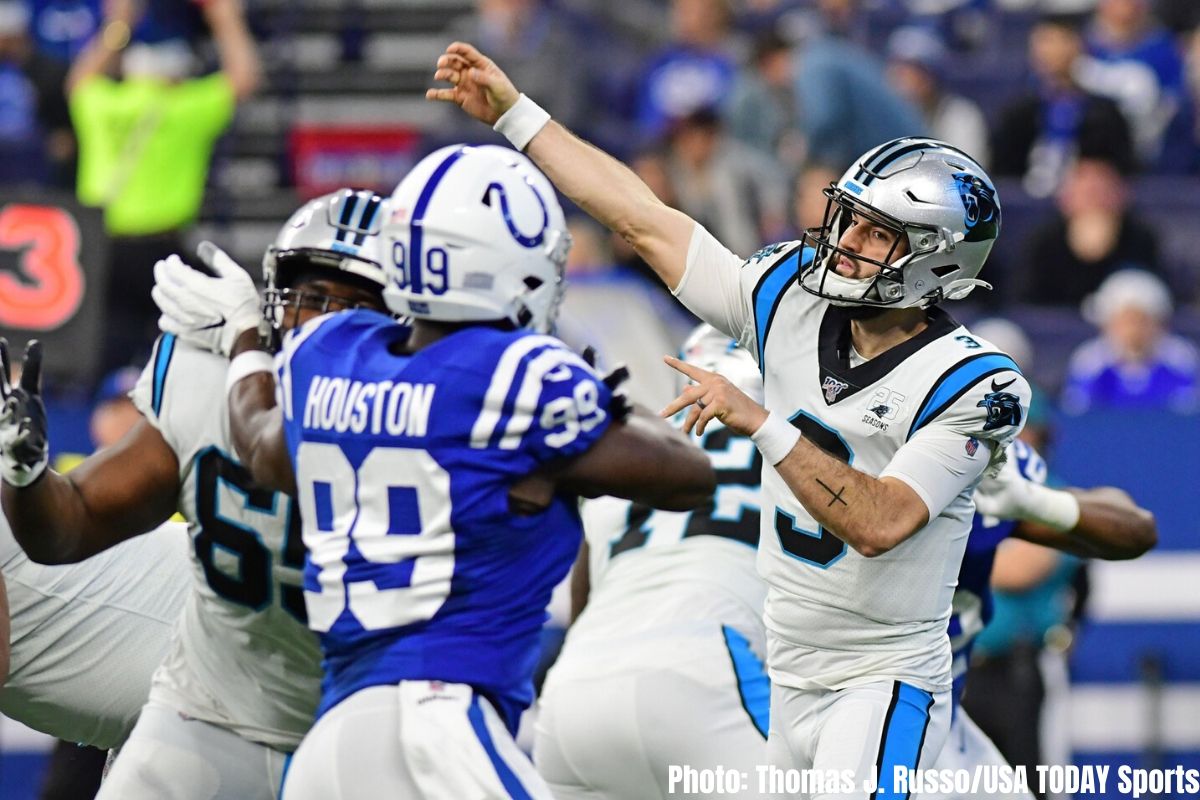 The Panthers are playing more for draft position than anything else as they slowly creep farther and farther down the draft order, beginning Sunday of Week 16 selecting tenth and not showing a whole lot of interest in getting further from the top as they inch towards a top-6 pick.

Carolina never recovered from a 14-0 deficit in the first quarter, Will Grier had an up-and-down – mostly down – day in his debut and Christian McCaffrey recorded another huge day in a spectacular season as the rest of the team crumbles around him and his team fell 38-6 to the Indianapolis Colts for their 10th loss of the season against five wins.

The Panthers couldn’t get much going to begin the game – the Will Grier Era begin with a three-and-out.

But it wouldn’t be Grier’s fault that the Panthers fell into a deep hole as their special teams failed them early – twice.

Nyheim Hines recorded a 40-yard punt return on the Colts’ first touch of the day, which put the Colts offense at the Panthers 36-yard-line to begin their opening drive. Indianapolis attacked Carolina’s weakness – run defense – as running back Marlon Mack rushed the ball three times for 12 yards and an ill-timed third-down offsides penalty on Eric Reid – a penalty that has stung the Panthers multiple times during their losing streak – gave the Colts a fresh set of downs before Indianapolis would find the end zone on a one-yard sneak by Jacoby Brissett. The extra point gave the Colts an early 7-0 lead.

For the third consecutive week and the ninth time this season, the Panthers failed to get on the scoreboard first – the Panthers are 1-8 in those instances.

After another three-and-out (the Panthers only managed four yards on their first drive), the Panthers would be forced to punt twice after a Donte Jackson – benched on the outside for veteran corner Ross Cockrell and only playing special teams snaps – illegal formation gave Nyheim Hines another chance to make a play.

After the punt coverage got stacked up, Hines found a seam and zoomed 84 yards for a score to put the Colts up 14-0 in the first quarter, the second time the Panthers had been down by two scores in the first quarter in the past two weeks. Entering Sunday’s game, Hines had just returned four punts for 66 yards on the season. In two returns, Hines recorded 124 yards and a touchdown.

In the fourth quarter, the Panthers would give up their second punt return score of the day – the first time the team had given up two punt returns for a score since 1997 – as Hines would scamper 71 more yards to put the nail in the coffin.

Read on to see the stuff that happened in between – if you dare.

Where There’s a Will, There’s The Same Mistakes

Carolina finally got on the board early in the second quarter as Joey Slye converted on a 27-yard field goal – after starting the game 1-of-4, Grier settled down for a few drives and led the Panthers inside the red zone twice as he went 8-for-13 for 94 yards on the ensuing drives but could only manage the Slye field goal.

However, their defense didn’t exactly help as Indianapolis went on a nine-play, 75-yard drive that resulted in a two-yard Marlon Mack touchdown run. Stopping the run has been a significant problem for the Panthers this season, in particular in goalline situations. The 29 rushing touchdown allowed is the most in the NFL this season; only four teams have allowed more in the past 50 years.

The Panthers are also allowing 140.2 yards rushing per game – the Colts would finish with 220 yards rushing, Mack with 95 yards on 16 carries alone.

The first half of Grier’s career wasn’t one for the highlight reel – but there were flashes of impressive play, from good decisions to throw the ball away to nicely placed balls to Jarius Wright and Greg Olsen; but right before halftime, Grier tried to do too much and turned the ball over. On a deep pass intended for Wright, Grier’s pass was intercepted by Anthony Walker – it appeared that Wright had possession first, but Walker pulled the ball away from him and although the Colts drove to the Panthers’ five-yard line, Ross Cockrell helped turn Mack away from the goalline on fourth down to keep the score at 21-3 heading to halftime.

Grier finished his first half of football 11-of-20 for 108 yards and an interception. He would finish with 27-of-44 for 224 yards and three interceptions as his second half, filled with pressure from the Colts, wasn’t much better – his two second half picks were on deep passes with the game already out of reach.

CMC You In Canton 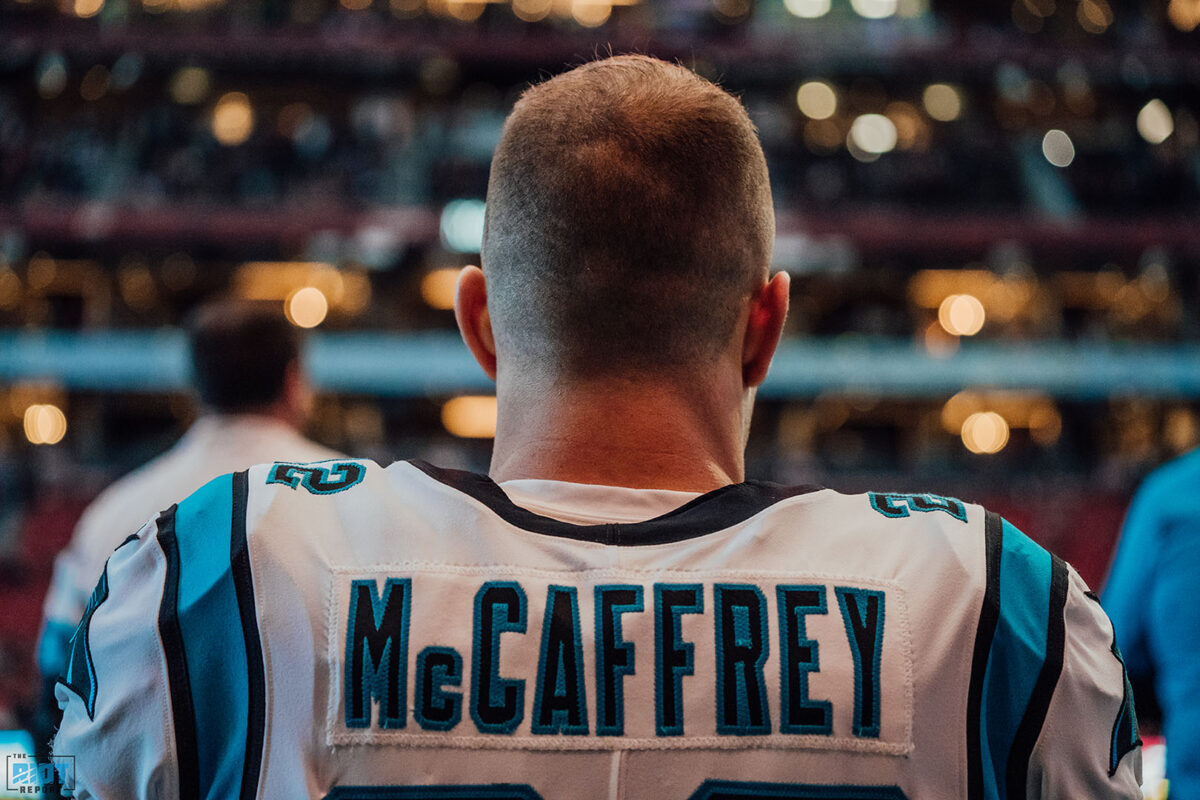 Christian McCaffrey continued his outstanding season against the Colts.

He became the first running back in NFL history to record two 100 catch seasons with his sixth catch of the day – yes, this is only his third season. McCaffrey also joined Pro Football Hall of Famer LaDainian Tomlinson as the only players in NFL history with more than 2,000 scrimmage yards and 100 receptions in the same year. He would later break his own NFL record for the most catches by a running back in one season in NFL history.

His 15 catches for 119 yards in a blowout loss were a team record for most receptions in a single game – the running back broke his own record set last season at Atlanta.

If it weren’t for the Panthers losing record, McCaffrey would be a candidate for the 2019 NFL MVP. He still has an opportunity to be only the third player in NFL history to get over 1,000 yards rushing and 1,000 receiving with a big game in the Panthers season finale against the Saints – he currently sits at at 933 receiving yards and 1,361 yards rushing with one game remaining.

Although this season hasn’t gone the way anyone would have liked, McCaffrey has clearly proven that the Panthers have one of – if not the – best running backs in the league on their roster – now it’s just going to be about surrounding him with the right kind of talent.